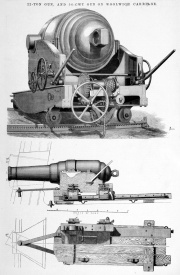 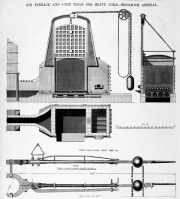 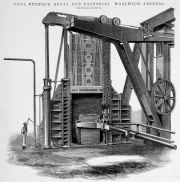 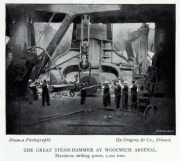 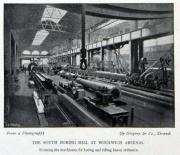 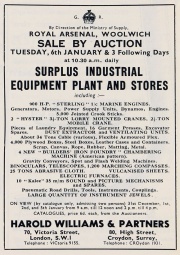 1651 The Warren at Woolwich was first used for the proving of ordnance[1].

1664 The Royal Carriage works was established at Woolwich[2]

1670 Tower Place was acquired for storage.

1696 The start of manufacturing when the Laboratory (later the Royal Laboratory) was established.

1716 The Royal Gun Factory, Woolwich, – formerly the Royal Brass Foundry for the manufacture of brass ordnance – was established.

The site of the Royal Gun Factories was Dial Square, named for the sundial at its centre[3].

1773 'An Account of his Majesty's visit at Woolwich, on Tuesday the 6th.
At a little before ten o'clock in the morning, his Majesty entered the warren (preceded by twenty-four Rope-makers dressed in white, with round hats decorated with ribbons, who had run before his Majesty's carriage from Blackheath) attended by a party of Light Horse. His Majesty stepped out of his carriage, and was received by Lord Townshend, as Master General of the Ordnance, on the parade, when he was saluted by a discharge of twenty-one twelve pounders. The Guard rested their arms, and the drums and music beat the march; the royal standard was displayed on the mortar battery, and every window filled with ladies. His Majesty passed in the front of the old invalids and the guard, to the new-erected Foundery, where Mr. Van Bruggen shewed his Majesty the various progressions of casting brass guns, such as the preparation of the clay, forming the moulds, covering the spindles, fixing the trunnions, and the motion of the fire in the furnace, occasioned by the subterraneous galleries that convey an uncommon blast of wind from every quarter. The King then entered the boring room, for boring guns cast solid, by a horizontal boring machine, extremely curious and well contrived (likewise the work of Mr. Van Bruggen) where a forty-two pounder was bored in his Majesty's presence.
From the foundery his Majesty went through the gun walk to the mortar battery, and shells thrown from mortars of various diameters, both for land and sea; some Ricochet Granadoes were likewise thrown from Howitzers.
His Majesty then viewed a very curious contrived light piece of artillery, made so as that both piece and carriage may, with the greatest care, be transported on horseback, or, on emergencies, on mens shoulders; its use and effects were tried several charges of grape shot, to the satisfaction of his Majesty and all present. This ingenious piece is the contrivance General Pattison, who explained it to his Majesty.
From thence his Majesty went to the Royal Military Academy, where he saw a very curious model of a fortification, together with the lines of approach, parallels, and saps, explained in a very military-like manner by the inspector of the Academy, Capt. Smith, who is said to have been twelve years in the Prussian service. His Majesty then viewed the drawings and other exercises of the Upper Academy, explained by Dr. Pollock, Professor of Artillery and Fortification; after which retired into the grand room of the Academy, .....'[4]

1803 The Royal Carriage Department was added.

1847 James Nasmyth was asked to provide recommendations to the Board of Ordnance about improvements in machine tools at Woolwich Arsenal, which were rapidly implemented[5].

1859 Sir William Armstrong was appointed government engineer for rifled ordnance and superintendent of the royal gun factory at Woolwich but the factory was unable to produce the Armstrong design of guns so, whilst it was being reconstructed, the Elswick ordnance factory was established exclusively to supply the government with Armstrong guns.

1887 Report by Lord Morley's committee into the Manufacturing Departments of the Army, which consisted of 4 establishments: Woolwich, Waltham Abbey, Enfield and Birmingham; the committee made a number of recommendations for reorganisation, having taken account of modern industrial practices[6].

1889 William Anderson was appointed Director General of Ordnance Factories, responsible for the ordnance factories, laboratory, carriage department and gun factory at Woolwich Arsenal, the small-arms factories at Enfield and Birmingham, and the gunpowder factory at Waltham Abbey.

1907 The Chemical Research Department was formed at Royal Arsenal, Woolwich.

1927 Activities included boring, turning and finishing of heavy gun forgings for naval use as well as lighter guns; production of field guns and artillery equipment for the Army; repairs to ordnance; training of gunners and sappers[7].

1936 The government decided that Woolwich Arsenal and Waltham Abbey would be relocated to Chorley in Lancashire, Bridgend in South Wales, and Bishopton[8].

See here for a recent 31-page account of the history of Woolwich Arsenal, with the emphasis on architectural aspects.