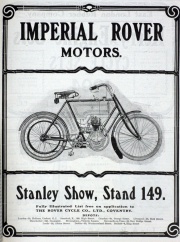 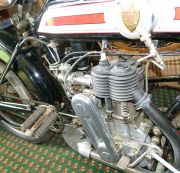 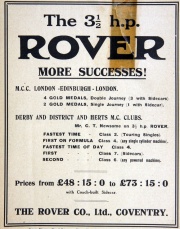 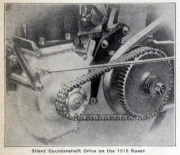 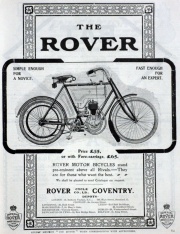 Note: This is a sub-section of Rover

1899 Having started in the cycle industry, the company first experimented with power and exhibited a machine at the Richmond Show. They built a tricar in bath-chair form, with twin rear wheels and the driver and De Dion engine fitted between them. At the front was a single small wheel and a seat for the passenger.

1903 After a gap of a few years a well-designed machine appeared. This had a single 2.25hp engine with a mechanical inlet valve and spray carburettor. The frame had two down-tubes, to increase rigidity, and braced forks.

1904 The engine increased to 3hp and there was also a 4hp forecar with the option of a water-cooled engine. It had two-stage chain transmission and included a clutch.

1905 The frame changed to a single downtube and a 2.5hp lightweight was added. The forecar remained on the list, with wheel steering as an option.

1906 The range continued for the year, but then the firm turned its attention to full-scale cars for a while.

1908-1909 Their involvement with the trade continued with the supply of complete cycle parts to the British branch of MAG for the Motosacoche Motor Unit.

1910 They returned late that year with a model designed by John E. Greenwood. It had a rear-mounted Bosch magneto, B and B carburettor, belt drive from an adjustable pulley and Druid forks.

World War I. They kept going throughout the war by supplying private owners (until 1916) and the military. Machines were produced for armies both in Britain and in Russia. They made minor changes including the option of Armstrong or Sturmey-Archer three-speed hub. (See notes)

1917 They added a 654cc JAP V-twin model for service use and that, together with the single, comprised the post-war range.

1923 The twin was dropped and a neat lightweight with a 249cc engine appeared. It had ohv and looked very modern as the three-speed gearbox was a unit enclosed by the crankcase. That model alone continued for the year 1924.

The Rover Motorcycle which has been in the family since the mid 1920s dates from 1913 and has the Sturmey-Archer three-speed hub so it was clearly an option prior to the war. The dating was provided from British Leyland several years ago based on the engine number. Attached is a picture of the motorbike in question. (See Image: 1915. TB Motorcycle.)