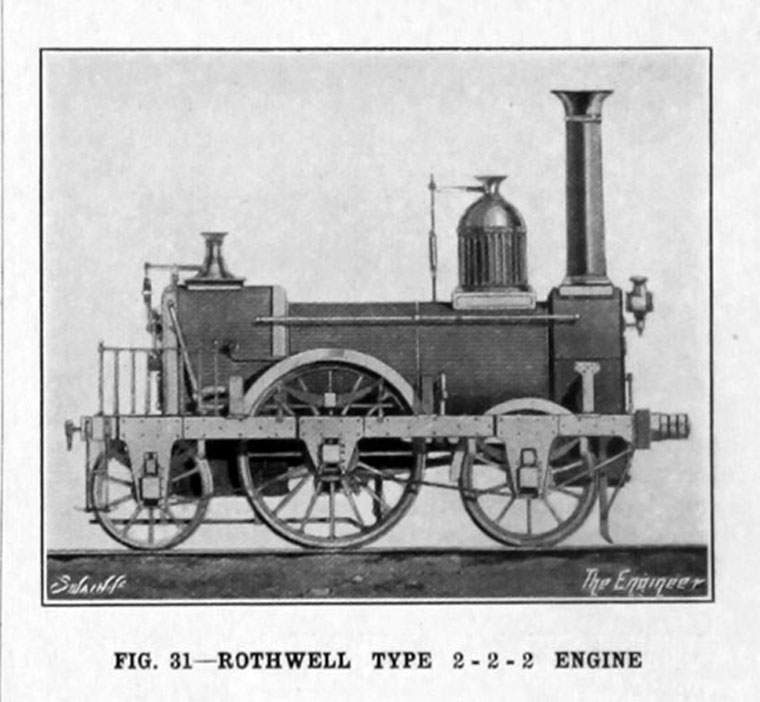 Bristol and Exeter engine of 1859.

1833 A further order for America was fulfilled; for a couple of years the firm was occupied with pumps and stationary engines.

Up to 1840 they produced fifty six, twenty eight of which went abroad; of note is a 4-2-0 for the South Carolina Railroad to the design of Horatio Allen. This had 4'6" drivers, with a swivelling front bogie, and reputed to have worked for thirty five years. A deal of sub-contract work came from Edward Bury and Co.

The quality of the company's products brought in repeat orders. Many of the engines were still in service twenty years later.

1849 Rothwell and Co supplied the dredging machinery for the first steam-powered bucket dredger on the Sharpness Canal. The dredger had a wooden hull built by local shipbuilder William Hunt[1].

Possibly the most remarkable were some 4-2-4 T engines for the Bristol and Exeter Railway with nine foot diameter unflanged driving wheels, and two ball-and-socket swivelled bogies. They weighed 42 tons and achieved speeds of 82 mph, the fastest engines of the time. Described and illustrated in The Practical Mechanic's Journal in December 1856. India rubber springs were used throughout.

From 1857 the engines were to Alexander Allan's design and were similar to the Old Crewe type. These were sold to the Lancaster and Carlisle Railway and the Eastern Counties Railway.

The last to be built were four broad gauge engines for the Bristol and Exeter Railway and two saddle tanks for the Carmarthen and Cardigan Railway.

1863 the firm was sold to Thomas Crook and Co but retained the title of Rothwell and Co.

1864 In the face of reduced business and increasing competition, the company closed. Part of the works was taken over by the Bolton Iron and Steel Co, which was later absorbed by Henry Bessemer and Co.

1866 An important contract was the pumping station at Abbey Mills in London, reported in The Engineer of January 12, 1866, which noted that "Messrs Rothwell and Co have obtained the contract for the construction and erection of eight beam engines for £54,570, and are proceeding with the work at their foundry at Bolton.". The contract also included the twelve boilers and building’s cast ironwork. The engines were removed between 1931 and 1935, being replaced by centrifugal pumps.

1874 Amalgamated under the Iron Foundry title with the Bolton Iron and Steel Co in Moor Lane. The works survived until the mid-1920s when the entire establishment was demolished to make way for the bus station.

1875 Liquidation by Arrangement instituted by Thomas Crook, of Chorley New-road, Bolton, in the county of Lancaster, Engineer and Iron Founder, and trading at the Union Foundry, Blackhorse-street, and at the Boiler Works, in Gas-street, both in Bolton aforesaid, under the style or firm of Rothwell and Co.[7]

The exact date when the firm of Rothwell and Co. of Union Foundry, Bolton was originally founded is not known, though probably it was shortly before 1830. In its earliest days the firm was known as Rothwell, Hick and Rothwell, one of the partners having been Mr Benjamin Hick, who, however, left it in 1832, when he founded the present firm of Hick, Hargreaves and Co.

In the very early days of railways the firm saw the possibilities of the demand for locomotive engines, and its first engine for railway work was built for the Bolton and Leigh Railway in 1831, which is recorded in Wishaw’s well-known work on railways as having been constructed by Rothwell and Hick. It was a four-wheeled “single”, engine with 5ft. driving wheels and 3ft. leading wheels, the cylinders being 9in. diameter by 18in. stroke. The frames were placed inside the wheels and were made of oak plates on both sides with iron. The fire-box was circular with a rounded high top, very similar to the type adopted by Edward Bury at about the same period...[more]