Grace's Guide is the leading source of historical information on industry and manufacturing in Britain. This web publication contains 143,399 pages of information and 230,040 images on early companies, their products and the people who designed and built them. 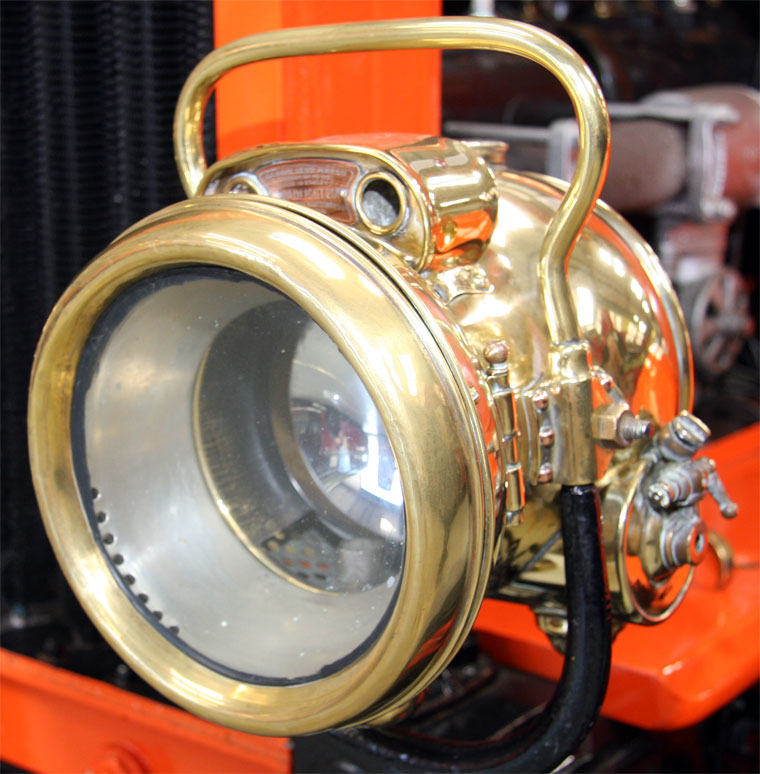 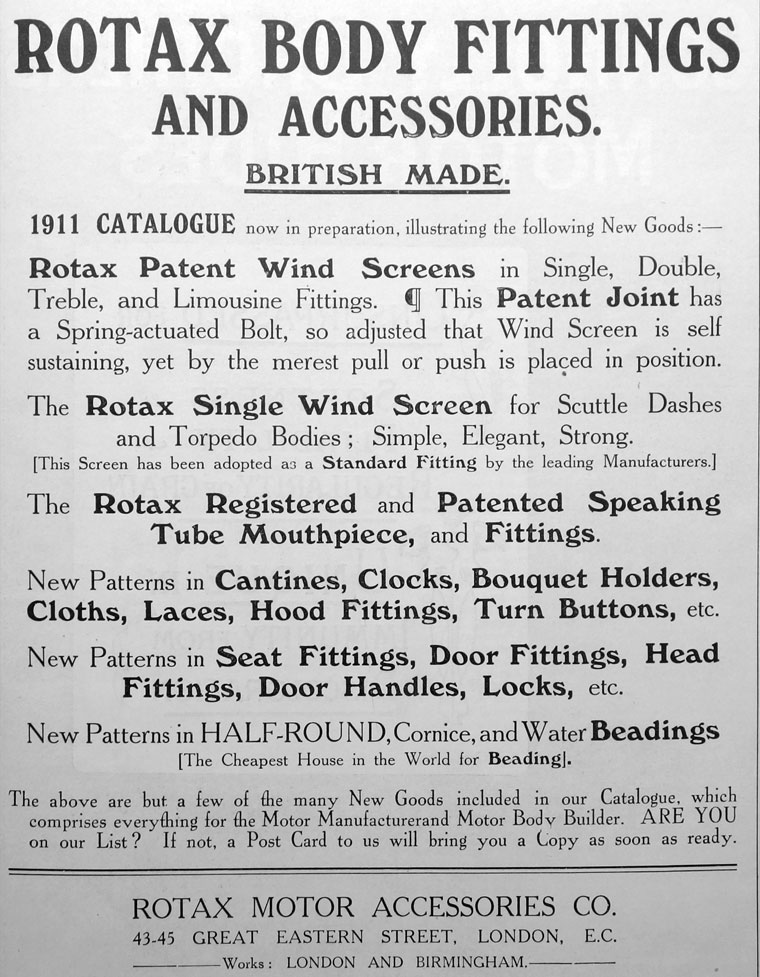 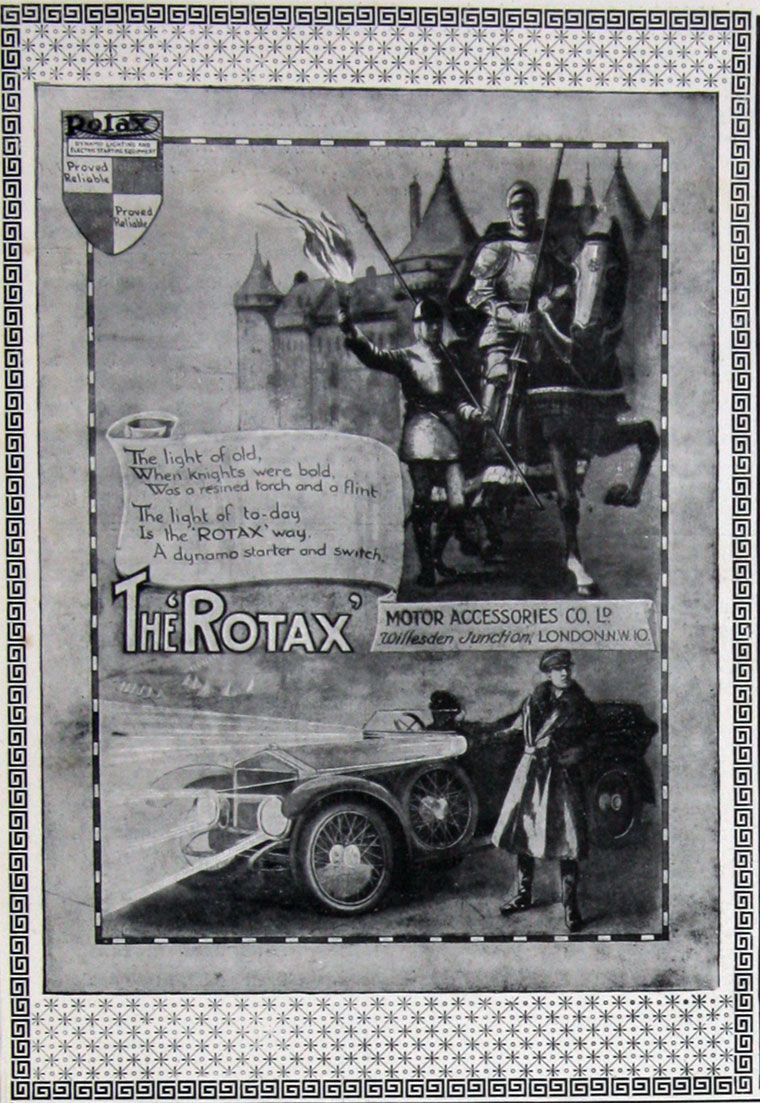 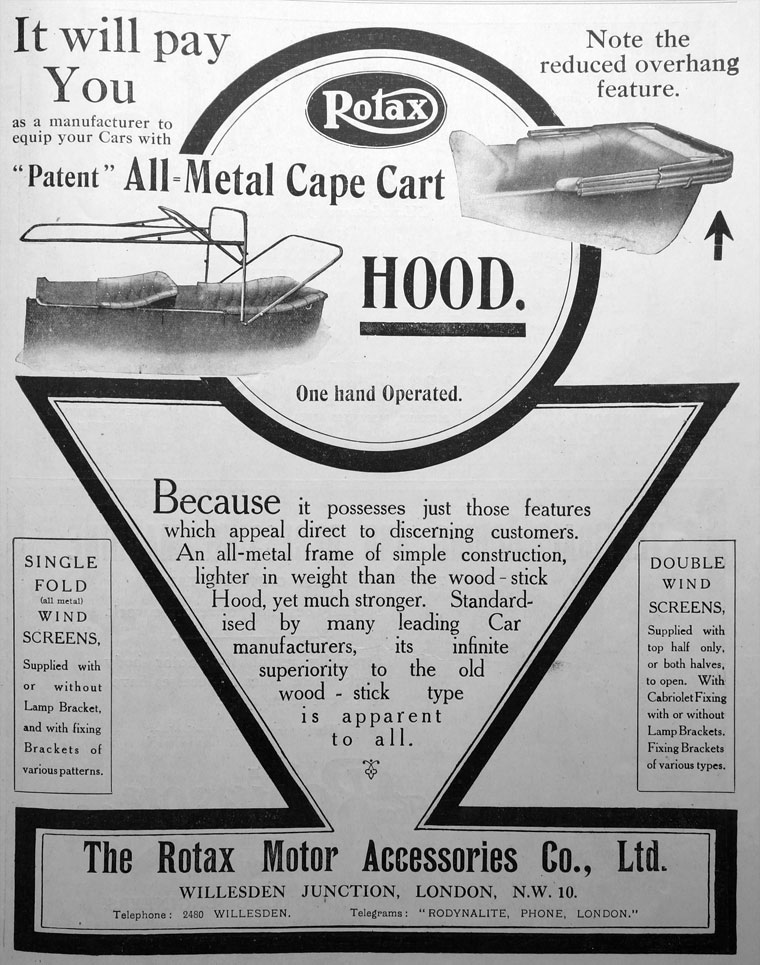 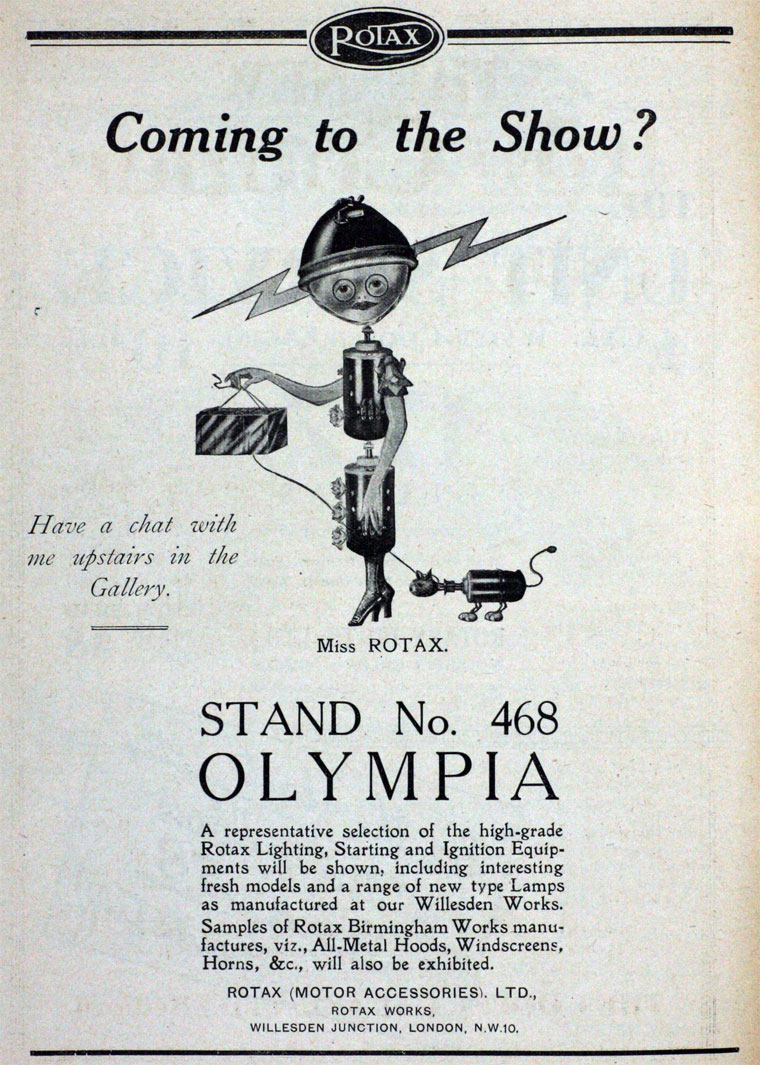 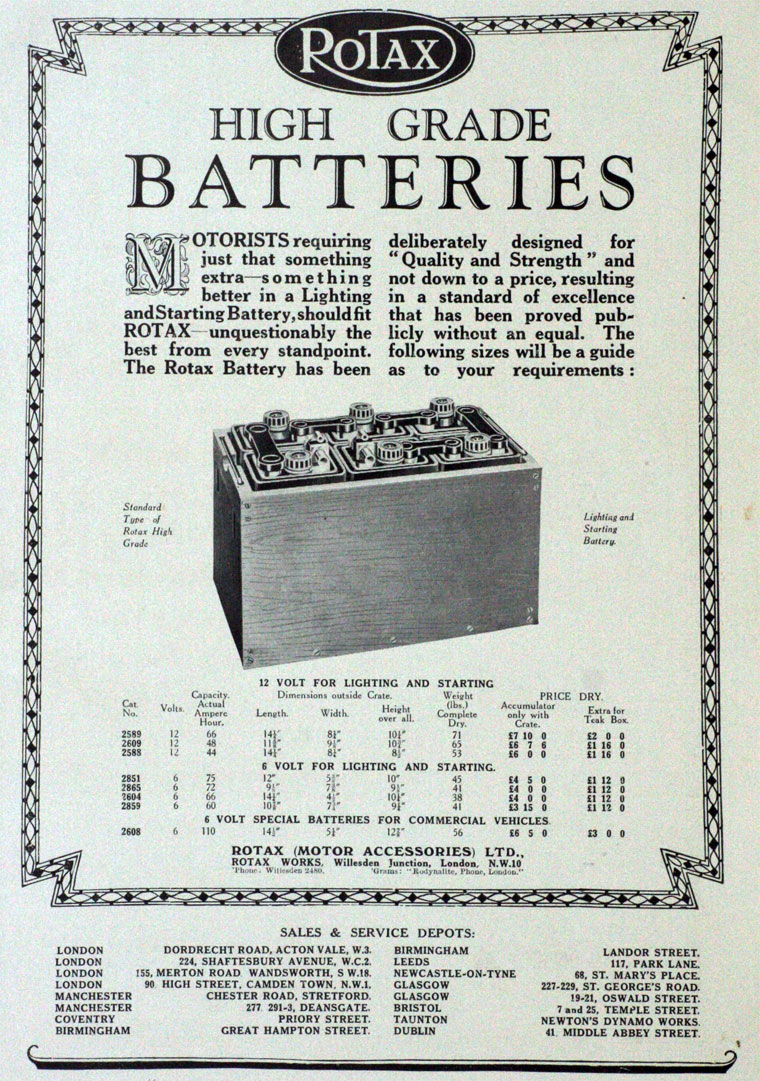 1907 Rotax Motor and Cycle Company, of 43 and 45, Great Eastern-street, London, applied for winding up of Pullcar Motor Co[1]

1917 Rotax (Motor Accessories) Ltd was formed by the brothers Eugen and Hermann Aron, with a nominal share capital of £175,000 to carry on business as a manufacturer of, and dealer in, all types of motor goods, including batteries and other electrical items. In 1917, Rotax acquired the business of H. T. Saunders and Co, Birmingham.

1920 October. Exhibited at the Commercial Motor Exhibition at Olympia with electrical lighting equipment for commercial vehicles. [5]

1921 Over one-third of the issued capital was acquired by Kynoch. In the same year they amalgamated with Newton Electrical Works, Taunton, a company in which the Aron brothers already had an interest. Lucas's records show that at about this time it was meeting keen competition from Rotax in the supply of electrical equipment for cars. Nobel Industries Ltd, through Kynoch, held a substantial interest in the re-formed Rotax (Motor Accessories) Ltd, and Sir Harry McGowan (later Lord McGowan) joined the Board.

1922 Jaeger speedometers were exhibited by Rotax (Motor Accessories); these were made in France from Swiss parts.

1923 Sir Harry McGowan is understood to have offered the Rotax business to Lucas. There is evidence that in 1923 Lucas and Rotax established some sort of working arrangement.

1925 The Arons suggested that Lucas and Rotax should jointly take over C. A. Vandervell and Co.

1925 Appointed Messrs Nibbs and Scott. as its official service agents for Portsmouth and district.[6]

1926 Nobel Industries became part of ICI. An offer to C. A. Vandervell and Co was made by Sir Harry McGowan on behalf of Lucas. The offer was accepted for a consideration of £321,745 in cash. Lucas took the view that joint management of C. A. Vandervell and Co by Lucas and Rotax would not be successful and it decided to take over Rotax also. The consideration of £707,217 for the purchase of Rotax was satisfied partly in cash but for the most part by the issue of Lucas £1 Ordinary shares. Lucas decided to concentrate manufacture of equipment for the heavier types of vehicles in C. A. Vandervell and Co and to develop Rotax for the manufacture of equipment for aircraft.

1931 the Rotax Company purchased the business of T. Harding, Churton and Co, Ltd., of Leeds,

1932 A new limited company was formed combining both Newton's and Harding & Churton as manufacturers of electrical machinery of all classes.

1933 Newtons of Taunton Ltd. made a range of DC and AC motor tools, including special high frequency tools for which the frequency converters were made at Taunton, with the tools themselves being constructed at the firm's Rotax works, Willesden.[8]

From this time Rotax Ltd, a wholly-owned subsidiary of Lucas, was concerned principally with the production of equipment for aircraft.

1971 Became part of Lucas Aerospace when this was established