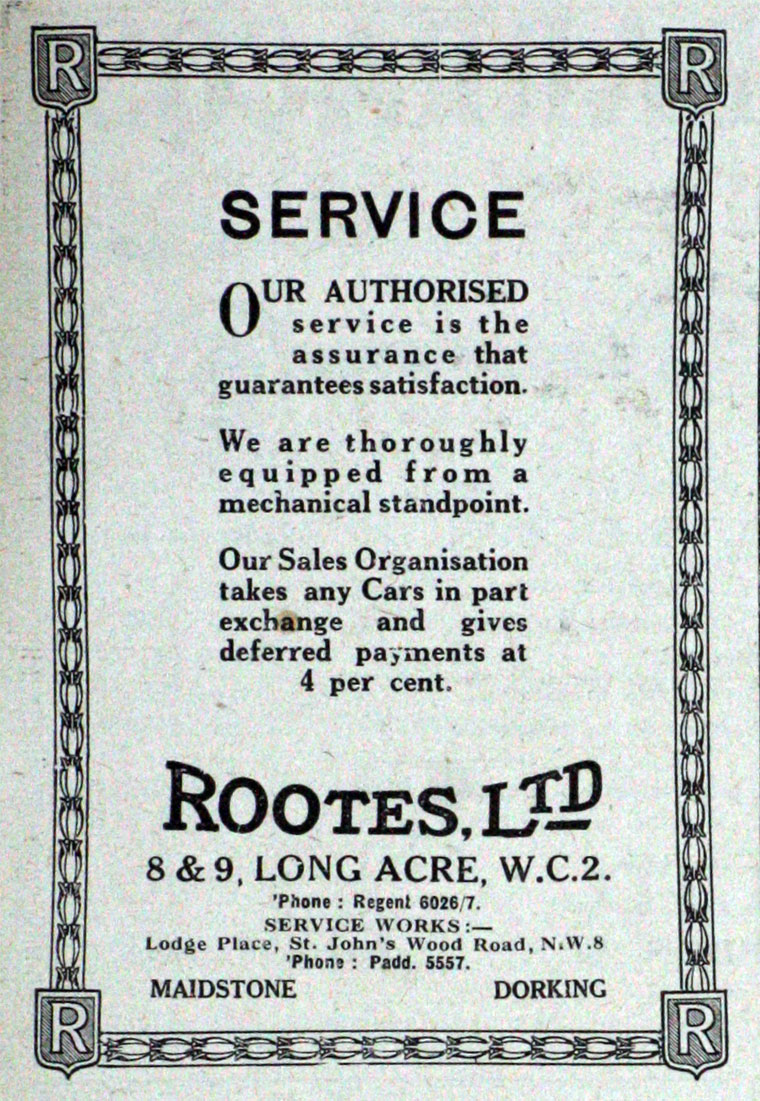 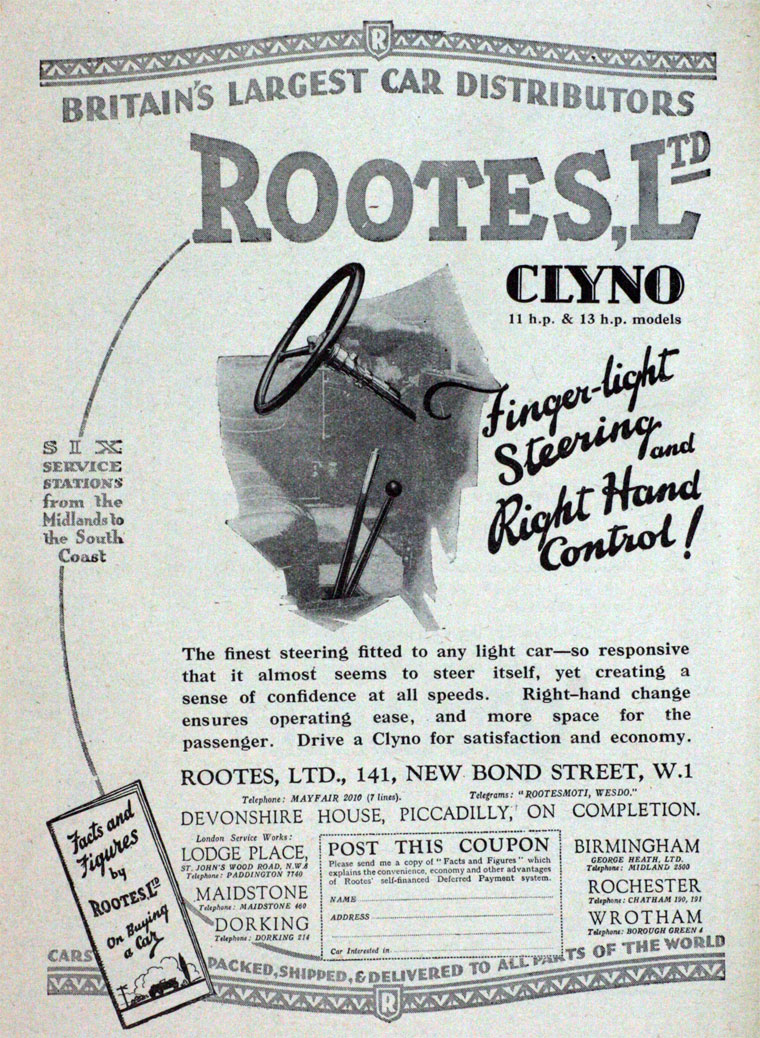 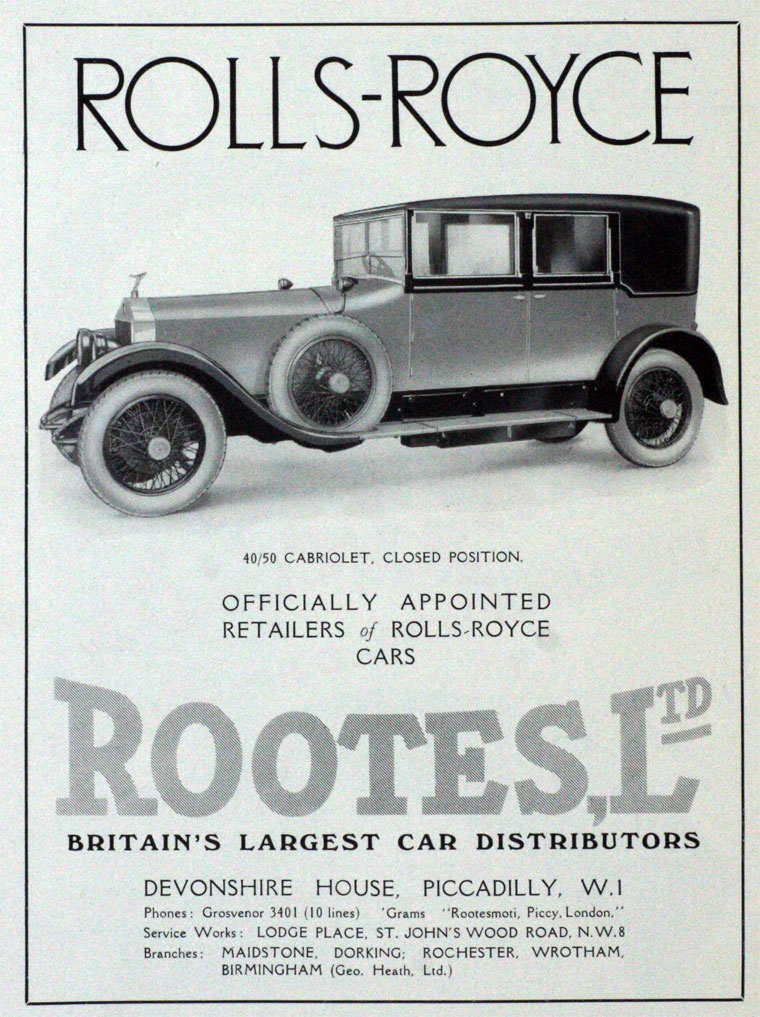 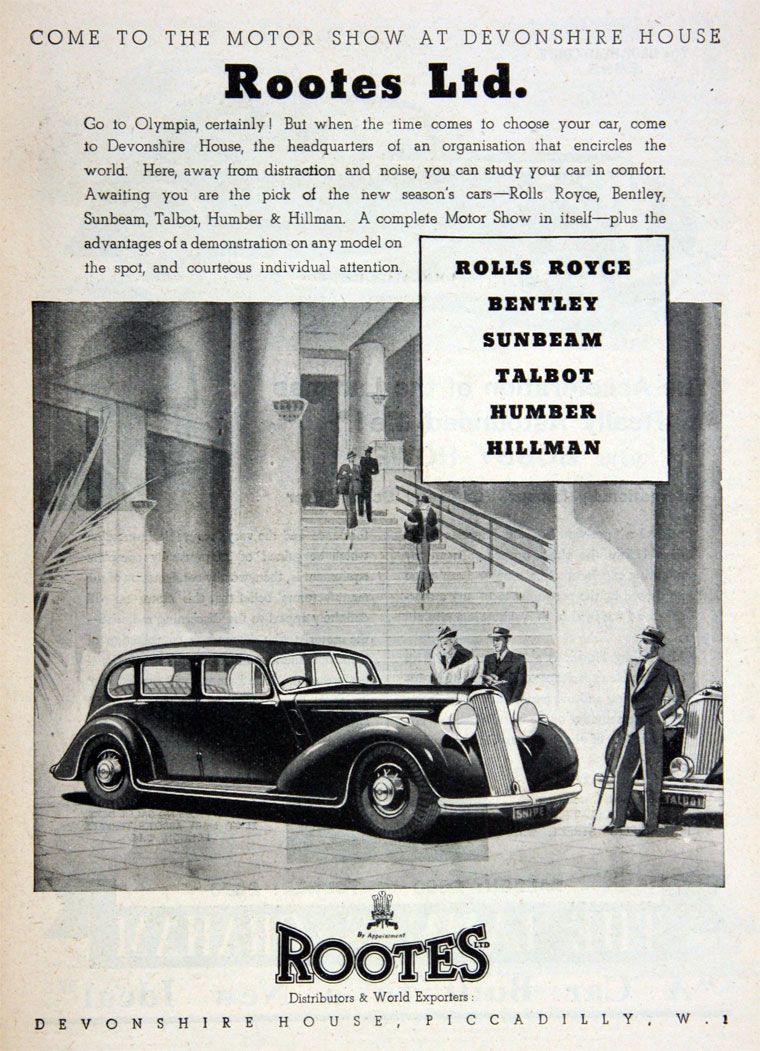 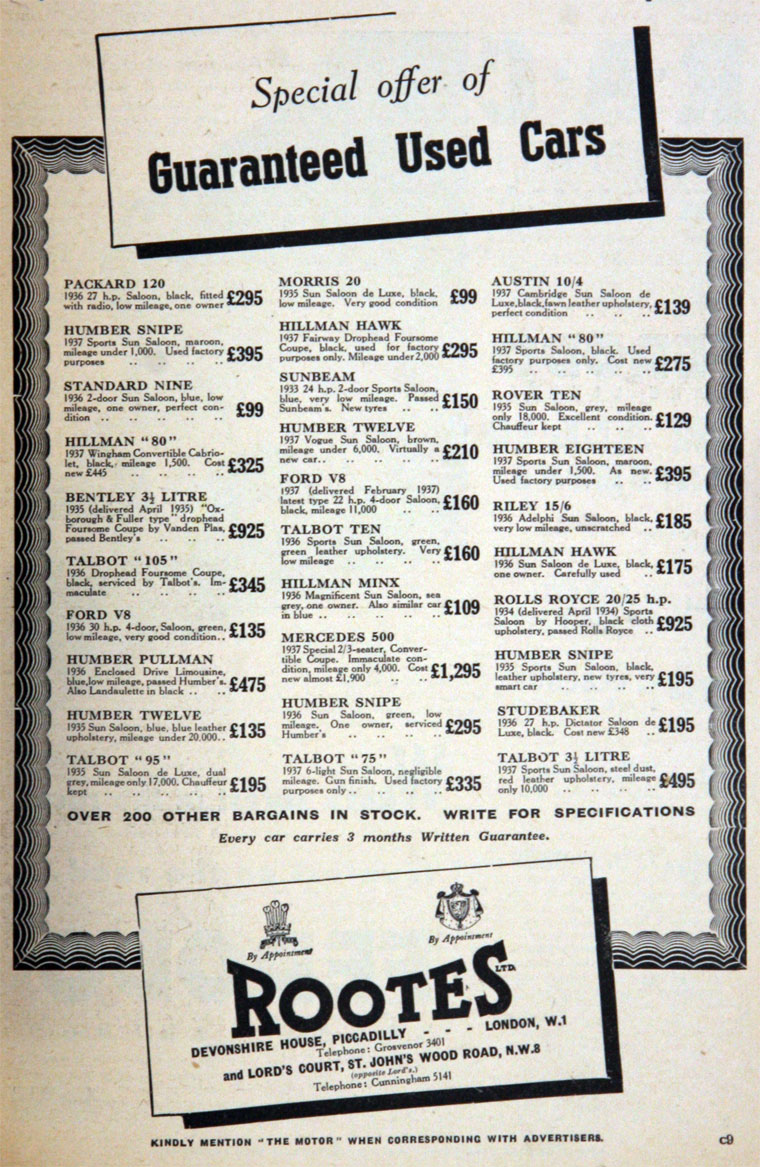 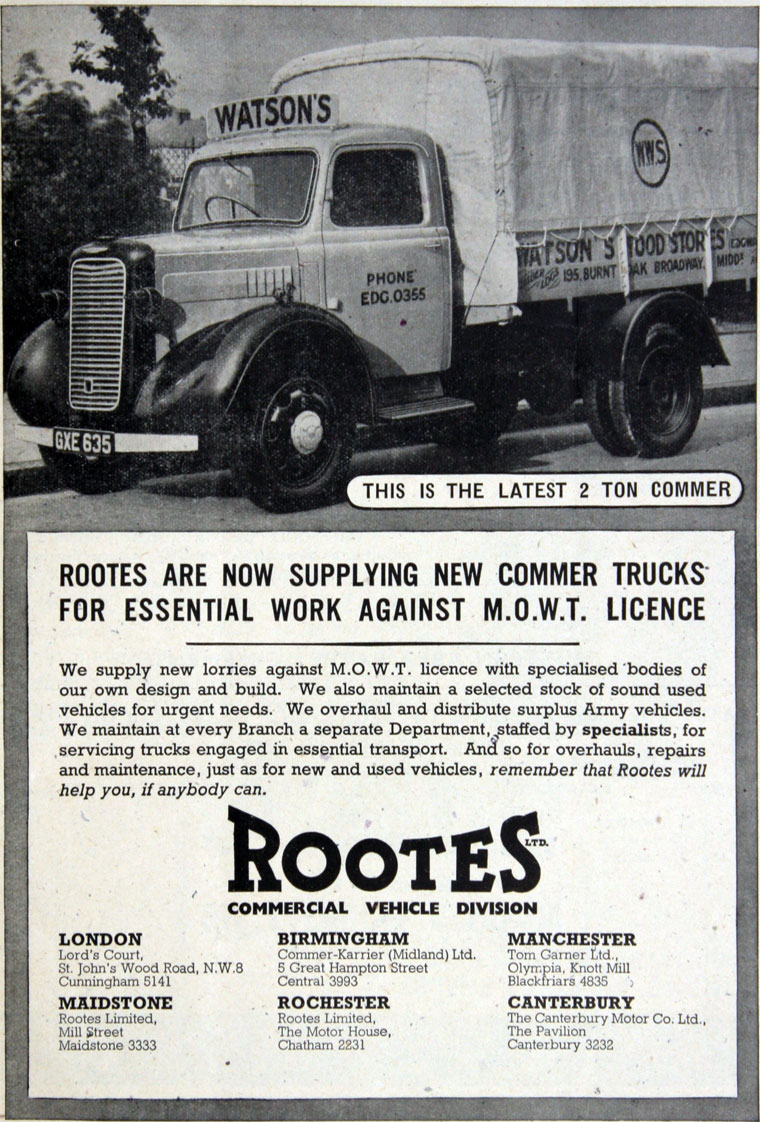 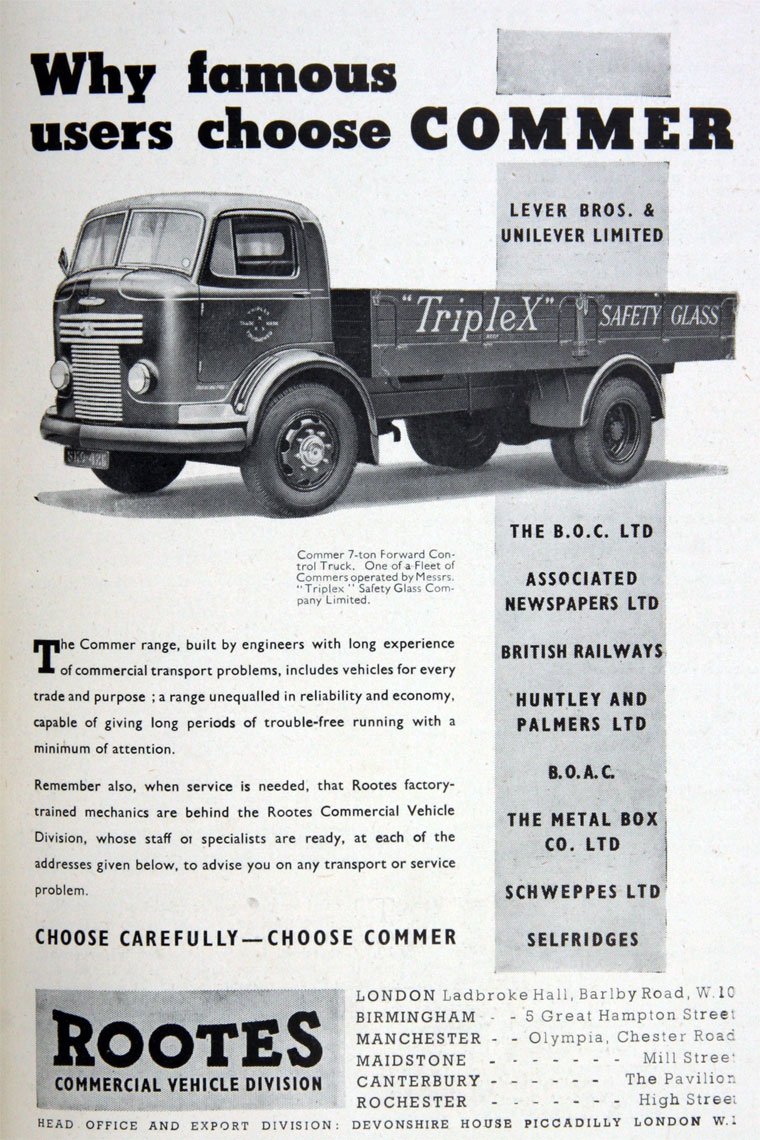 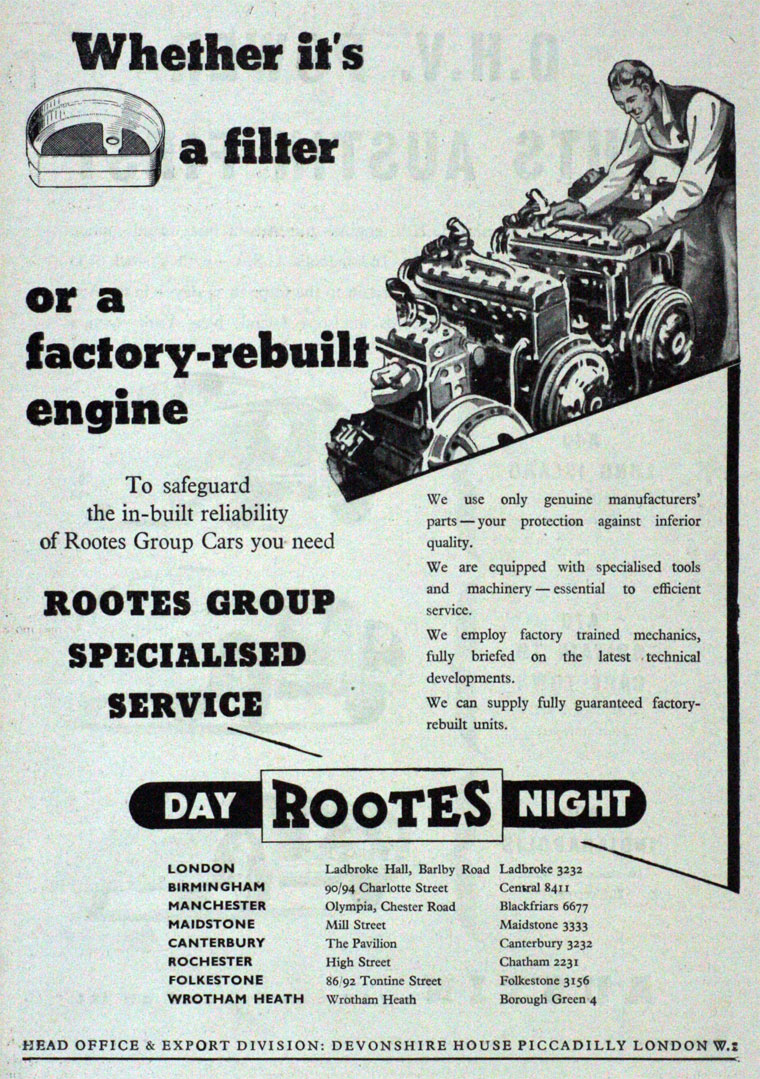 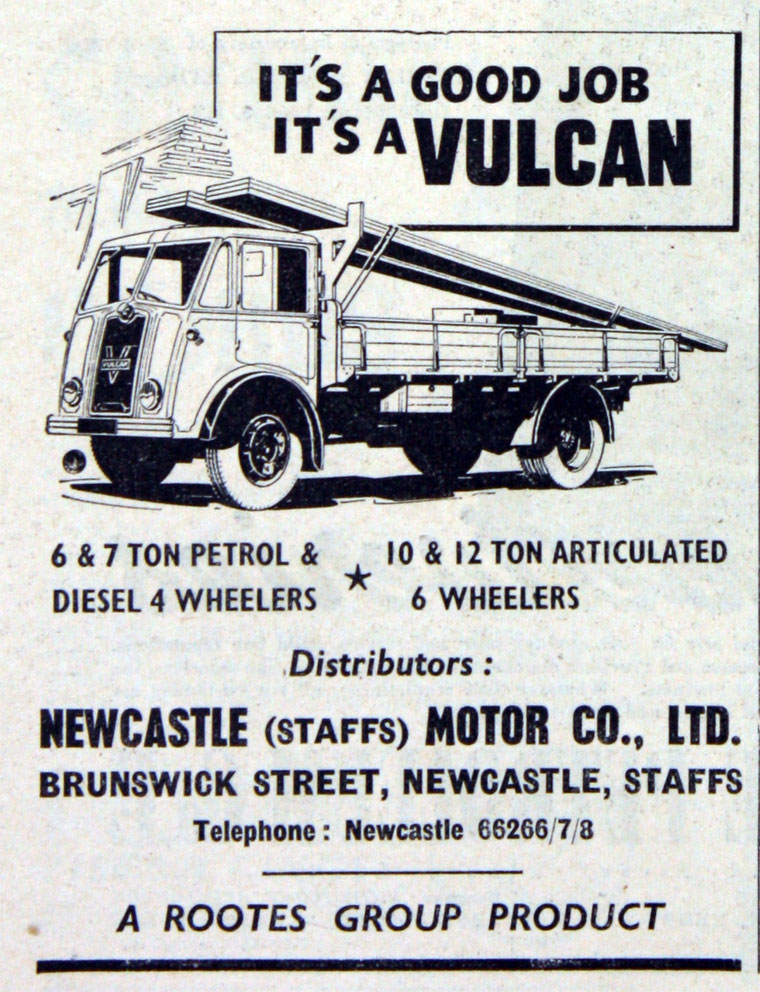 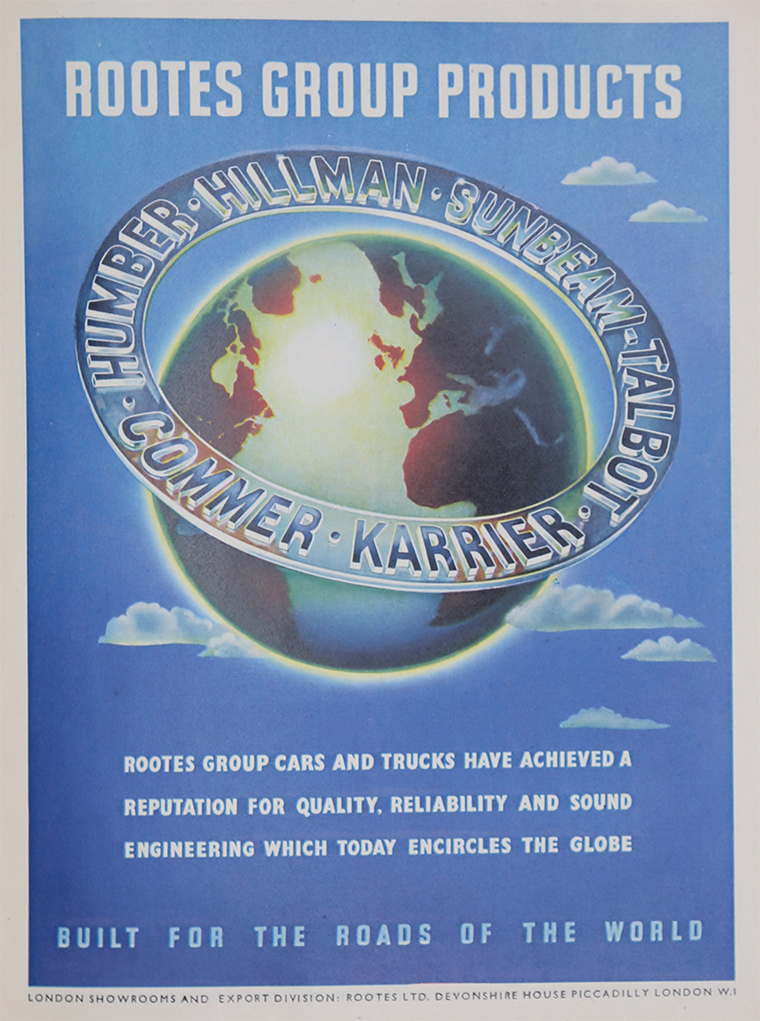 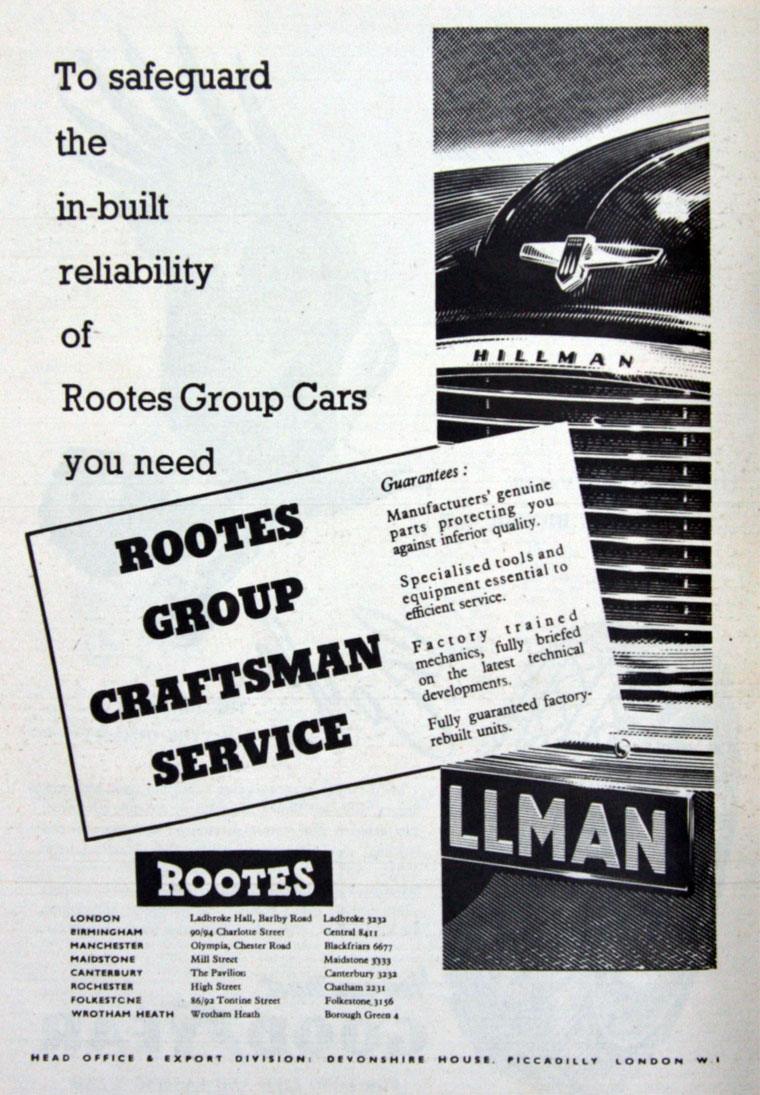 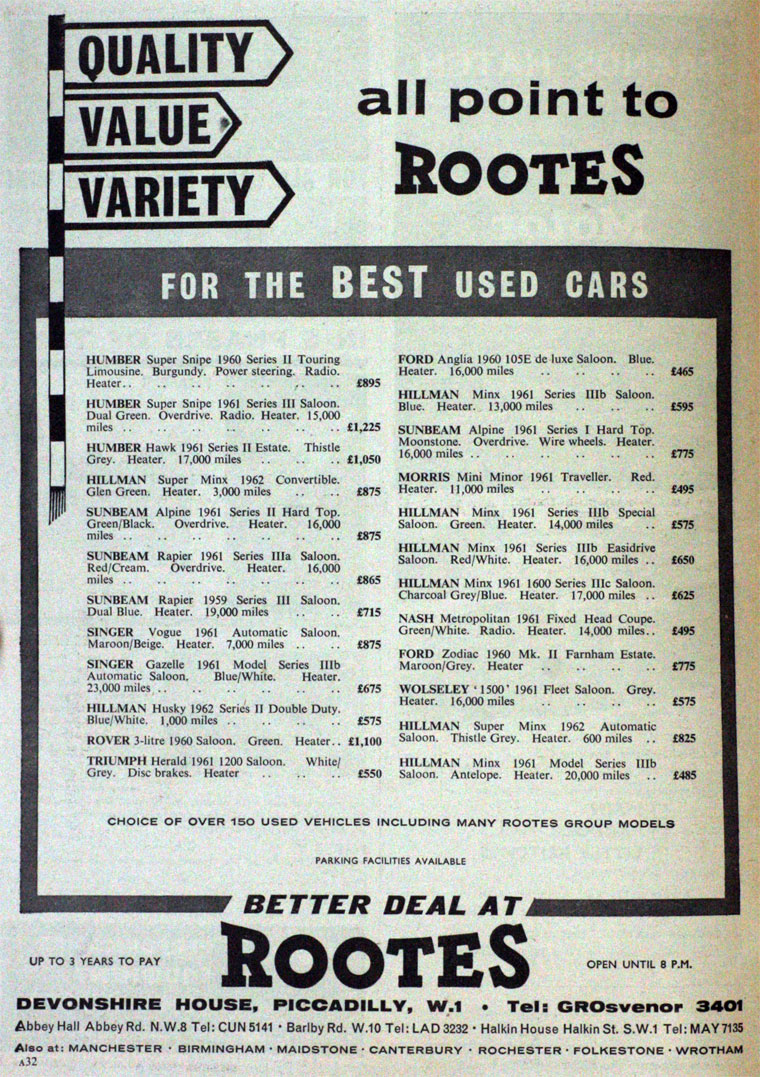 The Rootes Group was a British automobile company which started as a distributor in Kent and grew into a manufacturer based in the UK Midlands.

Rootes was the owner of many well-known British marques, including Hillman, Humber, Singer, Sunbeam, Talbot, Commer and Karrier.

19th century: A cycle-repair and construction business was established by Mr Rootes, father of William Rootes, (Senior) in Goudhurst, Kent.

1897 William Rootes, (Senior) founded a motor business[1] which offered the sale and servicing of motor vehicles.

1917 The Rootes set up a private company called Rootes Ltd to acquire the Maidstone branch of the motor business of William Rootes, (Senior) which was engaged in repair of aircraft engines and manufacture of aircraft parts[2]

1919 Rootes Ltd resumed servicing and sales of cars and commercial vehicles. William Rootes was joined by his brother Reginald Rootes

Growth was based on the distribution of cars, in particular the innovative methods of export, administered from Devonshire House, Piccadilly, with a packing depot on the Thames at Chiswick.

1928 Humber, Hillman and Commer combined and Rootes, who had handled the export sales, provided capital for the re-organisation. Soon they had 60% of the shares and acquired control. [3]

As Rootes grew and took over other companies, it became one of the earliest advocates of the policy of "badge engineering". Hillman was intended to be the basic brand, Singer slightly more upmarket, Sunbeam was the sports brand, while Humber made luxury models. Commer and Karrier were the commercial vehicle brands, with Commer manufacturing light vans with the Karrier badge appearing on heavy vans and light duty trucks (mainly for municipal use).

In 1940, under the Government's shadow factory scheme, Rootes built its massive assembly plant in Ryton-on-Dunsmore, near Coventry, initially manufacturing aircraft, one of the first types being the Bristol Blenheim. Production included one of the RAF's heavy bombers, the Handley Page Halifax. Following the war, the plant was the main focus of the company's passenger car operations. Rootes also sponsored satellite manufacturing operations around the world, notably in Australasia and the Middle East. The best known example of the latter being the Iranian-built Paykan, based on the Hillman Hunter.

After WWII J. Brockhouse and Co acquired the Sunbeam and Karrier trolleybus business from Rootes

1949 Incorporated as a public company; name changed to Rootes Motors Ltd.; Ordinary shares, most of which were held by the Rootes family, were not available to the public. Employed 17,000 persons. [11]

Rootes Ltd continued as a distributor.