Grace's Guide is the leading source of historical information on industry and manufacturing in Britain. This web publication contains 148,433 pages of information and 233,876 images on early companies, their products and the people who designed and built them. 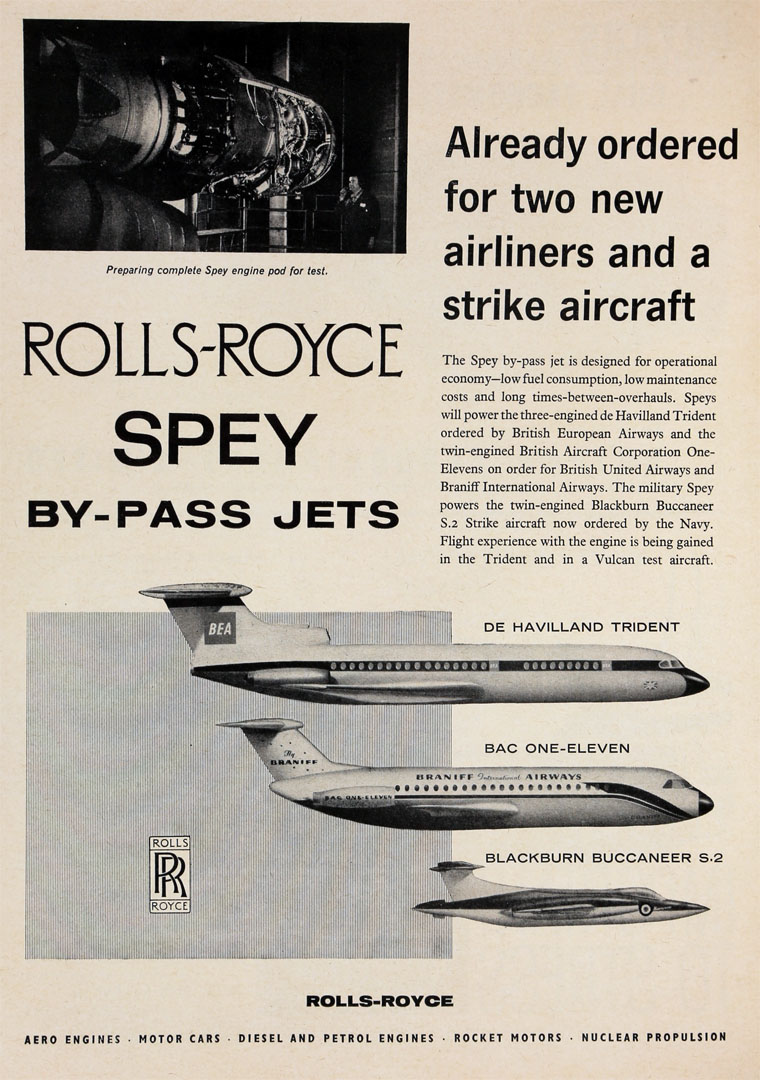 Note: This is a sub-section of Rolls-Royce.

The Spey is a low-bypass turbofan engine from Rolls-Royce that has been in widespread service for over 30 years. Originally intended for the civilian jet airliner market when it was being designed in the late 1950s, the Spey machinery was also used in various military engines, and later as a turboshaft engine for ships known as the Marine Spey, and even as the basis for a new civilian line, the Rolls-Royce Tay. Aviation versions of the "base model" have accumulated over 50 million hours of flight time.

In 1954 Rolls introduced the first commercial bypass engine, the Rolls-Royce Conway, with a 21,000 lbf (94 kN) thrust aimed at what was then the "large end" of the market. This was far too large for smaller aircraft such as the Sud Caravelle, BAC One-Eleven or Hawker Siddeley Trident which were then under design.

Rolls then started work on a smaller engine otherwise identical in design, the RB.163 ( RB; Rolls Barnoldswick, after the original Rover works at Barnoldswick), using the same two-spool turbine system and a fairly small fan delivering bypass ratios of about 0.64:1. The first versions entered service in 1964, powering both the 1-11 and Trident.

Several versions with higher power ratings were delivered through the 1960s, but development was ended nearing the 1970s due to the introduction of engines with much higher bypass ratios, and thus better fuel economy. Spey-powered airliners continued in widespread service until the 1980s, when noise limitations in European airports forced them from service.

In the late 1950s the Soviet Union started the development of a new series of large cruisers that would put the Royal Navy at serious risk. After studying the problem, the RN decided to respond in a "non-linear" fashion, and instead of producing a series of new cruisers themselves, they would introduce a new strike aircraft with the performance needed to guarantee successful attacks on the Soviet fleet. The winning design was the Blackburn Buccaneer, which stressed low-altitude flight as opposed to outright speed.

Flying at low altitude, in thicker air, requires much more fuel; the air-fuel mixture in a jet engine needs to be kept very close to a constant value to burn properly, and more air requires proportionally more fuel. This presented a serious problem for aircraft such as the Buccaneer, which would have had very short range unless the engines were optimised for low-level flight. The early pre-production versions, powered by the de Havilland Gyron Junior, also proved to be dangerously underpowered.

Rolls-Royce attacked this problem by offering a militarised version of the Spey, which emerged as the RB.168. This led to the introduction of the Spey-powered Buccaneer S.2, which served into the 1980s. The Spey proved so successful in this role that it was produced under license in the United States as the TF41 (F113), and was used in a number of British and US designs.

During its lifetime the Spey garnered an impressive safety record, and was the first engine of any sort to be allowed 10,000 hours between overhauls. This dramatically cut maintenance costs, and is one of the major reasons it continued in service even when newer designs were available. With the need for a 10,000 to 15,000 lbf (44 to 67 kN) thrust class engine starting up again with the removal of the Spey from service, Rolls then used the Spey turbomachinery with a much larger fan to produce the Rolls-Royce Tay, a rather modern design even though its ancestors can be traced to the 1950s.

A fully-updated version of the military RB.168 was also built to power the AMX International AMX attack aircraft, filling a role similar to the original Buccaneer.

Marine Spey The Spey is still produced today by Rolls-Royce as the Marine Spey, which powers seven ship classes including the Royal Navy's Type 23 frigates and provides a power output of 19.5 MW. The marine spey incorporates technology from the Tay and RB211.