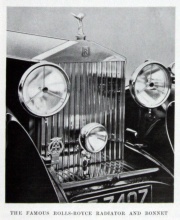 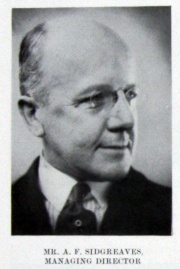 Note: This is an abridged version of a chapter in British Commerce and Industry 1934

Rolls-Royce experimental shops and laboratories at Derby employ no fewer than four hundred highly qualified metallurgists, engineers, chemists and other skilled workers, while in the design department the number of experts and draughtsmen exceeds two hundred.

That this extreme specialization and striving after perfection has influenced contemporary life, and, indeed, is fast revolutionizing it, is also confirmed by a glance in retrospect at some of Rolls-Royce records since 1918. They comprise:—

These are all triumphs for Rolls-Royce aero-engines. Although an aircraft engine is from various points of view rather different from any motor-car engine — if only for the reason that the former never gets any rest — yet it is due to the Rolls-Royce ideals and principles in regard to designs, materials and tests in their automobile engine. work, and their application to aero-engines, that these records have been made possible. As an indication of the remarkable power output of these aeronautical racing engines a comparison with a motor-car engine of £20 tax rating is illuminating. Lieut. Stainforth's machine gave a test-bed output of 2,300 brake horse-power at 3,200 revolutions per minute. A motor-car engine of the capacity described giving the same power output in relation to cylinder capacity would develop no less than 266 brake horse-power!

For example, the Rolls-Royce car engine may fairly claim to be the most brilliant achievement of all motor-engineering feats in England or any other country. Through certain features in its design it attains almost the ideal of perfect lubrication when in action. In addition, through an early decision of the firm, its own research departments embarked on experiments with metals, and by means of alloys and heat-treatment, produced new grades of steel which in strength, tenacity and quality could not be excelled by or even obtained from outside sources. The same attention has been devoted to aluminium alloys, and, in fact, to every raw material and component utilized in the production of both the engine, the transmission system, the springs and every detail of the chassis.

Similarly, in the case of the aero engine. As an example, the "R" engine has to be capable of standing up for one hour at full throttle. The supercharger developed for this engine is probably the most efficient in the world in its ratio between the power given to the engine and the power absorbed to drive it. A designer of a racing aeroplane has to clench his teeth, close his eyes, tell the test people to get on with it, and hope for the best. The "R" engine runs at over 1,000 r.p.m. more than a standard engine of the same bore and stroke. And this with 6-in. pistons! A racing-car engine will turn at 6,000 r.p.m. but with pistons the size of an average coffee cup.

In addition to the large number of research and experimental personnel employed by the company, the number of inspectors supervising, testing and passing all components has no parallel in any other motor manufacturing organization. An example of this thoroughness may be cited from the tests to which each engine is submitted. Buyers of most cars are advised to drain off the old oil from the crankcase after running a few hundred miles, and to replenish the sump with fresh oil. However clean a new crankcase and sump may be, there are always some metallic particles, grit and other abrasive impurities that remain and are gradually taken up by the lubricating oil in course of running, converting the oil into a mild form of grinding paste. Most of these impurities come away when the first charge of oil is drained off; but some remain until the second or third is discarded.

At the Rolls-Royce factory, however, a special method is adopted for preventing the impurities from circulating at all, even while the engine is being tested. During the first run under power a supply tank containing hundreds of gallons of oil is connected to the engine sump, and the lubricant then follows its usual course, except that immediately it has circulated once it drains out of the crankcase. There is a continuous flow of fresh and cool oil, which in due course removes all impurities in its passage through the engine. The used oil is collected and carried to a centifrugal separator, where foreign matter is removed, and whence the purified oil is carried back to the main supply tank.

During this preliminary run of the new engine which occupies four hours, the fuel is coal gas, not petrol. Coal gas is convenient to use because it allows the engine to be run very slowly without risk of the unvaporized elements of a rich mixture of liquid fuel washing the oil from, or contaminating it on, the cylinder walls.

A series of power and endurance tests on petrol follows. The engine is coupled to a Heenan and Froude water "brake," and is run fast with a light load for half an hour, then at 1,000 r.p.m. under quarter load, after which the speed is increased to 1,500 r.p.m., the load to three-quarters, and the period of running to an hour. When this section is completed, the engine is run for three separate "bursts" of five minutes at 2,000 r.p.m. under full load.

Power curves are then taken, obtained by five-minute runs under full load at speeds ranging from 500 r.p.m. to 3,000 r.p.m., and each engine must conform to a definite standard of consistency and efficiency. Petrol consumption tests are made, after which the engine is thoroughly examined and decarbonized, preparatory to being fitted to a chassis and tested, first in the works and then on the road.

The chassis is treated with the same severity. It is fitted with solid-tyred lorry wheels(!) and secured to a test bed with the wheels resting on drums four feet in diameter. Power-recording brakes are coupled to the drums, so that accurate records can be taken of the power developed at the wheels on every gear ratio and at various speeds. This forms primarily an efficiency test of the transmission, but during its progress most precise records are taken of the behaviour of the radiator and water-cooling system in general. For this latter purpose stop watches and thermometers show, among other things, how much time is occupied (1) in consuming five gallons of water at a temperature of 80 deg. Cent., and (2) in the water increasing in temperature from 60 to 90 deg. Cent. when running "flat out" (i.e., at full speed developing full power).

Then come the chassis tests on the road. A tester at Derby does not "pass" ten or a dozen cars a day. Each Rolls-Royce chassis is under test on the road, not for half an hour or an hour, but for four whole weeks. That is before the body is fitted.

The Rolls-Royce Company do not build bodywork, but neither do they pass the completed and tested chassis to coachbuilders selected by the purchasers, and trust to luck that the body will be a credit to the chassis and correctly fitted. They want to know all about it and who is to make it, and insist upon being allowed to check every detail, and finally, to depute one of their experts to give the completed car a thorough road test.

To these extreme methods of testing do we owe the incomparable excellence of Rolls-Royce products and their reliability under unexampled stresses. To these and the research work of the staff do we owe world-leadership in the construction of aero engines. Some idea of the progress made with aircraft may be gauged from a few simple and homely comparisons with the Rolls-Royce Schneider Trophy Engine of 1931 during a flight of one hour.

1. The twelve pistons together cover a distance of approximately 500 miles whilst reciprocating in the cylinders, during which period approximately five million stops and starts of the pistons are made at the ends of their respective strokes.

2. The fuel is used quicker than you can pour it out of a two-gallon petrol tin. An hour's fuel supply would suffice for 10,000 miles in the case of an Austin Seven, or Morris Minor motor.

3. The quantity of air drawn into the cylinders to burn the hour's fuel supply is a quarter-million cubic feet of free air, weighing about eight tons.

4. To cool the engine 10,000 gallons of water are circulated around the cylinder jackets.

5. The propeller screws its way through 4,500 tons of air during the hour's flight and the tips of the airscrew cover a distance of 600 miles along a helical path.

6. In one hour the Rolls-Royce "R" engine will do approximately the non-stop journey from London to Edinburgh, whereas the "Flying Scotsman" takes approximately eight hours.

Of equal importance to technical efficiency, and as an example of the ideals which are being achieved by the great pioneers of industry in England, is the attention devoted by the company to the social welfare of all grades of its servants. In 1920 a central Welfare Committee of sixty members, half nominated by the directors and half by the employees themselves, was entrusted with the task of co-ordinating into one whole, the various welfare schemes then in existence. Sub-committees were then formed to deal with special duties —executive, finance, general purposes, educational, social and sports. Among these the general purposes committee supervises the administration of the sick and benevolent scheme to which all members contribute the educational committee arranges for the technical training and education of promising apprentices, conducts a lending library from which an average of two hundred and fifty books are borrowed each week, and engages authoritative speakers to give lectures.

Sports and athletics are a part of the curriculum, and a beautiful area, nineteen acres in extent, is laid out for tennis, cricket, football, hockey, bowls, a racing track and a playing ground for children, with several attractive pavilions.

There are 2,500 members in the Rolls-Royce Welfare Club, and it is the pride of the directors that the high pitch of development attained by the company in the manufacture of motor and aero-engines—second to none in the world is the work of employees who have also built up one of the finest social organizations to serve their lives in times of leisure and relaxation.

The first founders of the company, Frederick Henry Royce, Charles Stewart Rolls and Claude Johnson, are dead, but the tradition they established is being carried on from triumph to triumph by their successors to-day, and the high esteem of the British public is evidenced by the financial strength of the organization. With a comparatively small capital of under one million pounds, the company's assets are close upon two million and a quarter pounds, nearly a million of which is held in gilt-edged securities. The financial structure of the company is therefore as pre-eminent as its products, whilst its resources give confidence that the pioneering of the past is likely to be continued in the national interest with even greater achievements in store in the future.