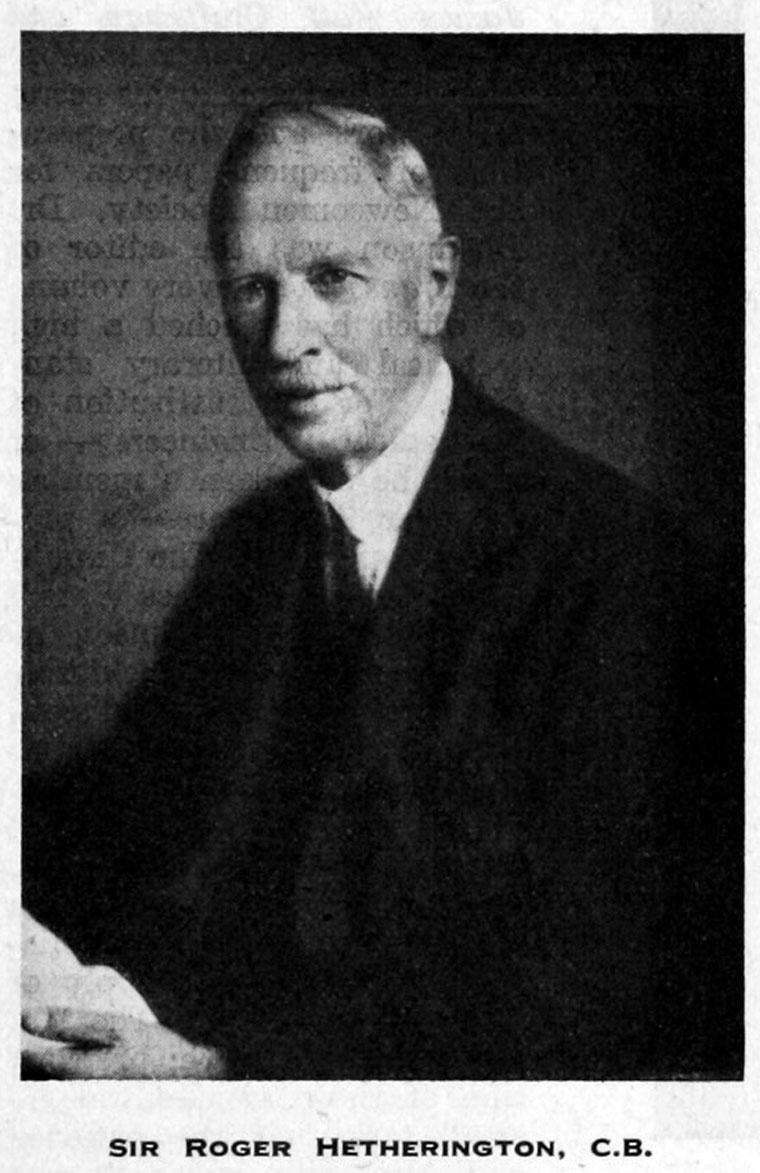 We have learned with regret of the death of Sir Roger Gaskell Hetherington, which occurred suddenly on Sunday last, February 24th, at his home at 6, Bishopswood Road, Highgate, N.6.

Roger Gaskell Hetherington, who was the son of the late Mr. William Lonsdale Hetherington, was born at Highgate on February 10, 1876. He was educated at Highgate School and at Trinity College, Cambridge, where he took an engineering course. His practical training in civil engineering was gained with Messrs. John Taylor and Sons, consulting engineers, of Westminster, with whom he continued for a few years as a resident engineer. In that capacity Sir Roger took a great deal of the responsibility for several water supply and sewerage schemes which were being carried out in various parts of this country, under his firm's direction, in the early years of this century. Subsequently he was appointed principal assistant engineer to Messrs. Taylor and Sons.

After a short spell as a temporary inspector for the old Local Government Board, Sir Roger became a permanent engineering inspector in 1909. By far the greater part of his career was thus spent in Government service, his appointment as Chief Engineering Inspector of the Ministry of Health being made in 1930. He was created C.B. in 1932, and his honour of knighthood was conferred in 1945, shortly after his retirement.

Sir Roger was elected an Associate Member of the Institution of Civil Engineers in 1901 and a Member in 1913. Throughout the years he took an active part in the affairs of the Institution and succeeded to the presidential chair in 1947. His presidential address was a particularly informative one, dealing with the contribution which the engineer had made and continued to make to the improvement and maintenance of the public health of the nation. The address revealed, very effectively, the experience gathered by Sir Roger during his long tenure of office in an important public appointment. He indicated some of the ways in which engineers have contributed to the health of this nation and he showed that the work of engineers in the improvement and maintenance of the public health was no mean task. In that task Sir Roger shared most efficiently throughout the whole of his distinguished career.