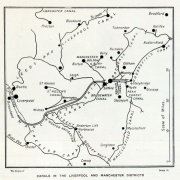 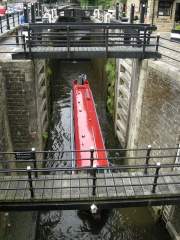 The Rochdale Canal is a navigable "broad" canal in northern England, part of the connected system of the canals of Great Britain.

The Rochdale is a Broad canal because its bridges and locks are wide enough to allow vessels of 14 ft width. The canal runs for 32 miles (51 km) across the Pennines from the Bridgewater Canal at Castlefield Basin in Manchester to join the Calder and Hebble Navigation at Sowerby Bridge in West Yorkshire.

As originally built, the canal had 92 locks. Whilst the traditional lock numbering has been retained on all restored locks, and on all the relocated locks, the canal now has only 91 locks. The former locks 3 and 4 have been replaced with a single deep lock (Tuel Lane Lock), which is numbered as 3/4.

1776 The Rochdale Canal was conceived when a group of 48 eminent men from Rochdale raised £237 and commissioned James Brindley to conduct a survey of possible routes between Sowerby Bridge and Manchester.

Brindley proposed a route similar to that built, and another more expensive route via Bury.

1791 Further progress was not made until 1791, when John Rennie (the elder) was asked to make a new survey in June, and two months later to make surveys for branches to Rochdale, Oldham and to some limeworks near Todmorden.

1792 The first attempt to obtain an Act of Parliament was made in 1792, but was opposed by millers, concerned about water supply. It was not until 4 April 1794 that an Act was obtained which created the Rochdale Canal Company and authorised the construction of the canal. Further acts of parliament were obtained in 1800, 1804 and 1806, the main purpose of which was to raise additional finance.

Note: Samuel Smiles and others credited John Rennie (the elder) with the success of the works, but this view has been challenged by Hadfield and Skempton[1], who describe the building of the canal as 'almost a pattern-card of trouble-free engineering .... Jessop's unknown achievement.'

The canal was opened in stages, as it was completed, with the Rochdale Branch being the first in 1798, further sections in 1799, and the bottom nine locks opening in 1800, so that boats from the Ashton Canal could reach Manchester.

1804 Officially, the canal opened in 1804, but construction work continued for another three years.

1834 A 1.5-mile branch from Heywood to Castleton was opened.

c.1837 The access to the Bridgewater Canal from the Rochdale Canal at Castlefield, Manchester, had been severely constricted by a long narrow tunnel through sandstone between Lock 91 at Knott Mill and the last lock, 92 at Castlefield Basin. It was decided to open up the canal immediately west of Deansgate.[2]

Because of its width, it was more successful than the Huddersfield Narrow Canal and became the main highway of commerce between Lancashire & Yorkshire. Cotton, wool, coal, limestone, timber, salt and general merchandise were transported.

Cutting tolls, the canal managed to retain trade and remain profitable, but by the start of the 20th century it was in financial trouble.

1923 Its reservoirs were sold to the Oldham and Rochdale Joint Water Board.

Apart from a short profitable section in Manchester linking the Bridgewater and Ashton Canals, most of the canal was closed in 1952 when an Act of Parliament was obtained to ban public navigation (the last complete journey having taken place in 1937) and by the mid 1960s the remainder was almost unusable.

Construction of the M62 motorway in the late 1960s took no account of the canal, cutting it in two.

With the growth in leisure boating, a campaign was mounted for its re-opening. The first section to be restored was the nine locks between the junction with the Ashton Canal and the Bridgewater Canal, as a result of the Ashton Canal reopening in 1974. The Rochdale Canal Society was formed, and worked hard both to protect the line of the canal and to begin the process of refurbishing it, concentrating on the section from Todmorden to Sowerby Bridge. Nearly 16 miles was opened in this way, with the section from Todmorden to Hebden Bridge opening in 1983, and the entire eastern section up to the summit opened by 1990. The reopened section was still isolated from the canal network.

The next success was a re-fashioned link with the Calder and Hebble Canal (which had never closed) at Sowerby Bridge, which joined the restored section to the national network in 1996, and involves one of the candidates for the deepest lock on the British canal system (Tuel Lane Lock at nearly 20 ft).

In 2000, the canal, which had never been nationalised, passed from the control of the Rochdale Canal Company to the Waterways Trust, and an £23.8 million investment package was announced, with funding coming from the Millennium Commission, English Partnerships, and the councils of Oldham and Rochdale. As restoration proceeded, boats could travel further and further west, and the restoration of the sections through Failsworth and Ancoats were a significant part of the re-development of the north Manchester districts.

On 1 July 2002, the restored sections joined up with the never-closed section in Manchester, thus re-opening the canal to navigation along its entire length.