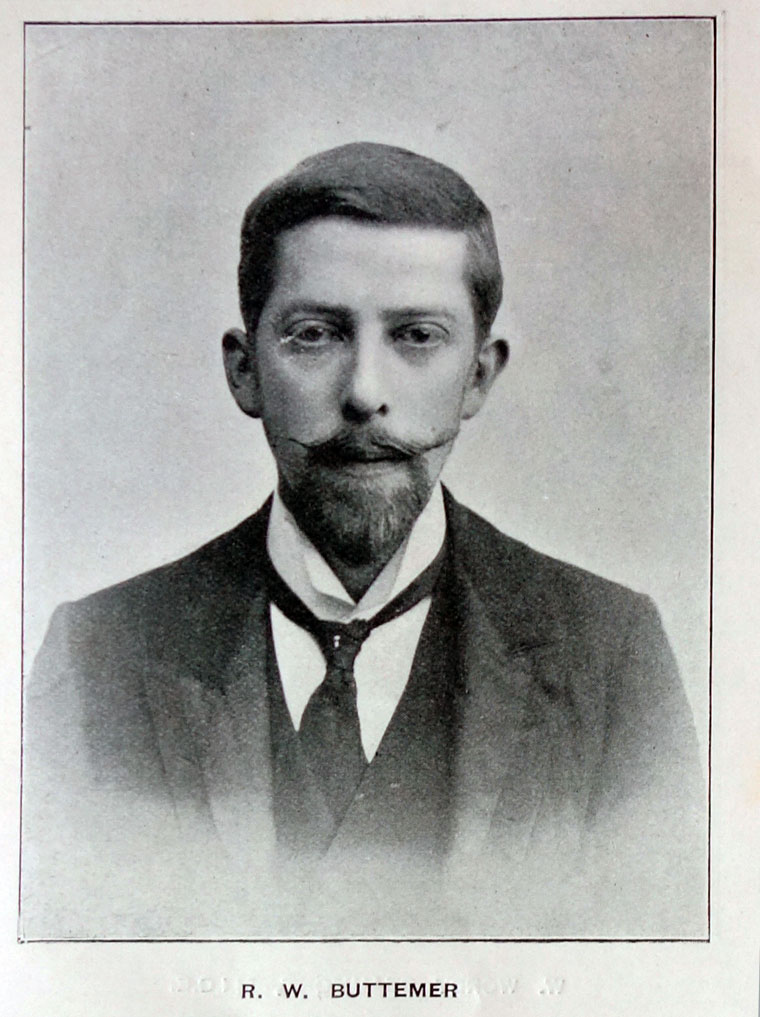 BUTTEMER, R. W.- Born in 1870, and educated at Charterhouse and Emmanuel College, Cambridge, taking honours in Nat. Sci. Tripos in 1893. Mr. R. W. Buttemer is by profession an analytical chemist, now principally occupied in private research after many years of practice. Amongst his principal pursuits are automobilism, mechanics, and astronomy. He has owned a Benz and other cars; at present a Decauville car. Has taken part in the early tours of the Club, which he joined on February 21st, 1898, being on the Club Committee since March 5th, 1901.

1910 Of the West Surrey Automobile Club. Biographical information and image at Automotor Journal 19100430

"ROBERT WILLIAM BUTTEMER, M.A ., whose death occurred at Godalming on 19th January 1951 at the age of eighty, was elected a Member of the Institution of Automobile Engineers in 1907. He was also a Fellow of the Chemical Society. He was educated at Charterhouse and Emmanuel College, Cambridge, where he graduated with honours in natural science in 1893. The remainder of his life was spent in private experimental work, which he carried out in his workshop and laboratory at Godalming. His interests covered a wide range and included mechanical, automobile and electrical engineering, as well as chemistry, astronomy, aviation and radiography. He made wireless sets from the earliest days of the industry and built model locomotives and also produced a number of inventions, including a very early electric clock. Mr. Buttemer was a pioneer motorist, his first car being an 1897 11 h.p. Benz, the engine of which he converted into 3 h.p., and he travelled 77,000 miles in this machine. He was a founder member of the Royal Automobile Club and an original member of Brooklands Automobile Racing Club, winning many cups in motor trials in the early days of motor cars."