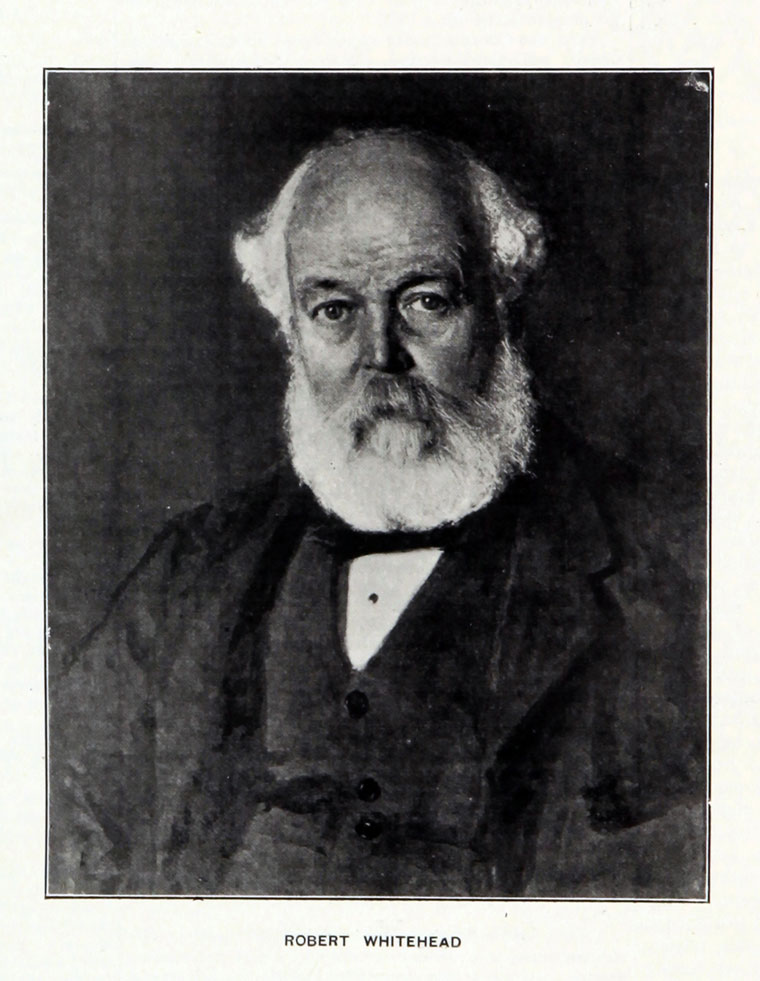 At the age of 16 he was apprenticed to Richard Ormerod, engineers and ironfounders of Manchester. He trained as an engineer and draughtsman, and attended Manchester's Mechanics Institute.

1845 (1846?) He married Frances Maria Johnson from Old Byland, North Yorkshire. They had seven children, two of whom died young.

He next moved to Milan, Italy, and set up as an independent consultant engineer, specialising in textile machinery. He also advised on the draining of the Lombardy marshes.

Civil disorder arose in Milan, in protest against the Austro-Hungarian empire, and Whitehead moved with his family to Trieste, on the Adriatic coast, where he concentrated on the design of marine steam engines.

1856 Robert's work in Trieste was noticed by the founders of a metal foundry called Fonderia Metalli situated in Fiume (Rijeka), today in Croatia. In 1856 Whitehead accepted the job as manager of the company. He also changed its name to Stabilimento Tecnico di Fiume, and began producing steam boilers and engines for ships. The company undertook work for the Austro-Hungarian Navy.

1864 Whitehead became involved with torpedoes. He made a contract with engineer Giovanni Biagio Luppis, a retired captain of the Austrian Navy, in order to develop Luppis' 1860 invention of the first prototypes of a self-propelled torpedo. Luppis had settled in Trieste, where he tried to realize his long-time idea of the “coast saviour” (salvacoste), a new naval weapon. The weapon was a low profile surface boat, propelled by compressed air [clockwork?], and controlled by ropes from the land.

Robert's initial torpedo experiments were conducted with the help of his 12-year son, John, and a workman, Annibale Ploech. This work resulted in the Whitehead-Luppis torpedo, the Minenschiff, the first self-propelled (locomotive) torpedo, officially presented to the Austrian Imperial Naval commission on December 21, 1866. The torpedo was propelled by compressed air. He thus introduced the world to a weapon that almost changed the course of history during both World Wars.

Considerable hurdles had to be overcome, particularly in maintaining the torpedo at a constant depth, and in this connection Whitehead made his greatest contribution to the development of torpedoes, with his invention of a hydrostatic sytem of controlling the depth control vanes. The details of the mechanism were kept secret for many years.

1868 The Austrian Navy placed its first order for Whitehead torpedoes. Whitehead retained the right to sell to any country, and signed a new contract with Luppis, giving Whitehead control of all sales.

1869 Whitehead's torpedoes demonstrated to the Royal Navy, and the Government bought the rights to produce the weapon for £20,000[1]

1872 Fiume Factory purchased by Whitehead and Count Georg Hoyos (who had married Whitehead's daughter Alice in 1869). The factory was renamed Silurifico Whitehead, with John Whitehead as a director. By this time the torpedo had been improved with a better motor and contra-rotating propellers.

There were many important visitors to the Fiume works, and one such was Louis Victor Robert Schwartzkopff, the owner of the German firm Berliner Maschinenbau. On the last night of Schwartzkopff's visit, a disturbance had reportedly taken place in the plant's drawing office. In the morning, it was discovered that someone had broken in and stolen a set of torpedo plans. Whitehead maintained that Schwartzkopff had nothing to do with the affair. A few months after, Schwartzkopff's company unveiled a new product, the Schwartzkopff torpedo. It looked very similar to the Whitehead torpedo and in fact featured Whitehead's "Secret" pendulum-and-hydrostat control system. No doubt other versions of the story are available.[2]

The British Admiralty required the Whitehead torpedoes to be produced in Britain. After negotiations with Captain Edwin Payne Gallwey, Robert Whitehead agreed to start a factory at Ferrybridge, near Weymouth, to produce torpedoes.

Whitehead spent part of each year on his estate, Paddockhurst, Worth, in Sussex.

. . . he produced the first dependable self-propelling and steering torpedo. . . Robert Whitehead was born on January 23rd, 1823, at Mount Pleasant, Bolton-le-Moors . . . at the age of fourteen he was apprenticed to his mother's brother, Mr. William Swift, who was manager of the engineering works of Richard Ormerod, of Manchester. . . He was employed with this firm for nine years . . . his uncle, Mr. Swift, went abroad as manager to Messrs. Philip Turner and Sons, who had a business in Marseilles. Young Whitehead joined his uncle, and entered into the service of the same firm. . . . three years later, he moved to Milan, and set up in business on his own account. . . . In 1848 he left Milan and went to Trieste , entering the service of the Austrian Lloyd Co . . . In 1860 he went from Trieste to Fiume and was persuaded by some friends, who provided the necessary funds, to open the Stabilimento Tecnico Fiumano . . . In 1872 he bought up the works . . .