Robert Stephenson and Co: Locomotion No. 1 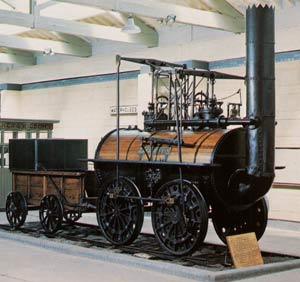 Exhibit at the Darlington Railway Museum.

Exhibit at the Darlington Railway Museum. 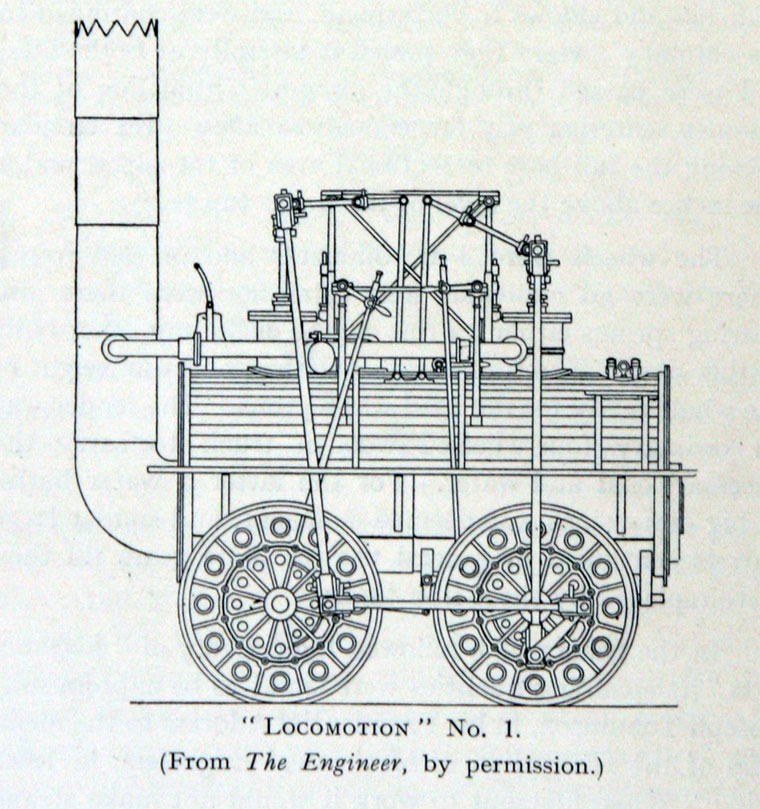 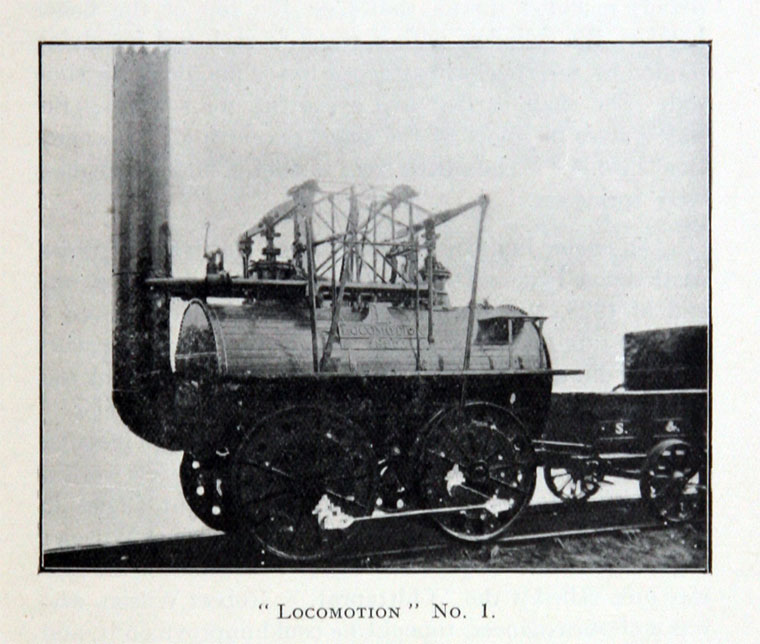 1925. Railway Centenary Celebrations on the Stockton and Darlington Railway.

When the Stockton and Darlington - the first public railway in the world - was opened, there was but one locomotive, the celebrated " Locomotion No. 1."

1825 Locomotion No. 1 was a steam locomotive built by Robert Stephenson and Co in 1825 and it hauled the first train on the Stockton and Darlington Railway on September 27, 1825. The evening before the public opening of the line on September 27th, it made a trial run from , Shildon to Darlington with a party of the "Committee," as the directors were then termed. They were accompanied by George Stephenson, whose elder brother James Stephenson drove the engine. It was originally called 'Active'.[1]

It was effectively a beam engine on wheels with vertical cylinders. It was one of the first locomotives to use coupling rods rather than chains to drive its 0-4-0 wheel arrangement. The wheels were 4 feet in diameter and cast iron. The engine frame was of timber and the whole thing weighed 6.5 tons.

The cylinders were vertical and 10 inches in diameter and with 24 inches stroke. The boiler was 4 feet in diameter and 10 feet long with a heating surface of 60 square feet. It could haul a load of 90 tons at a speed of 6 to 8 mph.

1825 It broke a wheel within a month of starting work.

1828 July 1st. The boiler exploded at Aycliffe Lane, killing John Cree the driver (who died on the 3rd) and maiming Edward Turnbull the water pumper. With advances in design such as those incorporated into Stephenson's Rocket, Locomotion became obsolete very quickly.

It was rebuilt by T. Hackworth at the company's workshops at Shildon. He gave it a new boiler, with a single flue and two return tubes, but subsequently a third boiler with single flue of the original design was supplied, and in this form the engine finished its working career and remained in service until 1841 but appears to have been called upon to officiate on festive occasions, such as the opening of the Middlesbrough and Redcar line in 1846, when it headed the procession. For some years it was used by Messrs Joseph Pease and Partners as a pumping engine, and in 1857 was placed on a pedestal near North-road Station, Darlington.

In 1857 it was preserved. Locomotion No 1 was on display in Alfred Kitching's workshop near Hopetown Carriage Works from 1857 to the 1880s.

On the occasion of the Jubilee of the Stockton and Darlington Railway in September, 1875, it was again in steam.

In 1876 it visited the Philadelphia Exhibition, and in 1881 appeared in the procession of locomotives at the Stephenson Centenary.

Finally it was shown at the Liverpool Exhibition of 1876 and the Paris Exhibition of 1889, and in 1892 was placed in position in Bank Top Station, Darlington until 1975.

1925 There is a detailed account of the Stockton and Darlington Railway Centenary including the 'Locomotion' in The Engineer 1925/07/10 p 42.

The locomotive is now on display at the Darlington Railway Centre and Museum, located in the same building as Darlington's North Road railway station, on long-term loan from the National Railway Museum.