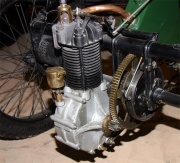 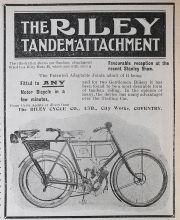 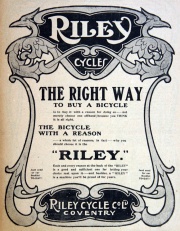 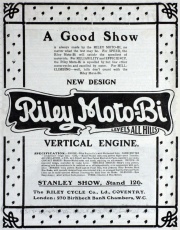 1896. The Riley Cycle Co was registered on 25 June, to acquire the business of the Bonnick Cycle Co. [1] This was instigated by William Riley, (Junior) in conjunction with his brother, Herbert John Riley, and his brother-in-law Basil Riley. Some of William's sons, who joined the business subsequently, took the lead in developing motorised transport.

William retained the services of Arthur Bonnick as Works Manager and E. J. Bakewell as Sales Manager at King Street.

At first, the small engines fitted to Riley Cycles were obtained from specialist engine manufacturers but the desire to design and produce their own engines was strong

1902/3 the Riley Engine Co was established, also in Coventry, by three of William's sons Victor, Percy and Allan. They patented the mechanically operated inlet valve. The head of the new company was William Riley's son Percy, who at the age of 20 was already a practical and ingenious engineer who had successfully built his first car before his 18th birthday. At first, he simply supplied engines for Riley motorcycles, but the company soon began to focus on four-wheeled automobiles.

1905 Their Vee-Twin Tourer prototype, produced in 1905, can be considered the first proper Riley car.

1906 Having outgrown its original site, the Riley Engine Co. moved into new premises in Aldbourne Road, which it and its successors were to occupy continuously until 1974.

1907 they announced the first ever detachable road wheel, designed by Percy. These wheels became an important part of the company's business as demand became worldwide, 183 manufacturers paid to use the patent rights.

1907 Riley halted motorcycle production to focus on automobiles. The focus of interest moved from motor cycles to motor cars

1912 the Riley Cycle Company changed its name to Riley (Coventry) Limited as William Riley focused it on becoming a wheel supplier for the burgeoning motor industry.