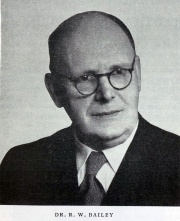 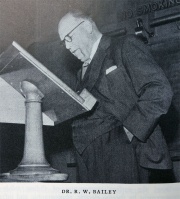 Dr. BAILEY was apprenticed at the Stratford works of the London and North Eastern Railway Company (sic), after which, by arrangement with the L.N.E.R., he became a college apprentice in electrical engineering at the Trafford Park works of the British Westinghouse Electrical and Manufacturing Company.

In 1908 he was appointed lecturer in mechanical engineering at Battersea Polytechnic, but in 1912 he left to become Principal of Crewe Technical College.

From 1919 to 1945 Dr. Bailey was in charge of the mechanical, metallurgical, and chemical sections of the Research Department of the Metropolitan-Vickers Electrical Company, Ltd., where he is now Consulting Research Engineer. He has specialized in research relating to the strength of materials, particularly at high temperatures.

Dr. Bailey was elected a Member of Council in 1942.

R. R. W. BAILEY, Wh.Sc., F.R.S., the new President, served his apprenticeship with the Great Eastern Railway Company's Locomotive Works, Stratford, London, during which apprenticeship he gained both a Whitworth Exhibition and a Whitworth Scholarship. He was also the first 'Director's Scholar' of his Company (inspired by the then Locomotive Superintendent, the late James Holden). This scholarship enabled him to spend two winter sessions at the East London Technical College (now Queen Mary College, London University). The last year of his apprenticeship, and about six months of the Whitworth Scholarship, he spent in the company's works and locomotive drawing offices, together with a short period on the footplate of the coal-tar-burning locomotive of the company's London to Cromer express.

With the intention of taking advantage of the expected electrification of suburban lines, a year's session was spent at the City and Guilds Central Technical College, South Kensington, attending all second and third year electrical engineering subjects, lectures and laboratory work. This was followed by a college apprenticeship in electrical engineering (Whitworth Scholarship) at the works of the British Westinghouse Electric Manufacturing Company, Manchester, the time being spent principally in the drawing and design offices of the turbo-generator, large motor and transformer departments.

In 1908 Dr. Bailey became a lecturer in mechanical engineering in the University Courses at the Battersea Polytechnic, London, and in 1912 he was appointed the first Principal of the Crewe Technical Institute (now Technical. College) which took over, under the Cheshire County Education Authority, the training previously conducted at Crewe Mechanics Institute under the control of the London and North Western Railway Company. In this position he was responsible for the organization of all engineering part-time day and evening courses, and also for the design and installation of equipment in the new engineering laboratories.

In 1919 Dr. Bailey returned to the British Westinghouse Electric Manufacturing Company, at the invitation of Mr. (now Sir Arthur) Fleming, C.B.E., who was then developing the Research Department of his Company, as head of the Mechanical and Chemical Laboratories, which were extended shortly afterwards to include Metallurgical Laboratories. He continued as head of the Mechanical, Metallurgical and Chemical Sections of the Company's Research Department until his administrative duties were relinquished about seven years ago to allow his attention to be given more to research and development and to act as Consulting Research Engineer.

As head of the Mechanical and Metallurgical Sections he was responsible for all important castings and forgings, particularly those for high-duty machinery manufactured by the Company, which in September 1919 became Metropolitan-Vickers Electrical Co., Ltd. In this capacity he developed the closest contact and co-operation with the principal steel-forging and steel-making firms manufacturing important forgings and castings in Great Britain, and, to a lesser degree, had contacts with those on the Continent and in the United States of America.

He contributed to the progress, during the past twenty-five years, in the initial steam temperatures of land power plant, by the development of the theory governing creep behaviour of metals and its application to design principles, and also by the introduction of improved steels for high-temperature service. He discovered the advantage obtained by leaving out nickel from the nickel—chromium— molybdenum steels then commonly used, and was responsible for the first chromium—molybdenum bolt steels for high-temperature service. His investigations of the influence of different carbide-forming elements led to the introduction of molybdenum—vanadium steel. His investigations of the possibilities of this steel in heavy forgings, castings, and small forgings such as turbine blades, established its general excellence as early as 1937, and it was made the basis of design, by Dr. K. Baumann, C.B.E., of the primary turbine of the 100-MW. steam turbine at the Battersea Electric Generating Station. This turbine was installed in ...

THE death occurred on Wednesday, September 4, of Dr. R. W. Bailey, who retired from active duties as consultant to the Metropolitan-Vickers Electrical Company's research department on March 31 this year.

After serving his apprenticeship at the Great Eastern Railway Company's Locomotive Works, Stratford, and taking an electrical engineering course at the City and Gullds Central Technical College, London, R. W. Bailey first joined Metropolitan-Vickers (then British Westinghouse) as a college apprentice in 1907.

After his apprenticeship he forsook industry temporarily when he became a lecturer in mechanical engineering at the Battersea Polytechnic, London, and in 1912 he was appointed the first Principal of the Crewe Technical Institute (now Technical College).

In 1919 he accepted an invitation to return to Metropolitan- Vickers, and took charge of the company's research department laboratory concerned with chemical, mechanical and metallurgical testing. He relinquished executive duties in 1945 to give more attention to special research and development work and to act as Consulting Research Engineer.

For his published work relating to the principles of design, behaviour and properties of metals at elevated temperatures, he earned the degree of D.Sc. (Eng.) of London University in 1936. He was also awarded the Thomas Hawksley Premium in 1929 and the Thomas Hawksley Gold Medal in 1935, by the Institution of Mechanical Engineers, of which he had been an Associate Member since 1922. He became a full member of the Institution in 1936, Chairman of the North Western branch in 1941, a member of the Council in 1942, a vice-president in 1949, and president in 1954.

In 1949 he was elected a Fellow of the Royal Society, and he served on the Society's Council during l951-52.

Richard William Bailey. In his Presidential Address to the Institution of Mechanical Engineers in October 1954, Dr. Richard William Bailey chose as his subject 'Research in Mechanical Engineering', claiming that this was a subject of which he had first-hand knowledge. Few men could better justify such a claim. Those who knew him will recognize in this address the creed which inspired him in his work.

In a research organization, he states, the most important element is the staff, particularly those members responsible for and capable of thinking a stage ahead of current practice. The staff 'should be inspired and actuated by the principle that its purpose and business is to contribute to the engineering progress of the employing firm or organization, not merely to find solutions to isolated problems, but to see a problem or number of problems in their engineering setting, remembering that an 80 or 90 per cent solution, obtained expeditiously, is often of more value both in immediate result and as a contribution to a fuller understanding later, than a prolonged striving for a 100 per cent solution'.

His comment on the qualities of the leader of the staff are even more revealing. 'Primarily he should be an able mechanical engineer, having considerable knowledge and keen interest in the science of engineering and in engineering development', and in addition should have acquired the necessary knowledge of metallurgy. He should be able to extract the utmost in essential information from work and reports, not merely by noting the results, but by hard thinking and reasoning upon the evidence, questioning any dubious interpretation or lack of clarity. He must at all times maintain the closest relations between research and engineering personnel.

In 1919, Dr. Bailey was invited to join the Research Department, then in process of expansion and development, of the British Westinghouse Electrical Company, presently to become the Metropolitan-Vickers Electrical Company. Dr. Bailey took charge of the Chemical Section, which had hitherto been responsible mainly for analyses for the foundry and for some rudimentary mechanical and metallurgical testing.

To this task, he brought considerable natural aptitude, reinforced by a sound basic training in mechanical and electrical engineering, some experience in lecturing (Battersea Polytechnic), and several years of planning and administrative experience as the first Principal of the Crewe Technical Institute.

In his new work he at once established close relations with those responsible for mechanical engineering design, and the pursuit of their requirements brought him into contact with the most important manufacturers of steel forgings and castings in Britain and elsewhere. In this way, familiar with and able to contribute to the most advanced thinking of designer and steel manufacturer, he forged a link between them which has proved of the greatest value.

Dr. Bailey will probably be best remembered for his work on the behaviour of steels and similar materials under stress at high temperatures - work on which he was actively engaged from the pioneer days of 1924 until the time of his retirement. To this end he undertook, with skilfully devised apparatus, investigations involving accurate testing over long periods at high temperatures. As the testing proceeded and data became available, his judgment and intelligent extrapolation indicated fresh lines of investigation and gradually made possible a fuller understanding of the behaviour of materials under these conditions. At the same time, by repeated experiment in the modification of thermal treatment and of alloying elements he was responsible for the production of materials better suited for use under stress at elevated temperatures.

His work was not by any means confined to the properties of materials. He made, for example, extensive studies of the performance and design of combinations of steam and internal combustion engines, especially for marine applications, and on this subject delivered the Eighteenth Andrew Laing Lecture to the North East Coast Institution of Engineers and Shipbuilders.

He was an untiring worker: inventor of about 90 British Patents, author of at least 35 published papers, he gave freely of his time to various technical committees and to the Institution of Mechanical Engineers, of which he was President in 1954.

He received the Thomas Hawksley Premium and the Thomas Hawksley Gold Medal from the Institution of Mechanical Engineers, was awarded the degree of Doctor of Science by the University of London, and was elected Fellow of the Royal Society and an Honorary Associate of the Manchester College of Technology.

But by his colleagues and by his many friends, R. W. Bailey will be remembered for the charm of his personal character, his ready wit and his unaffected goodwill; for these neither the years nor his many honours ever changed.

Genial and very approachable, he was never too busy to be consulted. Any problem he approached with almost boyish enthusiasm. His optimistic and friendly approach were of themselves sufficient to show the problem in a different light, and when to these were added his ever ready fund of knowledge and experience, any discussion with him was well worth-while. Small wonder that he had many friends.