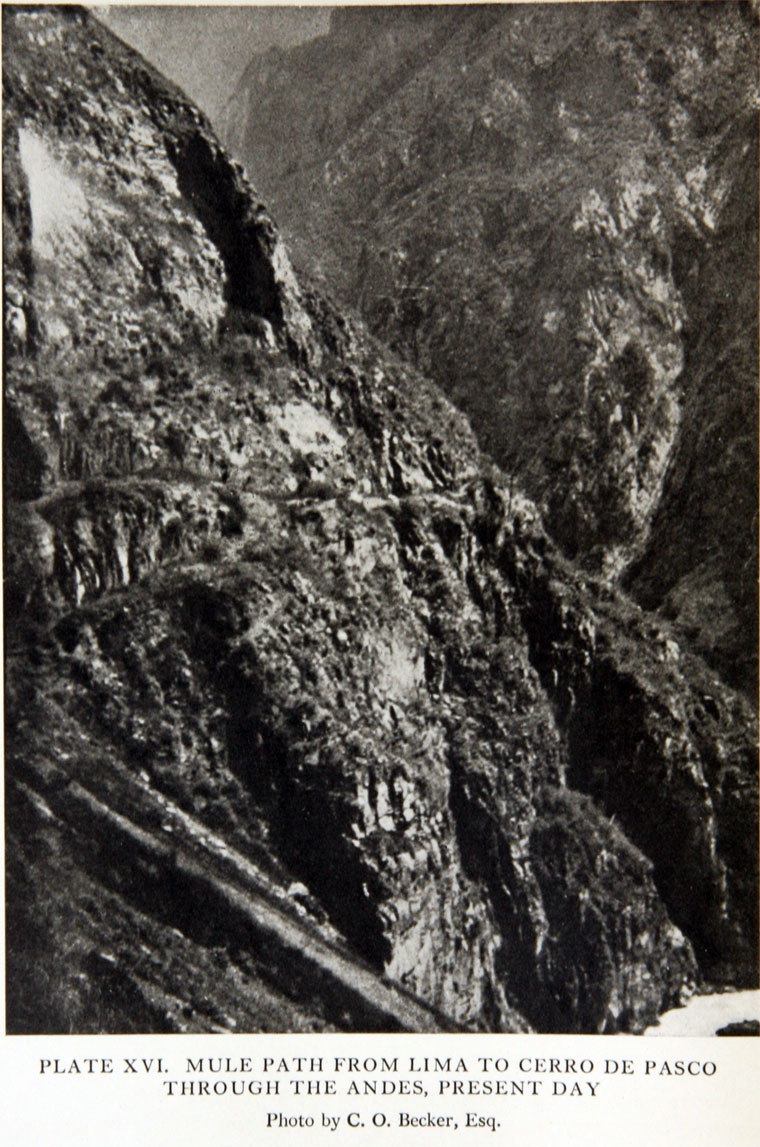 Mule route through the Andes.

c1826. The route across Nicaragua.

Note: This is a sub-section of Richard Trevithick

In 1811 draining water from the rich silver mines of Cerro de Pasco in Peru, at an altitude of 14,000 feet, posed serious problems for the man in charge, Don Francisco Uville. The low pressure condensing engines by Boulton and Watt developed such little power as to be useless at this altitude and anyway they could not be dismantled into sufficiently small pieces to be transported there along mule tracks. Uville was sent to England to investigate using Trevithick's high pressure steam engine. He bought one for 20 guineas, transported it back and found it to work quite satisfactorily.

1816 October 20th. Trevithick left Penzance on the whaler ship Asp accompanied by a lawyer Page and a boilermaker bound for Peru.

He was received by Uville with honour initially but relations soon broke down and Trevithick left in disgust at the accusations directed at him.

He travelled widely in Peru acting as a consultant on mining methods. The government granted him certain mining rights and he found mining areas, but did not have the funds to develop them, with the exception of a copper and silver mine at Caxatambo.

After a time serving in the army of Simon Bolivar he returned to Caxatambo but due to the unsettled state of the country and presence of the Spanish army he was forced to leave the area and abandon £5,000 worth of ore ready to ship.

Uville died in 1818 and Trevithick soon returned to Cerro de Pasco to continue mining. However the war of liberation denied him several objectives.

After leaving Cerro de Pasco and they passed through Ecuador on his way to Bogotá in Colombia. He met a certain James Gerard who informed him of potential mining opportunities in Costa Rica.

1823 The two men resolved to investigate these possibilities and they visited a range of sites in Costa Rica, identifying and securing the rights for a number of gold and silver prospects. They also planned a route from the Pacific to the Atlantic coast with the idea of building a railway across the country. The party in Costa Rica comprised Trevithick, Gerard, two schoolboys on their way to school in Highgate and seven natives, three of whom returned home after guiding them through the first part of their journey. The journey was treacherous - one of the party was drowned in a raging torrent and Trevithick was nearly killed on at least two occasions. In the first he was saved from drowning by Gerard and in the second he was nearly devoured by an alligator following a dispute with a local man whom he had in some way offended.

1827 In Cartagena Trevithick met Robert Stephenson who was on his way home from Colombia. It had been many years since they last met when Stephenson was just a baby. Stephenson gave Trevithick £50 to help his passage home.