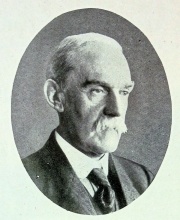 Sir Richard Tetley Glazebrook (1854-1935) was an English physicist and Director of the National Physical Laboratory.

1854 September 18th. Born in West Derby, Liverpool, Lancashire, the son of a surgeon.

He was educated at Dulwich College until 1870, Liverpool College from 1870 to 1872, and Trinity College, Cambridge, from which he graduated in Mathematics in 1876 and of which he was elected a fellow in 1877. He studied physics under James Clerk Maxwell and Lord Rayleigh at the new Cavendish Laboratory and in 1880 was appointed a demonstrator at the laboratory. The following year he was also appointed a college lecturer in mathematics and physics and a university lecturer in mathematics. His research focused on electrical standards and aviation.

1883 Married Frances Gertrude Atkinson of Leeds and they had a son and three daughters.

He hoped to succeed Rayleigh as Cavendish Professor of Physics in 1884, but was surprisingly (given that he was also Rayleigh's choice) passed over in favour of Sir J. J. Thomson, which was a great disappointment to him. He was, however, appointed Assistant Director of the Cavendish in 1891 and Bursar of Trinity College in 1895.

In 1898 he was appointed Principal of University College, Liverpool.

In June 1899, however, he left to become first Director of the National Physical Laboratory in Teddington. He held the post until his retirement (largely due to friction with the Department of Scientific and Industrial Research) in 1919, successfully establishing the NPL as a world leader in physics research.

Following his retirement, he moved back to Cambridge and edited the Dictionary of Applied Physics. From 1920 to 1923 he was Zaharoff Professor of Aviation and Director of the Department of Aeronautics at Imperial College, London. He remained on the General Board of the NPL and chaired the Executive Committee from 1925 to 1932.

1923 He was elected a member of the Institution of Civil Engineers.[1]

Sir RICHARD TETLEY GLAZEBROOK, K.C.B., K.C.V.O., F.R.S., who was elected an Honorary Life Member of the Institution in 1919, in view of the distinguished services which he had rendered to science and aviation, was the founder and first director of the National Physical Laboratory at Teddington, and was for twenty-four years chairman of the Advisory Committee for Aeronautics (later known as the Aeronautical Research Committee).

He was born in Liverpool in 1854 and obtained a scholarship at Trinity College, Cambridge, in 1872, subsequently graduating as fifth Wrangler. He then became assistant demonstrator at the Cavendish Laboratory and was later appointed assistant director.

In 1882 he was elected a Fellow of the Royal Society. He made determinations of fundamental electrical units and was for many years secretary of the Electrical Standards Committee of the British Association. Later, he made determinations of electrical units for the Board of Trade. Following the establishment of the National Physical Laboratory in 1899, he was selected as first director. The laboratory was formally opened in 1902, with a staff numbering twenty-six; on Sir Richard's retirement in 1919, the number had risen to 600. Although primarily a physicist by training, Sir Richard began to be increasingly concerned with engineering problems. His appointment as chairman of the Advisory Committee for Aeronautics took place in 1909, and in that connexion he had great responsibilities during the War. He was made a Companion of the Bath in 1910, was knighted in 1917, and created K.C.B. in 1920. In 1933 he was also created K.C.V.O.

After the War he became Zaharoff professor of aviation and director of the department of aeronautics at the Imperial College of Science and Technology, retiring from that position in 1923. For three years he acted as foreign secretary to the Royal Society.

In 1933 he retired from his chairmanship of the Aeronautical Research Committee, and lived at Limpsfield, Surrey, where his death occurred on 15th December 1935. Sir Richard was the recipient of many honours, including honorary degrees at the Universities of Oxford, Edinburgh, Manchester, and Heidelberg. He was twice awarded medals by the Royal Society, and was a medallist of the Royal Society of Arts and of the Royal Aeronautical Society. He twice delivered lectures before the Institution, these being the Lecture to the London Graduates' Section in 1903, and the Thomas Hawksley Lecture in 1920.

He was an honorary life member of the Institution of Civil Engineers, and a past-president of the Institution of Electrical Engineers. In addition, he was a past-president of the Physical Society, and of the Optical Society. His best-known book is probably his textbook on physics; but he was the author of a large number of papers on physical subjects and the editor of the "Dictionary of Applied Physics," published in 1922.