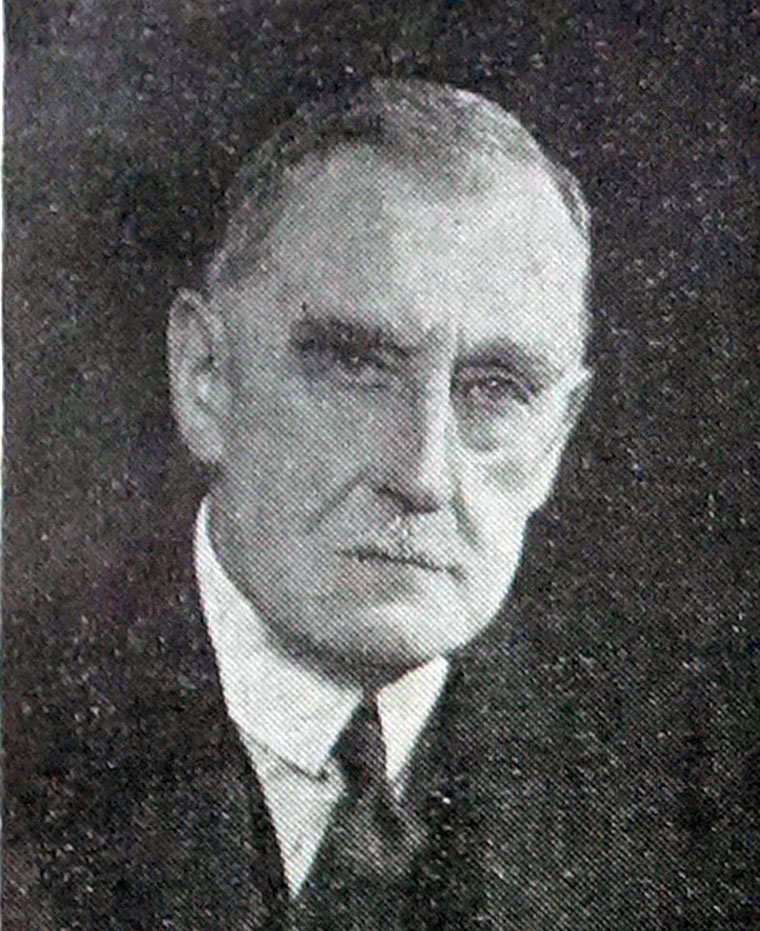 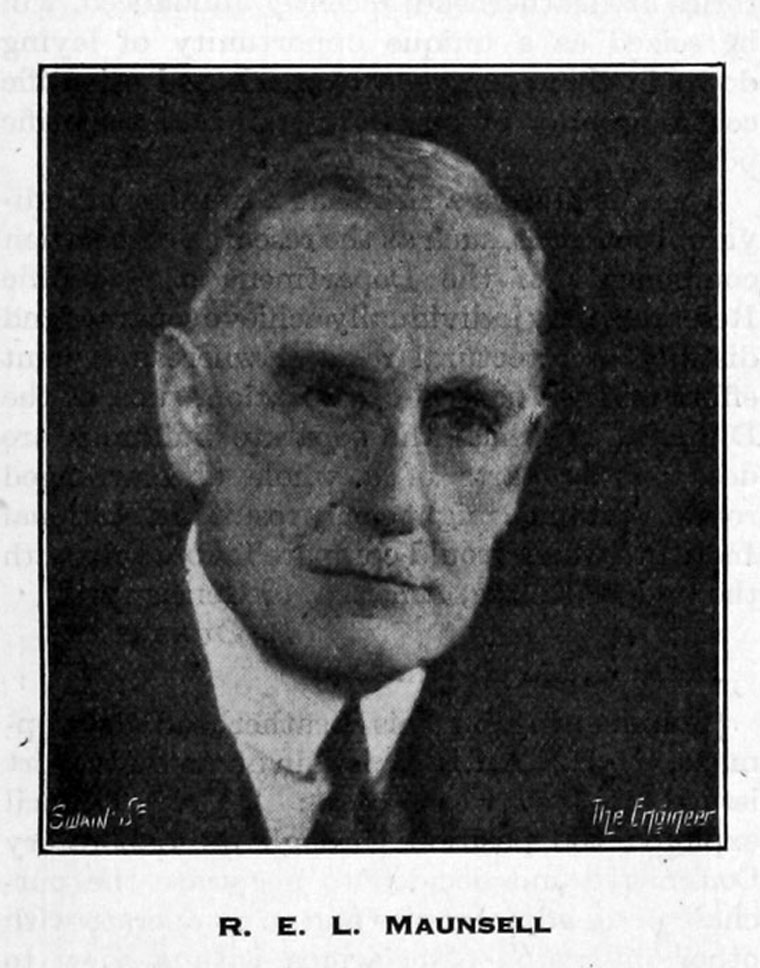 Richard Edward Lloyd Maunsell (1868-1944) held the post of Chief Mechanical Engineer (CME) of the Southern Railway in the England from the time of the 1923 Grouping until 1937.

1868 May 26th. Born at Raheny, County Dublin in Ireland. After graduating from Trinity College, Dublin, he began an apprenticeship at the Inchicore works of the Great Southern and Western Railway (GSWR) under Henry Alfred Ivatt in 1886, completing his training at Horwich on the Lancashire and Yorkshire Railway (as Nigel Gresley had done before him). At Horwich he worked in the drawing office, before occupying the post of locomotive foreman in charge of the Blackpool and Fleetwood District. From there he went to India in 1894, as Assistant Locomotive Superintendent of the East India Railway, being subsequently District Locomotive Superintendent of the Asansol District.

He returned in 1896 to become works manager at Inchicore on the GSWR, moving up to become Locomotive Superintendent in 1911.

In 1913 he was selected to succeed the Harry Wainwright as CME of the South Eastern and Chatham Railway. When that line was incorporated in the new Southern Railway, he became Chief Mechanical Engineer of the latter, retiring in 1937.

Among his many achievements was the introduction of the 4-6-0 SR Lord Nelson Class locomotives and also the SR Class V or Schools Class, which were the ultimate and very successful development of the British 4-4-0 express passenger type. He also introduced pulverised fuel equipment, and new types of valve gear.

RICHARD EDWARD LLOYD MAUNSELL, M.A., C.B.E., T.D., was born at Raheny, Co. Dublin, in May 1868, and was the seventh son of John Maunsell, of Raheny. He was educated at Armagh Royal School and at Trinity College, Dublin, where he graduated B.A. in 1891 and later received the degree of M.A.

His engineering training began in 1888 with a three years' pupilage at the Inchicore Works of the Great Southern and Western Railway, Ireland, under Mr. H. A. Ivatt and later he became a pupil, for a year, at the Horwich Works of the old Lancashire and Yorkshire Railway under the late Mr. (afterwards Sir) John A. F. Aspinall.

In 1892 he was appointed locomotive foreman in charge of the Blackpool and Fleetwood district, until in 1894 he elected to go abroad and obtained the position of an Assistant Locomotive Superintendent on the East Indian Railway. Here he was in charge of the Asansol section as district locomotive superintendent. He had only been installed here about two years when Mr. Robert Coey, chief mechanical engineer of the Great Southern and Western Railway, offered him the post of works manager, at Inchicore, Dublin, which Mr. Maunsell accepted and afterwards held for fifteen years. During this time he rearranged and did much to modernize the works and to improve their production capacity.

Mr. Maunsell succeeded Mr. Coey in 1911 as chief mechanical engineer. In December 1913 he was appointed locomotive, carriage, and wagon superintendent of the South Eastern and Chatham Railway, taking up his headquarters at Ashford Works, Kent, where he was to begin his rise into British railway engineering fame. Here was at once a task and work to his heart's desire where his skill and ability as a locomotive engineer and as an administrator of front rank could play their full part.

The advent of war in August 1914 far from checking his career, only served to provide opportunities for the display of his resourcefulness in emergency. Undaunted he proceeded with the designs of two new classes of locomotive, the 2-6-0 class "N" freight tender engine and the 2-6-4 class "K" passenger tank engine. In addition he used every means to assist the British and Allied cause, making several journeys on behalf of the War Office to ascertain the railway needs of the fighting front in France, while at the same time he kept the interest of the railway before him and improved the efficiency of the works at Ashford and its products. So by the end of hostilities, he had one each of the new engines mentioned, ready for work and being tested in actual service. The war years over, Mr. Maunsell was entrusted by the Association of Railway Locomotive Engineers with the important task of producing designs of locomotives to be regarded as standard for the British Railways. This project was already well advanced when the amalgamation of the railways into four groups in 1923 made it unnecessary to proceed in the matter.

During the 1914-1918 War, the Anti-aircraft defences of London were in charge of Admiral Sir Percy Scott, who for this purpose had designed a suitable 3-inch Gun-mounting to be towed behind a motor lorry. In his book "Fifty years of the Royal Navy", Sir Percy writes: "By a stroke of good luck I met Mr. R. E. L. Maunsell, C.M.E. of the South Eastern and Chatham, Ry. Company who when approached grasped the idea at once. The mounting was produced at Ashford Works with remarkable rapidity and proved very effective". For these and other war services, Mr. Maunsell was created C.B.E. in 1918.

In 1923 the newly formed Southern Railway appointed Mr. Maunsell as chief mechanical engineer and he took up his headquarters at Waterloo Station. Here he became known to a large circle of business friends and acquaintances as a man whose word was indeed his bond. Keen in perception, quick to size up a situation, and equally quick in making decisions, his judgements were always of a high order and scrupulously fair to those concerned. Fair play was with him always a "jewel" and he had the happy knack of inducing this spirit in those who worked closest to him, so that they gave of their very best.

As a chief mechanical engineer, he was first, and perhaps foremost, most noteworthy for his powers of organization and of executive ability in the department over which he presided. With an ordered habit of mind, he had a flair for bringing order out of chaos so successfully that afterwards one found it hard to believe that things had ever been otherwise. As a locomotive engineer he was a man of very definite opinions as affecting locomotive design, and he clearly left his mark on the locomotive stock of the Southern Railway. He arranged that he should be kept informed of all mechanical failures of the engines so that careful consideration could be given to prevent a recurrence. When considering the details of design, he would often remark to those concerned, "Make it as simple as possible" but above all "let it be fool-proof in use".

His first locomotives on the South Eastern and Chatham Railway had superheaters and were a break-away from that railway's inside-cylinder tradition; their outside cylinders and simple and straightforward arrangement were characteristic. On the Southern Railway, he was responsible for the improved "Uric" design which as the King Arthur class have been eminently successful. Mr. Maunsell's own creations include the unique 4-6-0 four-cylinder Lord Nelson class which have their four cranks at 135 deg. giving eight impulses per revolution; while the 4 4 0 three-cylinder Schools class is often regarded as one of the most handsome and successful light passenger engines ever introduced in this country. Always anxious to be abreast of the times, he experimented with many new ideas – pulverized-fuel equipment, a conjugated form of valve gear for the three-cylinder engines, and trials of a special form of valve-gear by Mr. J. T. Marshall. One engine was fitted with a novel system of condensing in which the working fluid operated on a closed circuit. Apart from the steam locomotive, carriage, and wagon stock and the large amount of electric carriage stock on which he left his mark, the reorganization of the locomotive, carriage and wagon works at Ashford and Eastleigh and the establishment of repair shops to deal with the various types of motor vehicles for road transport during his regime, was no mean achievement.

The welfare of his staff was always his personal concern and he was ever ready to support and advocate any movement to further their educational as well as their recreational interests. The education of works apprentices and the training of young engineers found in him a friend and supporter, and he was a live and useful member of the Education Committee of the Institution of Mechanical Engineers.

Mr. Maunsell was elected a member of the Institution of Mechanical Engineers in February 1893 and was made a Member of Council in 1923 becoming a Vice-President in 1932 and an Honorary Member in 1938. He was a Past President of the Institution of Locomotive Engineers, having held that office in 1916 and again in 1928, and was also a foundation member and past member of council of the Institute of Transport. He retired from active service with the Southern Railway in November 1937 and died on March 7th 1944 in his seventy-sixth year.