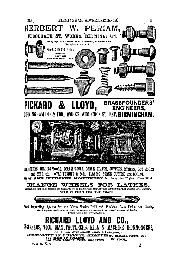 1925 Acquired the goodwill of Stockton and Bunn (in liquidation) of 11, Queen Victoria-street, London. which was maintained as a London office.[2]

2008 In October 2008, the 200 year old business went into administration and ceased trading.[8] Some of the assets, such as those relating to the "Galtona" brand of threading machine taps, were acquired by T-Tech Tooling Ltd. from the receiver.[9]

Apprenticed in one of the family's Ironworks - at the age of 31, Richard Lloyd set up his own Ironmongers business. Since the Napoleonic wars were in full swing, and Birmingham gunsmiths provided seventy percent of all Britain's arms, he had a ready market.

The name "Richard Lloyd - Ironmongers" first appeared in the Birmingham Directory, at 135 Steelhouse Lane, in 1858. Steelhouse Lane was the site of crucible steel furnaces since circa 1770.

Richard Lloyd branched out into Toolmaking in 1862 and had a well-established trade, both home and export, by 1869.

The Lloyds' sold the business to Walter Shaw in 1873, and he remained the owner until 1918. In 1896 the company launched a new line of 'Galtona' machine-belting.

A new toolmaking venture was formed with Joseph Pickard (also founded in 1803) - "Pickard and Lloyd" - in 1899, but by 1901 Shaw had bought Pickard out and reverted to Richard Lloyd. At the same time Richard Lloyd started its interest in grinding wheels, with an agreement to market the 'Carborundum' brand. This association continued until 1985.

In 1908, a Richard Lloyd subsidiary - Shaw Motor Accessories - commenced the relationship with Automotive OEM's which continued into the 21st century.

By 1914 Richard Lloyd was also engaged in the manufacture of lathes and other machine tools and in 1918 they were registered as "Tool Makers and Mill Furnishers".

World War II saw Richard Lloyd under the control of the Ministry of Supply and an enforced move to a "safer" location at Tenbury Wells, Worcestershire, in order to protect the irreplaceable facilities involved in war work, and a new 100,000 sq.ft. factory was built.

In the mid 1950's Richard Lloyd became a subsidiary of British Rollmakers.

With the dawn of the "throw-away tip" for the cutter market, Richard Lloyd diversified and purchased Tungsten Electric Co. Ltd (TECO) in 1967. TECO supplied tungsten carbide to Richard Lloyd for finish machining.

In 1970, Richard Lloyd was purchased by Johnson and Firth Brown, a major steel-making company, and was eventually sold to a Tenbury Management Team in 1985. In 1989, the buy-out team sold Richard Lloyd to Howle Holdings.