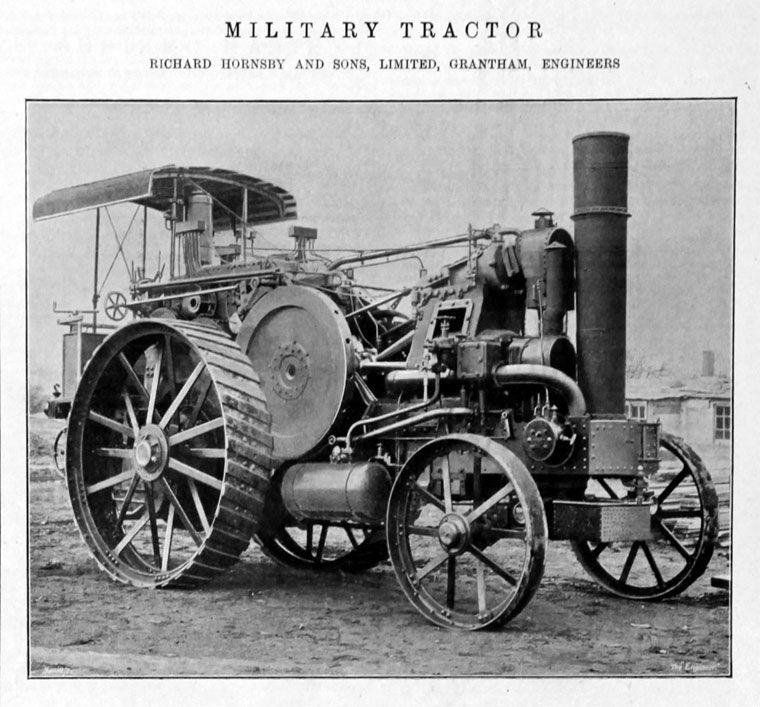 Note: This is a sub-section of Richard Hornsby and Sons.

Messrs. R. Hornsby and Sons, of Grantham, commenced the manufacture of traction engines about 1864.

Their first road engines were made to the plans patented by Messrs. Hornsby, Bonnall and Astbury, dated July, 1863.

This patent engine had two cylinders placed between side plates, and fixed beneath a locomotive multi-tubular boiler. The cylinders were arranged with trunks, or hollow piston-rods, passing through both ends of the cylinder covers. The small ends of the connecting rods were attached in the middle of the trunks, on the centre line of the pistons. No slide bars were required, and good long connecting rods could be adopted, and at the same time allow the cylinders to be pretty close to the crankshaft. The cylinders were placed beneath the smoke-box, and by this arrangement of engine, the cylinders, crankshaft, gearing, and countershaft could be nicely accommodated beneath a short boiler barrel. Carriages for the two above-named shafts were fixed to the deep side plates (railway locomotive fashion). Motion was communicated from the crankshaft to the countershaft by spur gearing; and from the counter-shaft to the driving axle by a pitch chain of novel construction. The main axle was placed across the fire-box front, beneath the fire-hole door, and mounted on volute springs in a similar manner to some of the modern plans. The working parts of the engine were all neatly boxed in, to protect the wearing surfaces from the dust. The engine was provided with a fly-wheel on the crankshaft, brake on the axle, and the engine presented a neat and trim appearance. One of this type was sent to Natal.

During later years Messrs. Hornsby have entered extensively into the manufacture of traction engines, for farm and other purposes, on the simple or the compound principle. We may briefly name the following good points relating to their narrow-gauge traction engines. The brackets are all bolted to wrought-iron plates, which are riveted to the boiler, avoiding the risk of leakage. The driving pinions are fitted on solid keys on the crankshaft, so that badly fitted keys are avoided. The engines are made unusually narrow in width by an improved arrangement of the gearing. We shall refer to Burrell and Edwards's clutch gear presently. The brake disc is cast with the left-hand road wheel, so that it cannot be rendered useless by the driving pins coming out. When the engines are used for driving machinery from the fly-wheel, the belt may be carried in either direction, this is, past the smoke-box, or past the tender, running quite clear.

Messrs. Hornsby and Sons make road locomotives either simple or compound, and by their courtesy we are enabled to show their most recent type, as per Fig. 98. The illustration represents their six-horse power nominal compound road locomotive. The cylinders are 5 in. and 8 in. diameter, and 12 in. stroke. The driving wheels are 6 ft. diameter and 14 in. on face, and the leading wheels are 4 ft. diameter and 9 in. wide.

An engine of this size and type was recently fitted by Messrs. Hornsby with Messrs. Aveling and Porter's Patent Spring Wheels, which were a complete success. Our readers will remember that these wheels consist of an inner ring or tyre attached to the spokes, and suspended within an outer ring or tyre by springs suitable to resist either a tension or compression. The springs are held by worm pieces screwed into the coils, and carrying eye-bolts at each end, one bolt is attached to each spoke, and the other eye-bolt of each spring is attached to the outer tyre. When the wheels are used as drivers the springs are all under tension or compression. Fig. 98 shows an engine mounted on the wheels of the ordinary construction. Returning to the description of our illustration the slow gearing ratio is 22.6 to 1; the fast gearing ratio is 12.75 to 1. The engine is fitted with Messrs Burrell and Edwards's patent clutch gear. Fig. 99 shows a side view of the gearing, and Fig. 100 gives a plan of the arrangement. These blocks are kindly supplied by the proprietors of Engineering,

The following is a description: — "According to the plan the fast-speed pinion A on the crankshaft is placed inside and nearest the bearing; the slow-speed pinion B outside it. The two pinions are held laterally by forks C and D, which fit into grooves turned in their bosses, the other ends of the forks sliding on a round bar E. which is attached to a bracket K, mounted on the side frame P. The forks just mentioned have projections T and U on their backs, as shown, while a horizontal plate F swivelling on a pin X, and capable of being moved by a small handle V, is arranged so that its ends can engage with the projections T and U on the sliding forks C and D respectively, thus holding either of them stationary. A lever H, having one end working on a pin on the fork C and the middle on a pin on the fork D, is used for sliding the pinions in and out of gear, the action being as follows: —With the parts in the position shown in the engravings, both pinions are out of gear, and the locking plate F is holding the fork C, and consequently the pinion A. On taking out the pin W the lever H can be moved to N, thus moving the fork D and its pinion B into gear, the fork (being held stationary by F) the pin on it acting during this movement as the fulcrum to the lever H. If, however, on the other hand, it is desired to put the pinion A into gear, the locking-plate F must be pulled back by V, when the other end of it will engage U and hold the fork D and its pinion B stationary and out of gear. Under these circumstances the pin Y on the fork D acts as a fulcrum to the lever H which can be then moved to O, sliding the fork C and its pinion A into gear.

It will be noticed that with this arrangement both pinions cannot be placed into gear at the same time, as the plate F is so arranged as to lock one fast, while the other is free to be moved. The whole device is very neat and simple, and it has the advantage that only one lever is employed to shift the pinions.

It is very well known by traction engine experts, that the plan so often adopted by traction engine makers, of causing the slow gear pinion to slide inside the fast gear, in order to get both of them as near the bearing as possible when driving, has one great fault among others, viz., the fast gear pinion is made too large, giving too much difference in the gearing ratios between the slow gear and the fast gear consequently the fast speed gearing is much too fast to be of any practical use. Now, by the adoption of this patent gear this difficulty is obviated, the large pinion is placed nearest the bearing and can partly slide over it, while the small pinion is moved out of gear by sliding outwards, therefore these pinions can be made exactly the size found to be most useful in practice Suppose, for instance, that 12.5 to 1 and 25.0 to 1, were the fast and slow speed ratios adopted by a firm using the faulty plan of one pinion sliding inside the other, it is well known that 15 to 1 and 25 to 1 would give far better results, and could be adopted by using the device we have just described. We may note here, that those makers who arrange some of the gearing between the bearings, and have two counter-shafts, can also adopt any proportions of pinions required. But Messrs. Burrell and Messrs. Hornsby urge that a second countershaft is of doubtful utility. We reserve our views for the present, and leave our readers to form their own opinion on this point.

Referring to Messrs. Hornsby's road locomotive shown by Fig. 98, it will be noticed that the fore tank is placed beneath the boiler barrel and fills up the space between the saddle plate and the front axle. At the fire-box end room is provided for the steerage shaft and chains to run clear of the tank, a dotted line on the drawing shows the end of the tank. An opening is cut in the side of the tender, which renders access to the foot plate far easier than when the engine driver has to climb over the side. The draw-bar takes hold of the horn plates of the boiler as shown. By the arrangement of the weigh-bar shaft being placed close to the cylinder, long eccentric rods are obtained, which is a great advantage, a much better distribution of the steam is effected thereby. One bracket carries the four guide bars and the governors. Only one countershaft is used; Burrell and Edward's clutch gear, described and illustrated by Figs. 99 and 100, is applied. The engine presents a very neat appearance, the design having been very carefully worked out. Engines of this type are sure to be appreciated.

Note: Mr. R. Edwards was for several years chief draughtsman for Messrs. Burrell and Sons, and he now occupies the position of engineer at Messrs. Hornsby's works.