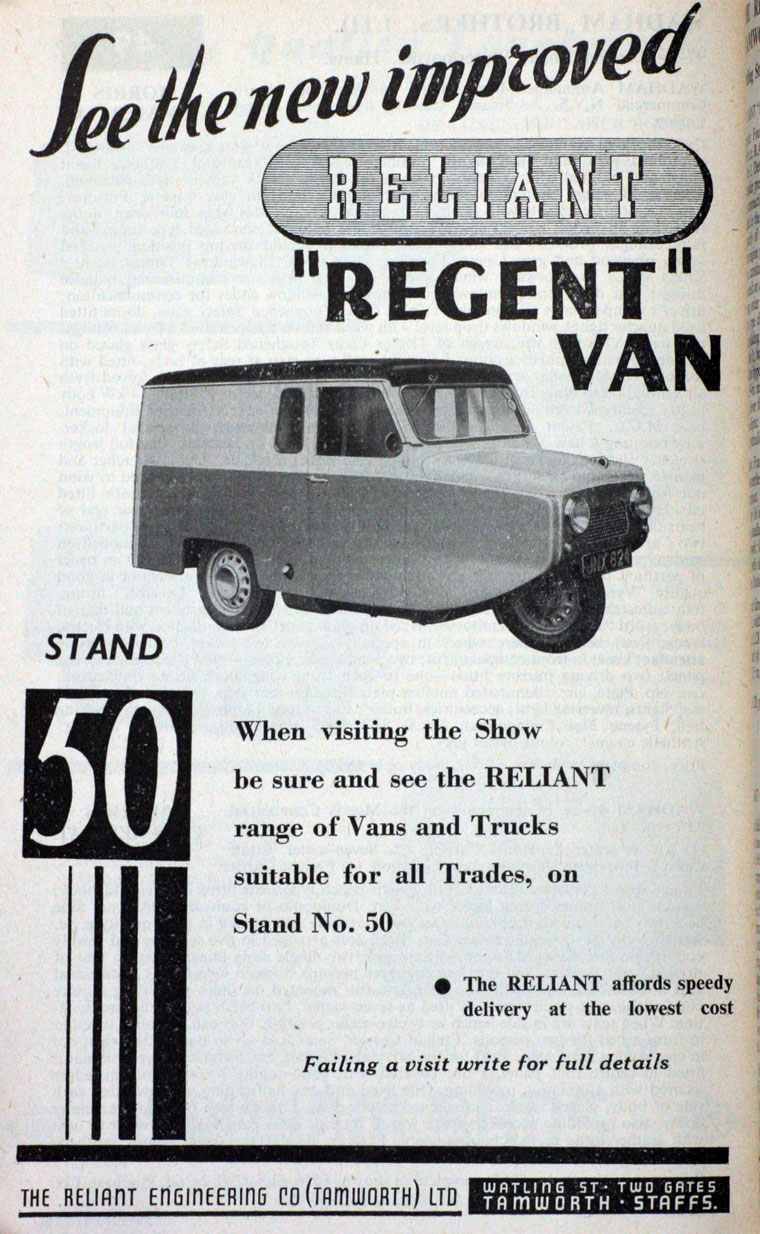 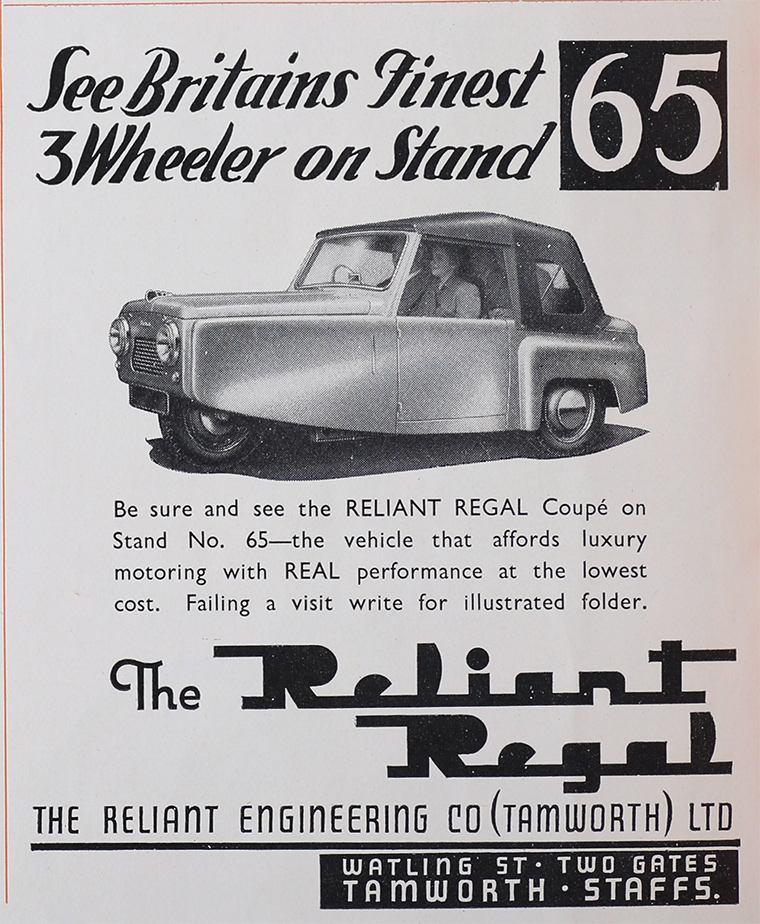 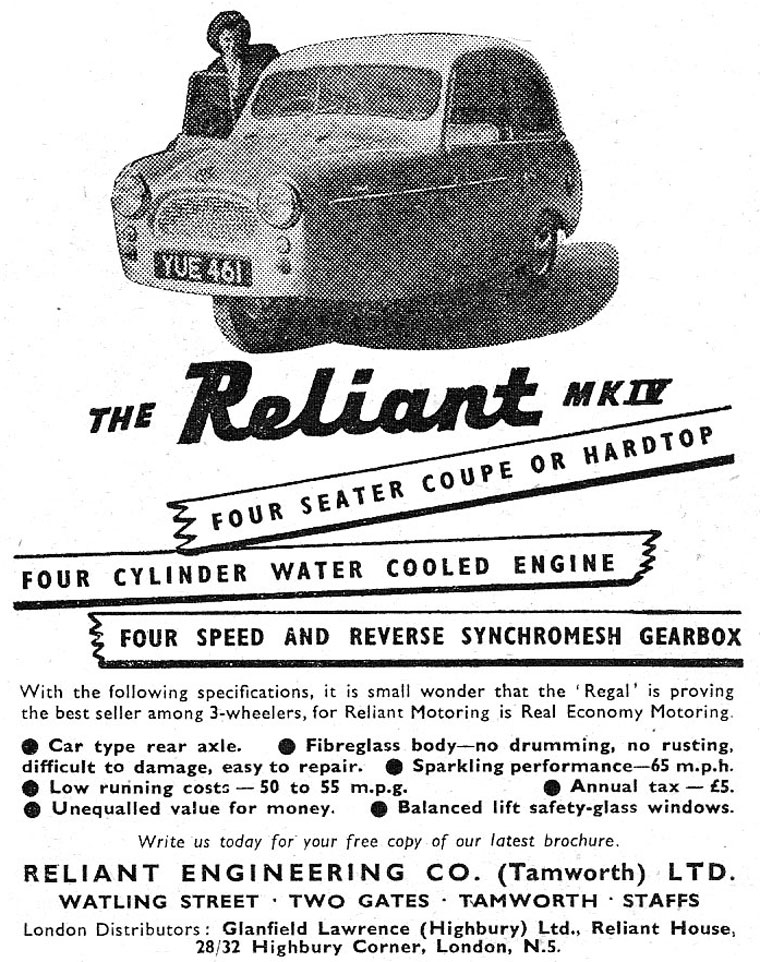 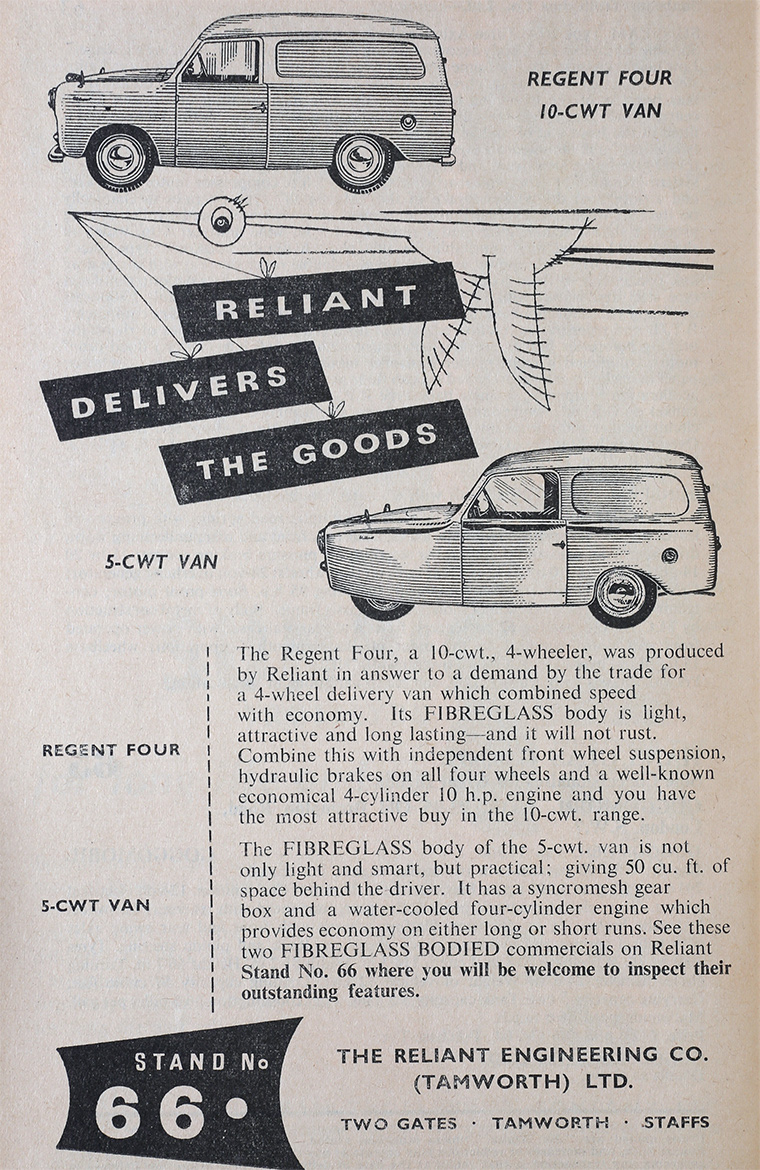 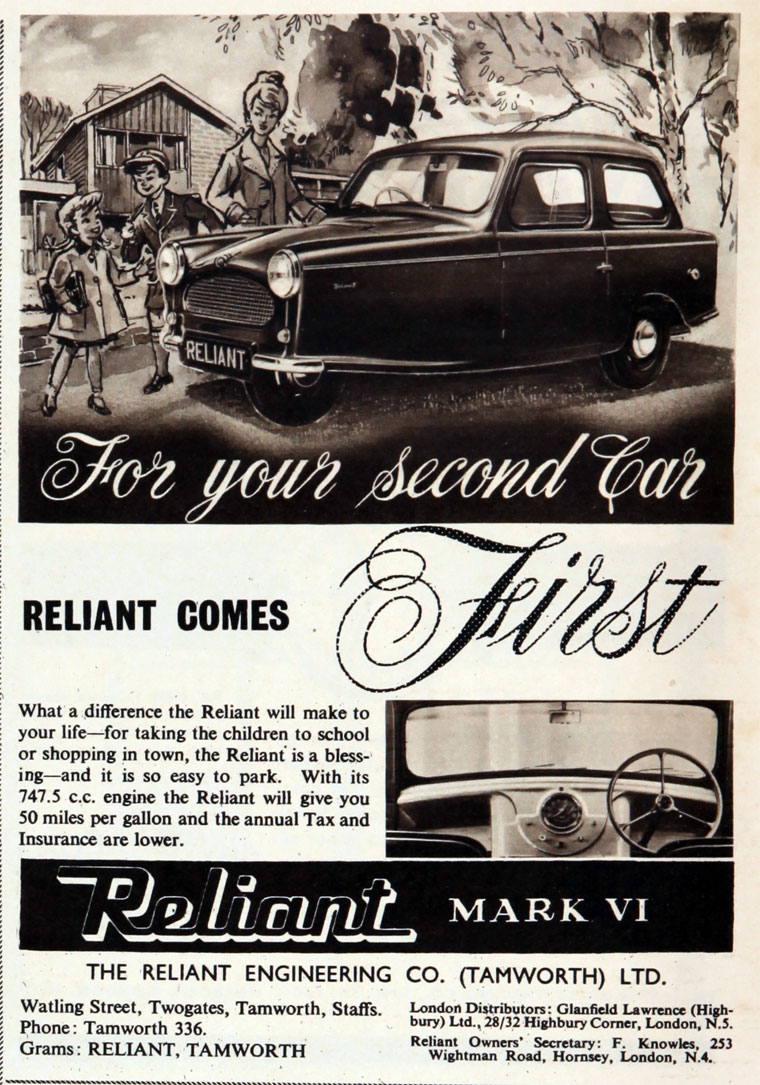 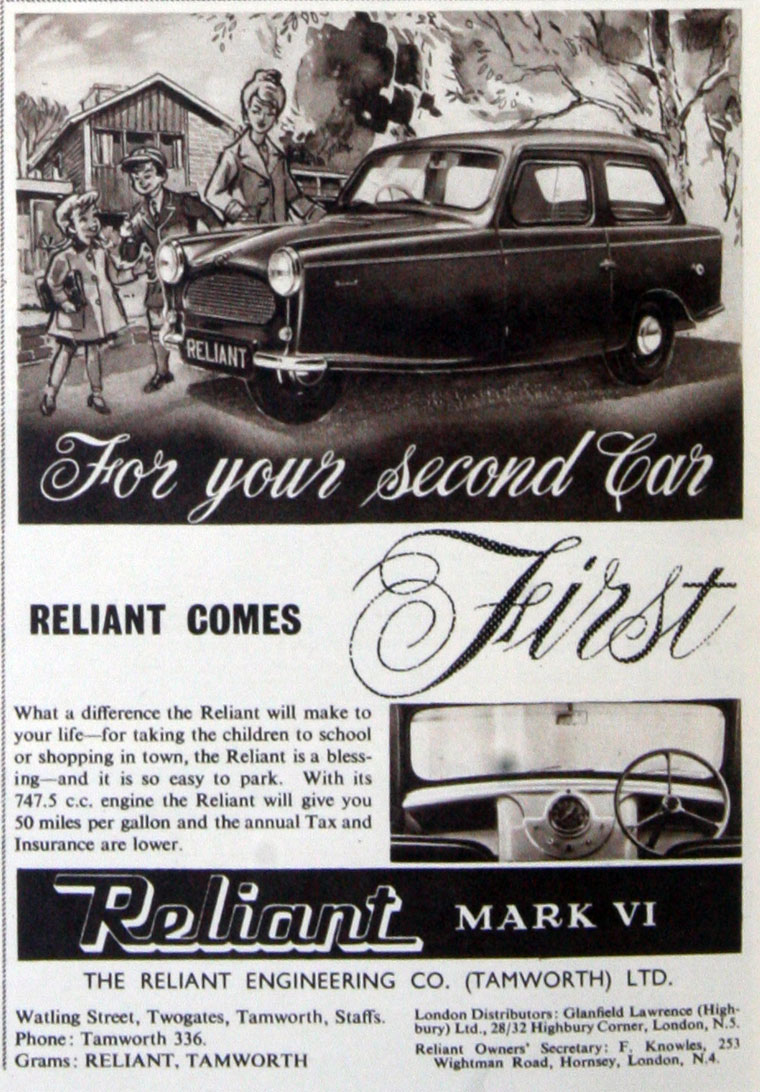 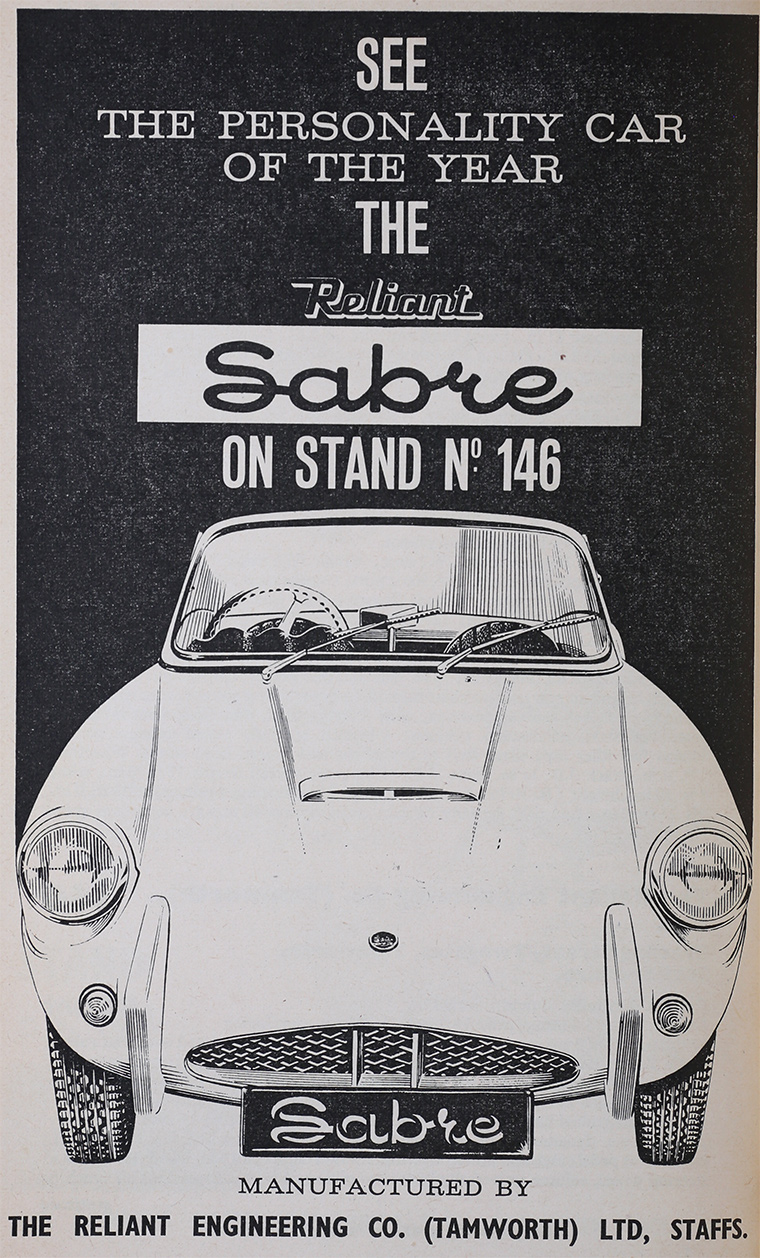 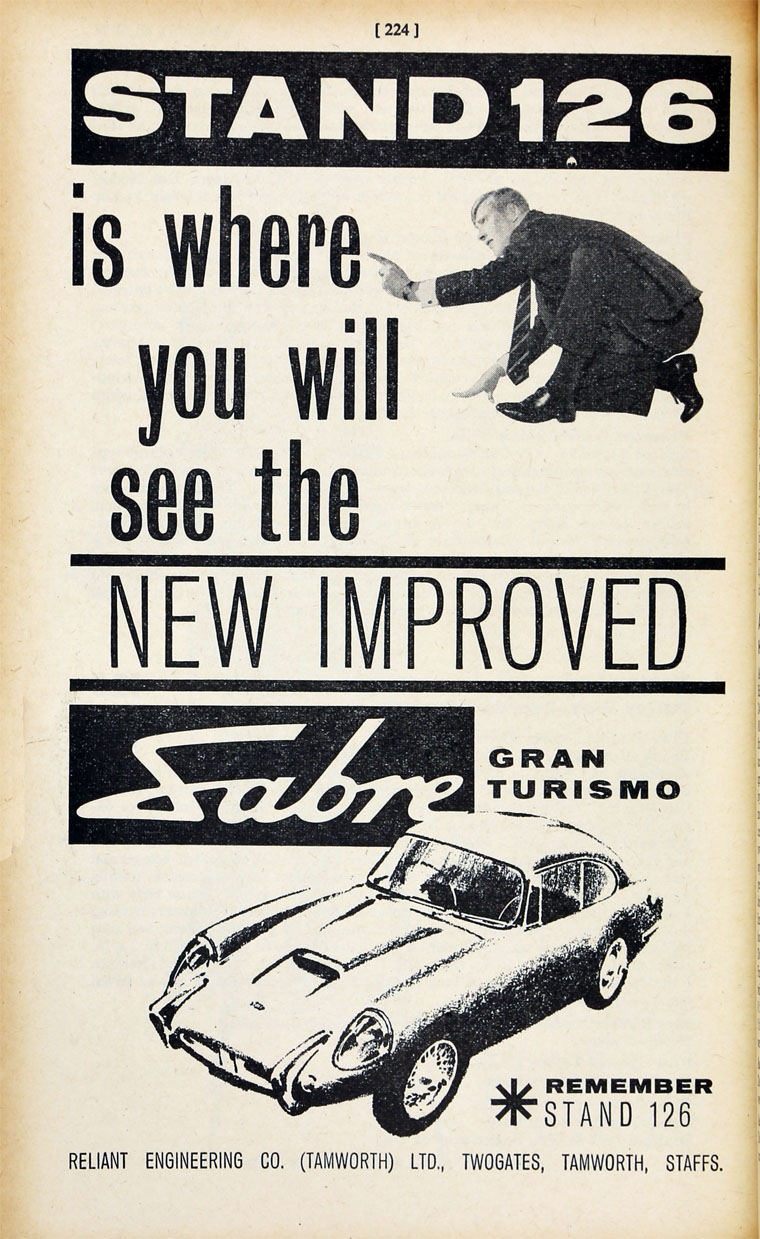 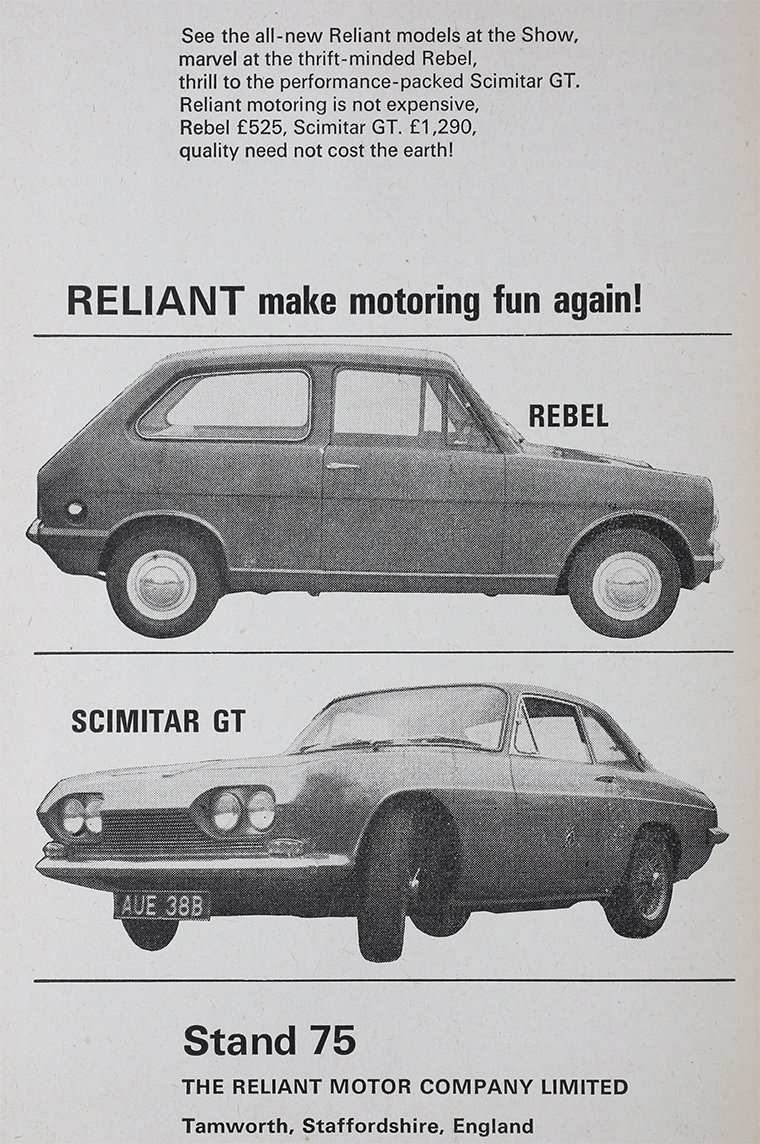 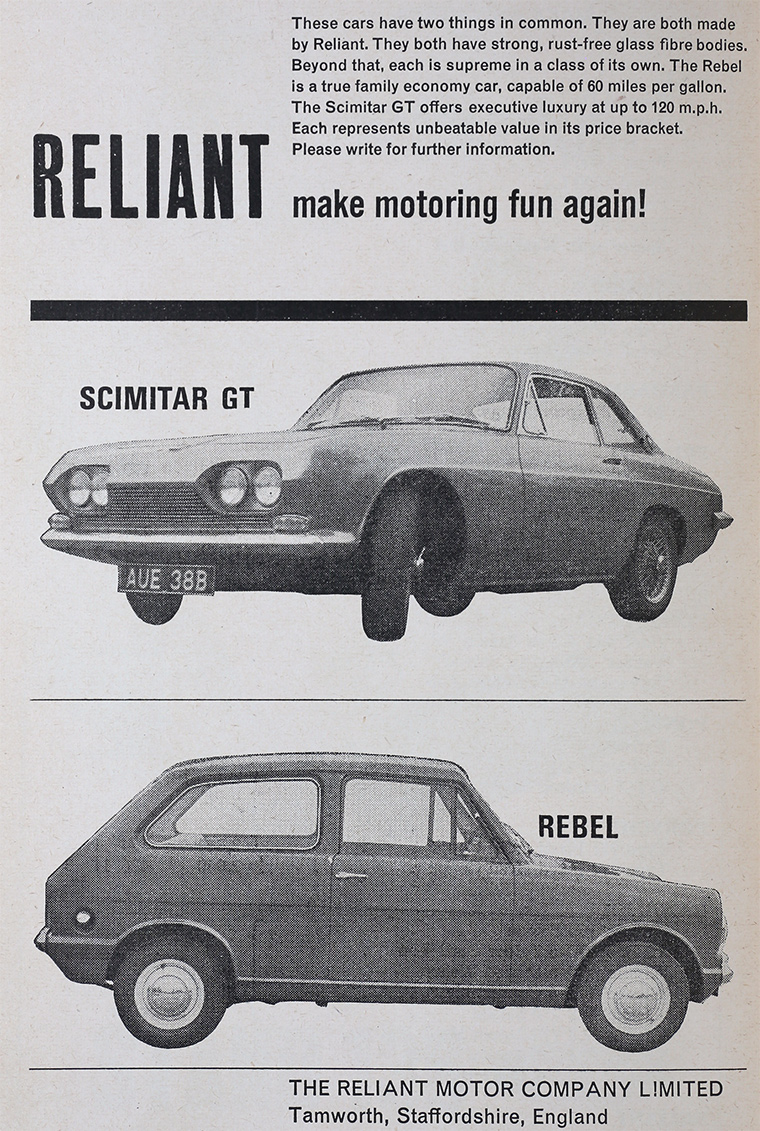 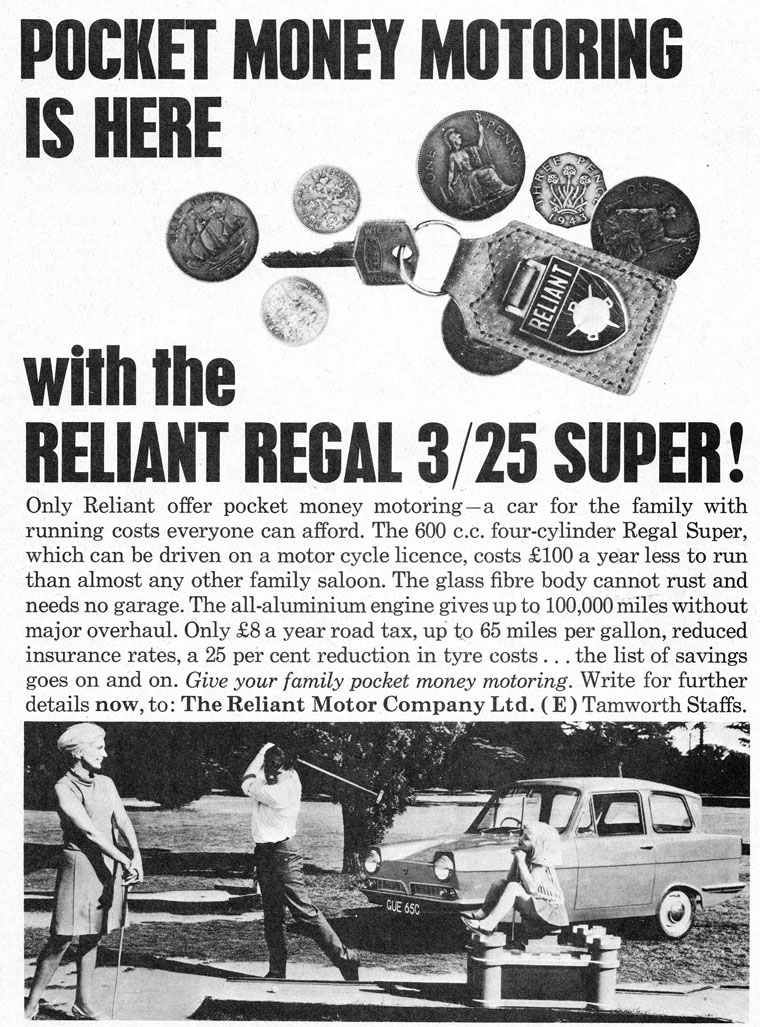 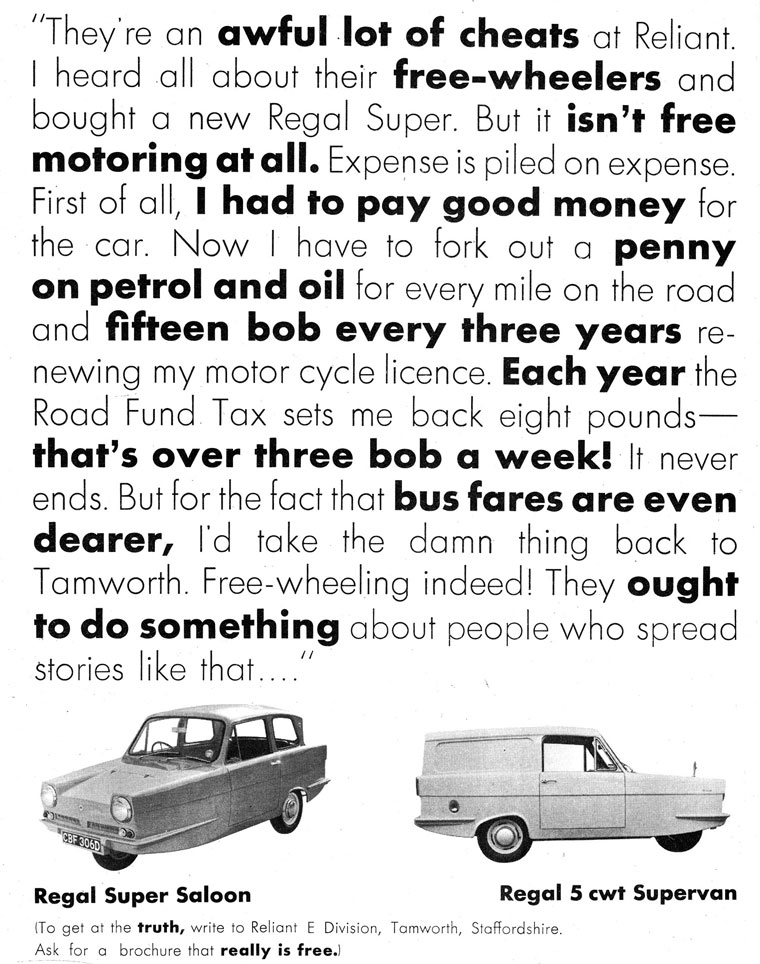 The Reliant Engineering Company of Tamworth

1935 Reliant was founded by T. L. Williams to take over making the Raleigh 3-wheeler delivery van which he had designed in 1933 and Raleigh no longer wished to make. It was powered by a 750 cc V twin engine to the rear wheels through a 3-speed gearbox and shaft drive.

1936 Produced a three-wheel vehicle designed by T. L. Williams. This was a 7cwt model with single-cylinder engine.

In 1939 the engine was replaced by Reliant's version of the straight four cylinder 747cc Austin 7 side-valve engine.

In 1952 a four seat car version was launched.

In 1956 the bodywork was changed to glass fibre.

1971 After absorbing Bond Cars, which had also been a maker of three-wheeler cars – though in their case with more stable rear engines – Reliant used the Bond name for the iconic 1970s Bond Bug, a sporty three wheeler designed by the Ogle designer Tom Karen.

Reliant also built a four-wheeled version of the Reliant Robin called the Reliant Kitten; the forerunner to this was the Reliant Rebel and between 1983 and 1990 a utility / pickup vehicle called the Reliant Fox (this car was based on an original MEBEA development on Reliant mechanicals and was jointly developed for production by MEBEA and Reliant; it had originally been built in Greece by this Greek company between 1979 and 1983). They also made a small 3 wheeled commercial vehicle called the Reliant TW9, later sold by other companies as the Ant, which was basically a Chassis / Cab onto which a custom rear body was fitted and used by public utility companies.

Most of these quirky and distinctly British small cars used Europe's first mass-produced lightweight overhead valve aluminium alloy engine, initially 598 cc but enlarged through the years to a final 848 cc in 1975. (Early Reliant three-wheelers used an engine derived from the 747cc 1930s Austin Seven ). Reliant's own aluminium alloy engine is also used as the replacement for the Austin Seven engine by the 750 Motor Club in their Formula 750 motor sport.

Reliant has provided designs to several other manufacturers, including Autocars in Israel and Otosan in Turkey in the 1960s, and MEBEA in Greece and Sipani in India in the 1970s.

1989 Reliant acquired Metrocab and transferred the plant to Tamworth.

Reliant's expertise in the area of composite car body production was also exploited by the company in producing lightweight body shells for Ford RS200 Rally cars, and new Glass Fibre Bodied London Taxis, the Metrocab, the first to have full wheelchair provision, manufactured by a division of Kamkorp.

1990 Reliant Motor Group of Tamworth was put into receivership[2].

1991 Following the collapse of the Reliant Group, Metrocab was bought out of receivership by the vehicle coachbuilder Hooper (Coachbuilder).

1995 After Beans went into receivership, the receiver sold Reliant to a private engineering company at Tewkesbury; Reliant was making 800 vehicles/year; production would be concentrated on one site[4].

2001 production rights for the Reliant Robin were sold to a Sudbury-based film called B. and N. Plastics, but production ceased in 2002.

Reliant concentrated on importing "speciality" vehicles from European manufacturers, including Piaggio, Bultaco and Ligier. The firm also had plans to import the Indian San Storm sports car, but this plan never came to fruition.

2001 It moved to nearby Cannock. It ceased manufacturing cars shortly afterwards.