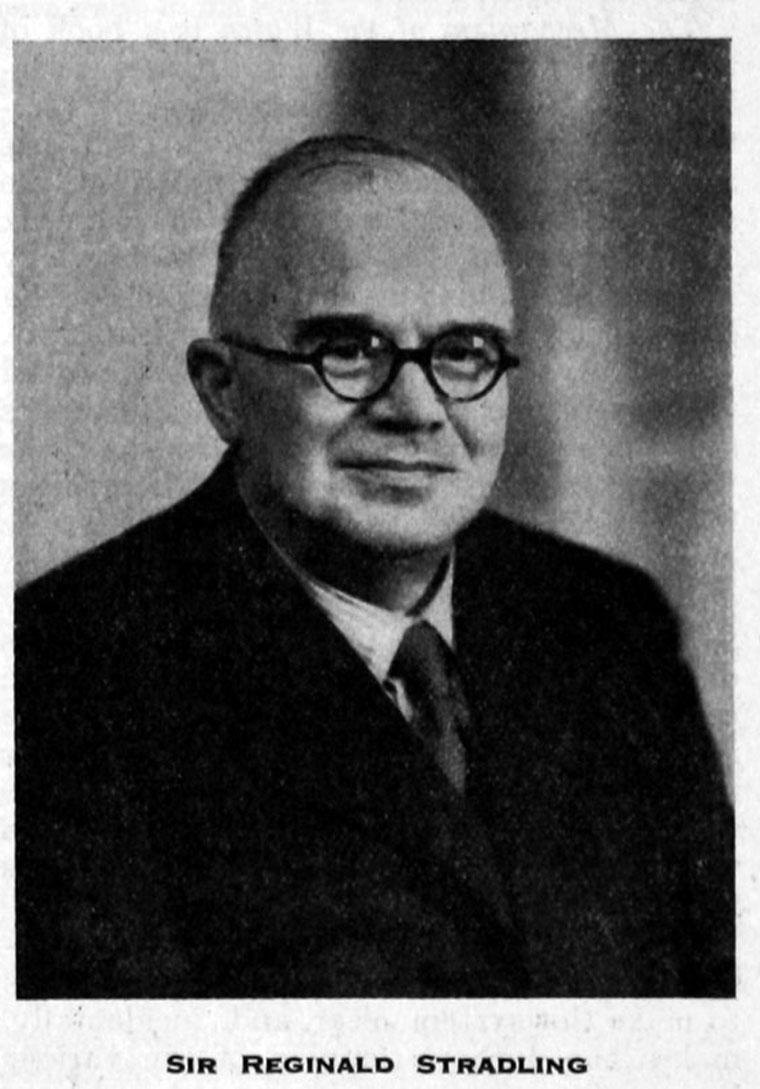 WE regret to have to record t he death of Sit Reginald Stradling, C.B., M.I.C.E., F.R.S., which occurred, suddenly, at Shrivenham, Wiltshire, on Saturday last January 26th.

Sir Reginald, who was in his sixty-first year, had been Dean of the Military College of Science, Shrivenham, since 1949.

Reginald Edward Stradling was born at Bristol on May 12, 1891, and received his general education at the Merchant Venturers' School and Bristol Grammar School. He studied engineering at Bristol University - which later conferred upon him the degree of D.Sc. - and then, between 1912 and 1914, received practical training under Mr. A. P. I. Cotterell, M.I.C.E.

Subsequently, Reginald Stradling extended his practical experience with Messrs. Bradshaw, Gass and Hope, civil engineers and architects, of Bolton, with the Midland Counties Reinforced Concrete Company, and with Mr. Harry Jackson, M.I.C.E., who was engaged on various water supply and sewage disposal schemes.

In the first world war he held a commission in the Royal Engineers, was awarded the Military Cross, and was twice mentioned in dispatches.

In 1918 Sir Reginald went to the University of Birmingham as a lecturer in civil engineering, and during his four years in that appointment frequently assisted Professor F. C. Lea in private consulting work on structural problems.

He then became head of the Department of Civil Engineering, Architecture and Building at the Bradford Technical College, where he remained until 1924. In that year Sir Reginald was appointed Director of the Building Research Station set up by the Department of Scientific and Industr1al Research. During his fifteen years in that office the work of the station was considerably extended and many important experiments on building construction and road work were carried out under his direction.

When war broke out in 1939 Sir Reginald became chief adviser on research and experiments in the Ministry of Home Security, in which office he served until 1944, when the Ministry of Works appointed him chief scientific adviser. His many tasks in the years that followed included researches and experiments concerned with the Government's housing schemes.

For a time, at the end of the war, Sir Reginald also acted as an adviser in the civil defence section of the Home Office.

In 1949, on the death of Dr. C. H. Lander, Sir Reginald was appointed Dean of the Military College of Science. Sir Reginald's knighthood was conferred in 1945, he having previously received the honour of C.B. in 1934.

He became a member of the Institution of Civil Engineers in 1917 and a Fellow of the Royal Society in 1943.

In 1942 Sir Reginald was awarded, by the Council of the Institution of Civil Engineers, the James Alfred Ewing Medal "for specially meritorious contributions to the science of engineering in the field of research." Sir Reginald was also an Honorary Associate of the Royal Institute of British Architects and an associate member of the American Society of Civil Engineers.

In 1947 he was the recipient of the America Medal for Merit, an award which was made in recognition of experimental work concerned with the explosive effects of the atomic bomb.