c.1794 Button shank machine in the Thinktank. The shanks are the small looped pieces of brass wire visible in the box 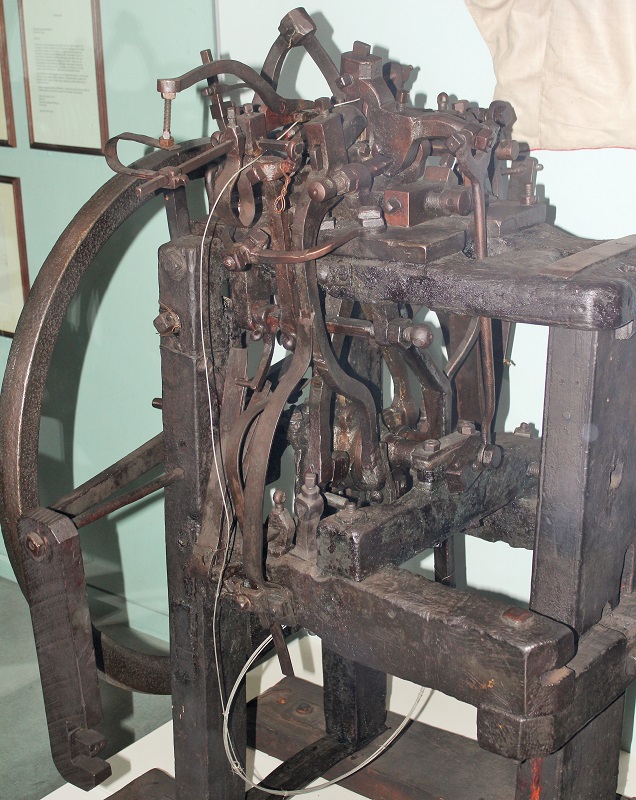 c.1794 Button shank machine in the London Science Museum. '...of so complicated a nature ... he did not obtain a patent for it...'

Ralph Heaton (1755-1832) of Birmingham was an engineer, inventor and businessman.

His business was located in Slaney Street, where he had a considerable reputation as a manufacturer of rose-engines, and of various tools used in the Birmingham trades. He invented a machine for drilling four holes at once in buttons, and in 1790 he developed a press for cutting out and punching the holes in button cards at one operation. Richard Prosser[1] described the button shank machine as “of great interest as being probably the first example of a machine in which the material is subjected to a series of independent operations succeeding each other at regulated intervals of time.”

'Mr. R. Heaton invented, and brought to the present state of perfection, machinery to make button shanks. The machine forms at once the shank ready for the button. There are three places in Birmingham where they are made - the principal one is Heaton, Brothers, of Shadwell Street, sons of the inventor, where from thirty to forty tons are made annually. The largest are eight gross to the pound; the smallest forty gross to the pound. About eighty thousand can be made per hour.'[3]

'RALPH HEATON. The person who invented and constructed the ovens, during the siege of Gibraltar, for heating the shells, resides at present in Birmingham; his name is Ralph Heaton. He has also invented a most curious machine for making of button shanks, of so complicated a nature that although he did not obtain a patent for it, and admits every mechanic readily to see it, there is not one who could ever construct another. He sold one of them to Tomlinson, the great manufacturer, for two thousand pounds; and such is the quickness with which it performs its operations, and the ease with which it is conducted, that although the said Tomlinson manufactures a considerable quantity of buttons, he is amply supplied with shanks by the numerous nobility and gentlemen who visit his manufactory, most of whom spend a few minutes in working this ingenious piece of machinery.
'The said Ralph Heaton is also author of many other ingenious inventions, and has made many improvements on the structure of steam-engines, and has by his inventive faculty accumulated a considerable fortune.'[4]

By 1828 several of his sons had formed Heaton Brothers

1832 Death notice:'At Birmingham, lately, in the 78th year of his age, Ralph Heaton, nearly forty years a well known and successful engineer of that town, the inventor of the button shank engine, and various other machines.'[6]