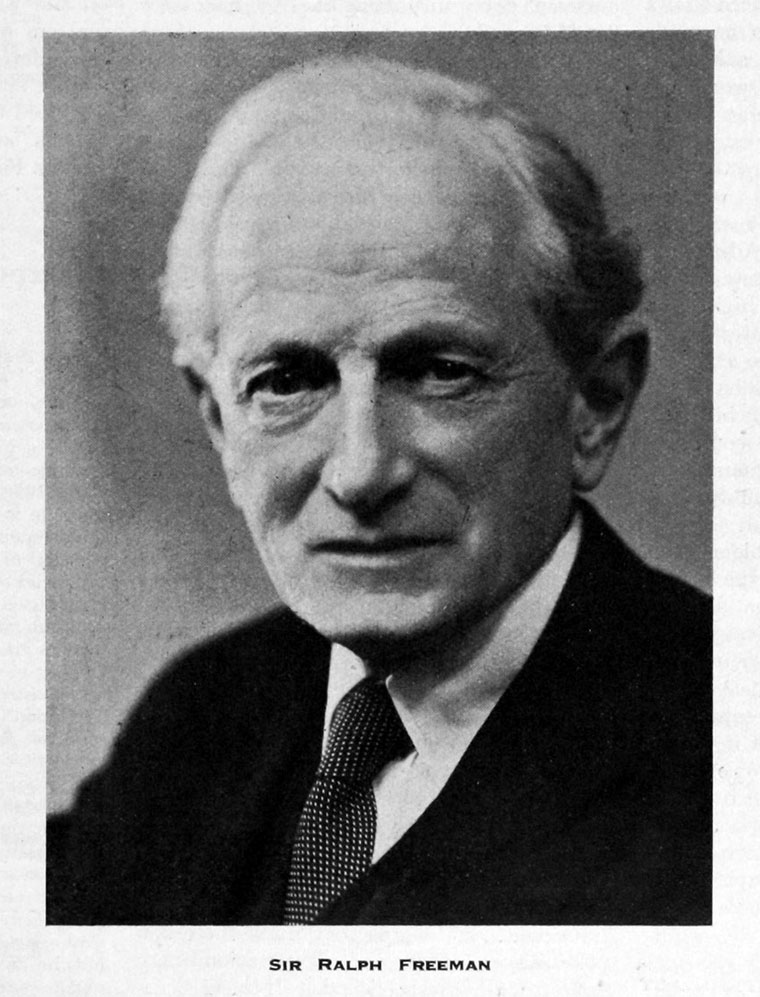 Sir Ralph Freeman (1880-1950) was an English structural engineer, responsible for the design of several of the world's most impressive bridges.

1901 Joined Douglas Fox and Partners, a firm of consulting engineers specialising in the design of steel bridges, where he was concerned with the estimation, specification, calculation, designs of bridgework and erection plant[1]:

Involved in parliamentary work regarding some of London's underground railways, and with railways in the environs of Manchester and Cork.

1903 assisted G. A. Hobson in the design of the braced-steel arch bridge over the Zambezi at the Victoria Falls, completed in 1905.

1906 Appointed consulting engineer to the Beit Trust for whom he designed and supervised the construction of the Alfred Beit Bridge, and later the Otto Beit and Birchenough bridges, in Northern and Southern Rhodesia. He was awarded a Miller prize for his 1906 paper, "The design of a two-hinged spandrel-braced steel arch".

1907 He became an associate member of the Inst Civil Engineers

1912 became a partner in the firm; responsible for works as varied as a harbour at Beira in Mozambique and a ropeway 50 miles long in Colombia, and for reporting on railways in Illinois.

WWI supervised the construction of railways and other works at Nobel's Explosive Company's factory, the building and equipping of a cordite factory for the Admiralty, the Furness shipbuilding yard, and the Royal Naval Propellant factory.

1917 Transferred to full membership of the Inst Civil Engineers

1922 Retained by the Cleveland Bridge and Engineering Company to prepare designs for the Sydney Harbour Bridge but, on the death of the company's chairman the following year, its tendering for the project was abandoned.

1923 Dorman, Long and Co tendered for the bridge with designs prepared by Freeman and G. C. Imbault, the company's chief engineer

Freeman was appointed consulting engineer to Dormans for the bridge. Dorman Long established a department under Freeman in London to produce all the detailed drawings and calculations needed to construct and erect the bridge. After eight years' work it was completed in 1932.

Sir Ralph is best remembered for his design work on the Victoria Falls Bridge (1905) and the Sydney Harbour Bridge (1932). He also designed the lesser known Birchenough Bridge (1935), which is a smaller replica of the Sydney bridge in the Chipinge area of Zimbabwe.

1938 the firm changed its name to Freeman, Fox and Partners

Freeman remained in active control until his death.

"...Sir Ralph was born on November 27, 1880, and was educated at Haberdashers' Boys' School, Hampstead, and at the Central Technical College (now the City and Guilds College), South Kensington, where he studied from 1897 to 1900..." [ more]