Grace's Guide is the leading source of historical information on industry and manufacturing in Britain. This web publication contains 146,991 pages of information and 232,842 images on early companies, their products and the people who designed and built them. 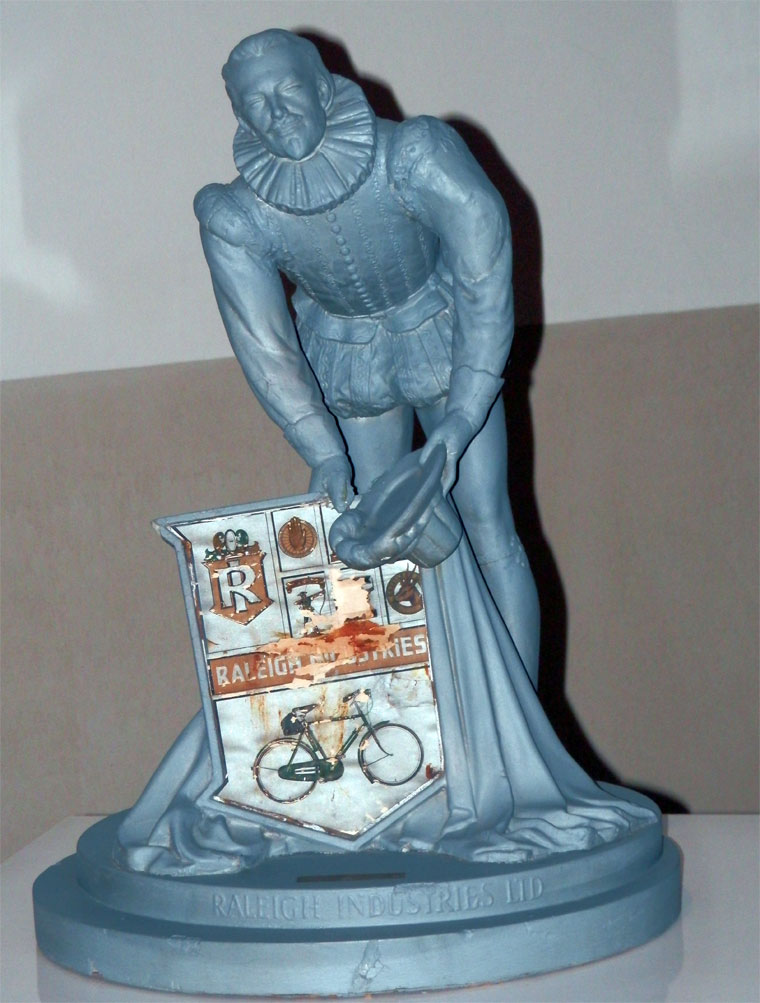 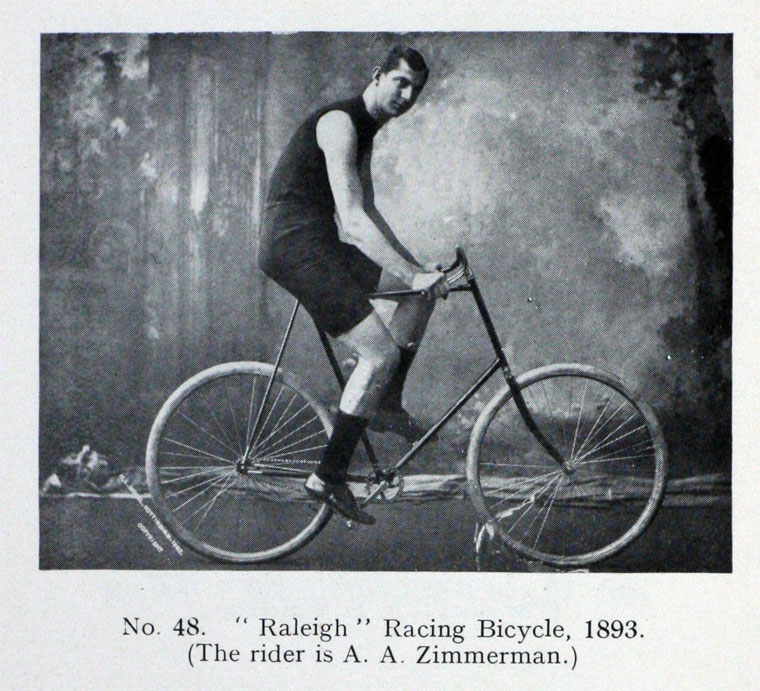 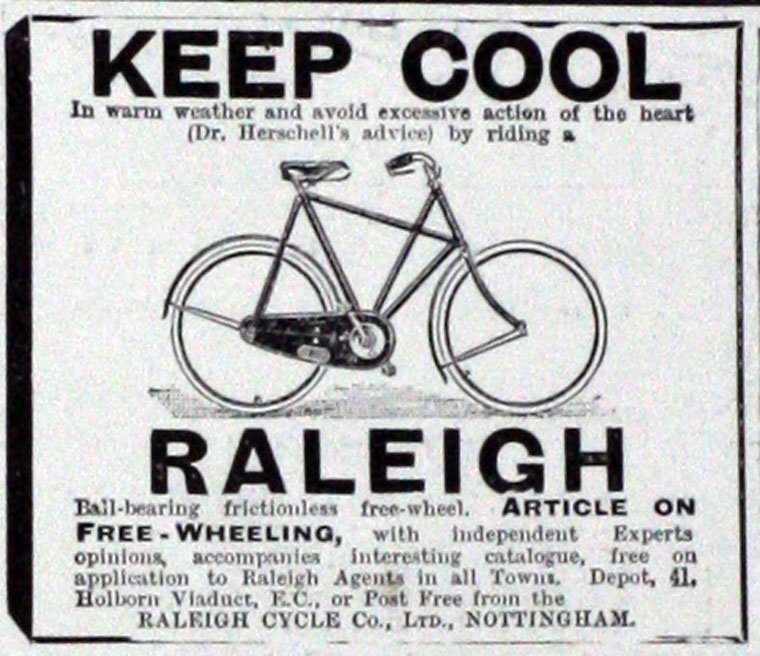 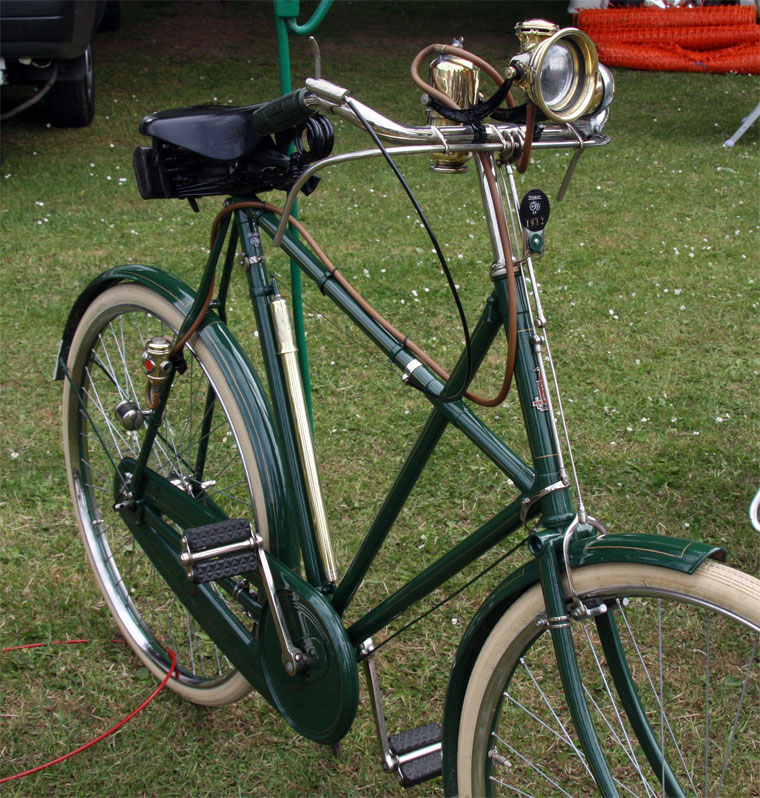 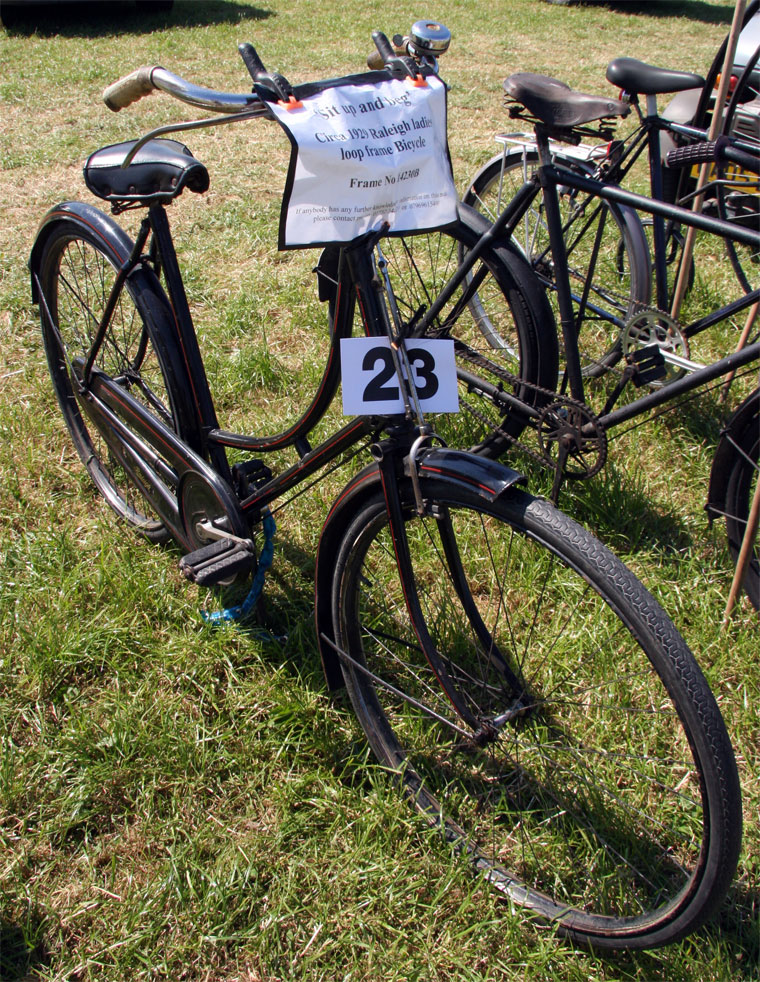 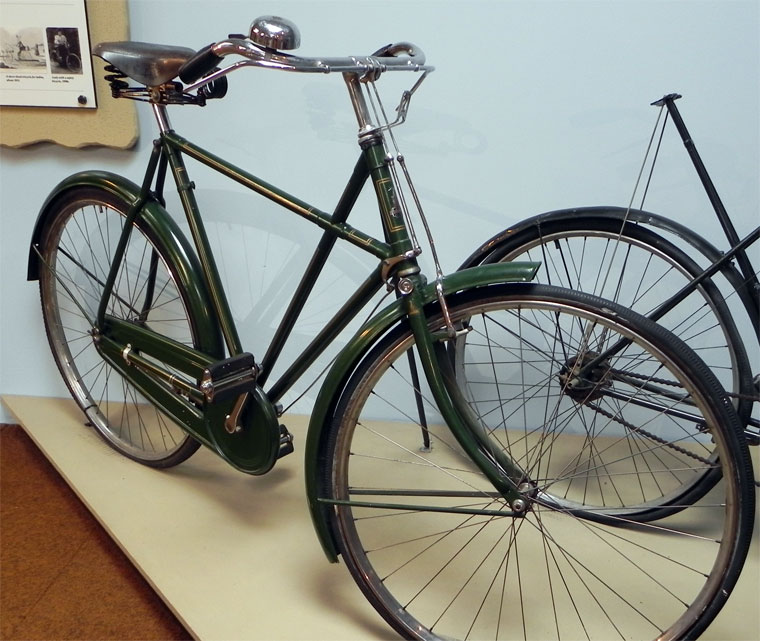 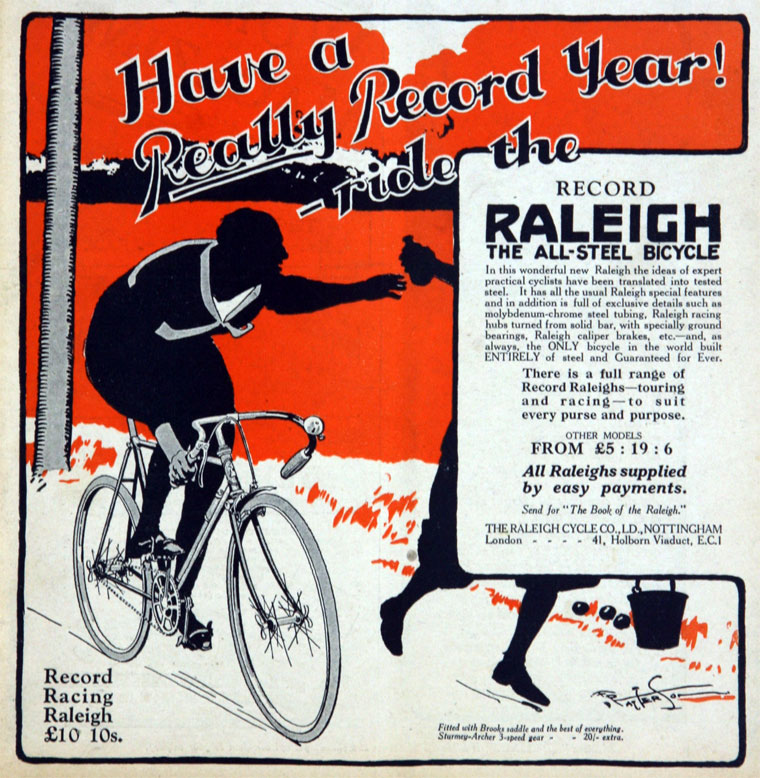 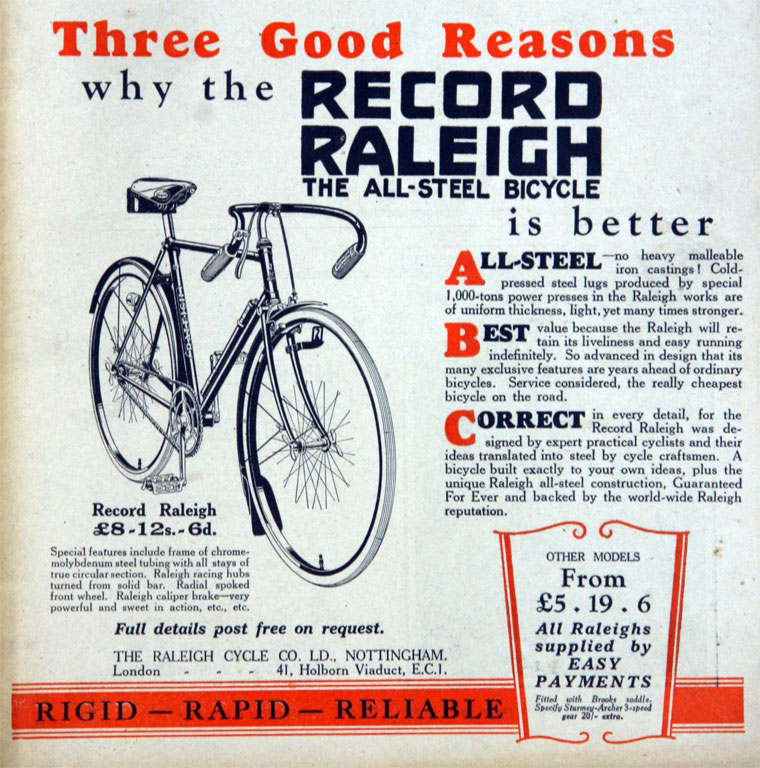 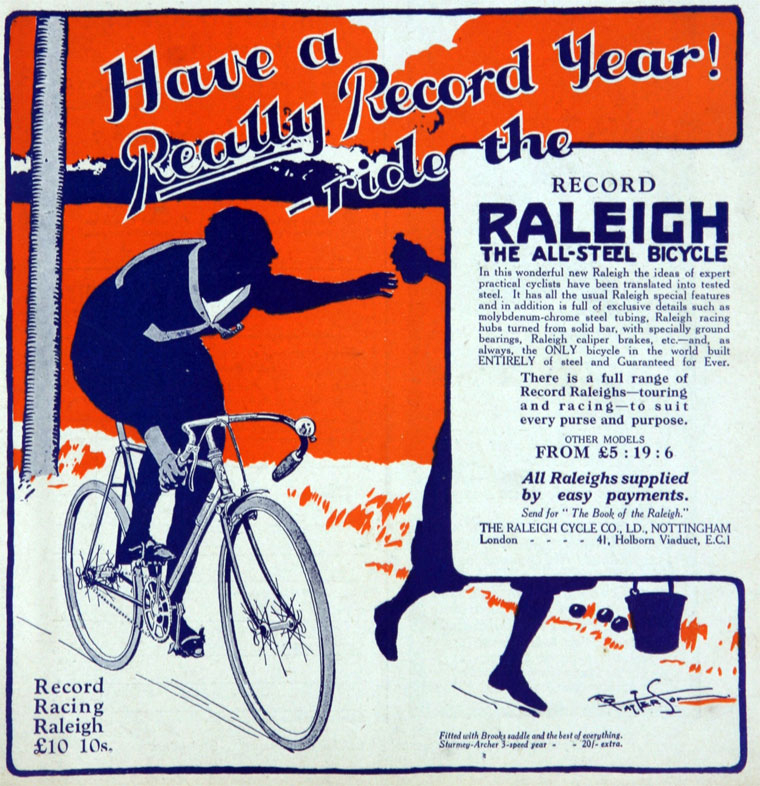 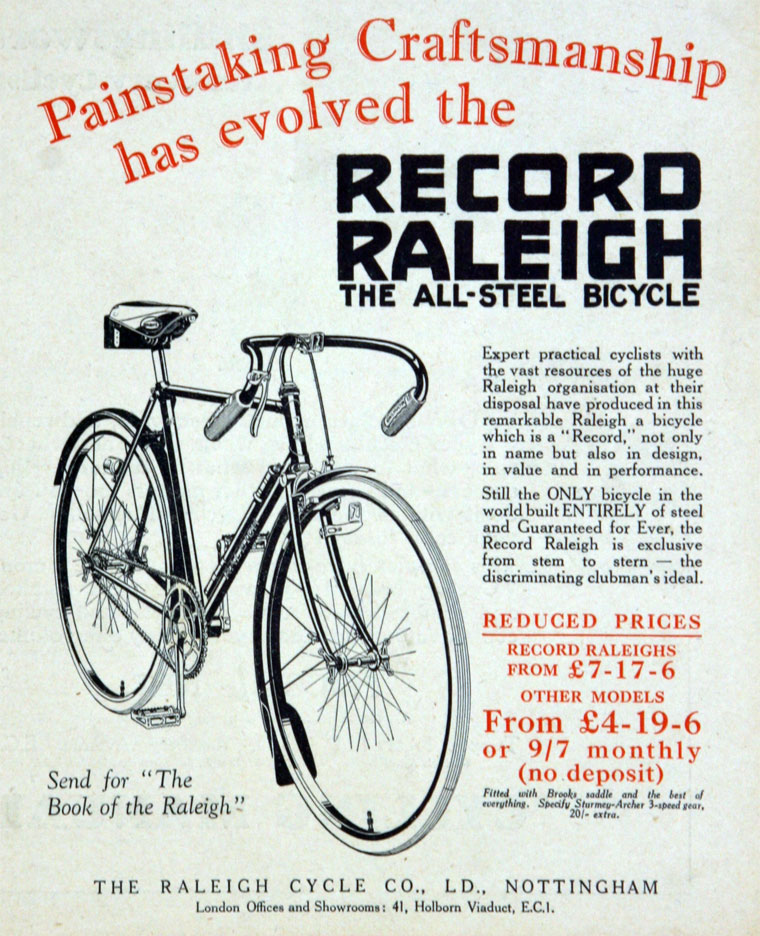 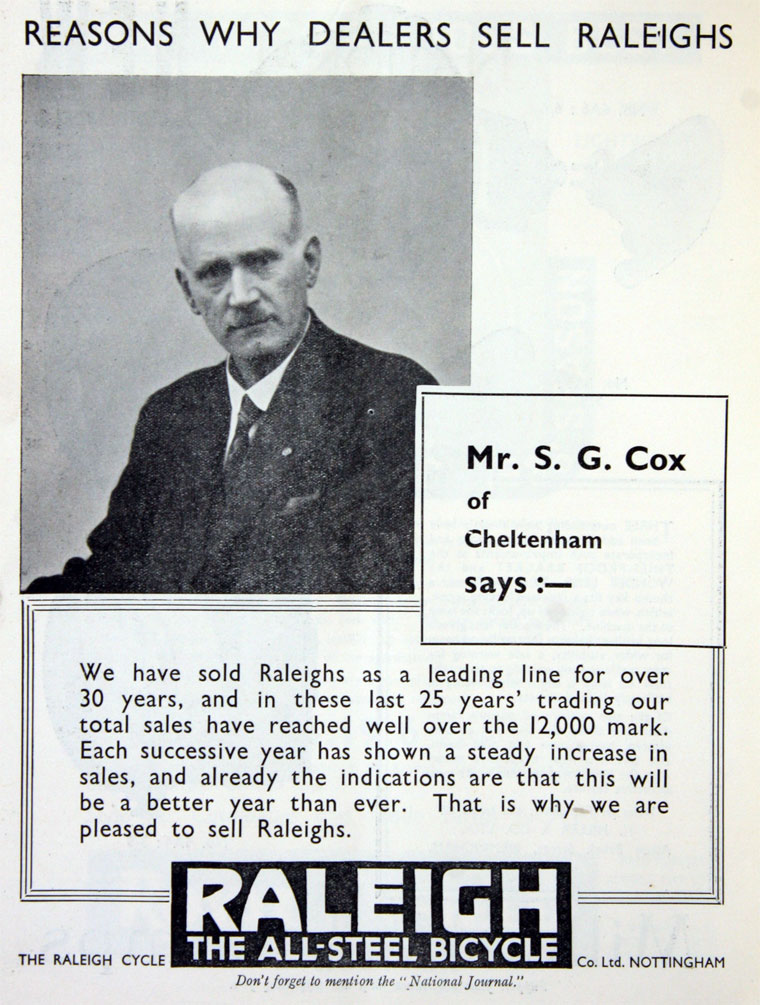 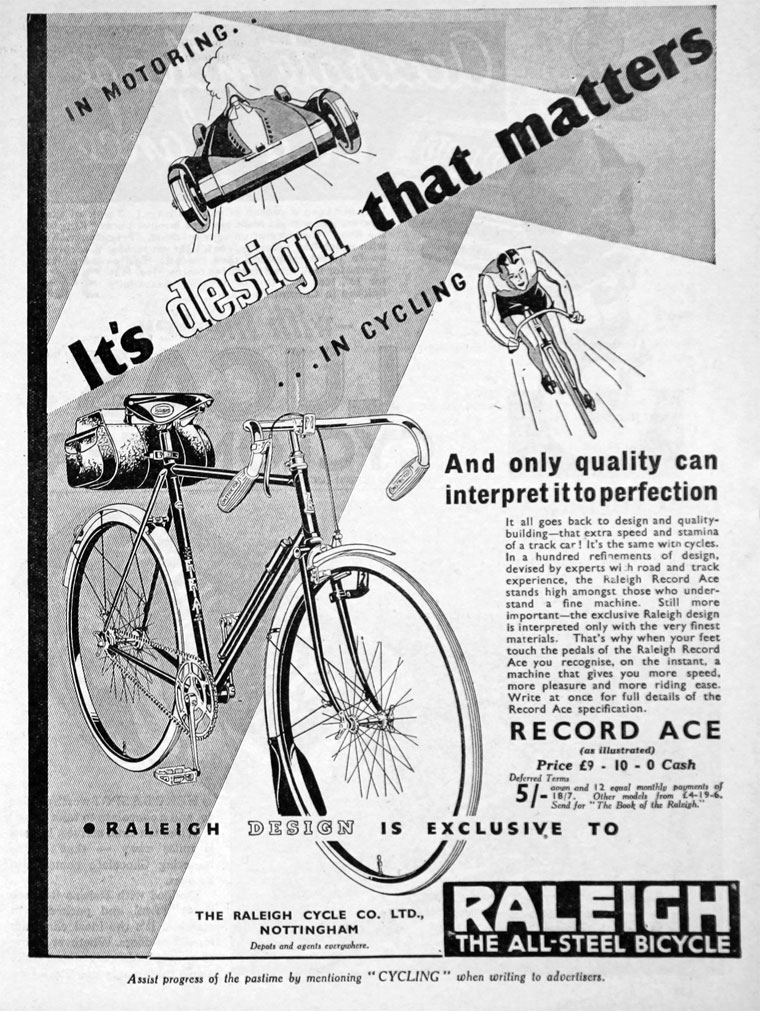 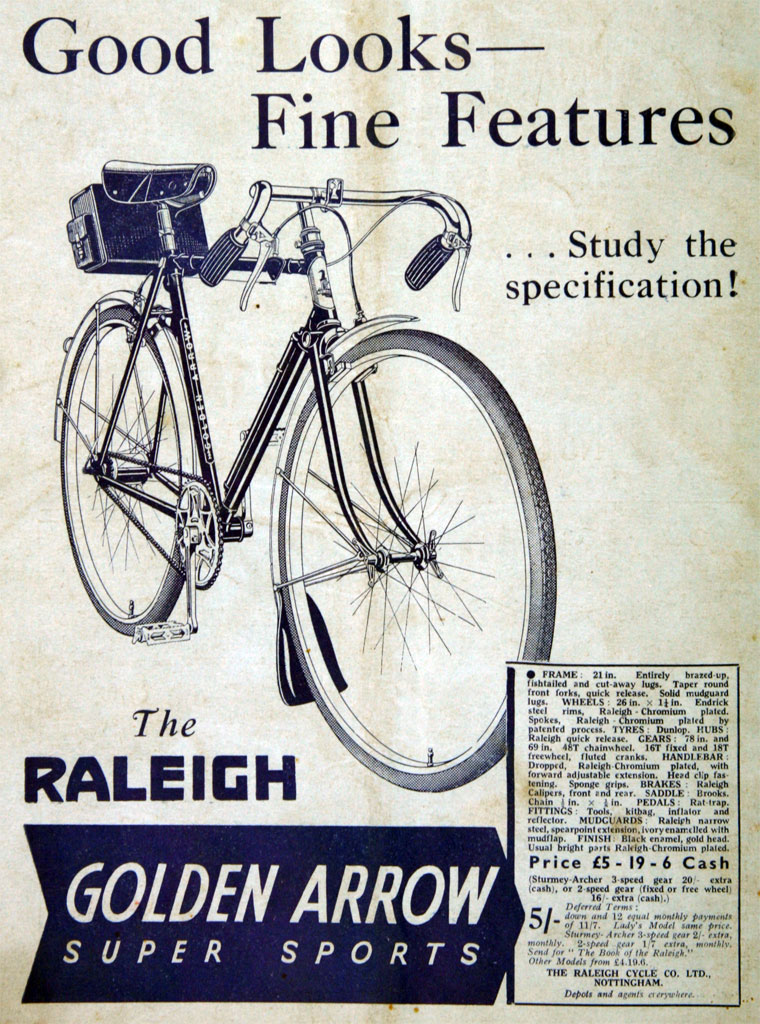 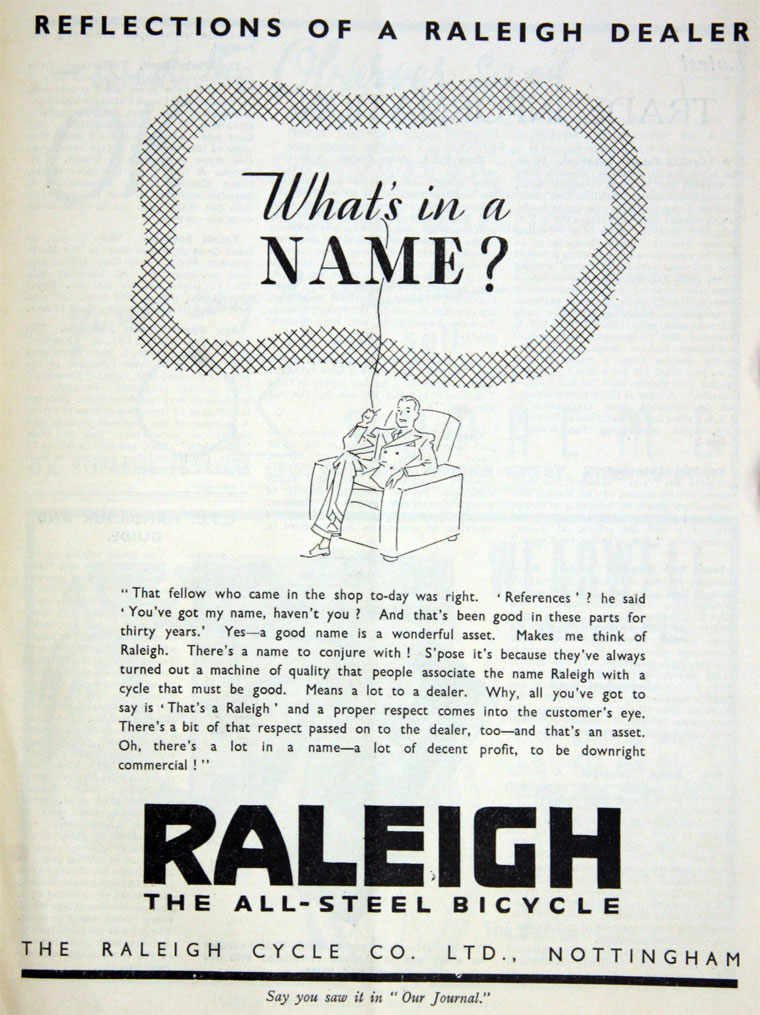 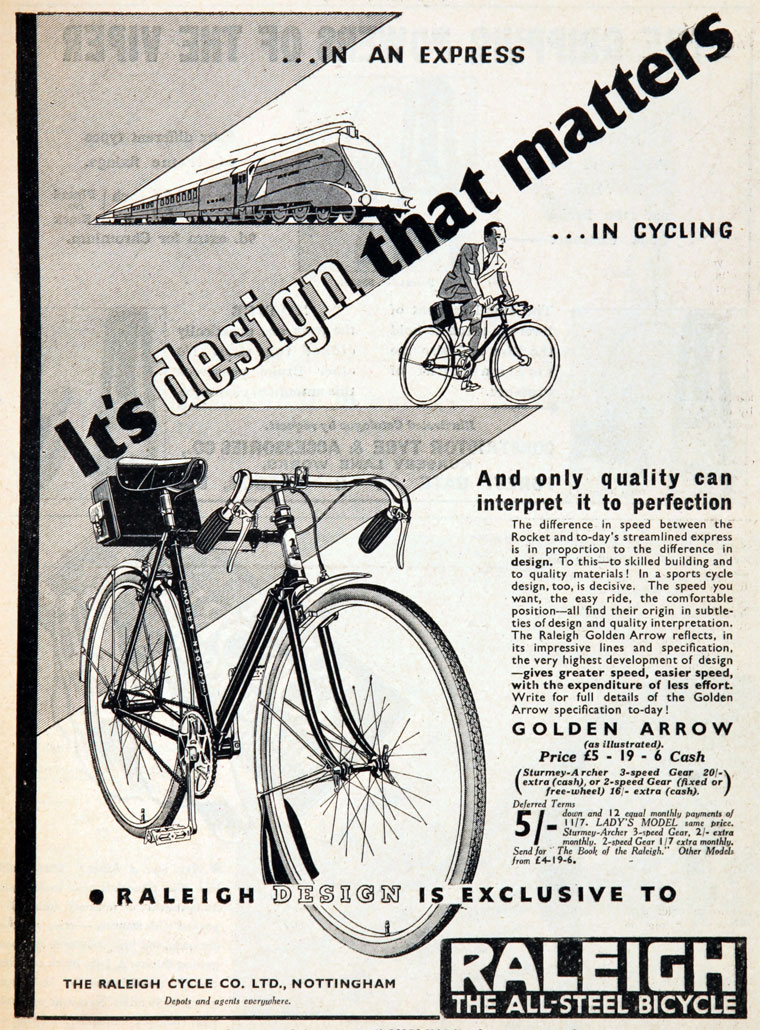 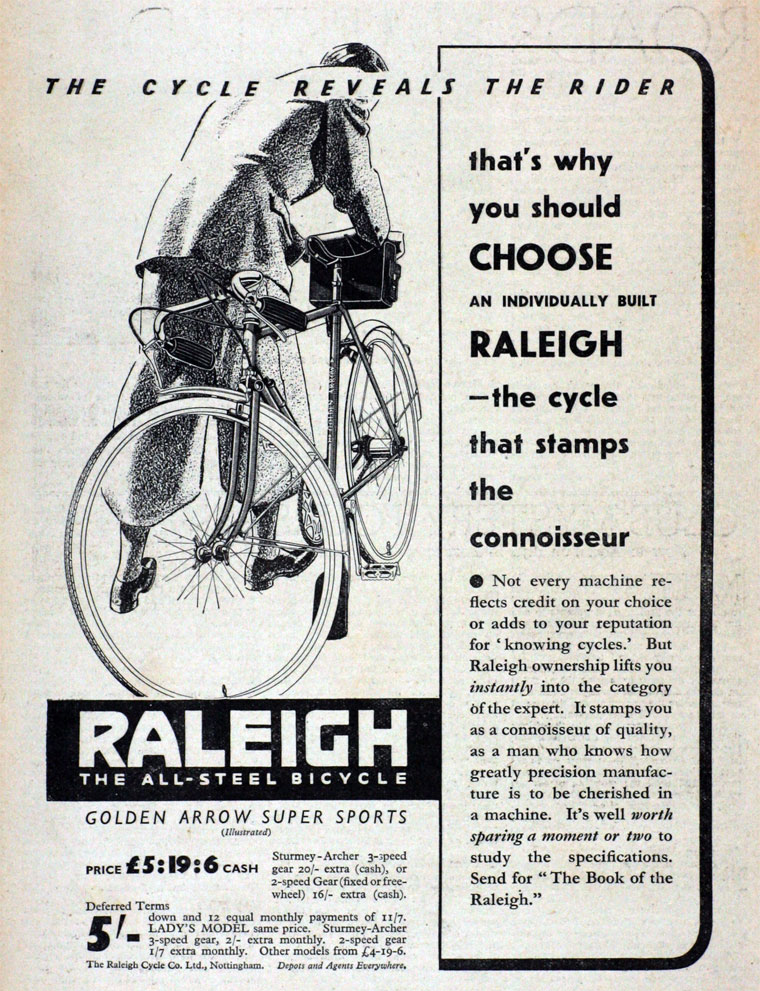 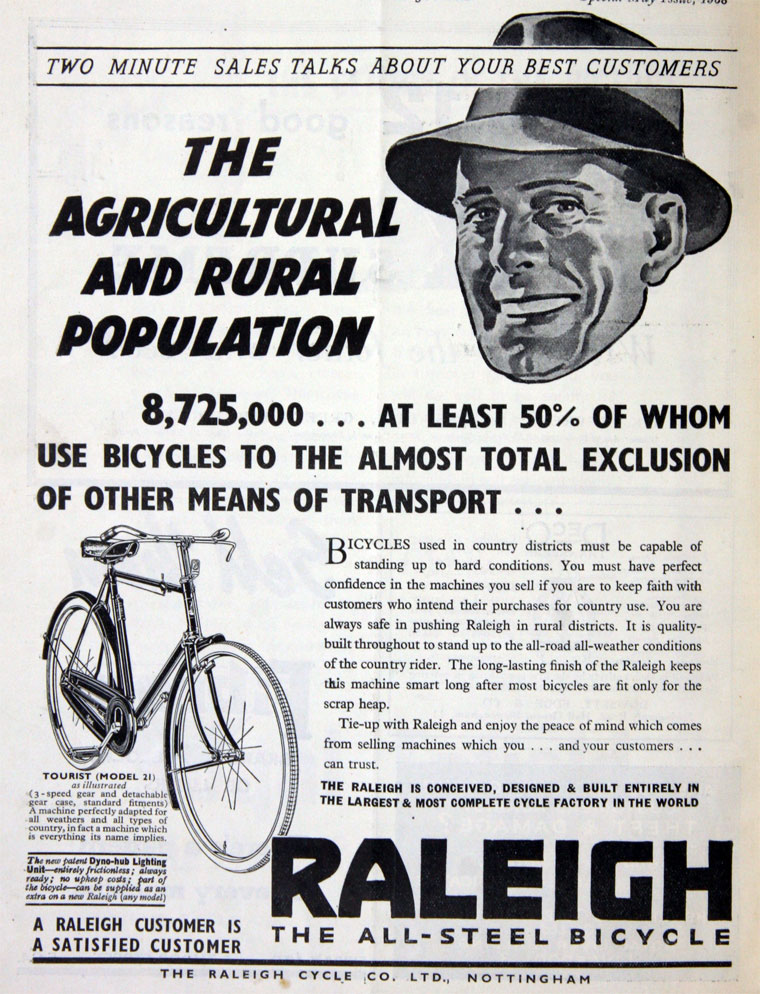 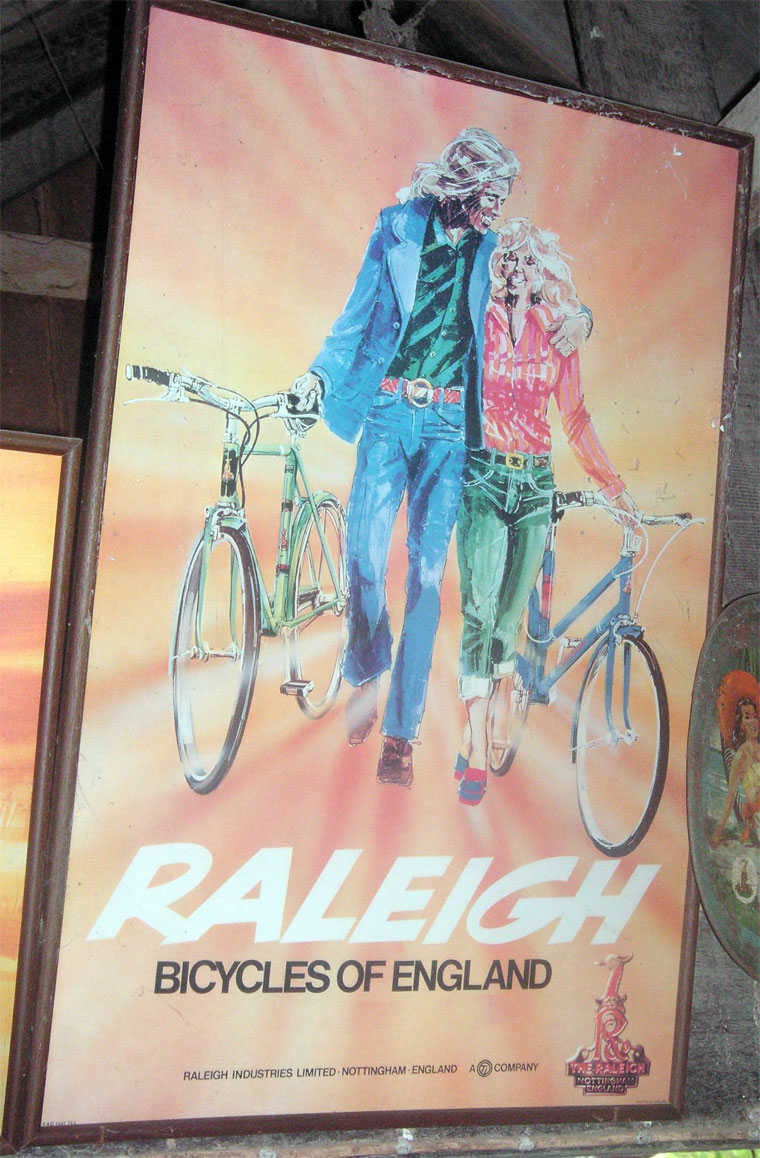 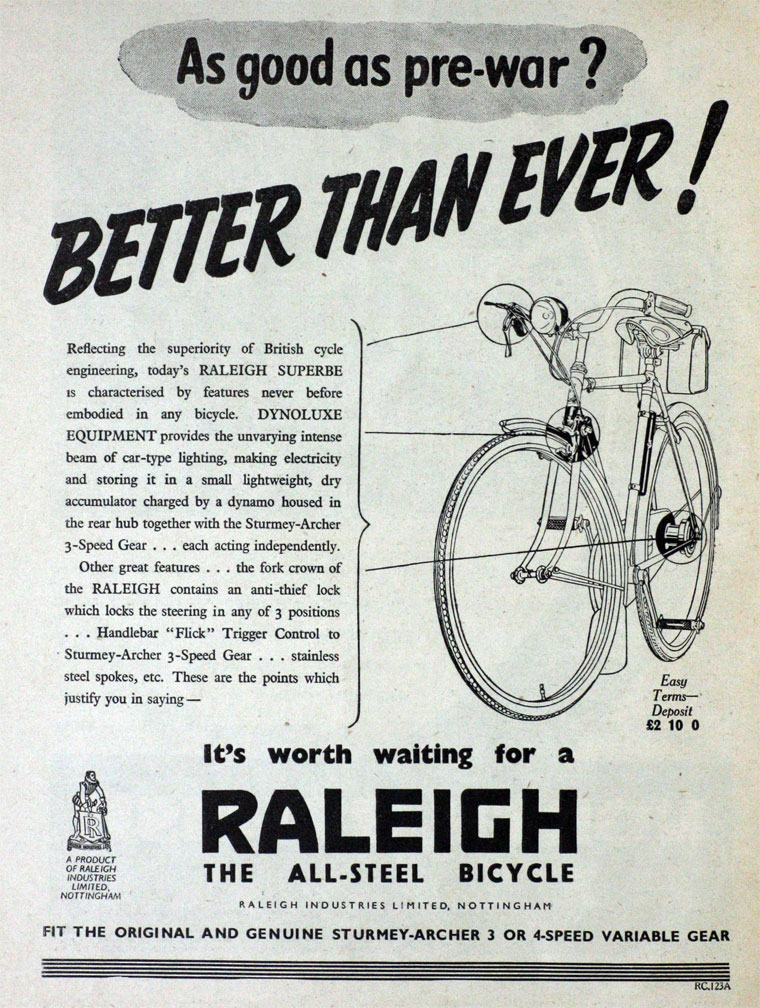 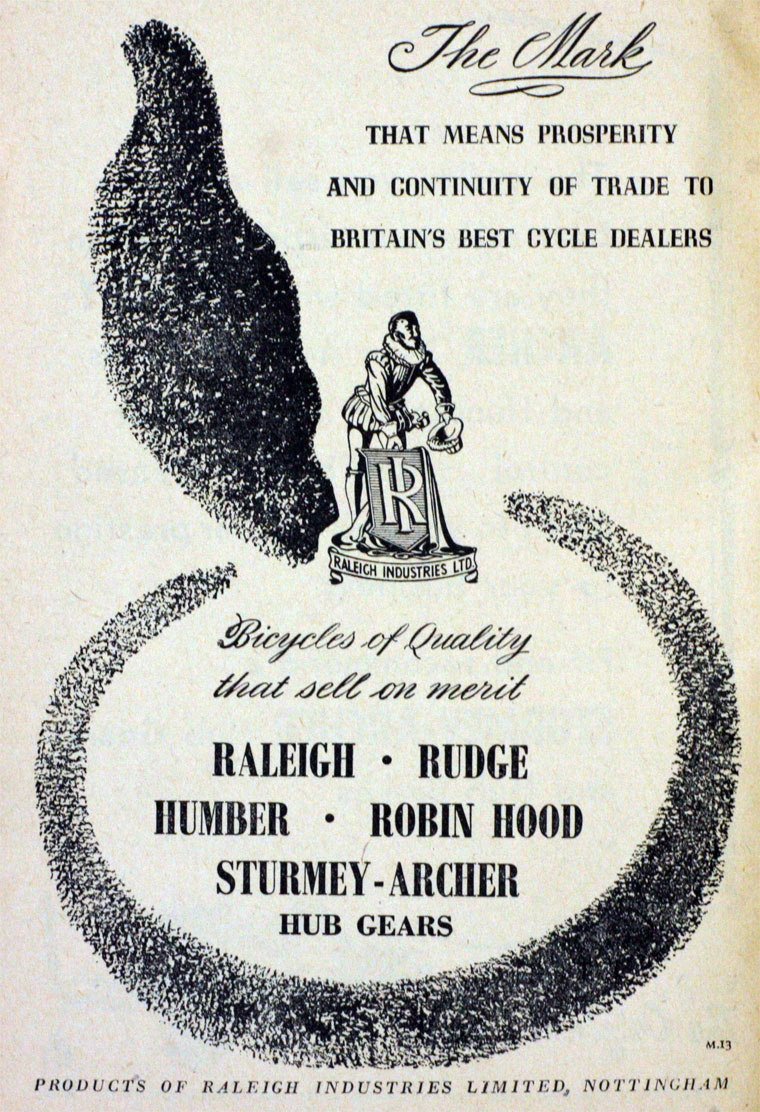 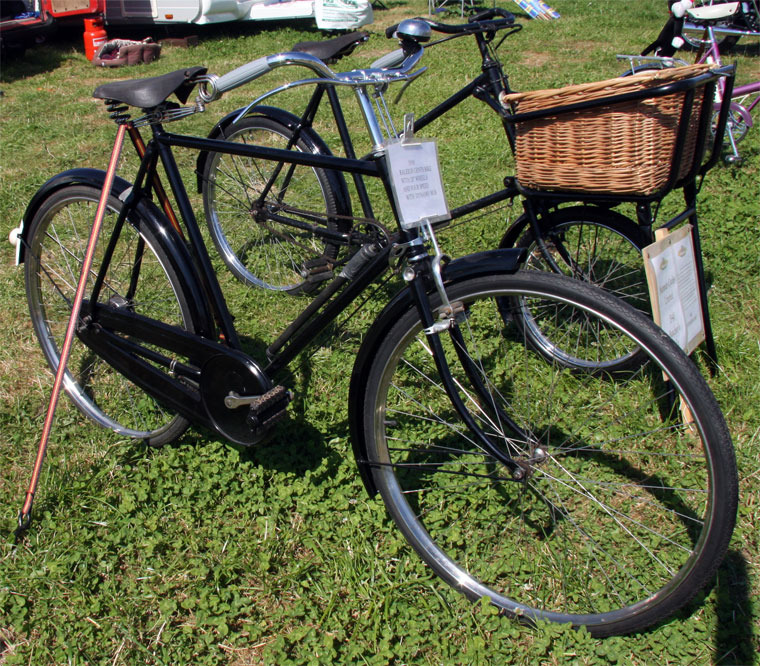 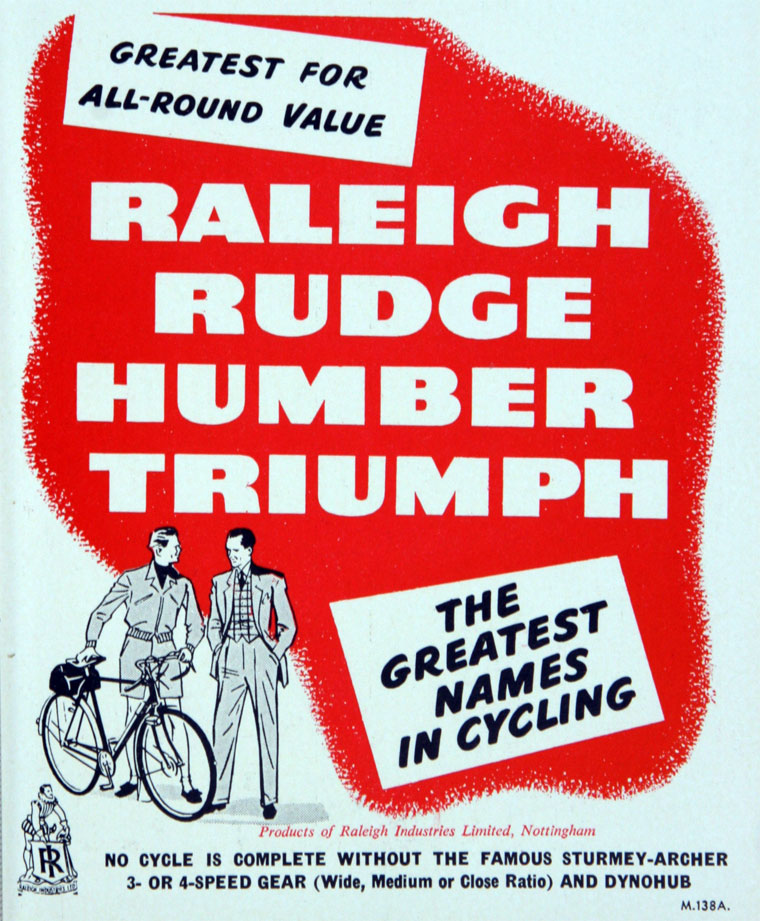 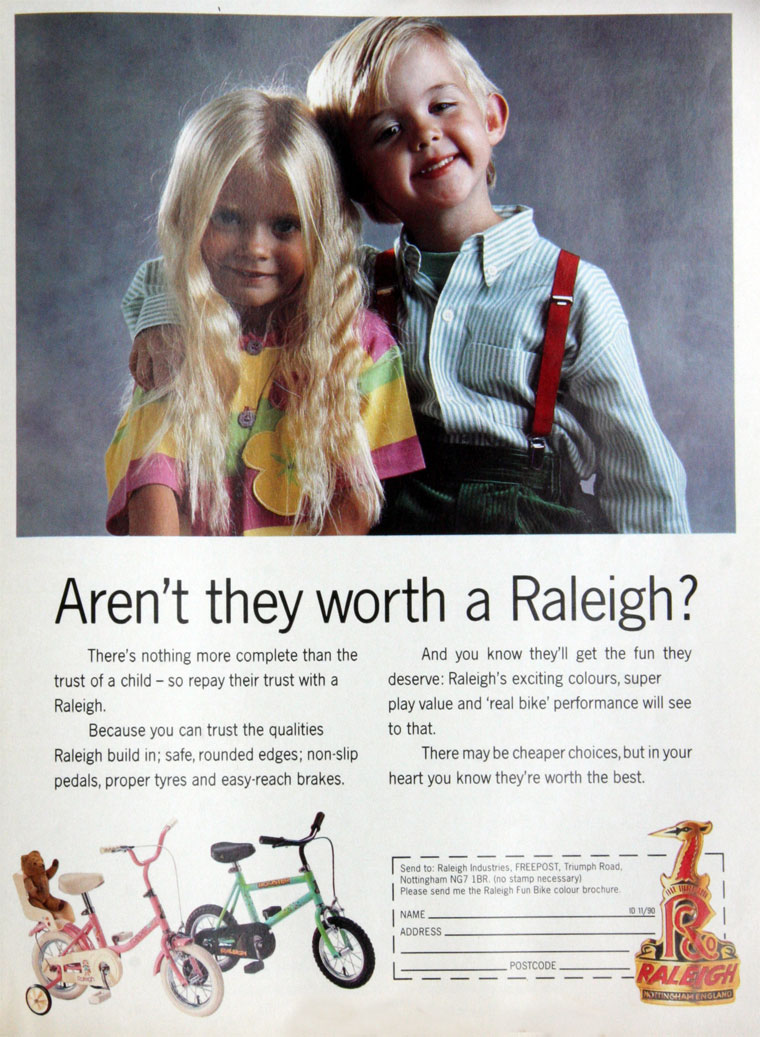 Note: This is a sub-section of Raleigh Cycle Co.

1951 Over a million cycles produced.

1970s Raleigh produced the iconic Raleigh Chopper bicycle, the "must-have" bike for children at the time. It was a massive success, and led to a significant revival in the company's fortunes.

Raleigh produced millions of bicycles in its Nottingham factory and were, at one time, the largest bicycle manufacturer in the world.

Illustration depicts A. A. Zimmerman, New York Athletic Club, on an identical machine, except that Zimmerman used fixed Dunlop tyres (stuck to the rims), and his bicycle had the special Raleigh system of spoking in the rear wheel. This consisted of a complete set of 'direct' (radial) spokes, with the addition of eight tangent spokes: each of the latter was made in two pieces, joined half-way between rim and hub by a right and left threaded sleeve, so that the spoke could be tensioned. The direct spokes were tensioned in the then usual way, by screwing, them into the hub-flange; the end of each spoke, at the rim, carried a head. The front wheel was spoked in the usual 'direct' method.

On the machine illustrated, Zimmerman won the British National Championships at 1, 5, and 50 miles in 1892, falling in the 25 miles race. In all these events Zimmerman (who was an extremely fast pedaller) used the unusually low gear of 64.

During the 1892 season Zimmerman started in 100 races, winning 75 first prizes, 10 seconds, and 5 thirds: he beat records on 17 occasions. It is generally conceded that Zimmerman was the fastest sprinter ever seen on the cycle track. He raced as an amateur up to the end of 1893, and made his first appearance as a professional in July, 1894, when, in Paris, he beat A. C. Edwards in a series of matches. At the first world's championship meeting, in Chicago in 1893, Zimmerman won the 1 mile and 10 kilometres titles.

In June, 1893, he was offered a 'conditional' license by the National Cyclists Union, but refused it, and returned to America without racing in this country. It is amusing to recall that — in the days when 'maker’s amateurism' was rampant — an amateur license was sometimes granted to a crack rider on condition that he rode a make of bicycle other than that in which he was suspected of having a financial interest. "Zim" was born at Camden, New Jersey, U.S.A., in 1869: he is still alive, and a letter from him is attached to the American 'Star' bicycle in the Bartleet Collection.

The great commercial and engineering undertaking now known as the Raleigh Cycle Co. Ltd., has developed from a little business founded by three clever mechanics, Messrs. Woodhead, Angois, and Ellis, in Russell Street, Nottingham, in 1887. They exhibited their Raleigh bicycles at the Stanley Show at the Royal Aquarium, London, 28th January to 4th February, 1888, and the machines attracted immediate attention on account of the many novel features which were incorporated in their design. Even in those early days the Raleigh boasted a device "for the variation of gear" (vide advertisement of 1887 models) the outer portion of the chain-wheel being bolted to a 3-arm extension carried on the crank: by removing three bolts a larger or smaller chain-wheel could be fitted in a few minutes, thus raising or reducing the gear.

One of the firm's earliest customers was Mr. (later Sir) Frank Bowden, who, having retired from business owing to impaired health, had taken up cycling and found great benefit from the pastime. He acquired an interest in the concern which made the “Raleigh " bicycle, and later purchased the business, to the development of which he devoted his great commercial genius, with the result which is apparent to-day in the gigantic factory at Lenton, on the outskirts of Nottingham.

Sir Frank Bowden was so impressed with the health-giving aspects of cycling that he wrote a book — "Cycling for Health" — in which he related his personal experiences. His son, Sir Harold Bowden, Bart., who now controls the destinies of the Raleigh Co., was — in his younger days — a keen cyclist and oarsman: he also inherits his father's commercial ability. He was born at San Francisco, U.S.A., on 9th July, 1880.