Grace's Guide is the leading source of historical information on industry and manufacturing in Britain. This web publication contains 144,337 pages of information and 230,176 images on early companies, their products and the people who designed and built them.

January 1888. The Triple Expansion Engines of the SS Courier. 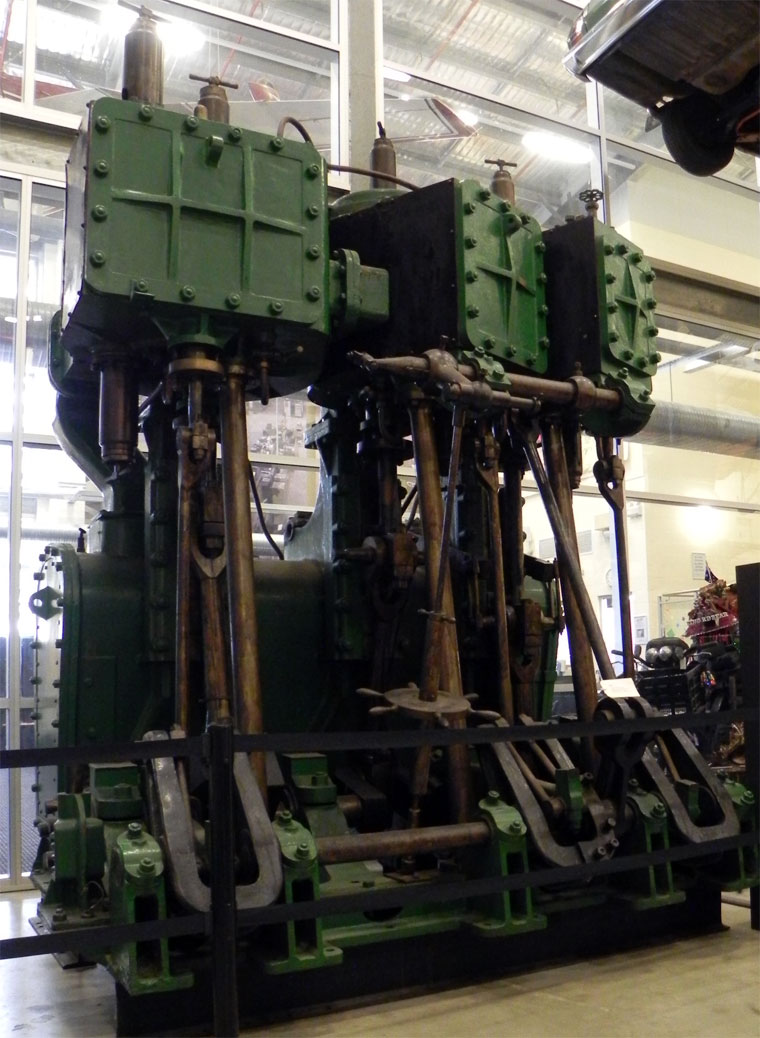 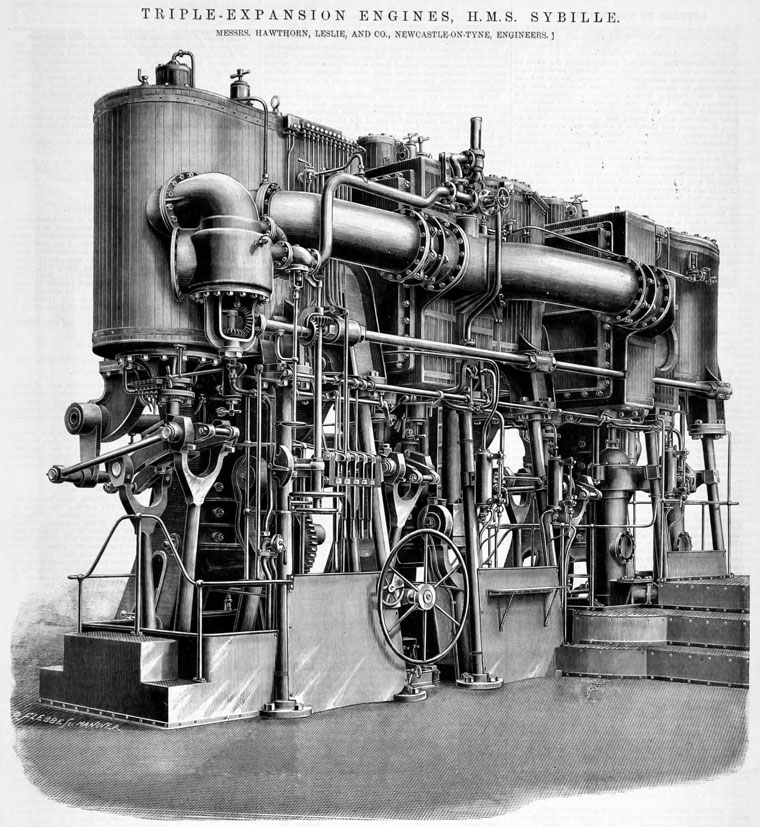 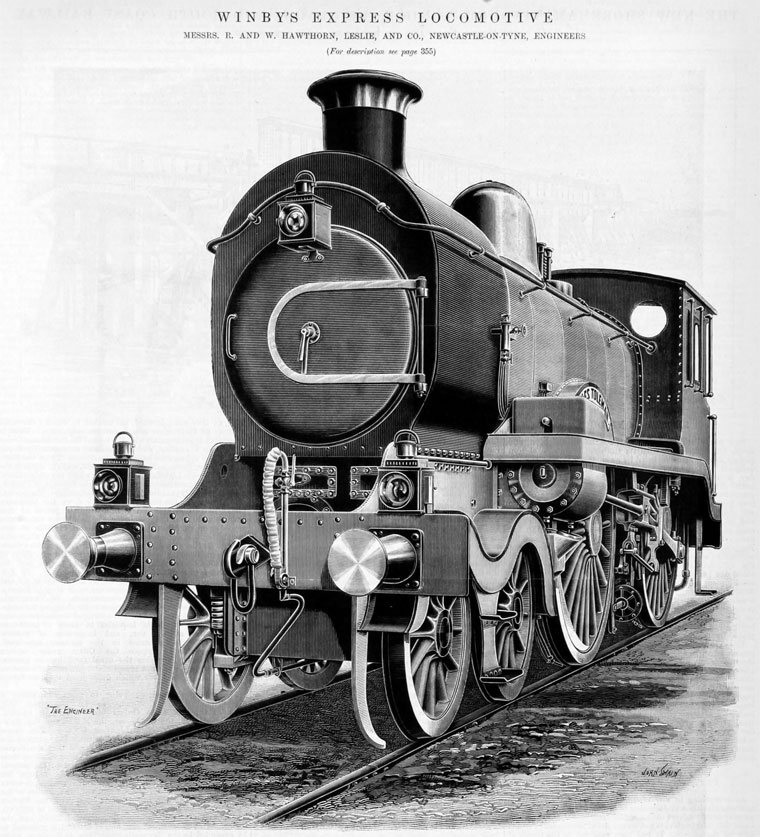 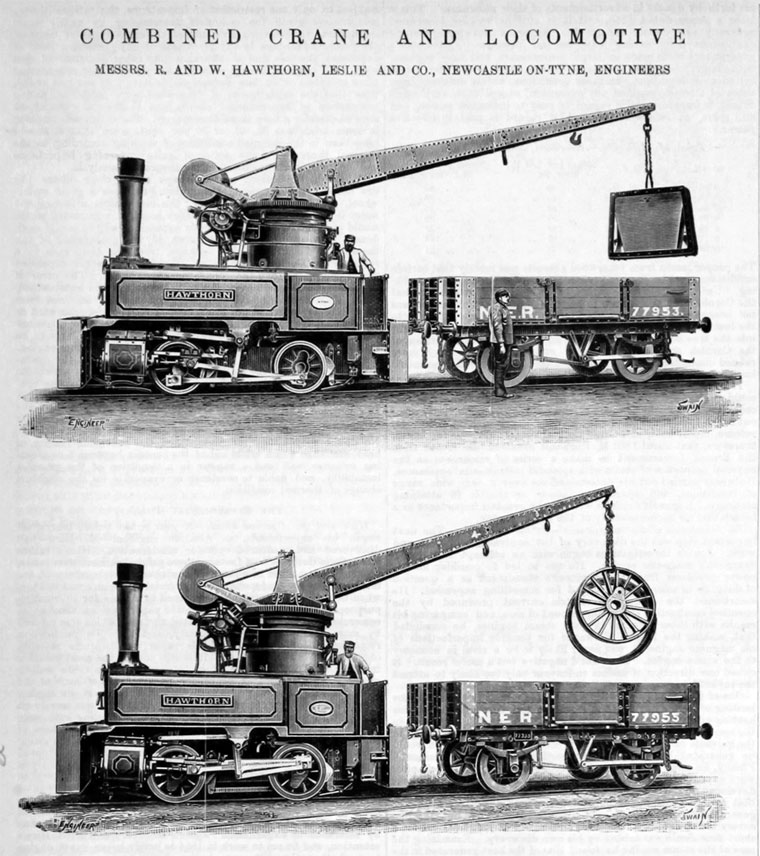 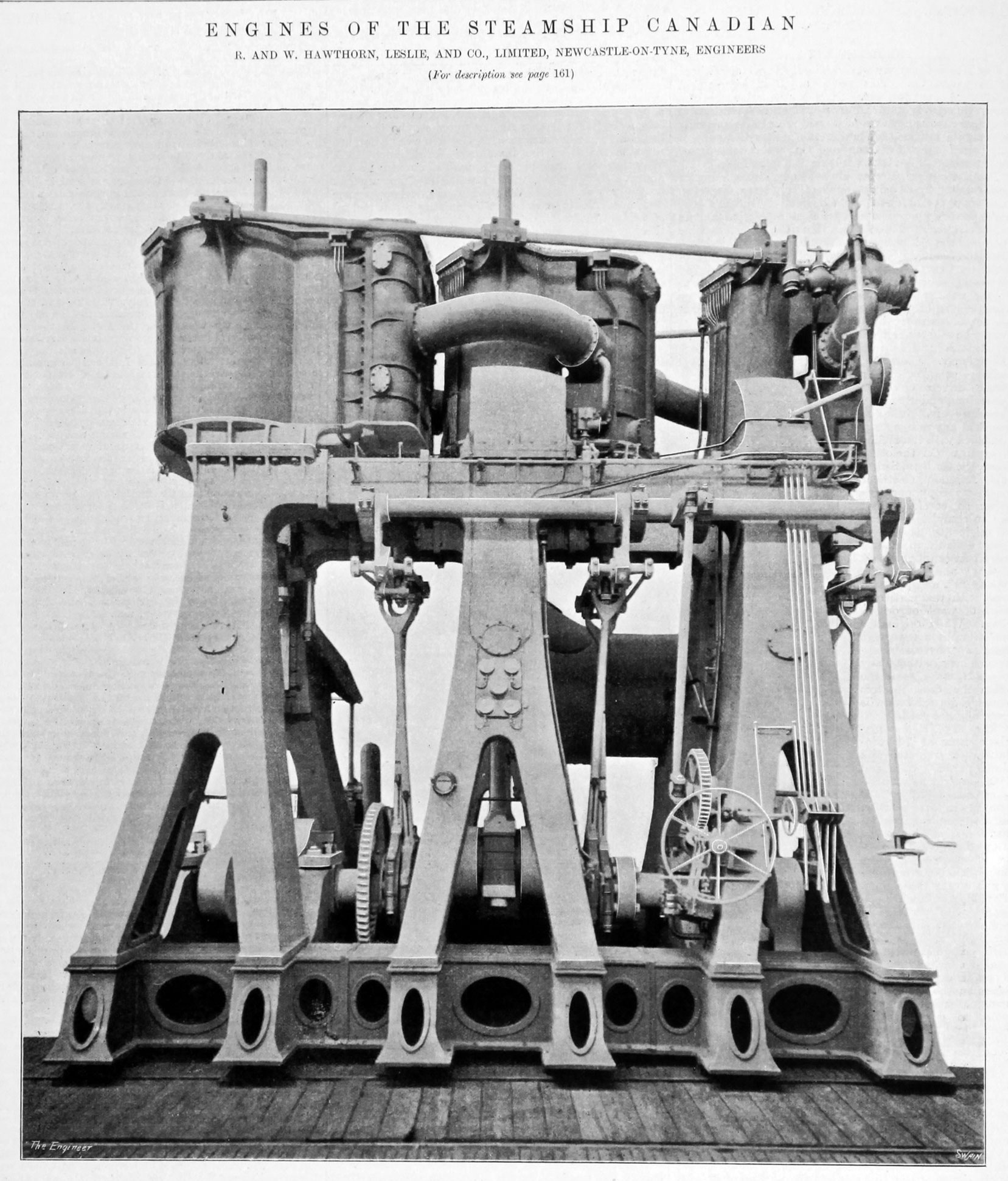 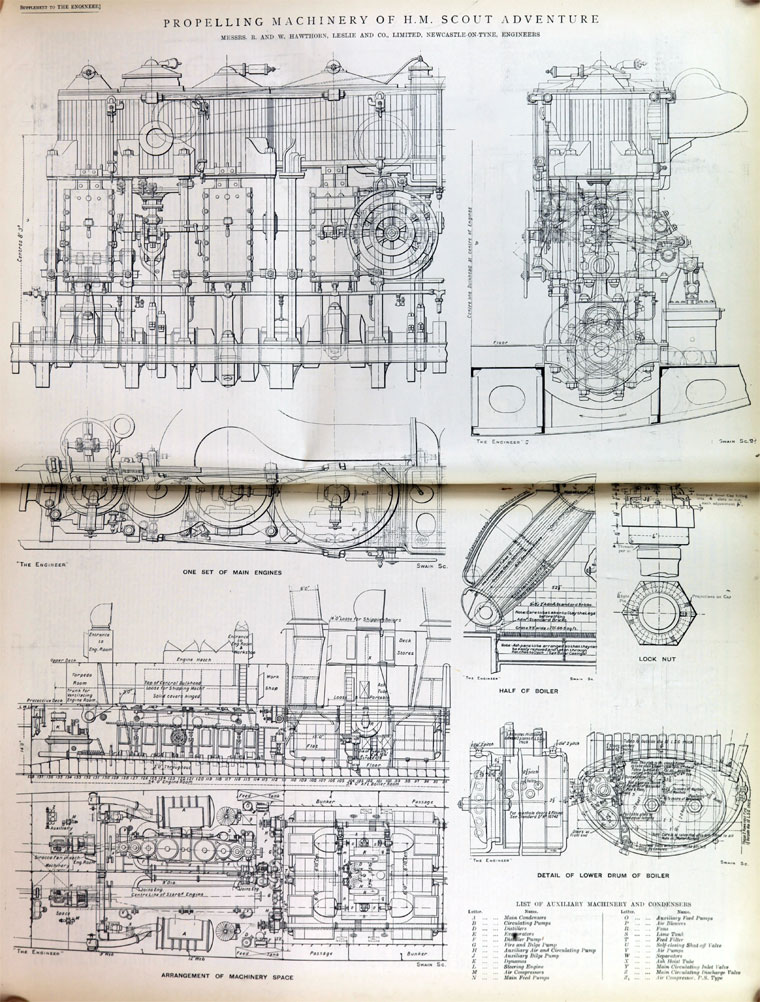 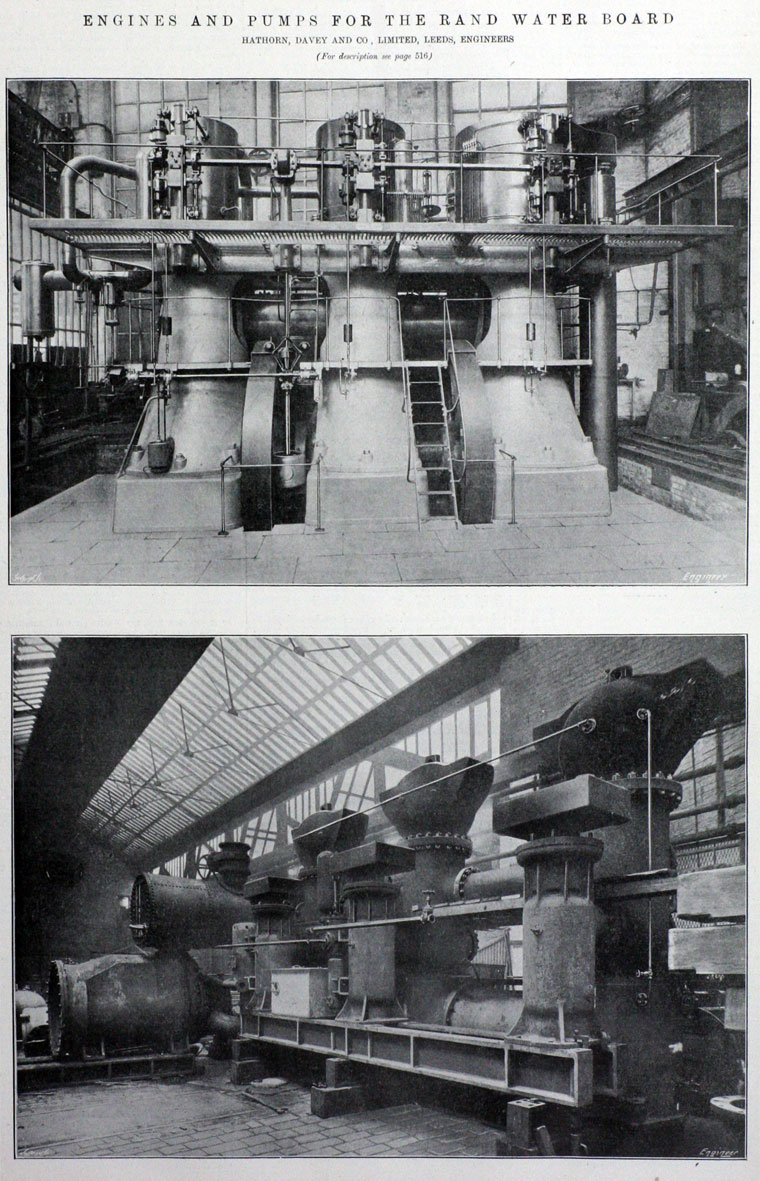 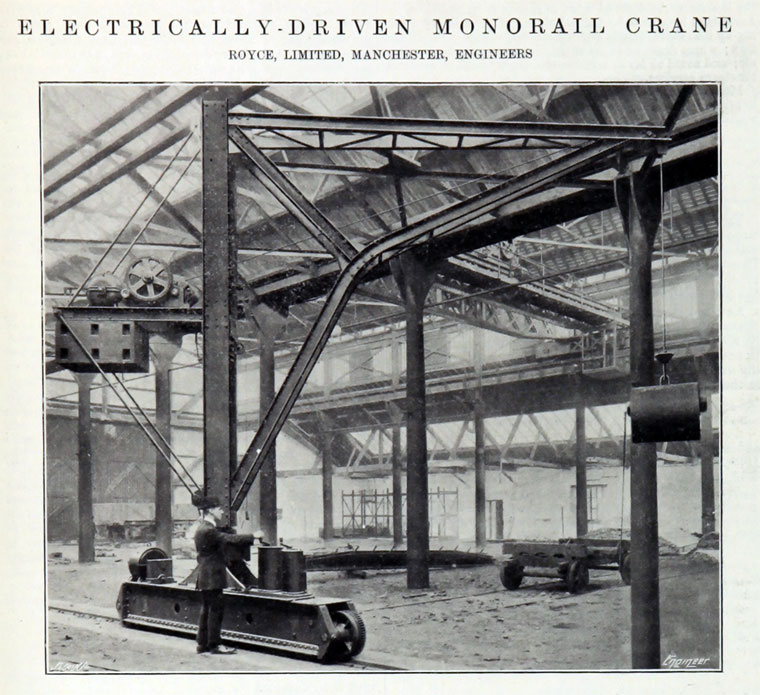 1909. An electrically driven monorail crane made by Royce Ltd of Manchester and erected by Hawthorn Leslie and Co. 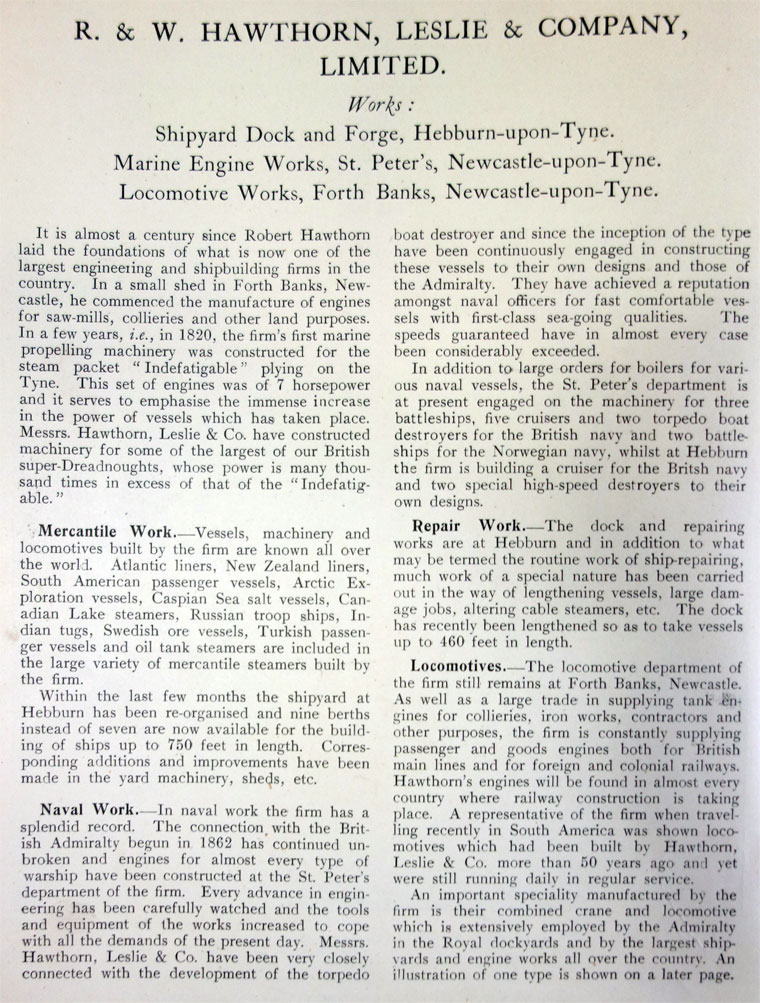 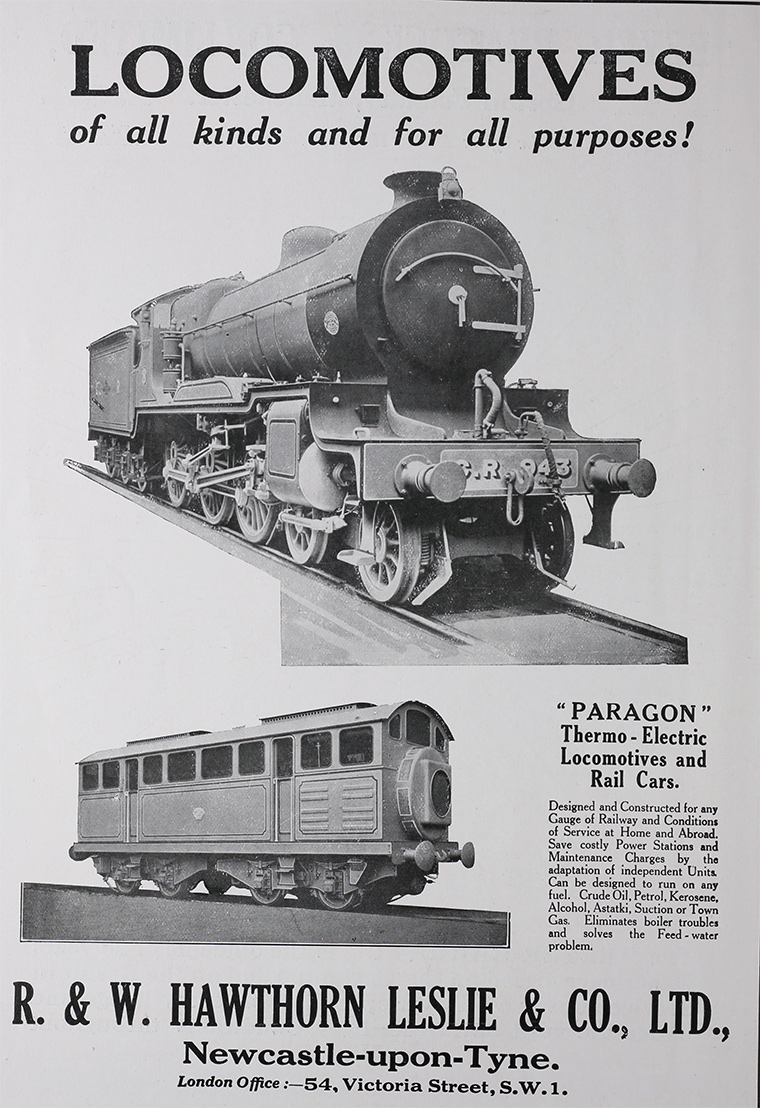 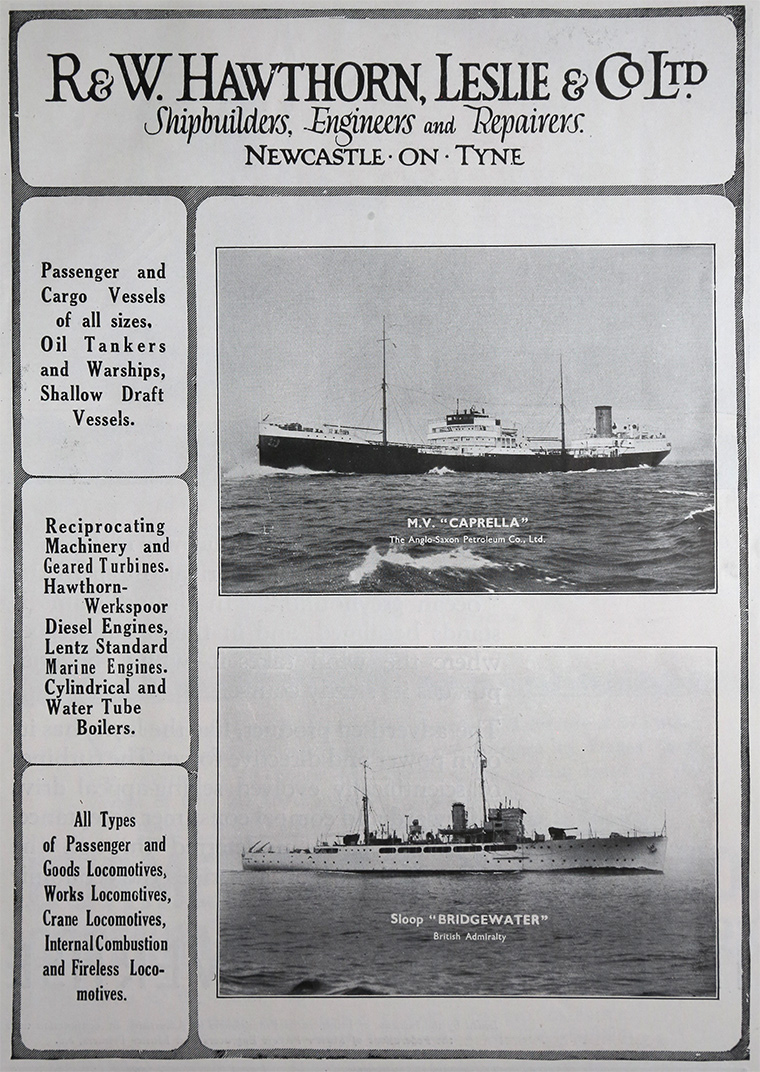 1936. Contemporary with early English Electric powered diesel electric shunting locomotives for the LMSR and GWR - HL produced three number 3'6" gauge versions in 1936 which were supplied to New Consolidated Goldfields Ltd. (Vogelstruisbult Gold). One locomotive was set aside for preservation and is (2017) in store at Germiston Reefsteamers Depot.

R. and W. Hawthorn, Leslie and Company of St. Peter's, Newcastle-upon-Tyne (usually referred to as Hawthorn Leslie), was a shipbuilding and locomotive manufacturer.

1885 Merger of the shipbuilding and graving dock business A. Leslie and Co and the locomotive works of R. and W. Hawthorn[1].

1886 Public company. The company was registered on 7 April, to acquire the businesses of R. and W. Hawthorn engineers of Newcastle-on-Tyne and A. Leslie and Co, shipbuilders of Hebburn-on-Tyne. [2]

1887 Built the triple expansion engines for the SS Courier. They were fitted with Marshall's patent valve gear. The bed plates and pillars were of cast-steel. The 1500 sq ft condenser is separate from the engines and made of gun-metal. The cylinders are 30in., 46 in., and 73 in. respectively by 36 in. stroke. 150 psi steam is supplied by two multitubular boilers; 15 ft 3 in. by 11 ft. The forced draught is supplied by two double-sided fans, each driven by a high speed compound engine. The trial trip toook place on 28th October 1887 on the Admirality course of 9.6 knots between Cullercoats and Newbiggin off the mouth of the Tyne. An average speed of 17.548 knots was obtained, with an indicated horse power of 2979 at 124 revolutions per minute and a vacuum of 26.5 in. [3]

1888 Built a crane locomotive for Palmers Shipbuilding and Iron Co.

1893 After the merger the locomotive side continued making locomotives, among them a 4-2-2-0 with four cylinders - two inside and two outside - connected separately to the two pairs of driving wheels. It was produced for the Chicago World's Fair of 1893 but could not produce sufficient steam to compete effectively with the American products.

1894 Antwerp Exhibition. Details of their display

1899 See 1899 Shipbuilding Statistics for details of production this year

Constructed HMS Viper at the Hebburn yard, the first destroyer equipped with a propulsion turbine[5].

1900 Frank Theodore Marshall was appointed director of R. and W. Hawthorn, Leslie and Co, his father Francis Carr Marshall retiring from the Board.

1900 Engines of the SS Canadian. Article and illustration in The Engineer. [6]

1907 Acquired land adjoining the Forth Banks Works for extensions

1911 Manufacturer of Locomotives for the Railways.[7]

1911 Triple-expansion steam engines for the Şirket-i Hayriye Company's Bosphorus ferry boat Kalender. She was decommissioned and scrapped more than 70 years later, but the starboard engine is preserved and on display at the Rahmi M. Koc Museum in Istanbul. Photo here.

1914 Directory: Listed as Iron Ship Builders and as R. Hawthorne and W. Leslie and Co of Hebburn. [8]

1915 F. G. Smith of the Highland Railway ordered six 4-6-0s to his own designs. Being rejected by that railway as being too heavy, they were taken over by the Caledonian Railway.

A great number of locomotives were built for export, usually to the designs of the Crown Agents, among them many fireless locomotives.

1923 The company opened a new office in Westminster at 3a, Dean's-yard. The office was under the supervision of Mr Robert S. Rowell one of the directors resident in London.[10]

A Short History of The Firm

From 'Short Histories of Famous Firms' by Ernest Leopold Ahrons The Engineer - 1922/07/14.

The firm of R. and W. Hawthorn, Leslie and Co., Limited, is one of the oldest in the country, for its origin dates back more than a century ; but, unlike some of the famous firms whose histories have been recorded in these columns, it has constantly increased in size, and at the present day is one of the largest and foremost of British firms. Locomotive and marine engine construction and shipbuilding form the principal industries with which its name is connected. The original works were founded as an open shed in January, 1817, on the east side of Forth Banks, Newcastle, by Mr. Robert Hawthorn, who began the manufacture of stationary steam engines and millwork. There were only four workmen in addition to Mr. Hawthorn, who worked with them. All the machinery was driven by hand. In 1820 Mr. William Hawthorn became a partner with his brother, and from that date the firm was known as R. and W. Hawthorn. The two brothers were the sons of Robert Hawthorn, who for more than fifty years was engineer to the owners of Walbottle Colliery, near Newcastle, and a man of great mechanical ability.

In 1819 a small portion of the ground upon which the present works stand was purchased. Being on a hill-side, it had to be excavated and prepared for the first workshop by Mr. Hawthorn and his men during the evenings after work hours. About 1820 the firm made the first steam crane for hoisting ballast from ships. It was erected at St. Anthony's Quay, on the Tyne, and at the same period the marine engineering branch was started. In December, 1822, steam power was first supplied to the works for driving the lathes, which until that time had been driven by men turning a hand wheel."