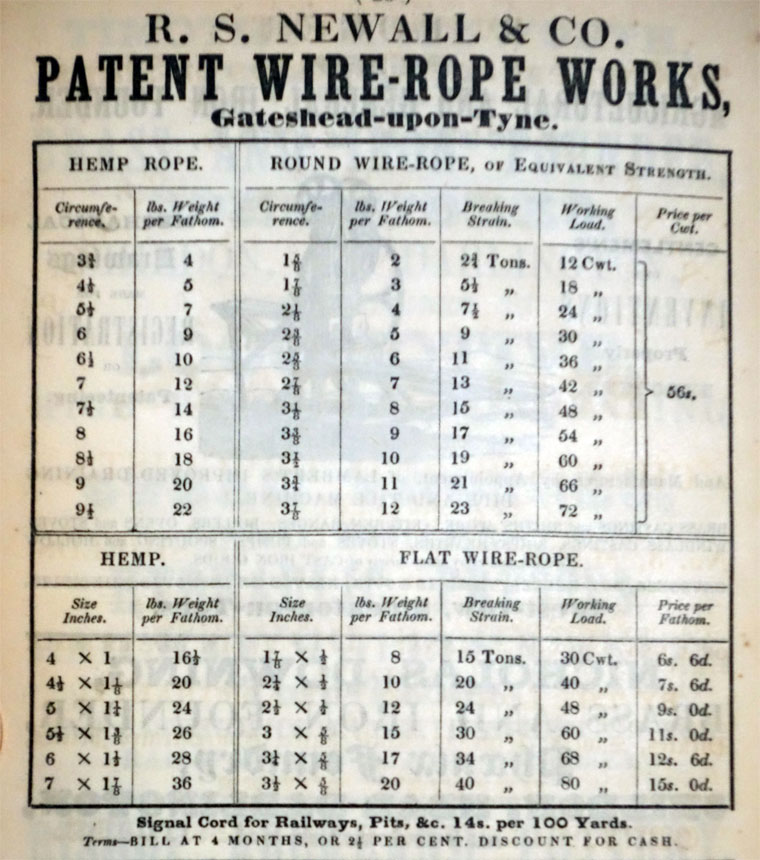 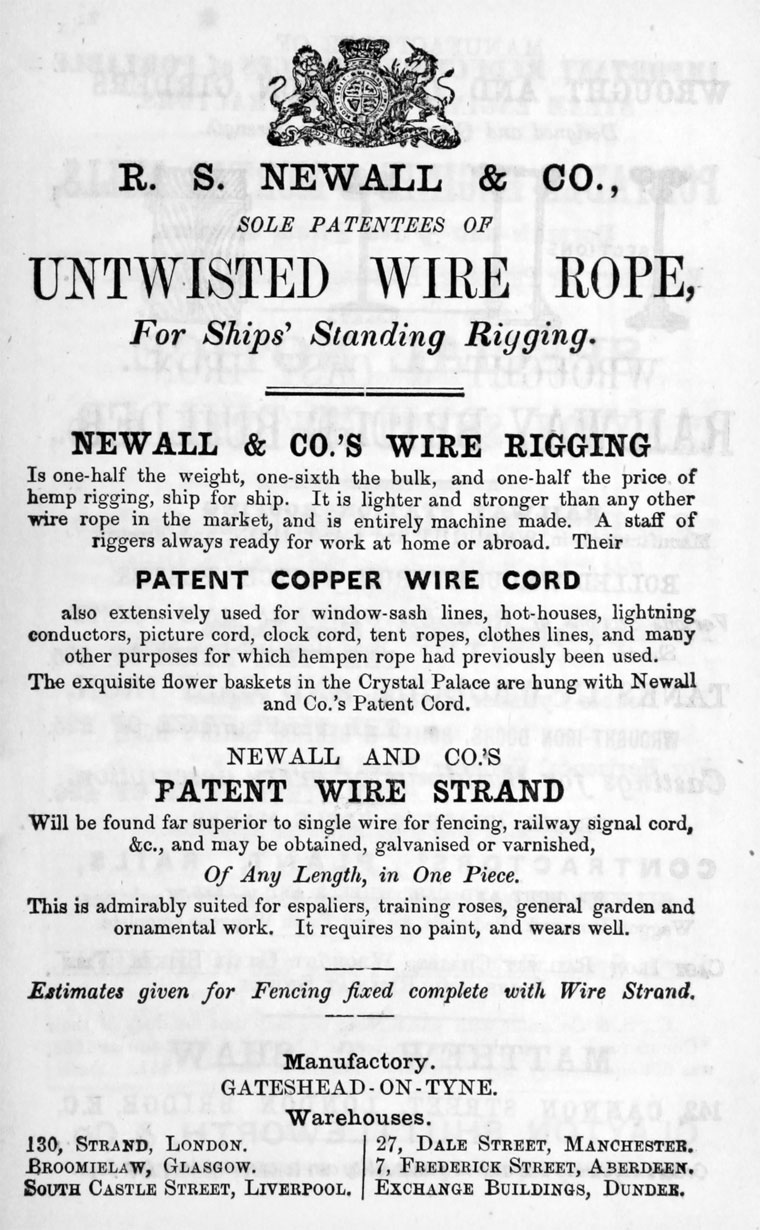 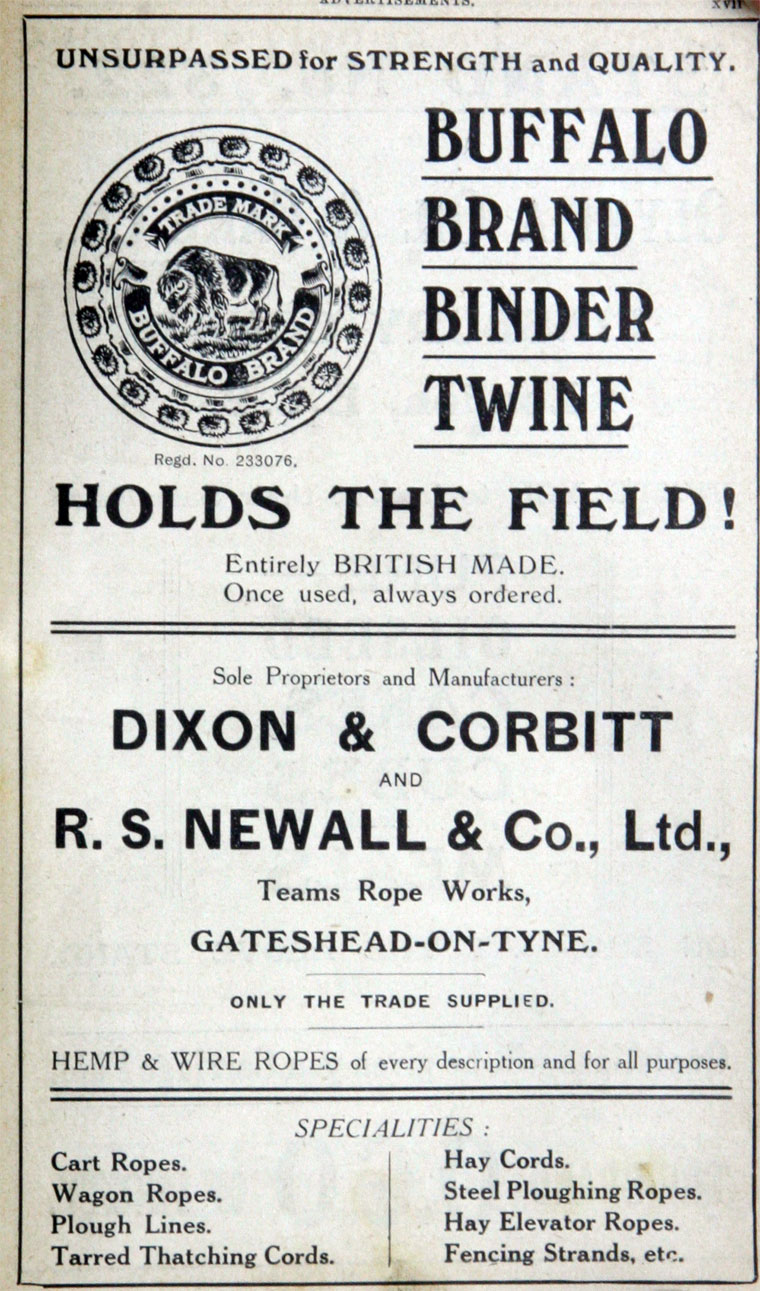 1838 Lewis Gordon visited Wilhelm Albert in Clausthal in the Harz mountains who had developed iron wire ropes for use in mines between 1831 and 1834[1]. Wire ropes had clear advantages over hemp ropes. As a result, Gordon wrote to his friend, R. S. Newall, urging him to "invent a machine for making (wire ropes)"[2].

By 1838 Newall owned an engineering works in Dundee. On receipt of Gordon’s letter, he designed a machine for making wire rope.

1838 On Lewis Gordon’s return from Germany in 1839, they formed a partnership.

1840 Newall of Dundee took out a patent for "certain improvements in wire rope and the machinery for making such rope".

1841 Newall's next patent was taken out in Gateshead; he described himself as a wire rope manufacturer.

1841 R. S. Newall and Co was established by the partners[3] in Dundee to make wire ropes for mining, railway, ships rigging, etc. Newall’s wire rope featured a central core of hemp or other flexible material, which held the individual wires equidistant from each other. Charles Liddell became a partner at some point, but just when is not clear.

The history of telegraphic cable development has been subject to a number of conflicting claims. Newall may have been the person who came up with the idea of a cable within a wire rope.

1850 When E. Weatherly began to produce an armoured cable for the 1851 cross-Channel cable for Submarine Telegraph Co, Newall sued for infringement of his patent and took over the job. R. S. Newall and Co carried out the bulk of the work at Weatherly's factory using men brought from their Gateshead factory[4], the rest being sub-contracted to Kuper and Co who held a similar patent.

The success of the 1851 cross-Channel cable brought many orders for cable to Newall's, who continued to purchase their core from the Gutta Percha Co.

1852 Completion of the submarine cable between England and Ireland, followed by one between Belgium and England the following year.

Then the company supplied cables to Governments and companies who mainly took on the task of laying the cables themselves.[5]

Newall's factory at Birkenhead, near Liverpool, was responsible for armouring half of the 1857 Atlantic cable, the rest being made by Glass, Elliot and Co of Greenwich.

1859 A cable manufactured by Newall's linking Suez and Karachi failed. This was the last cable made by the company for six years.

1861 Newall's London agent, George Boswall, was found to have employed a saboteur to infiltrate the crew laying a cable in 1858 for Glass, Elliot and Co. Newall abandoned the making of submarine cables and sold the good will of that part of his business to Siemens and Halske, who had worked with Newall since 1858 advising on technical matters and verifying the electrical quality of his cables. In the fullness of time Siemens were to become one of the chief players in the cable business, but not before Georg Halske withdrew from the English concern in protest at the risks that he anticipated in taking on Glass, Elliot & Company. [6].

1866 R. S. Newall and Co manufactured and laid a cable for the Danish government.

1870 The company made and laid a cable for the General Post Office between England and Ireland, the final cable manufactured by Newall's.

1886 Dissolution of the Partnership between Robert Stirling Newall, Charles Liddell, and Joseph Gordon Gordon, carrying on the business of Wire Rope Makers, at the Team Wire Rope Works, Gateshead, in the county of Durham, No. 130, Strand, and No. 1, Brunswick-street, Blackwall, in the county of Middlesex, No. 7, New Quay, Liverpool, and No. 68, Anderston Quay, Glasgow. The business was carried on by the said Charles Liddell and Joseph Gordon Gordon on their own account[7]. Newall sold out to his partners and moved to Washington, then to Liverpool where, in 1889, he established R. S. Newall and Son with his son and subsequently with his grandson[8].

1887 Merged with the adjoining firm of Dixon and Corbitt as Dixon Corbitt and R. S. Newall and Co. The two premises were linked by a bridge across the River Team.