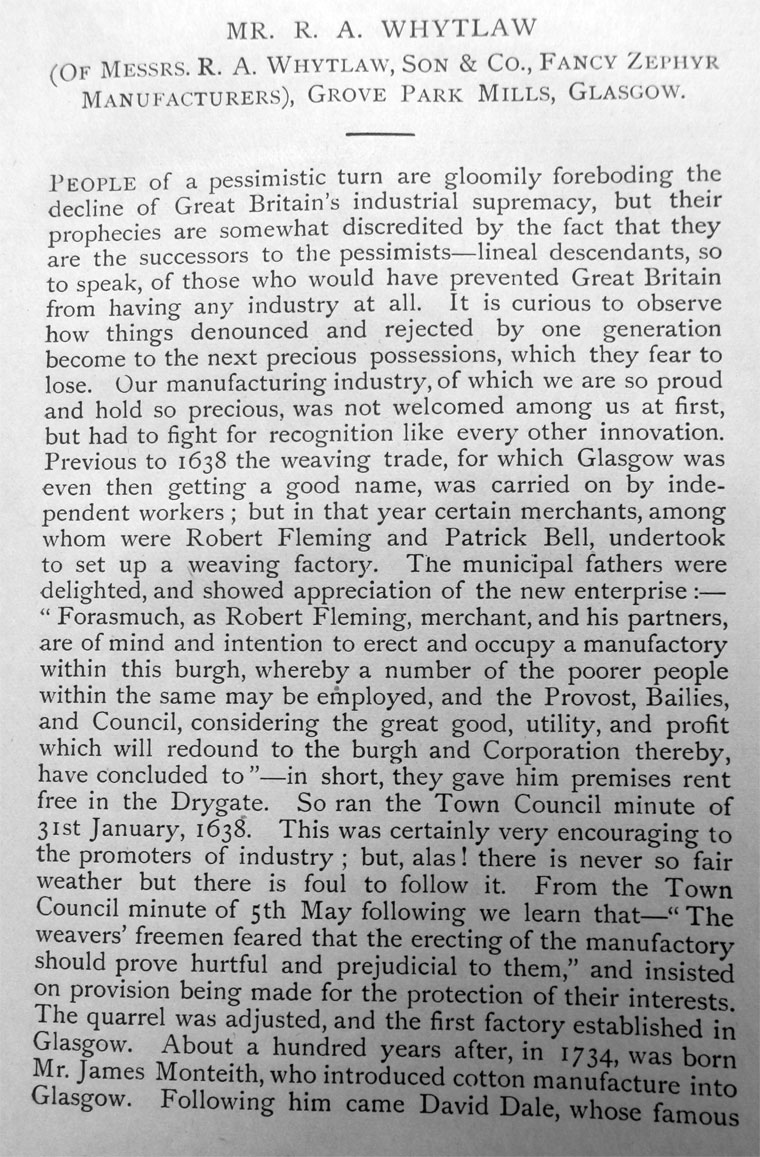 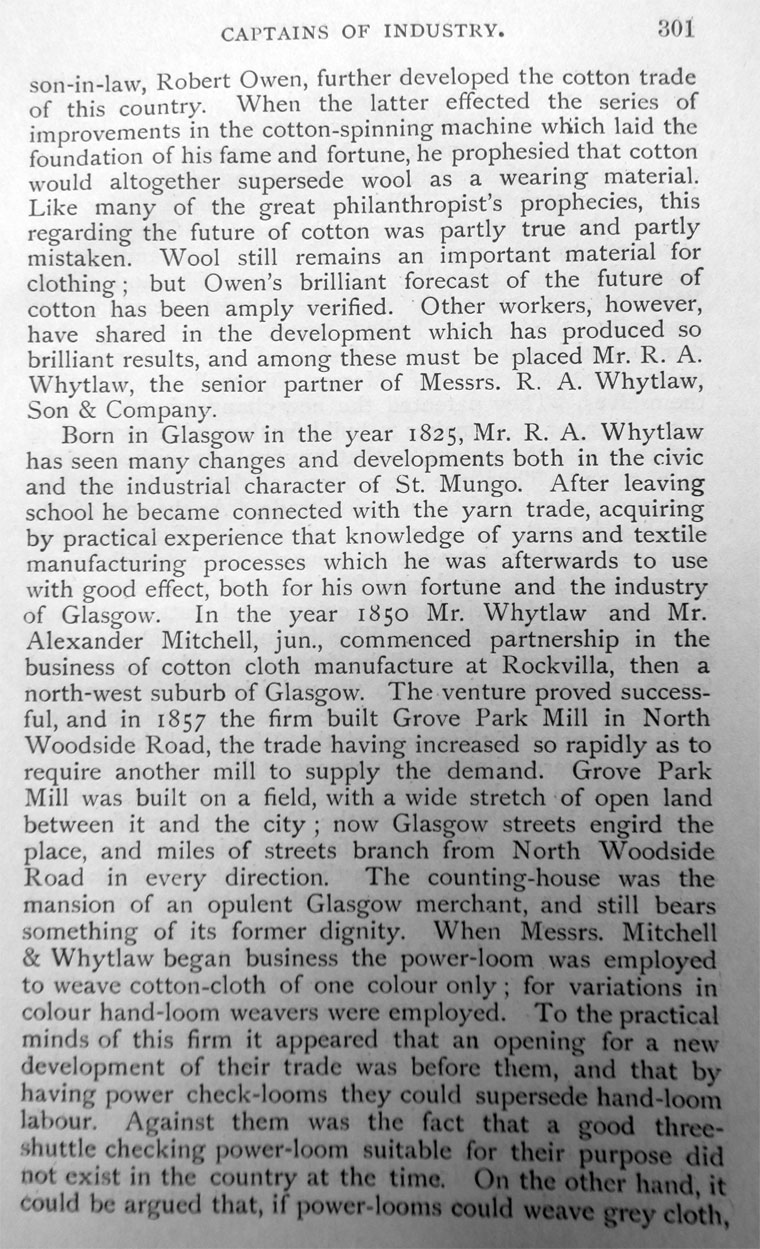 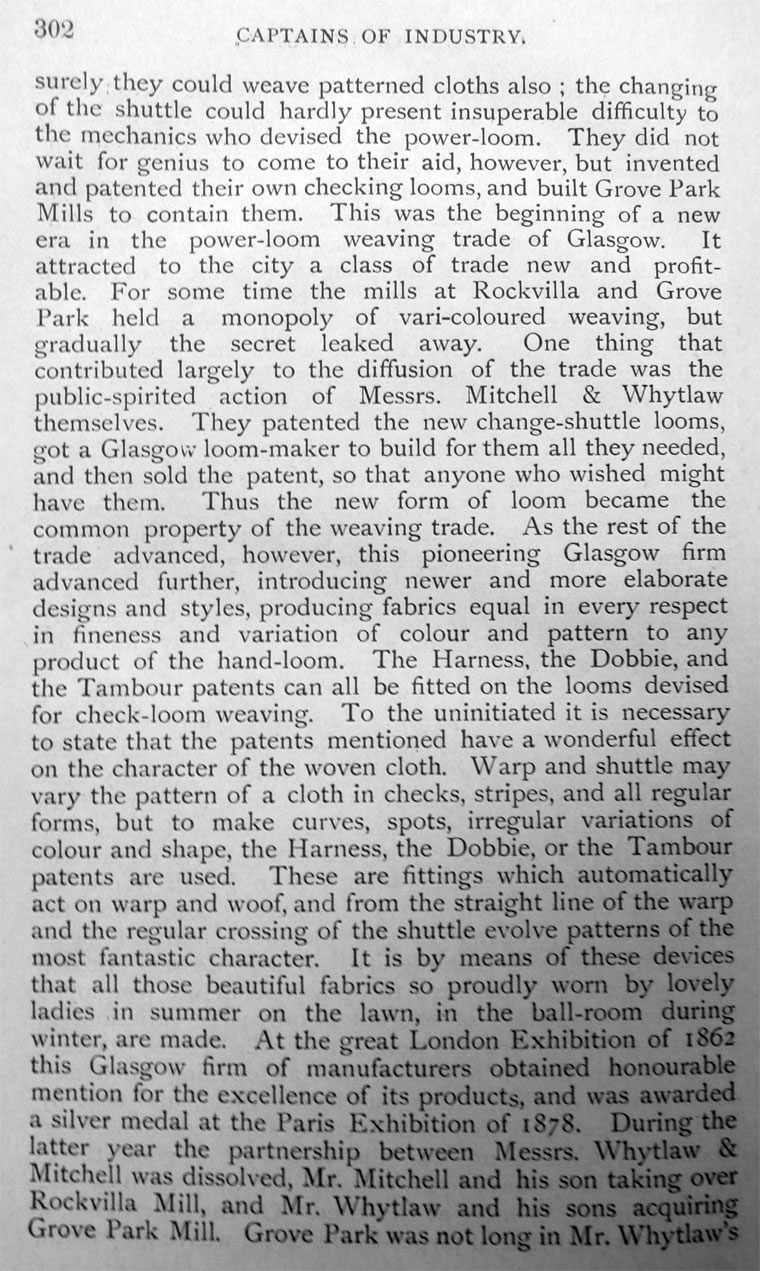 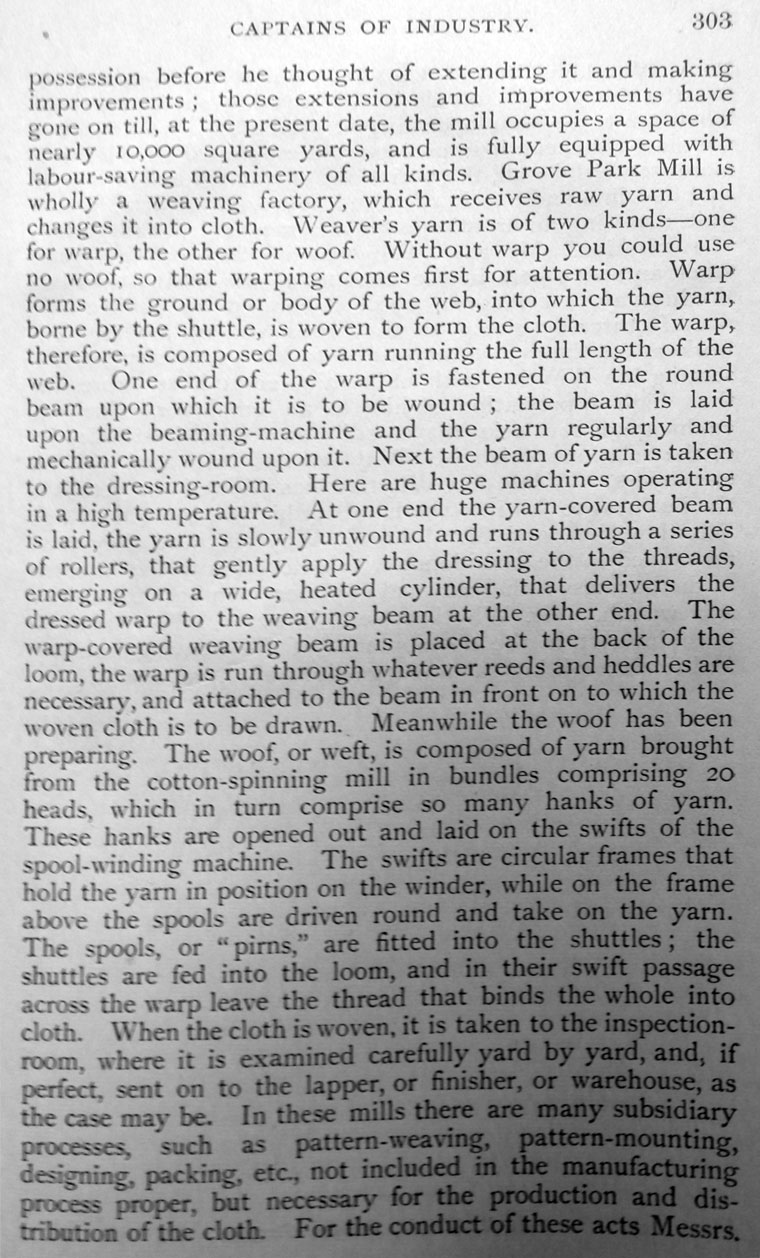 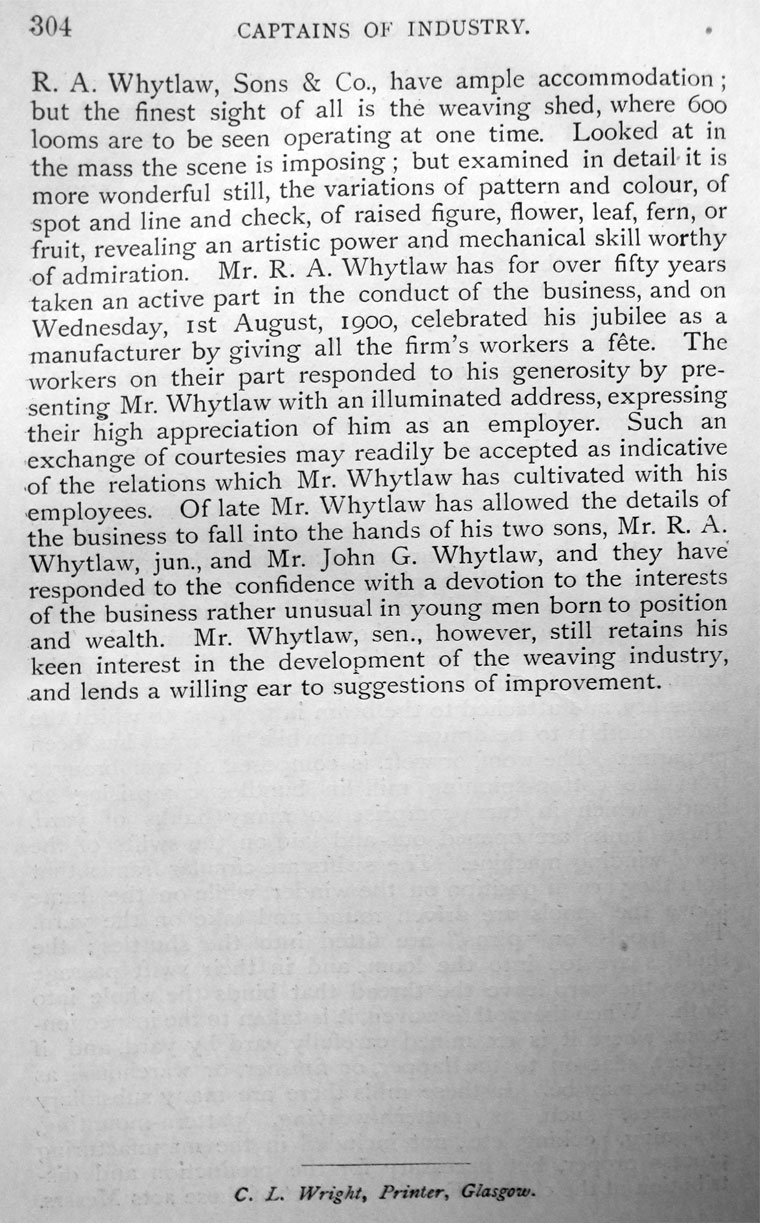 1856. Whytlaw and Mitchell's improvements in weaving.

PEOPLE of a pessimistic turn are gloomily foreboding the decline of Great Britain's industrial supremacy, but their prophecies are somewhat discredited by the fact that they are the successors to the pessimists—lineal descendants, so to speak, of those who would have prevented Great Britain from having any industry at all. It is curious to observe how things denounced and rejected by one generation become to the next precious possessions, which they fear to lose. Our manufacturing industry, of which we are so proud and hold so precious, was not welcomed among us at first, but had to fight for recognition like every other innovation.

Previous to 1638 the weaving trade, for which Glasgow was even then getting a good name, was carried on by independent workers; but in that year certain merchants, among whom were Robert Fleming and Patrick Bell, undertook to set up a weaving factory. The municipal fathers were delighted, and showed appreciation of the new enterprise:- "Forasmuch, as Robert Fleming, merchant, and his partners, are of mind and intention to erect and occupy a manufactory within this burgh, whereby a number of the poorer people within the same may be employed, and the Provost, Bailies, and Council, considering the great good, utility, and profit which will redound to the burgh and Corporation thereby, have concluded to" — in short, they gave him premises rent free in the Drygate. So ran the Town Council minute of 31st January, 1638.

This was certainly very encouraging to the promoters of industry; but, alas! there is never so fair weather but there is foul to follow it. From the Town Council minute of 5th May following we learn that— "The weavers' freemen feared that the erecting of the manufactory should prove hurtful and prejudicial to them," and insisted on provision being made for the protection of their interests. The quarrel was adjusted, and the first factory established in Glasgow.

About a hundred years after, in 1734, was born Mr. James Monteith, who introduced cotton manufacture into Glasgow. Following him came David Dale, whose famous son-in-law, Robert Owen, further developed the cotton trade of this country. When the latter effected the series of improvements in the cotton-spinning machine which laid the foundation of his fame and fortune, he prophesied that cotton would altogether supersede wool as a wearing material. Like many of the great philanthropist's prophecies, this regarding the future of cotton was partly true and partly mistaken. Wool still remains an important material for clothing; but Owen's brilliant forecast of the future of cotton has been amply verified. Other workers, however, have shared in the development which has produced so brilliant results, and among these must be placed Mr. R. A. Whytlaw, the senior partner of Messrs. R. A. Whytlaw, Son & Company.

Born in Glasgow in the year 1825, Mr. R. A. Whytlaw has seen many changes and developments both in the civic and the industrial character of St. Mungo. After leaving school he became connected with the yarn trade, acquiring by practical experience that knowledge of yarns and textile manufacturing processes which he was afterwards to use with good effect, both for his own fortune and the industry of Glasgow.

In the year 185o Mr. Whytlaw and Mr. Alexander Mitchell, jun., commenced partnership in the business of cotton cloth manufacture at Rockvilla, then a north-west suburb of Glasgow. The venture proved successful, and in 1857 the firm built Grove Park Mill in North Woodside Road, the trade having increased so rapidly as to require another mill to supply the demand. Grove Park Mill was built on a field, with a wide stretch of open land between it and the city; now Glasgow streets engird the place, and miles of streets branch from North Woodside Road in every direction. The counting-house was the mansion of an opulent Glasgow merchant, and still bears something of its former dignity.

When Messrs. Mitchell & Whytlaw began business the power-loom was employed to weave cotton-cloth of one colour only; for variations in colour hand-loom weavers were employed. To the practical minds of this firm it appeared that an opening for a new development of their trade was before them, and that by having power check-looms they could supersede hand-loom labour. Against them was the fact that a good three-shuttle checking power-loom suitable for their pin-pose did not exist in the country at the time. On the other hand, it could be argued that, if power-looms could weave grey cloth, surely they could weave patterned cloths also; the changing of the shuttle could hardly present insuperable difficulty to the mechanics who devised the power-loom. They did not wait for genius to come to their aid, however, but invented and patented their own checking looms, and built Grove Park Mills to contain them. This was the beginning of a new era in the power-loom weaving trade of Glasgow. It attracted to the city a class of trade new and profitable.

For some time the mills at Rockvilla and Grove Park held a monopoly of vari-coloured weaving, but gradually the secret leaked away. One thing that contributed largely to the diffusion of the trade was the public-spirited action of Messrs. Mitchell & Whytlaw themselves. They patented the new change-shuttle looms, got a Glasgow loom-maker to build for them all they needed, and then sold the patent, so that anyone who wished might have them. Thus the new form of loom became the common property of the weaving trade. As the rest of the trade advanced, however, this pioneering Glasgow firm advanced further, introducing newer and more elaborate designs and styles, producing fabrics equal in every respect in fineness and variation of colour and pattern to any product of the hand-loom. The Harness, the Dobbie, and the Tambour patents can all be fitted on the looms devised for check-loom weaving.

To the uninitiated it is necessary to state that the patents mentioned have a wonderful effect on the character of the woven cloth. Warp and shuttle may vary the pattern of a cloth in checks, stripes, and all regular forms, but to make curves, spots, irregular variations of colour and shape, the Harness, the Dobbie, or the Tambour patents are used. These are fittings which automatically act on warp and woof, and from the straight line of the warp and the regular crossing of the shuttle evolve patterns of the most fantastic character. It is by means of these devices that all those beautiful fabrics so proudly worn by lovely ladies in summer on the lawn, in the ball-room during winter, are made.

At the great London Exhibition of 1862 this Glasgow firm of manufacturers obtained honourable mention for the excellence of its products, and was awarded a silver medal at the Paris Exhibition of 1878. During the latter year the partnership between Messrs. Whytlaw Mitchell was dissolved, Mr. Mitchell and his son taking over Rockvilla Mill, and Mr. Whytlaw and his sons acquiring Grove Park Mill. Grove Park was not long in Mr. Whytlaw's possession before he thought of extending it and making improvements; those extensions and improvements have gone on till, at the present date, the mill occupies a space of nearly 10,000 square yards, and is fully equipped with Labour-saving machinery of all kinds. Grove Park Mill is wholly a weaving factory, which receives raw yarn and changes it into cloth. Weaver's yarn is of two kinds-one for warp, the other for woof. Without warp you could use no woof, so that warping comes first for attention. Warp forms the ground or body of the web, into which the yarn, borne be the shuttle, is woven to form the cloth. The warp, therefore, is composed of yarn running the full length of the web. One end of the warp is fastened on the round beam upon which it is to be wound; the beam is laid upon the beaming-machine and the yarn regularly and mechanically wound upon it.

Next the beam of yarn is taken to the dressing-room. Here are huge machines operating in a high temperature. At one end the yarn-covered beam is laid, the yarn is slowly unwound and runs through a series of rollers, that gently apply the dressing to the threads, emerging on a wide, heated cylinder, that delivers the dressed warp to the weaving beam at the other end. The warp-covered weaving beam is placed at the back of the loom, the warp is run through whatever reeds and heddles are necessary, and attached to the beam in front on to which the woven cloth is to be drawn. Meanwhile the woof has been preparing. The woof, or weft, is composed of yarn brought from the cotton-spinning mill in bundles comprising 20 heads, which in turn comprise so many hanks of yarn. These hanks are opened out and laid on the swifts of the spool-winding machine. The swifts are circular frames that hold the yarn in position on the winder, while on the frame above the spools are driven round and take on the yarn. The spools, or "pirns," are fitted into the shuttles; the shuttles are fed into the loom, and in their swift passage across the warp leave the thread that binds the whole into cloth. When the cloth is woven, it is taken to the inspection-room, where it is examined carefully yard by yard, and if perfect, sent on to the lapper, or finisher, or warehouse, as the case may be. In these mills there are many subsidiary process such as pattern-weaving, pattern-mounting, deigning, packing, etc., not included in the manufacturing process proper, but necessary for the production and distribution of the cloth.

For the conduct of these acts Messrs. R. A. Whytlaw, Sons & Co., have ample accommodation; but the finest sight of all is the weaving shed, where 600 looms are to be seen operating at one time. Looked at in the mass the scene is imposing; but examined in detail it is more wonderful still, the variations of pattern and colour, of spot and line and check, of raised figure, flower, leaf, fern, or fruit, revealing an artistic power and mechanical skill worthy of admiration. Mr. R. A. Whytlaw has for over fifty years taken an active part in the conduct of the business, and on Wednesday, 1st August, 1900, celebrated his jubilee as a manufacturer by giving all the firm's workers a fete. The workers on their part responded to his generosity by presenting Mr. Whytlaw with an illuminated address, expressing their high appreciation of him as an employer. Such an exchange of courtesies may readily be accepted as indicative of the relations which Mr. Whytlaw has cultivated with his employees.

Of late Mr. Whytlaw has allowed the details of the business to fall into the hands of his two sons, Mr. R. A. Whytlaw, jun., and Mr. John G. Whytlaw, and they have responded to the confidence with a devotion to the interests of the business rather unusual in young men born to position and wealth. Mr. Whytlaw, sen., however, still retains his keen interest in the development of the weaving industry, and lends a willing ear to suggestions of improvement.