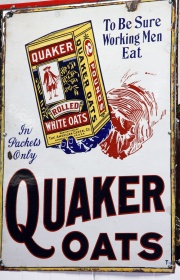 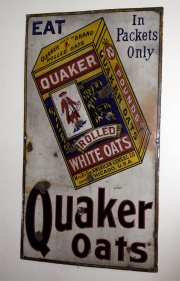 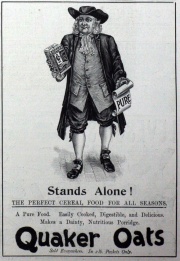 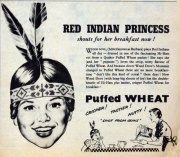 Late 1880s the company merged with other cereal mills in Iowa and Ohio, becoming the American Cereal Co.

1894 The company applied for British trademarks.

1901-onwards the company was run by Robert Stuart and other members of the Stuart Family, becoming the Quaker Oats Co.

2001 In August the company merged with PepsiCo.

The Quaker Oats Company of Chicago established a London agency in 1893 to handle imports of porridge oats from Canada.

Quaker Oats Ltd was incorporated as a wholly-owned subsidiary in 1899.

After the First World War small manufacturing plants were established at Ware, Hertfordshire, and at Rotherhithe.

The present works at Southall was built in 1936.

Quaker entered the pet food market in 1957 with Ful-O-Pep, a dry dog food. This product, along with other dry dog foods — Gravy Dinner and Mor-Meat — achieved a modest degree of success, while other canned and biscuit-type products manufactured by the parent company in America were imported for test marketing under the brand name 'Ken-L'.

A new canned dog food, Chunky, was introduced in 1964; the product was initially imported from an associated company in Holland, but following satisfactory performance in test market it was decided to establish a plant at Southall. This plant came into operation in 1967.

In 1970 the company acquired the business of Felix Catfood and its non-trading subsidiary, Felix Pet Foods Ltd. Felix Catfood had a small plant at Biggleswade where it produced a dry cat food. The manufacturing process and formulation were improved, and production was subsequently transferred to Southall.

In recent years the company has extended its range by introducing a canned cat food (Felix) and two semi-moist products (Chunky Minced Morsels for dogs and Felix Tender Morsels for cats).