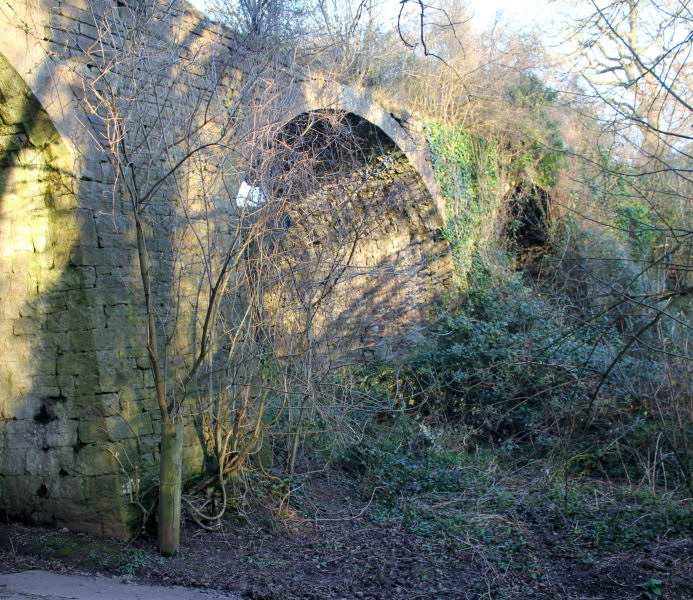 A remarkable survivor from c.1832: viaduct near Purton

in the Forest of Dean, Glos.

This projected tramway was never completed, although a significant relic remains - the c.1832 three-arch viaduct near Purton (on the north side of the River Severn). The viaduct crosses the narrow lane between Etloe and Purton.

The later Forest of Dean Central Railway folllowed much of the intended route.

1830 Advert: 'STEAM COMMUNICATION, TO AND FROM Bristol, Purton, the Centre of the Forest of Dean, in the County of Glocester, (at Foxes Bridge,) THE TOWN OF ROSS, IN THE COUNTY OF A HEREFORD.
AT a Meeting held at the King's Head Inn, in the said Town of Ross, the 14th day of October, 1830, for the purpose of taking into consideration the utility of making a STEAM CARRIAGE ROAD and STEAM CONVEYNANCE from the said Town of Ross, to adjoin to and communicate at Foxes Bridge, in the Centre of the Forest of Dean, with the projected Purton Steam Carriage Road, (the Shares of which already Subscribed for and filled,) and Steam Packet Commutation from Foxes Bridge and Purton to and from Bristol,
CHARLES CHURCH, Esq. in the Chair,
Resolved, That the formation of such a Road and Conveyance will be of great benefit to the Inhabitants of the Forest of Dean, the Towns of Ross and Mitcheldean, and surrounding populous neighbourhood, by opening a certain, speedy, and cheap communication with the Centre of the Forest of Dean and City and of Bristol; whereby the charge of Carriage for Coals and all of Goods and Merchandise will be reduced full one half.
That the Sum of £16,700, the estimated costs of such undertaking, be raised in £50 Shares, and a Company formed for carrying the measure into effect.
That in order to cover all contingencies attendant upon the proposed measure, 400 Shares be created, thereby forming a capital of £20,000. .......
......That Mr. Moses Teague be appointed Engineer and Surveyor, who is to prepare all necessary Surveys, Maps, Plans, and Sections, for carrying on the Work. .......
NOTICE is hereby given, That application is intended to be made to Parliament in the next Sessions, for Acts for making and maintaining a Railway or Steam Carriage-road (with convenient Wharfs to be attached thereto), from or near the Town of Ross, in the County of Hereford, to or near a certain place called Foxes Bridge, in his Majesty's Forest of Dean, in the County of Glocester, and to unite to, and communicate there, with the projected Purton Steam Carriage-road. And for making and maintaining a collateral Branch Railway or Steam Carriage-road, Railways, or Steam Carriage-roads, from the said Railway or Steam Carriage-road. All which said Railways or Steam Carriage-roads and Wharfs are intended to be made from, in, and through, or into and upon his Majesty's said Forest of Dean, and the Parishes, Hamlets, and Places of Ruardean, Hamlet of Newland, Mitcheldean, Abinghall Lea, Lea Hamlet, and Weston-under-Penyard, in the County of Glocester, and Hope Mansell, Walford, Weston-under-Penyard, Linton, Bridstow, and Ross, in the County of Hereford.
October, 1830, J. S. COLLINS'[1]

1830 'In a late Journal we stated the intended formation of a Railway Steam-carriage Road from the town of Ross to the Forest of Dean, and thence to Purton Pill : we learn from the Glocester Journal, it has since been ascertained-that it is practicable to construct moveable Bridge at Purton, to cross at low water, by winding it up and down an inclined plane during high water ; this means will give every facility for five or six hours crossing at low water ; and all the advantages we mentioned applicable to Bristol, will also be derivable to Glocester, as the termination of the Steam-carriage Railway at Purton is immediately opposite to the Glocester and Berkeley Canal, and merchandize will, by this means, find as ready and cheap a conveyance as from Bristol, if not more advantageous in both points view.'[2]

The 'Purton Pill Railway' Bill was defeated on its second reading.[3]