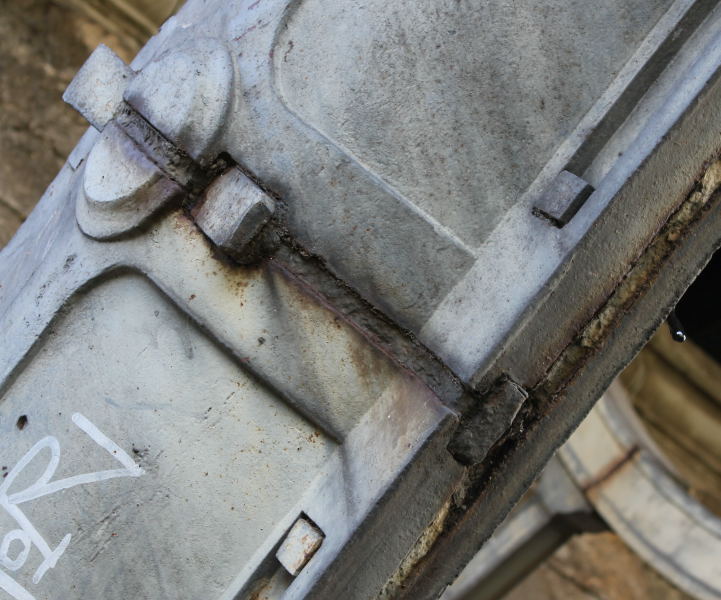 This was built as a composite cast iron/wooden arch bridge over the Guadalquivir in the centre of Seville, Spain.

The cast iron arches remain, but the bridge loads are now borne by large box-section steel beams, which can be seen in the photos. The steel beams are 140m long, with a cross section of 2.50m x 4.45m. It offers a good opportunity to study an unusual type of mid-19th bridge, but the most curious aspect is invisible: the arches' iron castings enclose laminated wooden arches.

The bridge was opened in 1852, and very closely resembled the 1834 Pont du Carrousel in Paris, designed by Antoine Rémy Polonceau. The engineers responsible for the construction of the Triana bridge were Gustave Steinacher and Ferdinand Bernadet from France.

The San Antonio foundry (la Fundición San Antonio) supplied the 27,248 iron castings used in construction. This foundry was created by Narciso Bonaplata in the Convent of San Antonio. The iron for the castings came from Guriezo, while the wrought iron came from ironworks in Pedroso, Marbella, Vizcaya and Scotland. Tram lines were installed in 1889. Also in 1889, a steam roller passing over the bridge caused the fracture of some castings. A decision was made to strengthen the bridge, and subsequently various repairs were carried out.[1]

Polonceau's arch ribs were of a pioneering design, having a laminated wooden core inside hollow cast-iron main arches, bonded to the metal by bitumen. See 'The Iron-Wood Composite Section of the Carrousel Bridge in Paris (1834)' by Jorge Bernabeu Larena.

The Puente de Isabel II, the Pont Saint Thomas in Strasbourg, and the Pont de Bourguignon-les-Conflans are surviving examples of this type of structure.

Polonceau's arch ribs are described as being of elliptical cross section, but there is a discontinuity at the top and bottom due to the presence of flanges to allow the two halves of the tube to be bolted together. The bolted construction was adopted instead of casting the pieces as lengths of 'pipe', one aim being to minimise the risk of having unequal wall thickness resulting from the core shifting in the foundry mould. This type of construction was also necessary to allow the wooden core to be accommodated. The transverse stiffness offered by the elliptical section reduced the amount of cross-bracing required between the arch ribs.

The aims of the laminated wooden core in the arch ribs were to reduce the susceptibility to vibration, to improve the load-carrying capacity of the ribs, to improve the resistance to shock loads, and to facilitate the positioning of the iron pieces during construction. Perhaps the latter claim was making a virtue out of necessity. In fact Polonceau listed seven advantages of his system[2], some of which reflected concerns about potential defects in the castings, and he stated that having the wooden core would allow broken or otherwise defect castings to be replaced fairly readily.

Polonceau's expectation was that the bitumen, poured in hot to fill the space, would ensure adhesion between the iron and the wood. The Paper by Jorge Bernabeu Larena provides the results of an assessment showing that the load-carrying capacity of the ribs was improved by the wooden core, regardless of whether it was successfully bonded by the bitumen. However, presumably a close fit was necessary in the absence of adhesion. Polonceau carried out small scale bending tests using thin cast iron pipes 1 metre long, 60 mm diameter, and 5 mm wall thickness. Polonceau himself admitted that the tests were by no means representative, but they did show that the ultimate strength of the tubes was markedly increased by the presence of the bitumen bonded wooden cores. Interestingly, the amount of deflection before failure was also increased.

Examination of Triana Bridge shows that bitumen has leaked out of the ribs at various points, presumably due to heating by the sun, although it is not only the outermost (most exposed) ribs that are affected.

The inspiration for the circular rings in the spandrel came from the Sunderland Bridge. Polonceau adopted them to reduce the transmission of vibration from the deckto the arch ribs and thence to the abutments and foundations. In France the rings acquired the name 'ronds de serviette' (napkin rings).

The composite wood and iron design involved a complex assembly of numerous components. 27,248 iron castings have been mentioned above, and the long laminated arches had to be formed and erected. Nevertheless the design did prove fairly popular in France, where at least a dozen examples were built. For comparison, British cast iron bridges of that era were much simpler. See, for example, Bigsweir Bridge.

Some of the constructional details are shown in the photos, although not all aspects are understood.

The way the 'semi-elliptical' castings are bolted together can be clearly seen. The square bolt heads are recessed in grooves on one side of the casting. The joints between individual castings are staggered, as can just be seen in photo 6. It will be noted (e.g. photo 12) that there are wedges inserted in slots at the abutting ends. Photo 13 shows an example where the casting has cracked, presumably due to the force exerted by the wedge. H. H. Edwards' comments about the Pont du Carrousel seem to imply that these wedges were used to establish the initial compression force in the arch ribs.

It is not clear how the joint faces of the castings are bedded together. They may have be planed by machine, or it may be that the faces were provided with narrow 'chipping strips' where limited contact was made, with gaps elsewhere being filled with rust cement. This would be not inconsistent with the appearance seen, for example in photo 12. However, Henry Hinde Edwards stated that the joint faces of the much earlier Pont du Carrousel were 'faced' at the foundry, which may imply that they were planed.

It will be seen that there are slightly raised ribs on the flanks of the outer arch ribs. These are only on the outer faces of the outer arches, and are merely decorative. Photo 9 shows that the rib is absent from some of the endmost castings, and a wrought iron strip was riveted on instead.

Typically, cross bracing is provided between the arch ribs by cruciform section bars. Rather than being attached by lugs cast integral with the rib castings, the lugs are separate castings, bolted on. See photos 14 & 15.

The spandrel rings, which originally supported the deck from the arch ribs, required quite a bit of work to make them fit at four points. Cast iron brackets were provided to make the transition at the four points of contact on each ring. The required degree of contact was obtained using iron or lead packing. Photo 16 shows lead packing beneath one bracket. Note that the flange of the ring has cracked in this area. In fact the large rings seem to have been prone to cracking. Cracked examples can be seen in photos 8 & 17.

It will be seen that the spandrel rings in photos 7 & 8 still support riveted beams. It is not clear whether these continue to carry load.