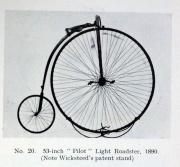 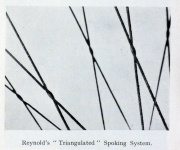 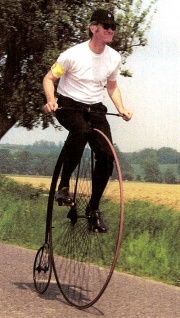 The Pilot Co. was founded in 1868 by H. J. Timberlake, trading as Timberlake and Co. He introduced a solid rubber tyre secured to the metal rim by a wire running through the centre of the tyre. He also invented the front wheel roller brake, operated by rack and pinion from a twisting handlebar. Later the business was acquired by Hickling and Co, and given by them as security to the rubber manufacturers who made tyres for them. In 1886 the goodwill was purchased by C. J. Reynolds, who carried on the business till 1900, when he closed down.

1890 Jan/Feb. The Stanley Exhibition of Cycles at the Crystal Palace. Novel form of spokes that cross in the centre and are then returned to the same side from which it started. Illustrated.

No. 20. 53-inch 'Pilot' light-roadster bicycle, made by the Pilot Cycle Co., Maidenhead, 1890, to the order of P. A. Nix, Brixton Ramblers B.C. Fitted with C. J. Reynolds's triangulated system of spoking, Patent No. 3775/1889. This system was advertised as “The wheel of the future." In company with other riders of the 'ordinary.' I tested the Reynolds triangulated wheel and found it too rigid and un-yielding to be either speedy or comfortable.

Accompanying the exhibit is a letter from C. J. Reynolds, of which the following is a copy:—

"In building a tangent wheel it was necessary that a tangent in the right hand direction should be balanced by a tangent in the left hand direction, so that the number of spokes in the wheel was really divided up into pairs (pairs of tangents). The result was that when pressure was put upon the pedal, the tendency was to tighten one of each pair of tangents, and to loosen its companion.

Thus the rim was only supported by half the spokes in the wheel, the other half doing no work; in fact their original tension was relaxed; with the result that although the wheels ran well, they had a tendency to buckle. This showed me that what was wanted to make the wheel rigid was to arrange the spokes so that one of each pair (of tangents) would tighten up the other.

One way of doing this was to fix the spokes at the points of intercession, where they crossed. This was done by binding with wire and soldering: but it was not successful. It was then that I invented the Triangulated wheel, which was a complete success. But unfortunately just about that time the 'ordinary' bicycle went out of fashion, the dwarf 'safety' taking its place. On the small wheels of the 'safety' bicycle my triangulated system was no better than the plain tangent, and as it cost more, it was dropped. (Signed) C. J. REYNOLDS."

The "Pilot," bicycle is displayed on Wicksteed's patent double-purpose stand (No. 101) made by Charles Wicksteed and Co, Stamford Road Works, Kettering. Date 1882. Price 4/6. [2]