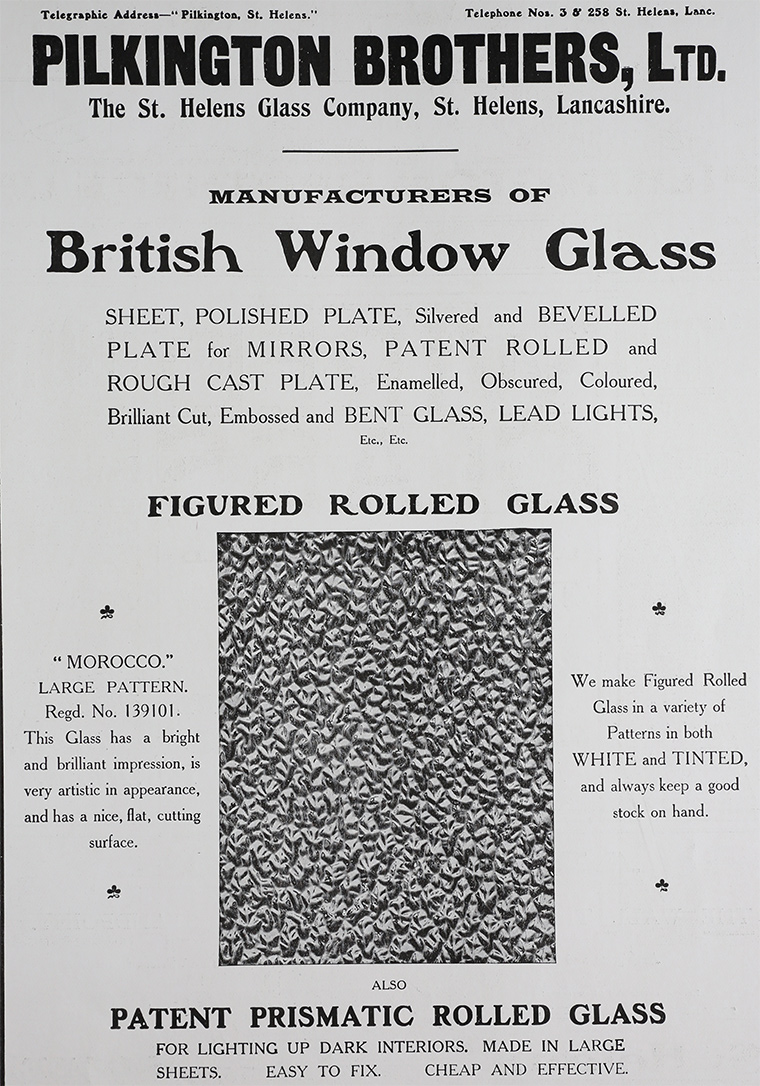 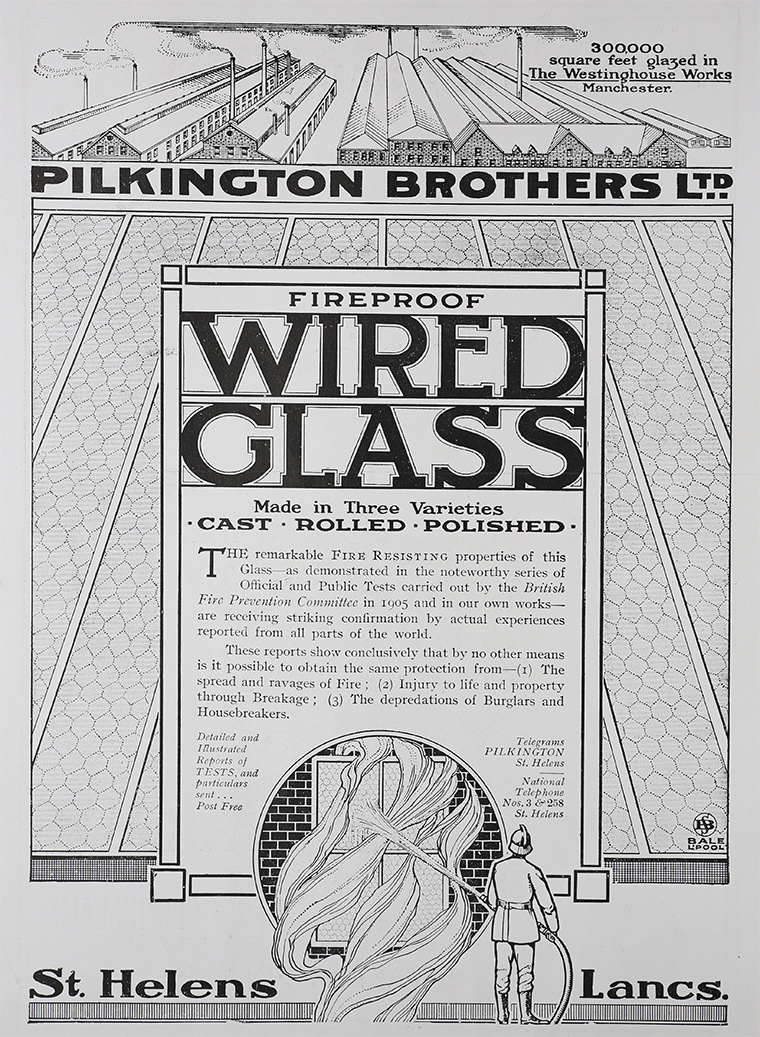 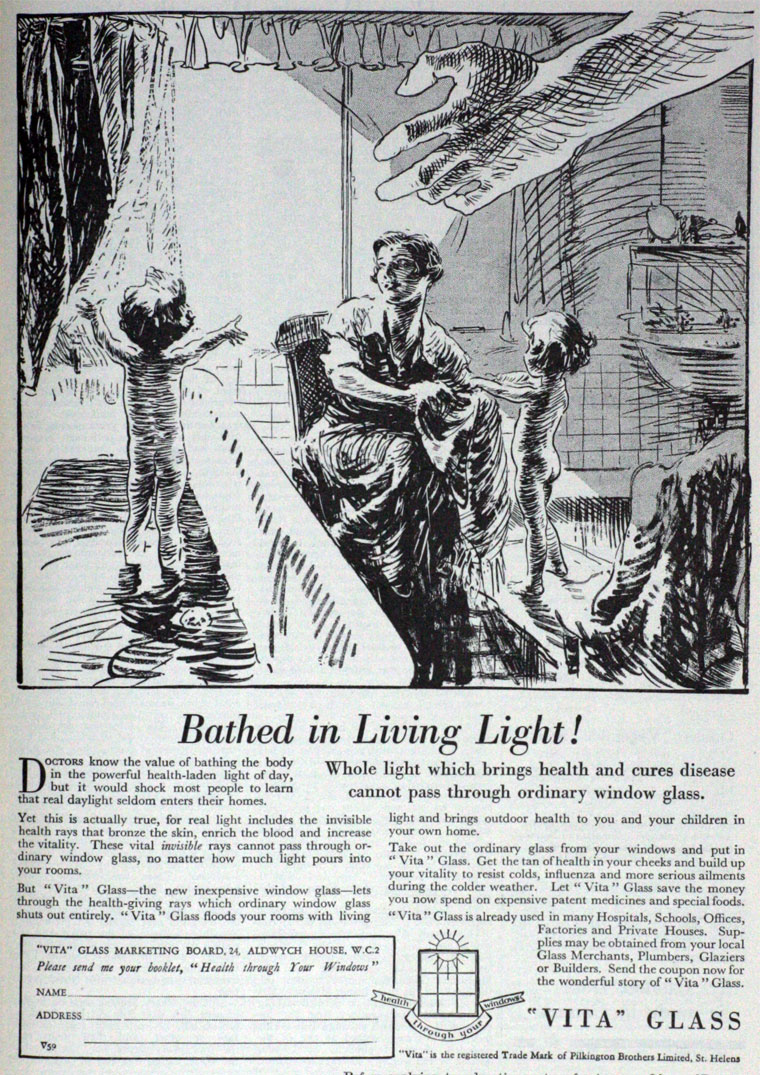 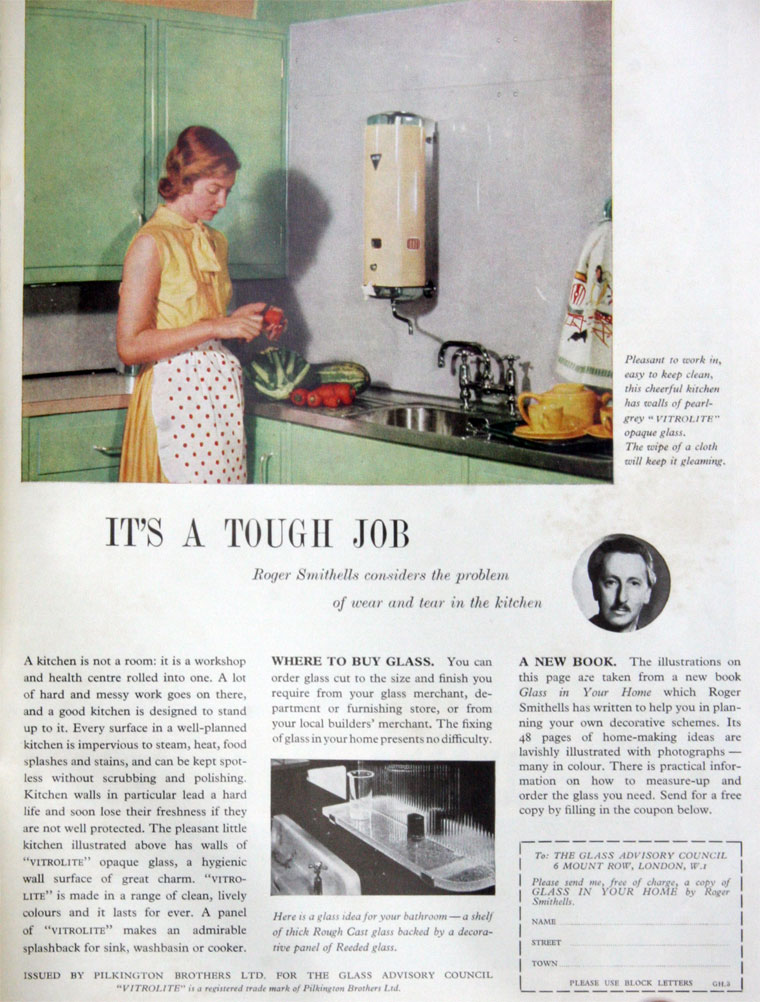 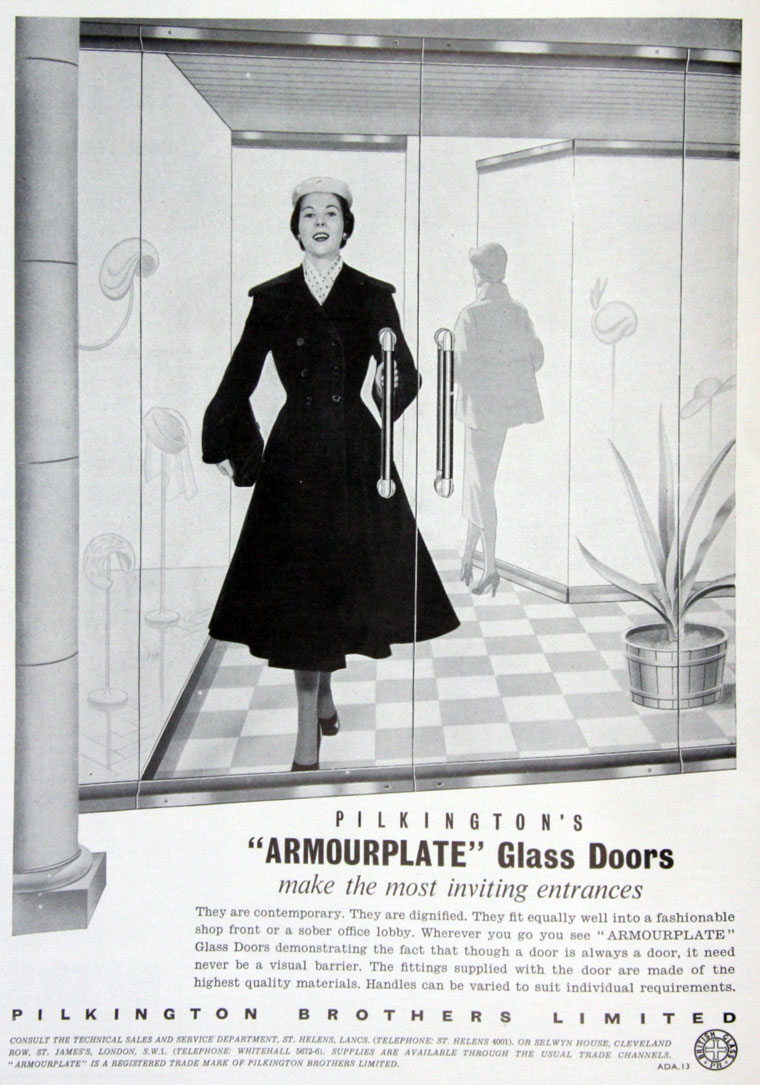 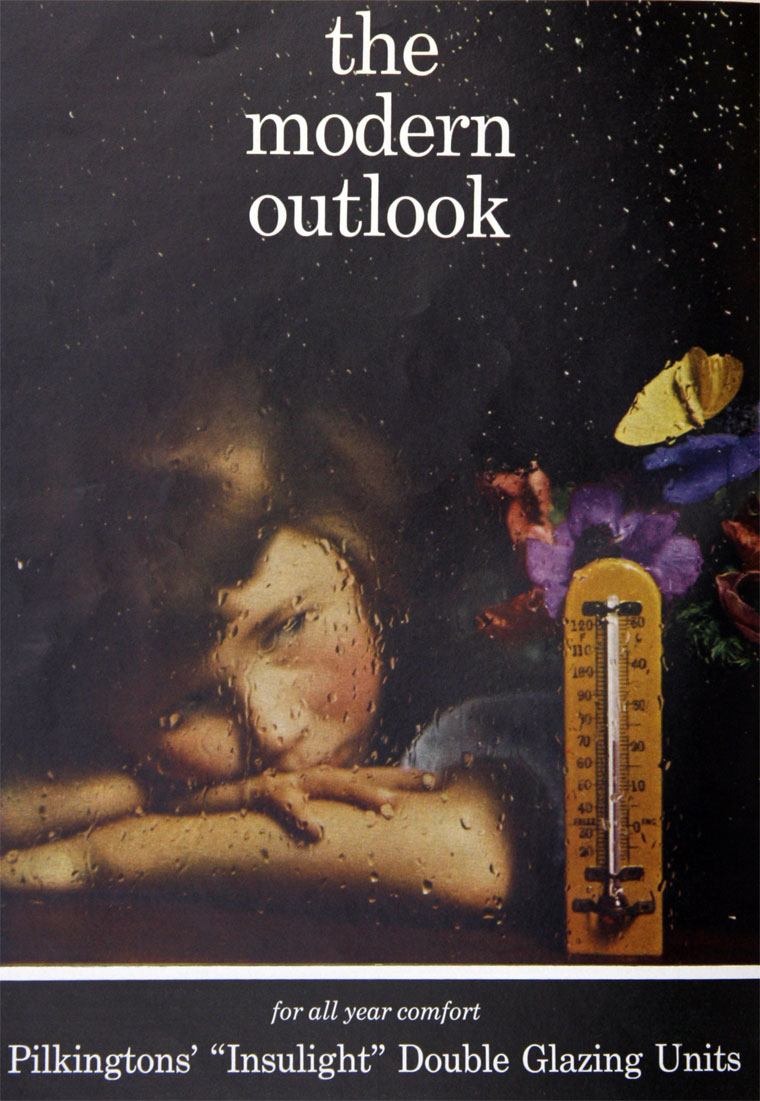 Pilkington is the largest glass manufacturer in the UK.

c.1826 The St. Helens Crown Glass Company was founded; William Pilkington (1800–1872) and his brother-in-law Peter Greenall were each invited to subscribe a two-elevenths share, along with another prominent local family, the Bromilows, and two glass-making specialists, including John William Bell.

1838 The Pilkingtons sold their wine and spirit business.

Early 1840s, Peter Greenall sold his shares in the business. Henry Deacon, after completing his apprenticeship, moved from Nasmyth, Gaskell and Co to become manager of the glass-polishing department at Pilkingtons (and their highest-paid employee).

1845 The introduction of the cylinder process was a major development. The repeal of the glass excise duty in 1845, by removing the financial advantages bestowed upon crown glass manufacturers, placed Chance Brothers of Birmingham, James Hartley and Co of Sunderland, Cooksons of Newcastle and Pilkington Brothers, all of whom had started to produce sheet glass by the cylinder process, in a stronger competitive position than those firms which continued to make only crown glass.

William and Richard Pilkington had 6 sons each; their eldest sons joined the business; later two of William's younger sons (George (1840–1923) and Leonard (1847–1925)) moved to Widnes to work in manufacturing chemicals.

1844 William's eldest son William Pilkington (1827-1903), having started with a lowly job in the factory, became a partner

1849 It was named Pilkington Brothers.

1851 Deacon left to work for Hutchinsons Alkali Works at Widnes.

By 1860 Pilkingtons and Chance Brothers had nine furnaces each, three more than Hartleys, and between them these three glassmaking firms were producing 75% of all the window glass made in this country. In the mid-nineteenth century three innovations helped to streamline the sheet glass industry. They were the Siemens regenerative furnace (1863) which was more economical on fuel; the Beivez lehr cooling oven which reduced annealing time from eight hours to thirty minutes (1870); and the Siemens tank furnace (1873) which replaced the traditional pot furnace, making glass melting a continuous process.

1870s The Pilkington brothers set up a new factory to produce plate glass on the outskirts of St. Helens.

1876 Pilkingtons chose as its site Cowley Hill on the outskirts of St. Helens and by 1876, five years after the decision to manufacture plate glass had been taken, Pilkingtons was producing as much as the Ravenhead factory, then in the hands of the London and Manchester Plate Glass Co, and ten years later its production was three times as great.

1894 The company became Pilkington Brothers Limited. The company was registered on 30 June, to take over the business of glass manufacturers of the firm of the same name. [1]

1903 During the last quarter of the nineteenth century, strong competition continued to be experienced from the continental manufactures as their production capacity expanded. One British company after another succumbed and by 1903, within 30 years of Pilkington's entry into this branch of the flat glass industry, it had become sole British producer.

1907 After Richard Austin Pilkington fell ill, he went to live at Colorado Springs where the air was particularly dry and thin. The company brought in his brother-in-law, Edward Herbert Cozens-Hardy as his replacement.

1920/1 New works built at Kirk Sandall near Doncaster for the production of polished plate glass. Also made "Vitrolite".

c.1927 Pilkington developed a process for making thin plate glass suitable for Triplex and became an important supplier to Triplex[3]

Early 1930s A process for large-scale toughening of glass was developed by St. Gobain in France; Pilkington obtained an exclusive licence for Britain. Pilkington and Triplex Safety Glass Co then entered into agreements for Triplex to manufacture toughened glass for sale only to the motor and aircraft industries. The Triplex companies paid a royalty of 10 per cent on sales until April 1936. Pilkington reserved the right to exploit toughened glass for other uses[4]

By 1935 the company had developed the 'twin' machine which ground both sides of the ribbon of glass simultaneously. These developments gave Pilkington an international advantage in plate manufacture which they shared by licensing the continuous and the 'twin' grinders to overseas manufacturers.

1938 Pilkington acquired an interest in the glass fibre operation at Firhill, Glasgow, of Chance Brothers and Co which had been started in the late 1920s.

1944 Glass Fibre was reorganized as Fibreglass and a new works was erected at Ravenhead, St. Helens, for the production of insulation materials. Early development in the manufacture of glass fibre reinforcements was carried out at Firhill and at Birkenhead.

By 1945 Pilkington had acquired a 50 per cent shareholding in Chance Brothers.

1950 Company's most significant development was the invention of the float-glass process, which became the universal method for making plate glass and flat glass for windows.

1950 Sold a 60 percent interest in James A. Jobling and Co to free up capital for other purposes; Pilkingtons continued to hold a minority stake in Joblings[5]

By 1951 Chance became a wholly-owned subsidiary. The two companies had for some time co-operated in the field of rolled glass, which was now Chance's sole flat glass product. Chance had been involved in the manufacture of optical glass in Birmingham since 1848. Prior to the Second World War a 'shadow' optical factory was erected by Pilkington at St. Helens in case of war damage to the Birmingham plant. In 1957, the optical side of both companies was combined in the new Chance-Pilkington Optical Works at St. Asaph, North Wales.

Between 1953 and 1957 Alastair Pilkington and Kenneth Bickerstaff invented the Float Glass Process, a revolutionary method of high quality flat glass production by floating molten glass over a bath of molten tin, avoiding the costly need to grind and polish plate glass to make it clear. Pilkington then allowed the Float Process to be used under licence by numerous manufacturers around the world. More recently it devised a self-cleaning coated float glass product, called Pilkington Activ™. This self-cleaning glass has a coating which uses a method of photo-catalysis to break down organic dirt with sunlight. The dirt is then washed away by the rain during a hydrophilic process.

Pilkington, through Triplex, also became a major world supplier of toughened and laminated safety glass to the automotive and building industries.

During the 1960s and 1970s, Pilkington used the flow of Float royalties to invest in float glass plants in several countries; also to acquire major existing glass producers in USA, Germany and elsewhere.

1965 Pilkington owned more than 50 per cent of Triplex which then became a subsidiary of Pilkington.

1970 The company was floated on the public stock market. It was for many years the biggest employer in the northwest industrial town. The distinctive blue-glass head office tower-block still dominates the town's skyline. The company became Pilkington plc.

2006 Pilkingtons was taken over by Nippon Sheet Glass of Japan.

Pilkington has a turnover of £2.7 billion, with manufacturing operations on five continents, and sales in more than a hundred countries.