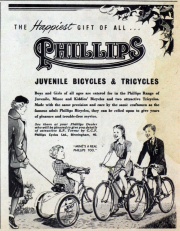 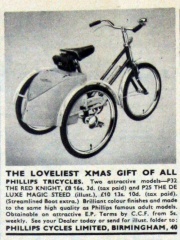 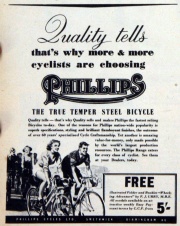 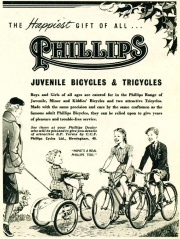 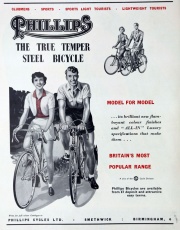 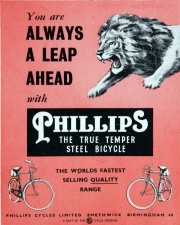 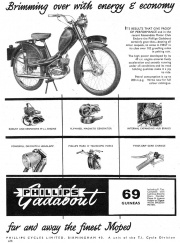 1908 The Birmingham firm of J. A. Phillips and Co, manufacturer of bicycles and bicycle components, bought the Credenda Works and gave up its Birmingham premises.

c.1920 Tube Investments AGM was told that Phillips, a maker of bicycle parts, had been acquired in the past year[1].

1954 Having previously been in the cycle business, the company entered the powered market late that year with a complete machine derived from a bicycle. It had a 49cc two-stroke engine mounted above the bottom bracket, chain-driven rear wheel, the petroil tank on the top tube and braced forks. It was listed for the following three years.

1956 Tube Investments subsidiary the British Cycle Corporation was formed to take over and control its bicycle making subsidiaries in the Birmingham area, namely Armstrong Cycles, Brampton Fittings, Hercules Cycle and Motor Co, Phillips Cycles, and Walton and Brown[3]; the activities would be concentrated in a large factory at Handsworth; large redundancies followed.

1959 Added to the range was a Panda, a three-speed Gadabout and another with a 50cc Villiers engine.

1962 The range was cut back to the Gadabout with either a Rex or a Villiers engine, but later in the year two new models appeared. These were based on Raleigh mopeds and made under licence from Motobécane of France.

By 1964 The moped had been built for two years; then the owners, Raleigh, dropped the name.

See Also: Renowned The World Over - The Phillips Cycle Company by Sam Whitehouse