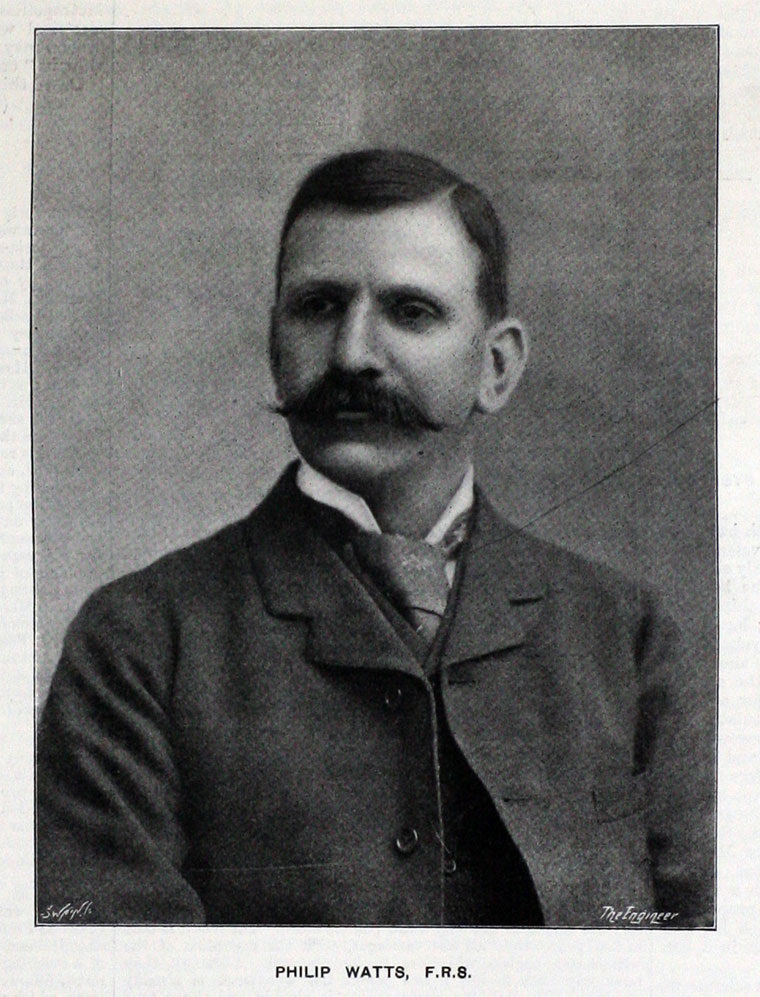 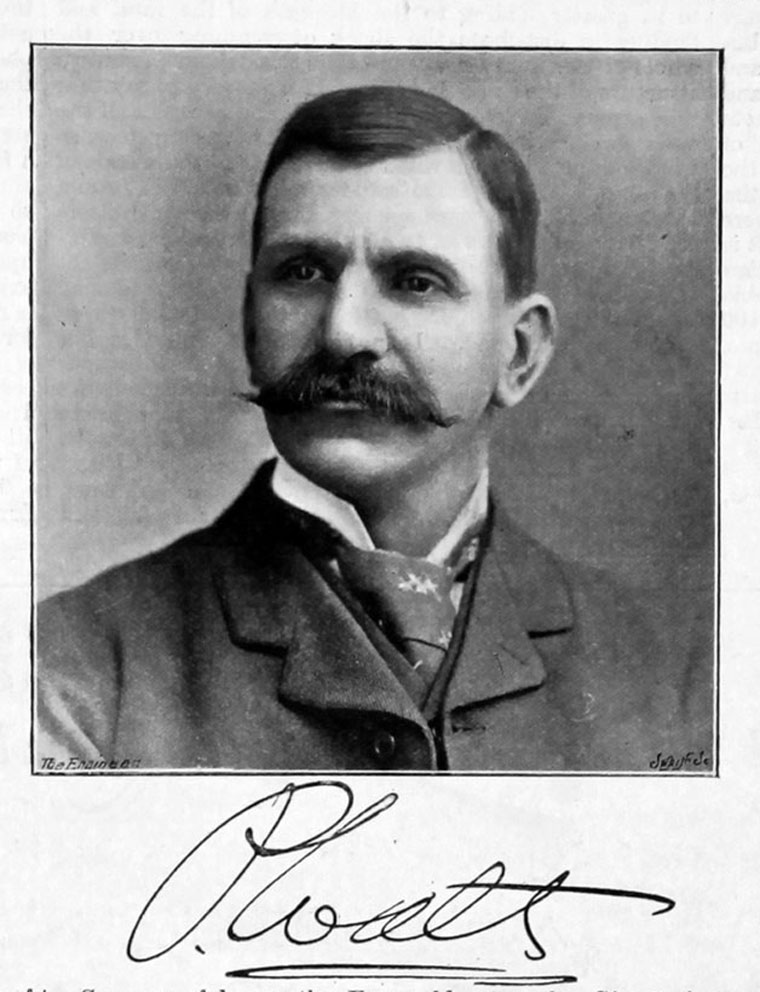 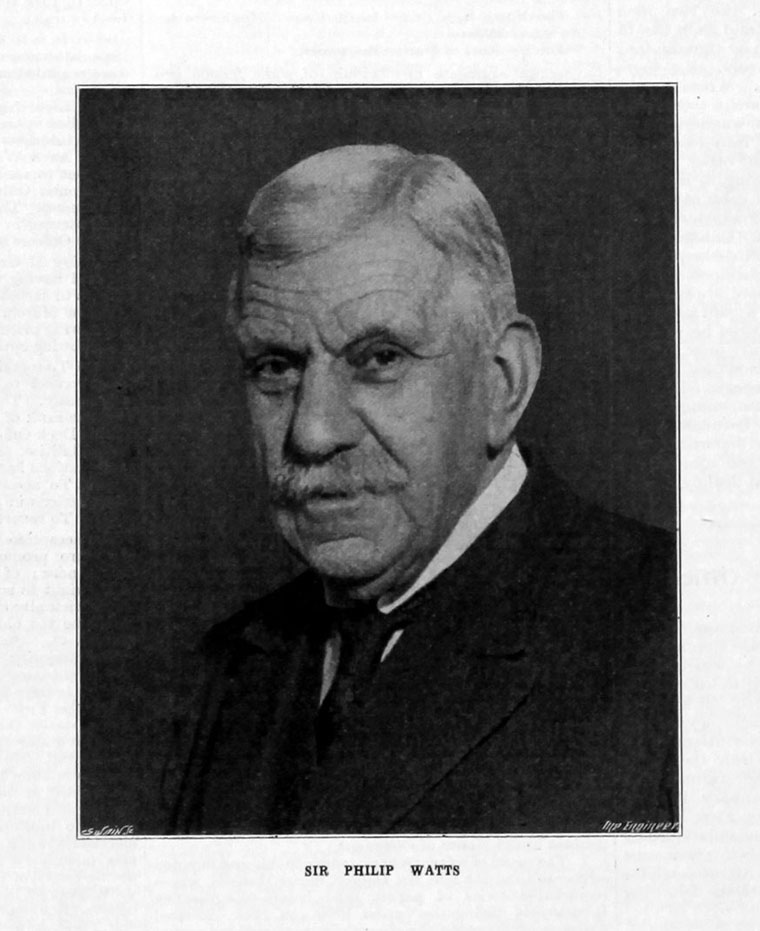 Sir Philip Watts (1846-1926), KCB, FRS, was a British naval architect, famous for his design of the revolutionary Elswick cruiser and HMS Dreadnought.

Educated at the Dockyard School in Portsmouth and the Royal School of Naval Architecture in South Kensington, London.

Watts became a constructor to the Admiralty from 1870 to 1885, and reached the rank of Chief constructor.

From 1885 to 1901 he was director of the War Shipping department of Armstrong, Whitworth and Co. at Elswick (subsequently returning as a director of the company in 1912); but in 1902 he was appointed Director of Naval Construction at the Admiralty. This post he held until 1912, when he was succeeded by Sir Eustace Tennyson d'Eyncourt and became Adviser to the Admiralty on Naval Construction. In this capacity he played an important part when the World War I came.

Being the designer of the first Dreadnought-class battleship, it was now up to him to see the use that was made of the fleet which he had brought into being in previous years. He was a member of the royal commission on the Supply and Storage of Liquid Fuel (1912).

Watts was a keen volunteer, and a commanding officer of the 1st Northumberland Artillery Volunteers.

1926 March 15th. Died and is buried in Brompton Cemetery.

"A very distinguished member has been removed from the ranks of the naval architects by the death of Sir Philip Watts, which took place, as the result of an attack of pneumonia, at his home in London on Monday last. Sir Philip was born on May 30th, 1846, so that he was within a few months of completing his eightieth year.

Philip Watts was the son of the late Mr. John Watts of Southsea, who was chief assistant of Mr. John Fincham, a famous builder of warships, then Master Shipwright at Portsmouth Dockyard. Shipbuilding was in the blood of the Watts family. For generations before he was born Philip's forebears had been master craftsmen in ship construction, and there is no cause for wonder that the boy should have chosen to follow in their footsteps." Read More.

SIR PHILIP WATTS, K.C.B., F.R.S., was born on 30th May 1846, being the son of the late Mr. John Watts, of Southsea, who was chief assistant to Mr. John Fincham, Master Shipwright of Portsmouth Dockyard; and after receiving his early education at private schools, continued his scholastic training at the Portsmouth Dockyard School.

In 1860 he entered the Dockyard as shipwright apprentice, and on completing his term he was sent as an Admiralty pupil to the newly established Royal School of Naval Architects and Naval Engineers at South Kensington, where he studied for several years.

In 1870, when 24 years of age, he left the school with the title of "Fellow" and became associated with the late Mr. William Froude in carrying out experimental work for the Admiralty.

Two years later he was transferred to the Construction Branch of the Admiralty, and during the ensuing twelve years he held various positions connected with the design and construction of warships, being advanced during the last two years of that period to the rank of Constructor and specially attached to Chatham Dockyard.

In 1885 he left the Government service and was appointed naval architect and general manager of the Elswick Shipyard of Messrs. Sir W. G. Armstrong and Co., a position just vacated by Sir William White who had been transferred to the Admiralty as Director of Naval Construction. The responsibilities of the Elswick position were successfully borne by Mr. Watts for nearly sixteen years, and during that period, when Warship design was in a most active state of change and development, the vessels turned out under his care and management steadily enhanced his reputation as a sound and skilful designer. Ships embodying his views were supplied to many navies—British and foreign—amongst them being some famous cruisers for the Japanese Government.

In 1902, Sir William White found himself forced by failing health to retire from the post of Director of Naval Construction to the British Admiralty, and the Government selected Mr. Watts as his successor in this most responsible position. He entered upon his new duties on 1st February 1902, which he carried out until 1st August 1912. The details of his work during those ten years would be practically a history of the British Navy, and it must suffice to state that in this important phase of his career he upheld his high reputation.

Lord Fisher's appointment in 1904 as First Sea Lord marked the advent of fresh warship policy, and as the result of the findings of the Committee of Experts appointed at that time, he was instructed to design the battleship "Dreadnought" and the battle-cruiser "Indomitable". How he carried out these instructions may perhaps best be summarized by stating that he succeeded in producing two war-vessels which were epoch-making in that they revolutionized in many important points any vessel previously launched. The "Dreadnought" was commissioned in 1906 and the "Indomitable" in 1908, and these were only two of the many and remarkable war-vessels designed by him.

Sir Philip retired from the Admiralty on 1st August 1912, but continued in a consultant capacity until early in 1916. Afterwards he took up private practice, and became a director of Sir W. G. Armstrong and Co., Ltd. He was made K.C.B. in 1905. He was a Fellow of the Royal Society, of which body he was at one time a Member of Council and a Vice-President. He was also a Member of the Institution of Civil Engineers, the Institution of Naval Architects, and the Society of Nautical Research. He was for some time Chairman of the Federation of Shipbuilders.

He became a Member of this Institution in 1902.

His death occurred in London on 5th March 1926.

Born at Portsmouth May 30, 1846, son of John Watts, a principal Constructive Officer at Portsmouth Dockyard, he was apprenticed in 1860 as a shipwright at the Dockyard, and attended the Dockyard School for instruction in mathematics and physical science, making such progress as to be selected for the Superior Course in Naval Architecture.

He was selected in 1866 for a course at the Royal School of Naval Architecture, South Kensington, and was appointed in 1870 as Admiralty Overseer on some of H.M. ships then building by contract. Afterwards he assisted William Froude for two years in connection with model experiments. Later he was appointed to be Assistant Constructor at Pembroke; then he returned to the Admiralty to organize a "calculating section" of the Design Department. The design of the special vessel Polyphemus owed much to him.

Appointed Constructor at Chatham he remained there until 1885, when he retired from the Admiralty to take up the position of General Manager and Chief Naval Architect to Sir W. G. Armstrong, Whitworth & Co., Ltd., which position he held until 1902. During this time he designed and built various types of war vessels for many foreign navies, some of which were epoch-making vessels — e.g. the Piemonte for the Italian Government, which was at that time the fastest and most heavily armed cruiser of the day.

In 1902 he succeeded Sir William White as Director of Naval Construction at the Admiralty, and in 1905 as a result of his labours the Dreadnought was evolved, and the first of this class laid down with ten 12-in. guns mounted in pairs in five barbettes. In this year he was created a Knight Commander of the Bath. Sir Philip retired from the post of Director of Naval Construction in 1912.

He rejoined his old firm, Sir W. G. Armstrong, Whitworth & Co., Ltd., as Director, and remained in it until his death. He contributed many valuable papers to the Transactions of the Institution of Naval Architects, of which he was an Honorary Vice-President. He was connected with many and varied technical institutions, and up to the time of his death was keenly interested in the restoration of the Victory to her 1805 condition, being Chairman of the Restoration Committee. He was also Commanding Officer of the 1st Northumberland Brigade, R.F.A. (T.).

Sir Philip Watts was elected a Member of the Institute on March 17, 1914.