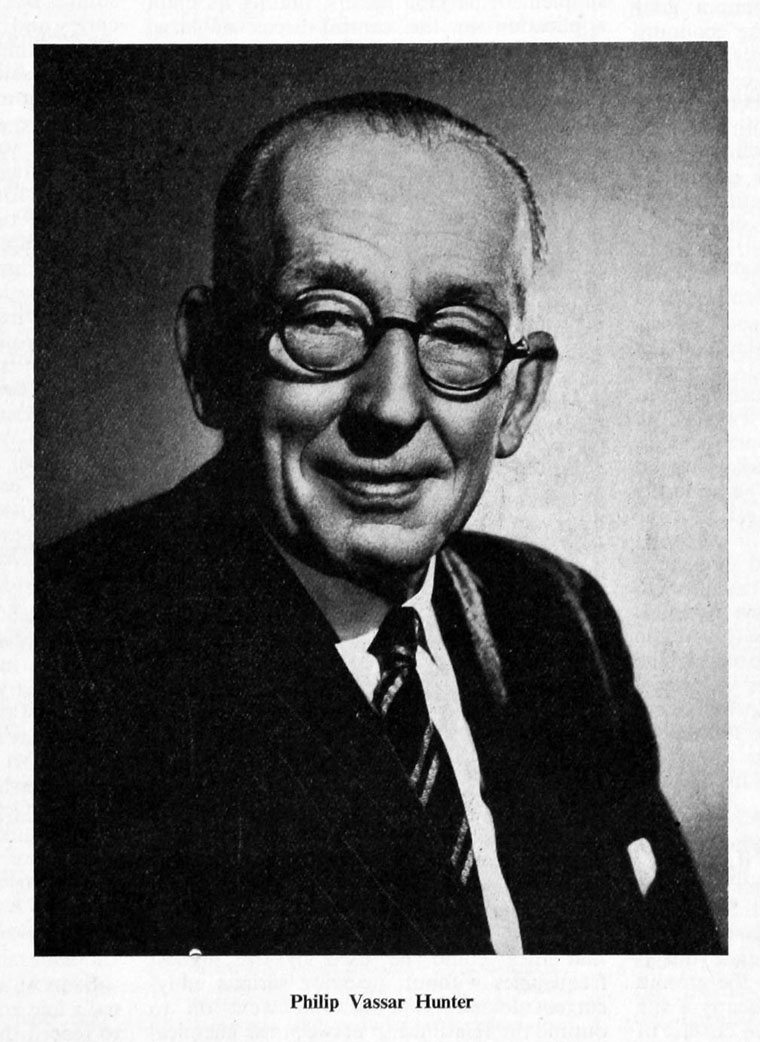 Philip Vassar Hunter CBE (c1883-1956) of BICC was a British engineer and businessman.

Born in 1883 in Emneth Hungate, Norfolk, he attended Wisbech Grammar School and was later educated at Faraday House, an engineering college in Charing Cross, London.

During the First World War he was the Engineering Director in the experiments and research section of the anti-submarine division of the Naval Staff and was awarded the CBE in January 1920.

In the Second World War he invented the buoyant cable which contributed to the defeat of the magnetic mine.

In 1933 he was president of the Institution of Electrical Engineers of which he became on honorary fellow in 1951 for "outstanding service to the electrical industry and to the institution".

He was president of the British Ice Hockey Association from 1934 to 1958 and was responsible for hiring John F "Bunny" Ahearne in 1934 as the Manager of the Great Britain national ice hockey team which went on to win the gold medal at the 1936 Winter Olympics.

IN last week's issue we briefly recorded the death, on October 22nd, at "Springburst," Shirley Church Road, Addington, Surrey, of Mr. P. V. Hunter, who was a leading personality in the electrical industry and made many outstanding contributions to cable development.

Philip Vassar Hunter was born at Hungate, Norfolk, in 1883 and was educated first at Wisbech Grammar School and then at Faraday House, where he obtained an honours diploma. The "sandwich system" at Faraday House provided the start of his practical training with the Rugby firm of Willans and Robinson. Further practical experience was gained with the electricity supply undertakings at Great Yarmouth and at Willesden.

Then for a time he worked as assistant to Robert Hammond, the consulting engineer.

In 1904 he joined Messrs Merz and McLellan and so began an association which lasted for fifteen years and brought him into contact first with power station development and then with railway electrification in various parts of the world. He was concerned, for example, with the design of the Carville and Dunston power stations and with several generating stations, using waste heat, in the North East of England. Still with Messrs. Merz and McLellan, he worked on the electrification of the Central Argentine Railway, the Buenos Aires Western Railway and the Melbourne Suburban Railways.

From 1909 to 1919 Mr. Hunter was head of the firm's electrical department, but in 1917 his services were placed at the disposal of the Admiralty and he was appointed engineering director of the Experiments and Research Section of the Anti-Submarine Division. There he collaborated with Admiral W. W. Fisher and Sir William Bragg on a three-man committee which was formed to guide the work done by the Admiralty on the development of methods of detecting, locating and destroying submarines. The best known and by far the most fruitful product of this association was the familiar "Asdic."

Another interesting device was the "leader gear," which provided an electromagnetic system whereby ships could be navigated above and along the route of a cable laid on the sea bed. These and other services rendered by Mr. Hunter during the war earned him the award of the C.B.E. in 1920.

During the 1939-45 war he was concerned with the development of special electrical equipment for war purposes and his outstanding achievement was the invention of the fundamental buoyant cable for the destruction of magnetic mines.

In 1919 he was appointed joint manager and chief engineer of Callender's Cable and Construction Company, Ltd., and in 1937 he became a director of the company. For much of this period he was concerned with research and development work on electrical transmission with particular reference to protective systems and cables. He was responsible for the invention of the split-conductor system and the four-conductor system two methods of providing automatic protection for cables.

His presidential address to the Institution of Electrical Engineers in 1933 contained an authoritative appreciation of the cable maker's art and of the prospects for its future development. At that time the solid impregnated paper had for practical purposes reached the peak of its development and, for cables to operate at higher service voltages, other methods of insulation were being sought. With oil filled cables higher working stresses had proved to be feasible but without any corresponding cheapening of the cost of the cable as laid. In the search for further lines of advance increasing attention was being given to methods of placing the dielectric under compression. Indeed, as Mr. Hunter suggested in his address, the development of power cables was about to enter a new phase in which inert gases under pressure were to be used to apply pressure to the paper dielectric and thus to increase its electric strength. In one variant of this idea the gas was to be used as both the impregnating and the pressure medium.

There followed a period of intensive work in which these variations were developed and embodied in new high-voltage cables which were installed in various parts of the world. The latest example, a group of five single-core 138kV gas-pressure submarine power cables, providing a three-phase link (with two spare cores) between Vancouver Island and the mainland of British Columbia, was completed and commissioned a month ago as recorded in our pages last week, Mr. Hunter will be remembered not only for his own direct contributions to cable design but for the unique collection of historical power cables (the Hunter-Hazell collection) which he built up with the help of Mr. J. T. Hazell, who was for many years his personal assistant. This collection which is now in the Science Museum at South Kensington, originated at the time when Mr. Hunter was gathering material for his I.E.E. presidential address in 1933; it soon became clear that many examples of old cables of historic interest would be lost to posterity unless the effort was made to acquire, preserve and catalogue them. So began the task of building the collection of interesting cables and later of writing a book, The Development of Power Cables, in which the results of this patient research work can be seen in perspective.

Mr. Hunter's interest in research was well exemplified in the Callender's research laboratory which he was responsible for establishing at Wood Lane in 1934.

After the merger which resulted in the formation of British Insulated Callender's Cables, Ltd., he became engineer-in-chief of the new company in 1946, and deputy chairman from 1948 to 1952. He served on the boards of many of the companies in the B.I.C.C. group and was chairman of nine of them, including The British Insulated CaJlender's Construction Company, Ltd., and British Telecommunications Research, Ltd.

A memorial Service will be held at St. Margaret's, Westminster, on Thursday, November 8th, at 2. 15 p.m. The service will be conducted by the Rev. Dr. E. G. Jay and the address will be given by the Rev. C. L. Creswell, C.V.O., chaplain to the Council of the Institution of Electrical Engineers.