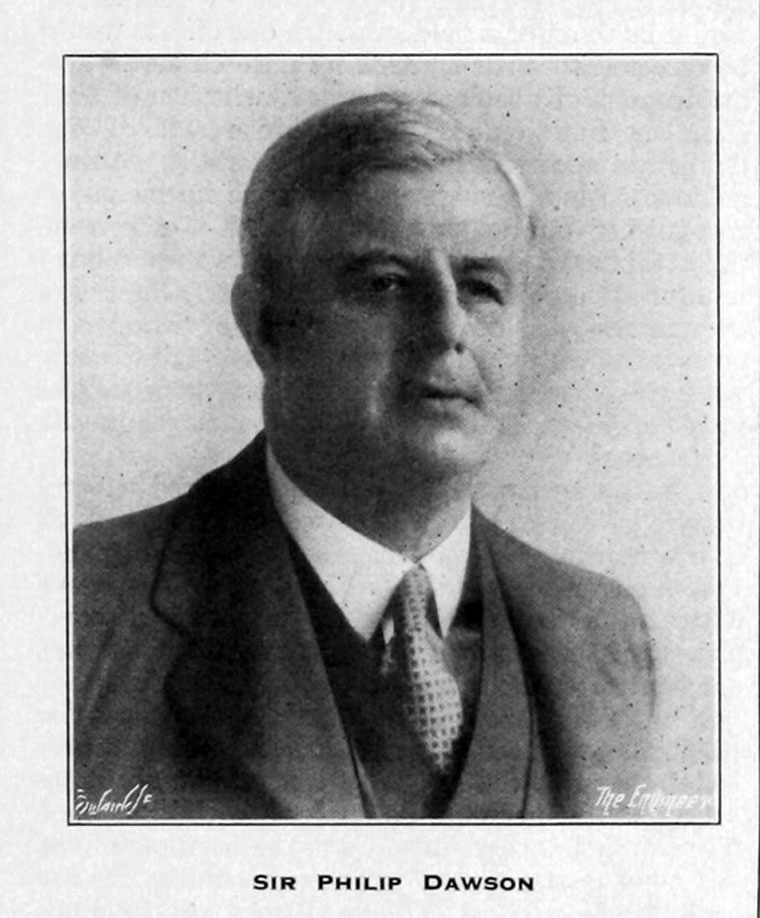 Engineer involved in the electrification of railways.

Sir PHILIP DAWSON, M.P., won a great reputation for himself as an authority on electric traction. He was born in 1866 and received his education from 1885 to 1891 at the Universities of Ghent and Liege, Belgium.

He then joined the late Anthony Reckenzaun and was engaged on designs and constructional work for electric traction undertakings, and represented Mr. Reckenzaun for six months at the Leeds works of Messrs. Greenwood and Batley, Ltd. In 1893 he joined Messrs. Robert W. Blackwell, of Westminster, and designed electrical power and traction plants for Bristol, Guernsey, Dublin, and several South African municipalities.

He went to America in the following year to study the development of electric traction there. During the next eight years he travelled very extensively in connection with contracts for electric tramways and suburban railways in Europe and America; in addition he lectured to technical colleges and contributed numerous articles on this subject to the technical press. He also wrote a textbook on the subject. In 1898 he presented a paper to the Institution on "Mechanical Features of Electric Traction". Subsequently he became a partner in the firm of Messrs. Kincaid, Waller, Manville and Dawson, consulting engineers, and was also consulting engineer to the London, Brighton and South Coast Railway for the early suburban railway electrification scheme of 1908.

He had remarkable gifts as a linguist and this ability was of great service to his firm in connection with contracts on the Continent. During the War he was a member of the Disposals Board of the Ministry of Munitions from its inception, and he also served on the Railway Electrification Advisory Committee of the Ministry of Transport, and on the Water Power Resources Committee of the Board of Trade. In 1919 he was created Chevalier de l'Ordre de Leopold by King Albert for technical services to Belgium during the War, and in 1920 he received his Knighthood.

When a Parliamentary by-election was caused in West Lewisham in 1921 by the death of Sir Edward Coates, Sir Philip was persuaded to become Conservative candidate; and at this and subsequent elections he was returned with large majorities. He continued to represent this constituency until his death, which occurred on 24th September 1938, in, Berlin, during his return from the Inter-Parliamentary Business Congress in Warsaw. One of his last political activities was his work as chairman of the Anglo-Italian Parliamentary Committee, formed to promote friendship with Italy.

"...Sir Philip Dawson, on Saturday last, at the age of Seventy-one, removes from the engineering profession a well-known figure, closely identified for many years with the electrification of railways. His work in this connection in the days when the subject was being widely discussed, and when there was much diversity of opinion as to the best system to adopt for long distances, will be remembered by many..."More.