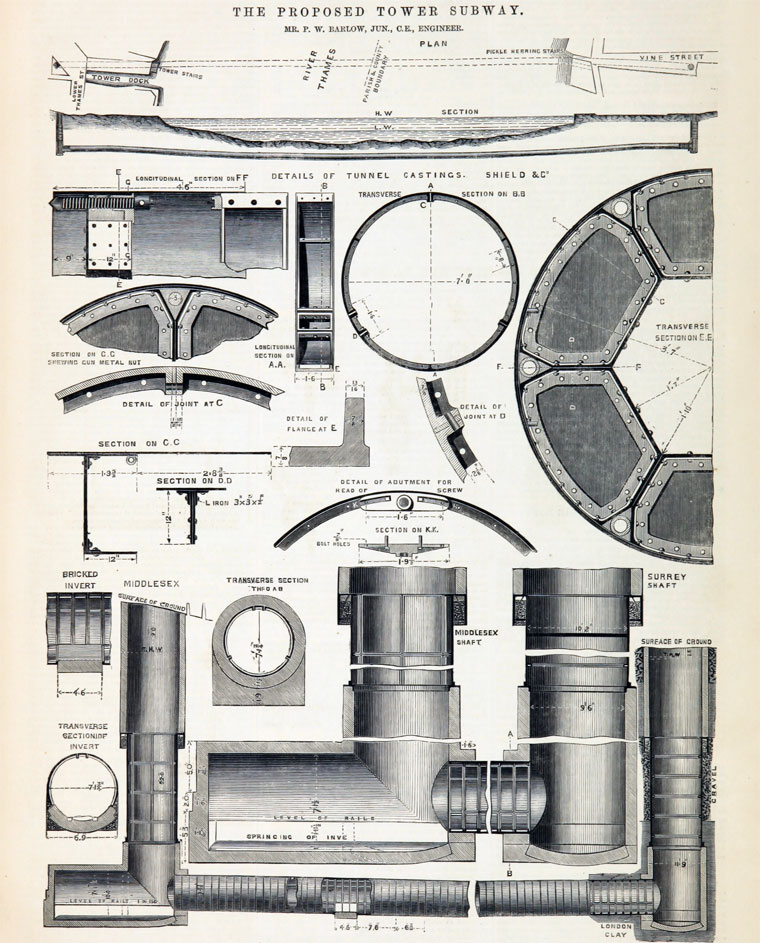 1809 February 1st. Born at Woolwich, the son of an engineer and mathematician, Professor Peter Barlow of the Royal Military Academy, Woolwich. His brother William Henry Barlow was a noted 19th century railway engineer.

1826 Peter William Barlow, became an Associate member of the Institution of Civil Engineers.[1]

1836 Married Bethia Crawford Caffin, on 5 July. They had two daughters, and one son, also called Peter William Barlow, who became a builder.

He is particularly associated with bridges (he designed the first Lambeth Bridge, a crossing of the River Thames in London), the design of tunnels and the development of tunnelling techniques, namely his patent in 1864 for the cylindrical tunnelling shield. This was an improvement upon the original tunnelling shield designed and patented by Marc Isambard Brunel in 1818. The shield prevented the newly dug tunnel from collapsing before it could be lined with cast-iron segments. In 1868 the patent was modified to include a diaphragm with a door, which would help facilitate the application of compressed air to tunnelling.

While designing the piers of Lambeth Bridge (a suspension bridge design since replaced by the current structure) in 1862, Peter W. Barlow experimented with driving iron cylinders into the clay upon which much of central and north London sits. It was this experience that prepared him to work with Greathead on the development of a tunnelling shield to dig the Tower Subway in 1870 to serve a cable railway. The tunnel was soon converted to pedestrian use. Barlow was engineer for the project, and his assistant, James Henry Greathead, who had joined his staff in 1864, helped design the shield and supervised the construction. The success of the construction method paved the way for the development of tube railways over the next thirty years.

... The Lambeth Bridge and the Tower Subway were the two latest public works executed by Mr. Barlow....

... Mr. Barlow became a Fellow of the Royal Society in 1854. He joined the Institution of Civil Engineers in 1827, and at the time of his death was the oldest member of the Institution.