Grace's Guide is the leading source of historical information on industry and manufacturing in Britain. This web publication contains 140,742 pages of information and 227,385 images on early companies, their products and the people who designed and built them. 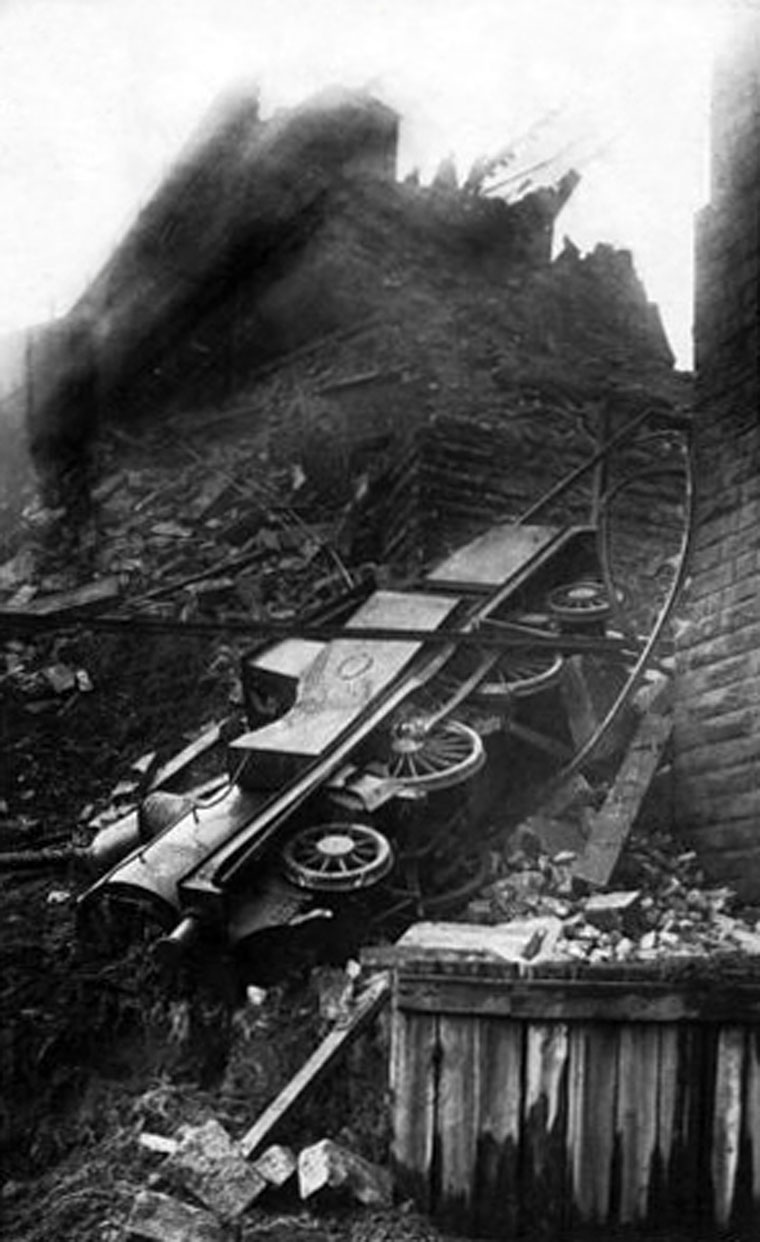 Penistone Railway, Yorkshire has been the site of many accidents in the late 19th and early 20th century.

1845: On the evening of 6 October, shortly after leaving Dunford Bridge the Sheffield bound train struck a cow. The impact caused the locomotive and carriages to derail and the cow was killed instantly. None of the passengers suffered any injuries other than some minor bruising, although the guard was more severely injured. A replacement train was dispatched from Sheffield and the passengers all completed their journey by two o'clock the following morning.[1]

1884 A railway accident that took place at Penistone, near Sheffield, on the 16th July 1884 - often referred to as the Bullhouse Bride Accident. The locomotive was 4-4-0 No. 434, built at Gorton Locomotive Works.[2]

"A DISASTROUS accident occurred near Penistone, on the Manchester, Sheffield, and Lincolnshire Railway, on Wednesday week. The exact. site of the calamity is close to Bullhouse Colliery. The train, consisting of nine coaches and a horse-box, left Manchester for London at 12.30, and was due at King's-cross at 5.20. The range of hills separating Manchester from Sheffield was safely surmounted, the Woodhead Tunnel was traversed, and the train, then 01~ a falling gradient, was travelling at a speed variously estimated at 37 1/2 miles and 60 miles an hour when the crank axle of the four-coupled bogie engine broke. The engine and tender and the horse-box remained on the road, but the coupling between the horse-box and the next vehicle broke. The train then left the track. Some of the coaches ran down the embankment, while others fell over a bridge into the road beneath. Nineteen passengers were killed on the spot, or died within an hour or two, and others have since succumbed to their injuries. We add with special regret that Mr. Massey Bromley was among those slain. He was the last man extricated from the wreck. The coach in which he had been travelling had fallen into the highway. He appeared to have been killed without pain by a blow on the head. None of his limbs were broken; nor did be bear any marks save a bruise on the side of his face and on the temple. Thus died at the age of thirty-seven a talented member of our profession.....[3]

1889 30th March - The locomotive was Class 23 No. 188, a six-coupled locomotive, which was usually to be found on goods workings, but was regularly used on excursion traffic. This was the say of the D.A. Cup Final, Preston North End and the Macnchester, Sheffield and Lincolnshire Railway rain an excursion with portions from Liverpool, Southport and Wigan to London, Kings Cross and many from Lancashire took advantage of it to watch Preston play. The train ran down the gradient towards Penistone station when the locomotive, having no leading wheels to guide it, jumped the points where the goods line diverged from the main line on the approach to the Huddersfield Junction signal box. The locomotive crew applied the brakes. The coaches followed the locomotive into the "six-foot" ripping up some 25 yards of track. The tender capsized and became entangled in signal wires, the locomotive dug into the ballast and the front coach was totally smashed. Coaches two and three toppled onto their sides and the following three which were pulled round in different directions were left standing broadside against the first pair. One person was killed and many injured.[4]

A further crash was averted by the prompt action of the signalman in Huddersfield Junction box. The Railway Inspectorate found that the leading axle of the locomotive had fractured and questioned both the use of a "goods locomotive" on passenger work, where they would travel at higher speeds than usual, and the locomotive having no leading bogie wheels.[5]

" IN his report to The Board of Trade on the Penistone railway accident, on the 30th of March last, Major-General Hutchinson states what was regarded as a foregone conclusion. He has found that the accident was caused by the fracture of the leading axle of the engine of the excursion train, resulting in the break-up of the front of that train, the collision being due to the tender thereby falling foul of the down line, about sixty yards inside the Huddersfield Junction down home signal, just before the engine of the down mail train reached the down distant signal of that junction. The inspector adds that this accident again raises the important question of bow many mill's axles should be allowed to be run, before being submitted to an exhaustive examination as to the existence of flaws. He regards this as a question to be settled by a conference of the locomotive superintendents of the various railways, and he thinks it would be attended with great public advantage if these gentlemen would undertake this important duty."[6]

1886 - 1st September - The MS&LR locomotive and the leading brake backed onto its train, the impact sending the six coaches, dining car and rear brake into the ticket platform. Twenty passengers were slightly injured.[7]

1887 Almost an identical accident to the last.

1897 -10th October - An accident at Penistone station when a light locomotive collided with a carriage.[8]