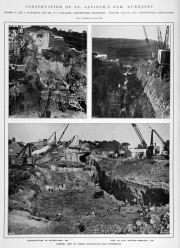 1847 Contractor for the Woodhead Tunnel 2

1852 Pauling and Sharp was put into bankruptcy

1853 Bankrupt. 'Notice is hereby given, that William Thomas Jemmett, Esq. one of the Commissioners of Her Majesty's Court of Bankruptcy at Manchester, acting in the prosecution of a Petition for adjudication of Bankruptcy, filed on the 21st day of September, 1852, against George Clarke Pauling and Robert Chapman Sharp, both of Manchester, in the county of Lancaster, Merchants and Contractors for Public Works, Dealers, Chapmen, and Copartners, trading under the style or firm of Pauling and Company, did, on the 10th day of January 1853, allow Robert Chapman Sharp, one of the said bankrupts, a Certificate of conformity of the first class; and that such Certificate will be delivered to the said bankrupt, unless an appeal be duly entered against the judgment of such Court, and notice thereof be given to the Court. [1]

1890s Baron E. d'Erlanger, in conjunction with George and Harry Pauling, agreed with Cecil Rhodes to finance and build the Rhodesian railway system[2]

1894 Pauling and Co had been contractors for the first 5 miles of the railway of the Syrian Ottoman Co, which then became bankrupt[3]

1897 Contractors for the Bechuanaland Railway Co[4]

1898 Contractors for the Mashonaland Railway Co[5]

1901 Contractors for the Wankie Railway (in Rhodesia)[8]

1909 Contracted to build a section of the Rhodesia-Katanga Junction line, under the direction of George Pauling[9]

1947 Involved in the ground nut scheme in East Africa[17]

1959 Constructed the new London embassy for the American government[18]