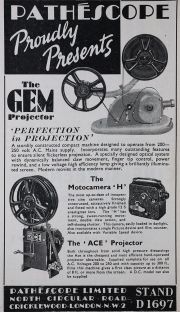 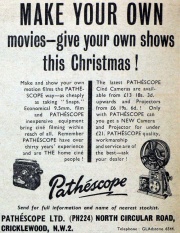 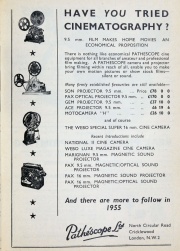 Pre-WWII. In Britain, 9.5 mm film, projectors and cameras were distributed by Pathescope Ltd. During the years leading up to the Second World War, (and for some years after the war), the gauge was used by enthusiasts who wanted to make home movies and to show commercially made films at home. Pathescope produced a large number of home versions of significant films, including Mickey Mouse and Betty Boop cartoons, classic features such as Alfred Hitchcock's Blackmail,and comedies by such well-known stars as Laurel and Hardy and Harold Lloyd. A notable element in the Pathescope catalogue were pre-war German mountain films.

Film for home cinematography was usually supplied in rolls 30 feet long and enclosed in a "charger" or magazine. The most popular film was panchromatic black and white, but Kodachrome became available after some years, and Pathescope Colour Film (actually made by Ferranicolour) was introduced in the 1950s.

A number of cameras and projectors were produced, the more successful including the Pathescope "H" camera and "Gem" projector. Films were also produced with an optical sound track for showing on projectors such as the Son.

Post-WWII. After the war, the 9.5 mm gauge suffered strong competition from Kodak's 8 mm film, (which was introduced in 1936).

1960s Pathescope was struggling to hold its place in the market. The company introduced the well made Prince 9.5 mm camera and Princess projector in the early 1960s, but the gauge was already doomed as a popular format.

1960 October. The company went into receivership and in 1961 was taken over by Great Universal Stores and became Pathescope (London)

1963 Pathescope Ltd was in members' liquidation[2]

By 1964 the sales of 9.5mm items was discontinued, but the brand name Pathescope was used by Great Universal Stores for many of their mail order catalogue photographic items.