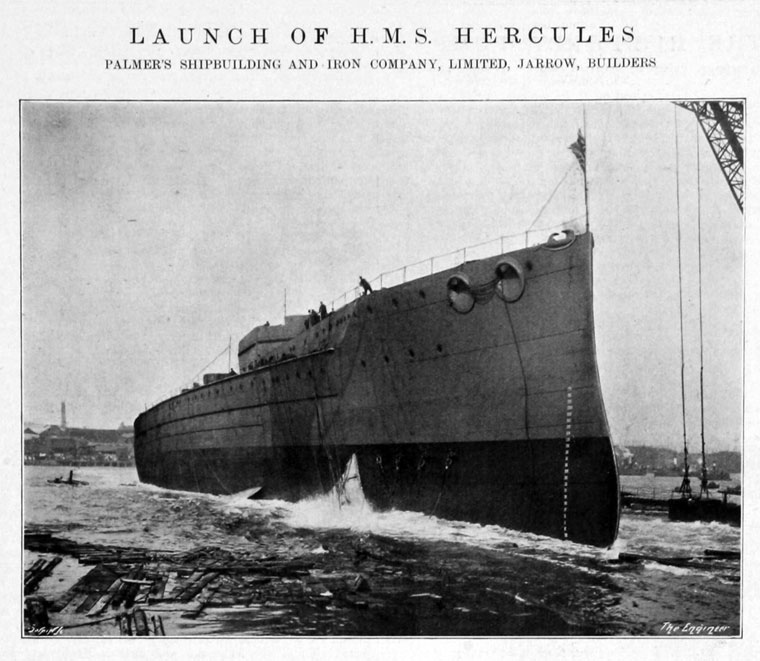 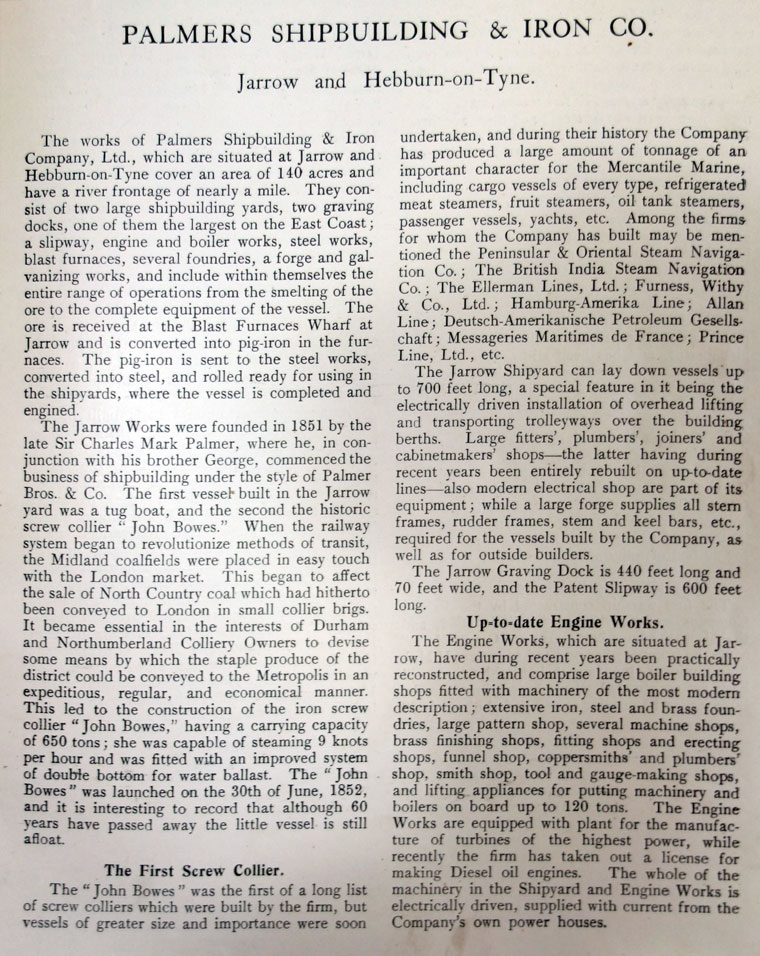 Based in Jarrow, the company also had operations in Hebburn on the River Tyne. The latter yard was later absorbed by Vickers-Armstrongs and formed into Palmers Hebburn Co, a ship repair establishment with the largest graving dock in the North East of England. [1]

1852 The company was established by Charles Mark Palmer and his elder brother George Robert Palmer. They were the sons of George Palmer, a prosperous South Shields businessman and ship-owner. Charles initially worked for his father before establishing his own shipyard at Jarrow. The land for the yard was leased from Mr Carr-Ellison of Hebburn in order to build steam colliers to ship coal to London. [2]

1852 Palmers' first sea-going screw collier – the John Bowes - was launched on 30th June; this was the yard’s second ship. It had a very long life under the Spanish flag before foundering as Villa Selgas in 1933. The Yard built 25 colliers of 12,210 grt in the two years following the launch of John Bowes

1853 Palmer started an engineering side to the business to build engines for his vessels.

1854 The first rolled armour plates were produced for warships.

1856 The Yard was a major builder of warships for the Royal Navy manufacturing 20 warships plus many small torpedo boat destroyers.

1860 Output increased to 22,000 tons. Charles Palmer purchased 14 collieries to safeguard his coal supply, leased land in North Yorkshire and set up the Grindle Park Mining Company in order to mine it. He also built a harbour at Port Mulgrave near Staithes to ship the ore back to Jarrow.

1860 A yard was purchased at Howden-on-Tyne, where the firm built cargo vessels, oil tankers (probably the first yard to do so), and passenger ships. The Howden Yard was used for a high percentage of the total output of the company.

1861 Palmer secured a contract from the Italian Government to build mail steamers.

1863 In August, Charles Mark Palmer launched four ships, one better than the triple launch of Charles Mitchell in 1856 at Low Walker.

Between 1863 and 1873 Palmer played an important part in establishing the National Line along with Thomas Ismay, owner of the White Star Line.

1865 The company was established[3]. Palmers Shipbuilding and Iron Co. Ltd was incorporated as a limited liability company. Manchester interests held most of the shares with Palmer as Chairman and Managing Director.

1870 Charles Palmer built Palmers Memorial Hospital for the exclusive use of shipyard employees. A bronze statue of him was placed in the hospital grounds in 1903 following his death. It was then moved to the river-front at Jarrow where it can still be seen today.

1872 First use of double bottoms for water ballast in Vaderland, Nederland and Switzerland built between 1872 and 1874 for carrying oil.

1874 Charles Mark Palmer was elected M.P. for North Durham and made Mayor in 1875. George retired from the business and Charles carried on.

1884 Five sailing ships were built along with a number of tramps, coastal steamers and coastal liners.

1886 Tankers figured prominently in the yard output. Up to 1906 the yard had the second highest output in the North East.

1889 Hall Brothers paid tribute to Sir Charles Mark Palmer by naming their last tramp built by him as Lady Palmer completed in October 1889.

1894 Antwerp Exhibition. Details of their exhibits including a model of a triple-expansion engine of 1,100 hp. Awarded Diploma of Honour in the metallurgy section. [6] [7] [8]

1898 'BURIED IN MOLTEN IRON. A labourer named John Meakin has met with a horrible death at Palmer’s Works. Jarrow-on-Tyne. He was assisting in the tipping of slag when the crust of one of the slag balls burst, and he was enveloped in the burning liquid. His struggles only lasted a few seconds, and the slag stiffening formed a casing around him.'[9]

c.1902 Christopher Furness acquired the interests of Sir Charles Mark Palmer in Palmers Shipbuilding and Iron Co (Limited) and was appointed chairman. Acquired for Palmers a lease, with an option of purchase, of the new graving dock at Hebburn-on-Tyne belonging to Robert Stephenson and Co (Limited).

1906 Electric overhead trolley cranes on elliptical-shaped gantries were introduced on the berths. The production of tramps and cargo-liners was speeded up.

1911 The seven-berth shipyard of Robert Stephenson and Co at Hebburn was leased in 1911 together with their 715 foot dry dock.

1914 Shipbuilders, Marine Engineers and Manufacturers of Steel and Iron. [10]

WWI the yard made one battleship, one cruiser, three monitors and two submarines. The Company purchased the small yard of the Amble Shipbuilding Co. Ltd at Amble, Northumberland during the War

After the War the Company started to manufacture cargo liners with many of these being turbine propelled with turbines built at the Amble Yard.

1922 Early in the year Palmers Shipbuilding and Iron Co decided to form a ship-repairing establishment at Swansea and for that purpose the subsidiary company was formed under the title of Palmers (Swansea) Dry Dock Co.[12]

1923 The large British cable-layer CS Faraday was completed in April having been launched in February. However tankers predominated in the post WW1 years with over fifty being made between 1921 and 1930.

1926 The oil tanker British Inventor was handed over to the British Tanker Co following successful trials.[14]

1927 April: The Palmer Shipbuilding Company at Jarrow-on-Tyne restarted two of its five blast-furnaces. The whole plant had been idle since the miners' strike in 1921, except that two furnaces worked for four months in 1923.[15]

1927 The first bracket-less tanker designed by Sir Joseph Isherwood, the Beaconstreet was completed in July. It had a triple expansion steam engine.

1928 The largest warship built after WW1, the 8” gun cruiser HMS York was launched on 17th July by the Queen Mother. It was later sunk by German dive-bombers during the invasion of Crete.

1930 The tanker Peter Hurll was the thousandth ship launched by Palmers on 24th July.

1931 The last merchant ship built at the yard was the tanker British Strength completed on 28th April.

1933 The complete closure of the shipyard, engine works, blast furnaces and rolling mills had a devastating impact on Jarrow as the yard had been the main employer. The yard was rescued for a further 18 months thanks to the efforts of Sir John Jarvis, High Sheriff of Surrey.

1935 The Palmer Shipyard was acquired by National Shipbuilders Security Ltd in 1933 and demolished in 1935.

The Hebburn dry-dock was taken over by Vickers-Armstrongs and continued to trade as Palmers (Hebburn).

1867 'NEW IRON BRIDGE FOR INDIA.
Yesterday the first span of a large wrought-iron railway bridge was successfully tested at the Messrs. Palmer & Co's yard at Howdon. The Howdon yard of the Messrs. Palmer was exclusively used for shipbuilding purposes until the great depression in iron shipbuilding occurred last year. Seeing no prospect of obtaining orders for vessels sufficient to keep the Jarrow and Howdon yards going, the firm for a while closed the latter. Towards the close of year, however, the Messrs. Palmer obtained a contract to build two large wrought iron bridges for the East Indian Company, in order to execute which they laid down a quantity of very powerful and valuable machinery and plant at the high end of the yard, thus leaving the lower portion available for the erection of iron ships as usual. Passengers up and down the river may have noticed during the past few weeks the gradual erection of colossal and handsome looking iron structure in the high part of Howdon yard. This was the first span of the two new bridges which the Messrs. Palmer are constructing. The bridges are intended to span the rivers Hullohur and Keeol, which are crossed by the railway running between Calcutta and Delhi, and known as the East Indian Railway. The railway was constructed some years ago as a single line, but the traffic opened out by the district has so rapidly developed that it has been found necessary to lay down an additional line along the whole route. The rivers crossed by the East Indian Railway are all bridged by structures similar to those now being manufactured on the Tyne. The first span of the new bridges was completed on Wedneaday, and yesterday was subjected to the severe test of 820 tons of pig iron, which was laid in even quantities along the roadway of the bridge. The bridges are of the description known as the lattice girder bridge, with top and bottom booms constructed of plates and angle iron — the booms are trough shaped, and are connected together by massive end pillars, with channel-shaped lattice bars between. Each side of the bridge has a double row of lattice bars, those in contraction being on the outside, and those in tension being on the inside of the wall; and in order to add to the strength and steadiness of the lattice work, in addition to being securely rivetted together, the bars are fastened at intervals with strong wrought-iron stays. Each span is built with a camber of 2 1/2 inches, and the railway is carried along the cross girders, which are suspended from the bottom booms by stout angle irons rivetted to the sides of the booms. For the purpose of adding strength and stiffness to the span laterally, a number of arched girders connect the top booms together. The bridge intended to cross tho Hullohur will consist of nine spans, and that for the Keeol of four, making thirteen spans in all. Each span will be of the following dimensions: Extreme length, 162 feet; span between the piers 150 ft. clear: breadth from centre of boom centre of boom, 15 feet; depth of main girders, 14 feet 7 1/2 inches. Each span will contain no less than 150 tons of wrought-iron, so the thirteen spans will absorb 1,900 tons. The foundation plates of each span are of cast iron, with convex and concave surfaces. One end of each span will fixed, while the opposite end will rest upon five rollers, each six inches diameter, made of Bessemer steel. The principle of resting one end of the span upon rollers is to allow for expansion and contraction, and so lessen the strain upon the bridge when heavy weights are passing across. The specimen span, which was yesterday tested, is a fine piece of workmanship, and though of immense strength, has a very light and elegant appearance. The test, though severe, was highly satisfactory, and is another proof of the great and varied capacities of Messrs. Palmer. The span deflected half an inch with its own weight, and with the load of 320 tons on the roadway the deflection was two inches, a result which gave the highest satisfaction to the makers and to the representative of the East Indian Railway Company. The bridge was designed by Mr. Rendel, Great George Street, London, consulting engineer to the Railway Company; and being erected under the supertintendency of Mr. T. Emslie, manager to Messrs. Palmer, and inspected by Mr, J. Thompson, engineer, on behalf of the railway. The testing was carried out by the latter gentleman. It may be interesting to add that the whole of the iron for the bridges is manufactured and rolled by the Messrs. Palmer, Jarrow, and the plates and lattice bars, &c., are drilled by three multiple drilling machines, made by Messrs. Ormerod, Grierson, and Co., Manchester — the largest of which drives 118 drills simultaneously.'[16]