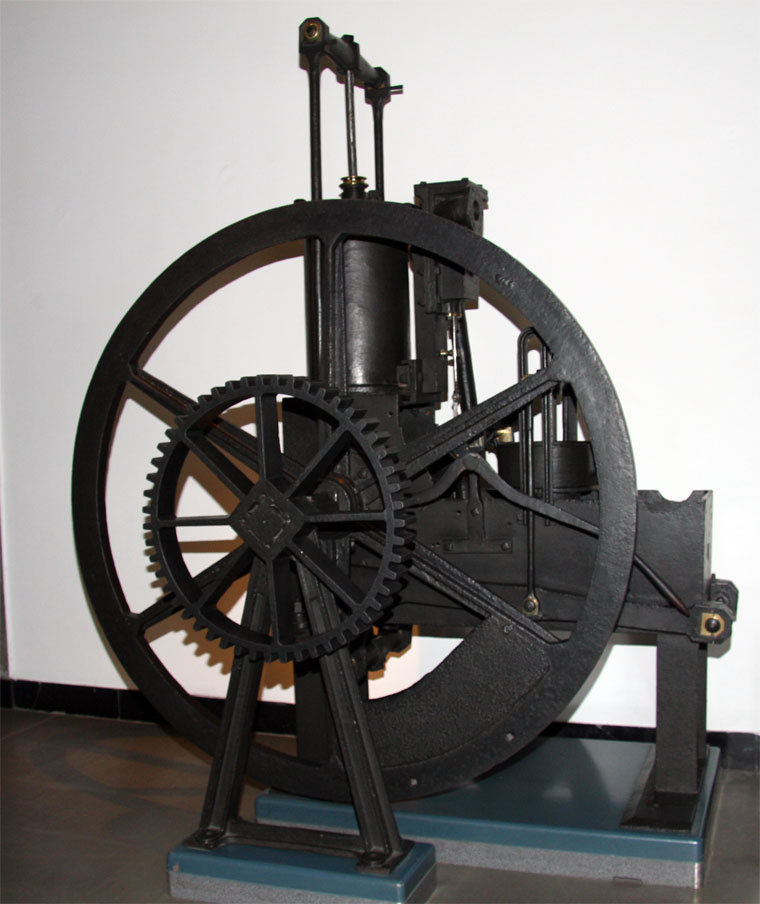 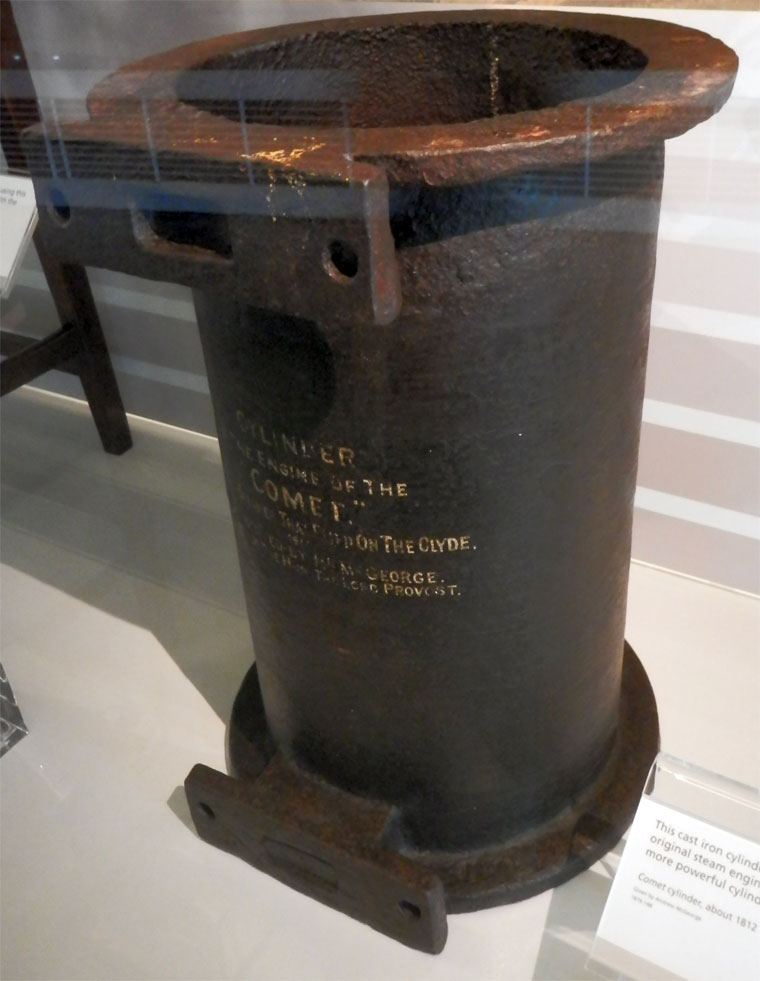 Original cylinder, which proved too small and was replaced by one slightly larger in diameter. Exhibit at the Riverside Museum, Glasgow

Plan and Lines of Comet.

The paddle steamer PS Comet was built for Henry Bell, hotel and baths owner in Helensburgh, and began a passenger service in 1812 on the River Clyde between Glasgow and Greenock, the first commercially successful steamboat service in Europe.

c.1810 Bell, assisted by a Glasgow engineer. John Thomson, began his own practical experiments in steam-powered ships, which he seems to have financed by mortgaging the hotel for £2,000.

1811 Commissioned a hull from John Wood, a shipbuilder in Port Glasgow. The engines were supplied by John Robertson, a Glasgow engineer, and the boiler and funnel by David Napier. (Note: Several sources state the 1812 Comet had ‘engines’ (Plural) – this appears to stem from usage of the time often referring to the boiler as an ‘engine’. Both the 1812 and rebuilt 1819 vessels had a single engine.[2]

The engine was made by John Robertson of Glasgow, and the boiler by David Napier, Camlachlie, Glasgow: a story has it that they were evolved from an experimental little steam engine which Bell installed to pump sea water into the Helensburgh Baths. The 25 feet funnel was about 12 inches in diameter, and a yardarm allowed it to support a sail when there was a following wind.

The engine had a vertical cylinder of 12.5" bore (originally 11" or 11.5") and 16" stroke. The 6 ft diameter flywheel incorporated a balance weight. A slip eccentric arrangement was used for reversing.[3] [4]. The engine is displayed in the London Science Museum. The smaller original is displayed in the Riverside Museum, Glasgow.

In August 1812 Bell advertised in local newspapers: 'THE STEAMBOAT Comet BETWEEN GLASGOW, GREENOCK AND HELENSBURGH FOR PASSENGERS ONLY. The subscriber, having at much expense, fitted up a handsome vessel to ply upon the River Clyde from Glasgow, to sail by the power of air, wind, and steam, intends that the vessel shall leave the Broomielaw on Tuesdays, Thursdays, and Saturdays about mid-day, or such hour thereafter as may answer from the state of the tide, and to leave Greenock on Mondays, Wednesdays, and Fridays in the morning to suit the tide. The fare was "four shillings for the best cabin, and three shillings for the second.'

1812 August 06th With Bell and Robertson on board the Comet made an initial voyage from Port Glasgow (a town just to the east of Greenock) 21 miles upriver to the Broomielaw, Glasgow, then sailed from Glasgow the 24 miles down to Greenock, making five miles an hour against a head. The first voyage with fare-paying passengers was two days later, on 08th August 1812.

1813 May. A report of the success of the ship. '...Mr Henry Bell, of the Helensburgh baths, on the Clyde, constructed a boat, having a small steam engine adapted to it; and so effectually succeed in conveying passengers to Greenock and Helensburgh to their perfect satisfaction...The distance from Glasgow to Greenock by water is 26 miles, which is performed, in all ordinary cases, in four hours, sometimes under three and a half....Mr Bell having arrived at Leith with his steam boat the Comet. After being a few days here, Mr call Bell proposes to proceed to the Tay and afterwards to Newcastle.[5]

The success of this service quickly inspired competition, with services down the Firth of Clyde and the sea lochs to Largs, Rothesay, Campbeltown and Inveraray within four years - the Comet was outclassed by newer, larger and faster steamers. Bell briefly tried a service on the Firth of Forth but this too soon attracted competition and was unsuccessful.

1819 September 02nd. Bell ran a service to Oban and Fort William (via the Crinan Canal)[6] a trip which took four days. ' ‘Mr. Tavlor informs us that this operation was performed at Helensburgh on the beach west of the Baths Hotel, the chief carpenter being certain James Nicol from Cartsdvke, who acted under Bell's own superintendence.’[7]

1820 (c.June) Inaugurated the Glasgow–Inverness route. Comet sailed Glasgow-Fort William, thence by coach to Fort Augustus where the Stirling conveyed passengers by way of the Caledonian Canal to Inverness.[8]

A successor vessel, Comet II, was built but Henry Bell seems to have been its manager, rather than having a financial interest in the vessel.

1822 With Comet II, Henry Bell inaugurated the Glasgow–Inverness steamship route by way of the Caledonian Canal with the Stirling and participated in the ownership of the Highland Chieftain used on the Skye route.[13]

The original engine was acquired by Bailie MacLellan, a Glasgow coachbuilder, as payment for a vehicle he'd supplied to Henry Bell. He used it to drive machinery in his Miller Street works, after which it saw service in a brewery in Greenock; powering looms to make sailcloth; use in a grain mill briefly, then to power a logwood chopping machine; and finally to punch boiler plates. In 1840 the engine re-appears in Glasgow, at the British Association's exhibition of models. In 1857 it was at the Polytechnic Institution's premises in Glasgow, but when the building was destroyed by fire the engine crashed from the third floor to the basement below.[14][15]

The engine disappeared for a while but after a search was found ‘standing in the corner of Mr John Yuil's engine shop, Rutherglen Glasgow ... It is in a very rusty dilapidated condition but appears to be entire.’ [16]

With some difficulty it was then bought by Robert Napier and Sons, who donated it to the London Science Museum in 1862. The elderly John Robertson travelled to London to supervise its re-assembly and the curator of the museum Francis Petit Smith noted that he was ‘as busy as possible erecting his old pet in the museum going about it just as tho he was placing it for the first time in the Comet 51 years ago.’ [17]

A replica of the Comet made by shipyard apprentices now stands in Port Glasgow.