Grace's Guide is the leading source of historical information on industry and manufacturing in Britain. This web publication contains 149,865 pages of information and 235,419 images on early companies, their products and the people who designed and built them. 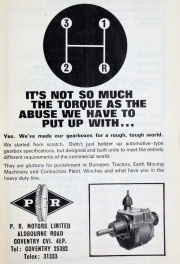 1938 Private company. The Riley car business was taken over by the Nuffield Organisation but Percy Riley and his associates retained control of the Riley Engine Co which they subsequently re-named P. R. Motors.

The original intention was to produce a small car, but the outbreak of war, followed by Percy Riley's untimely death, put an end to this project.

After the death of Percy Riley in 1941, the company began producing transmission components. Percy's widow, Norah Riley, ran the company for many years and was Britain's businesswoman of the year in 1960.

By 1946 the factory was firmly committed to the manufacture of gears and transmissions.

At first, P. R. Motors was best known as a supplier to the motor industry but in the early 50's the company took an entirely new and significant course with the introduction of its first dumper transmission, a "crash" gearbox with fabricated gearcase providing two forward speeds and one reverse, and employing a flat belt as a clutch. An improved version with a cast iron case was introduced later.

Several thousands of these gearboxes were produced, but it became evident that the sliding gears were having a hard time at the hands of strong-armed dumper drivers, and this led to the design of the first in a series of heavy duty gearboxes with constant mesh gears. This was the CM, which first appeared in 1955, and, with modifications, continued in production for some 20 years.

1964 Demand for the new products increased, and in 1964 the No. 2 factory in Earlsdon was acquired.

1966 the Riley family severed its connection with the company when it was acquired by the Charterhouse Group through its subsidiary, Newage Engineers Ltd.,

1974 As the company continued to prosper, and to cater for the increased demand for its existing products and its projected expansion into related transmissions products, a new factory was purpose-built at Barlow Road.

The company built a very close partnership with its customer base which led to the company being the preferred source of drive axles and gearboxes for the British dumper industry. As well as other vehicles produced in the U.K., France, Germany, Switzerland, Austria and other countries. This has resulted in a steady stream of new and improved transmissions, both standard products such as 40M and 85M gearboxes, as well as dedicated products to meet specific customer requirements.

1975 The close relationship with the dumper industry led Newage to acquire Gear Drive Systems and develop a full range of double reduction axles with totally enclosed oil immersed brakes specifically for their needs, although the range was later broadened to general off-highway applications. The same criteria for reliability for which the company's gearboxes are so well known was applied to the range of axles.

1980 Newage's divisional structure was disbanded - P. R. Motors re-acquired the business of the Transmissions Division from Newage Engineers and was renamed Newage Transmissions Limited. In the same year Gear Drive Systems transferred to the Coventry site from Irvine, Scotland.

1984 Newage Transmissions was one of 9 engineering companies subject to a management buy-out from Charterhouse to form a new company, Paragon[2] [3]

1986 September: the company was quoted on the Unlisted Securities Market and became a Plc.

The combination of design, manufacturing and customer application knowledge resulted in the successful range of gearboxes which, supported by high customer service levels, rapidly led to domination of this market sector.

1986 Maker of axles and gear-boxes; British leader in marine gear-boxes; trading in its shares started on the Unlisted Securities Market,[4]

1988 September: Newage Transmissions Plc was acquired by Williams Holdings Plc. leading to a major investment programme to increase the capacity of the company

1991 Brockhouse Transmissions was acquired to increase the product range.

1997 An uprated range of PRM marine gearboxes was launched with the introduction of its first mechanical gearbox the PRM120.

The marine gearbox range was expanded with the launch of the PRM80 and PRM1500 in 1999.

2001 Newage showed its continued commitment to product development by re-designing its range of off-highway rigid drive axles. The new range has a compact modular design providing simplified axle installation, good accessibility and optimum ground clearance, with a new increased range of options and also extending the range to cover vehicles with a payload up to 10 tonnes.