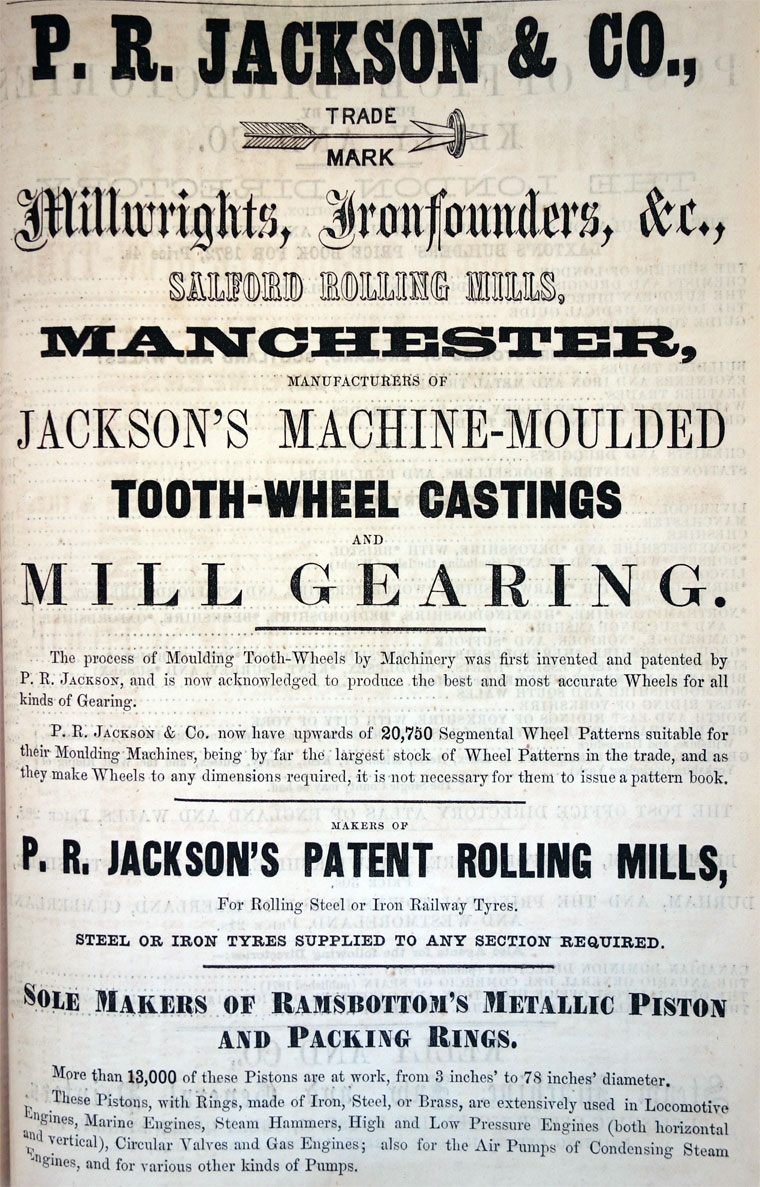 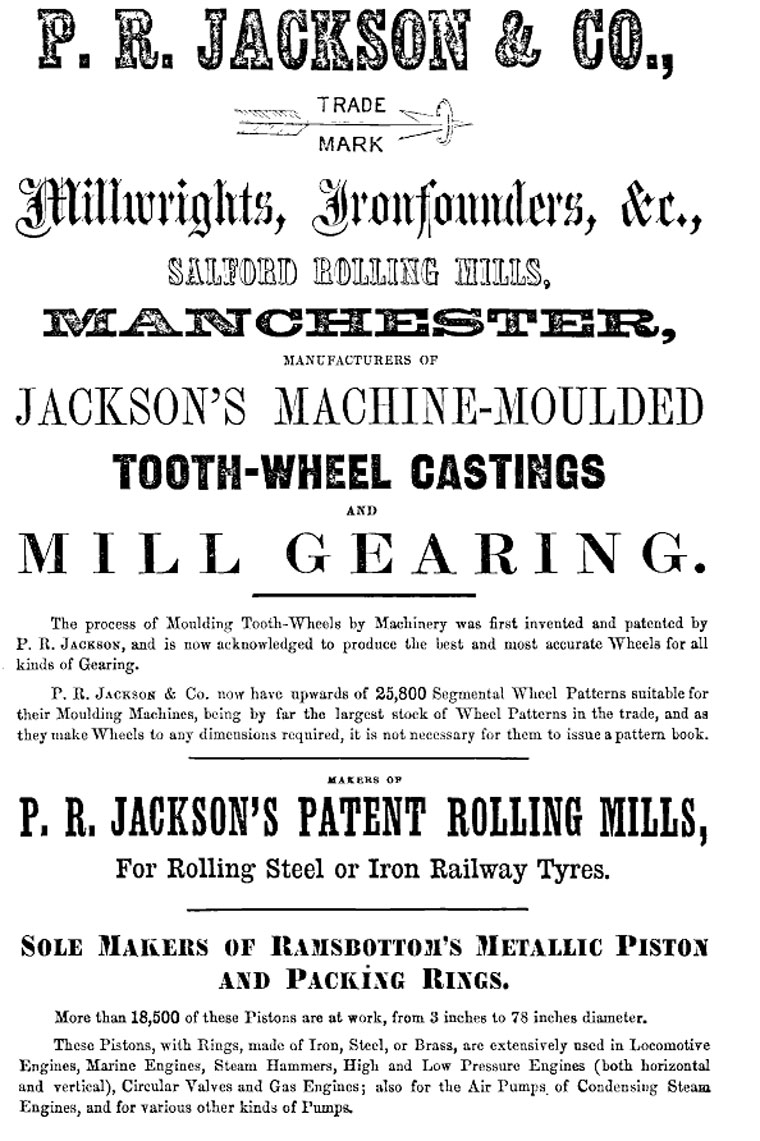 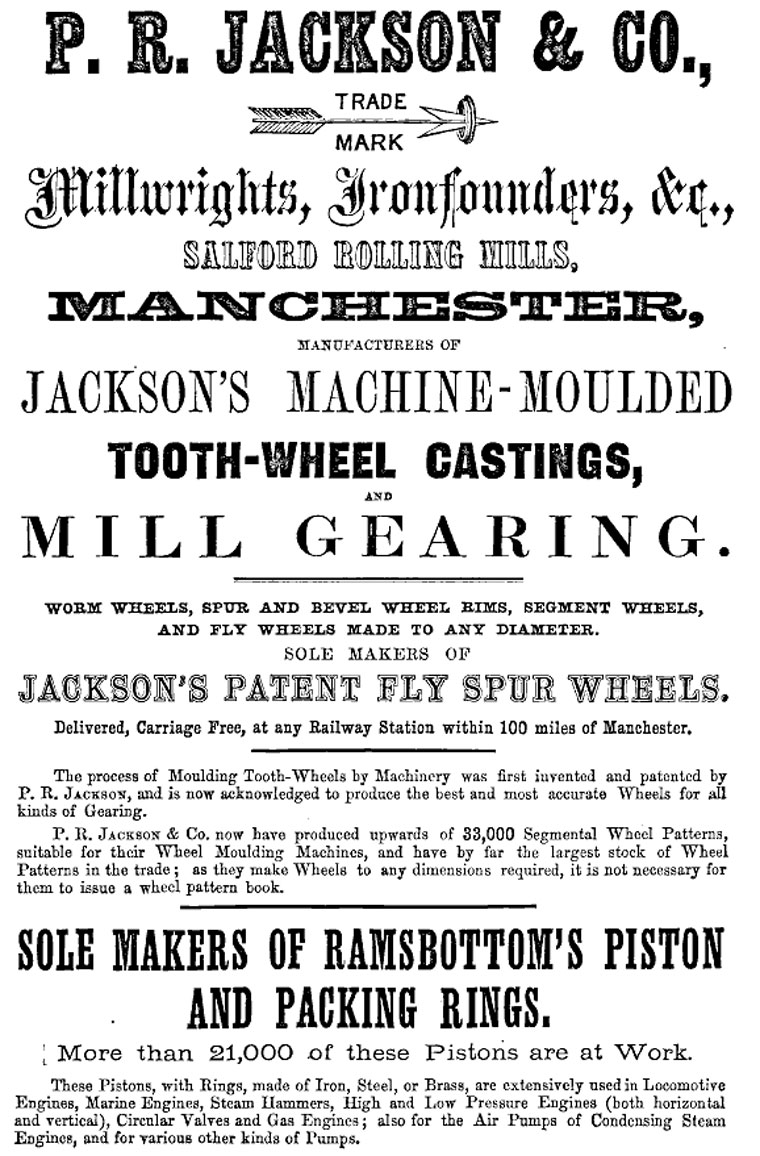 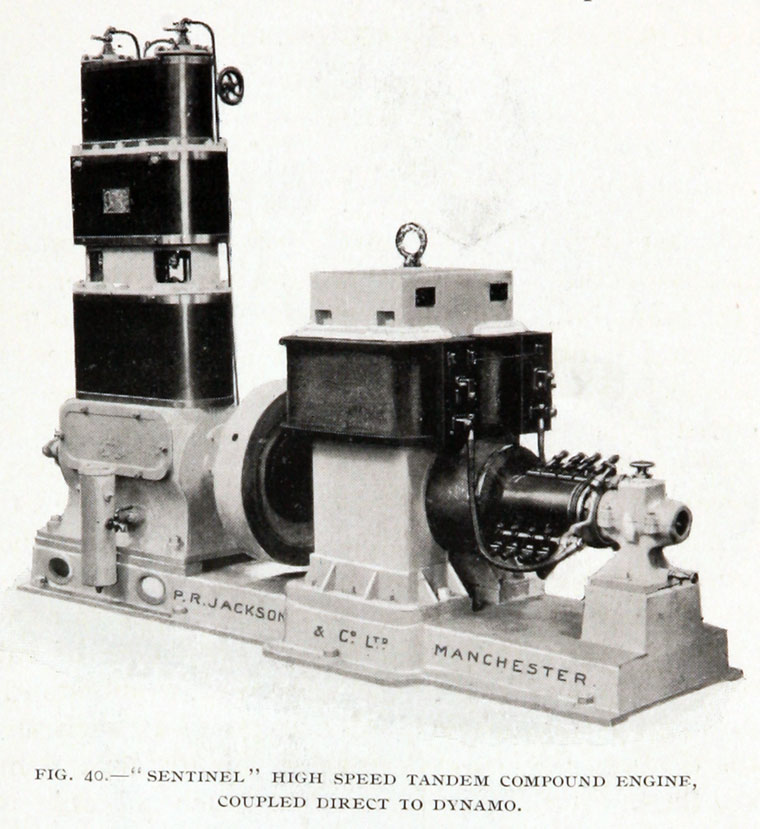 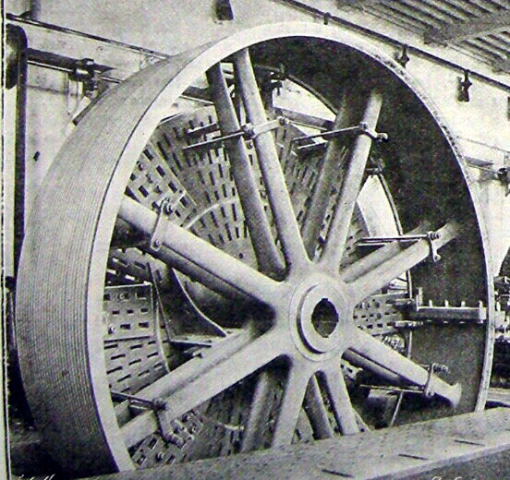 'Rolling Mills' refers to one of Jackson's chief products, equipment for rolling railway tyres, and not to the more common use of the term, i.e. the rolling of metal profiles.

The factory was located alongside the Manchester, Bolton and Bury Canal, with Hampson Street to the south, Oldfield Road to the west, and East Ordsall Lane to the East.[1]

1848 The O.S. map[3] shows a modestly-sized building, in a large yard. The map shows a crane at the north wall of the building, and another crane on the canal wharf. This would allow heavy items to be transhipped to and from the Manchester, Bolton and Bury Canal. A short distance to the east was the River Irwell, reached via three sets of locks.

1854 John Wilson was manager of the mills when they rolled the first steel tyre. Representatives of Krupps were present at the event[4]

1854 'Improved Piston for Steam Engine Cylinders.— Mr. Ramsbottom has taken out a patent for a newly arranged piston, for the licensing manufacture of which Mr. P. R. Jackson, Salford rolling mills, Manchester, is the agent; it is made in one single casting, and has three grooves turned in its periphery, to receive three wire rings, bent about one-tenth of their thickness larger than the bore of the cylinder, and being inserted with the piston, make a perfectly steam-tight joint, and tbe piston is so formed as to obviate changing the cylinder covers. The advantages of this form of the piston over those in general use claimed by the patentee, are lightness, a 15 in. piston weighing only 88 lbs., and if made of wrought iron or brass still less; simplicity, it being made only in four parts; Impossibility of getting deranged, there being no loose portions; less friction than the common piston, great saving of steam, and most peculiarly adapted to locomotive engines, and for work sent to foreign parts, as duplicate rings can be sent out, which can fitted by any attendant on the engine.— Mining Journal.'[5]

1891 The company was registered on 19 September, to acquire the business and properties of the firm of the same name, steel and iron founders and engineers. [6]

1891 Released a catalogue of their Fly and Spur Wheels,&c.; Pistons and Piston Ring Steel. [7]

1894 Recruited Joseph Slater Lewis to equip and start a dynamo-making and electrical engineering department. Lewis was then appointed general manager of the entire business.

1906 Produced a complete railway tyre works for Yawata in Japan. [8]

1911 Produced a complete railway tyre and axle-making plant, including machine tools, for the Derwent Works of the Workington Iron and Steel Company. [9]

1931 Acquired by David Brown and Sons.

The site has now been cleared.