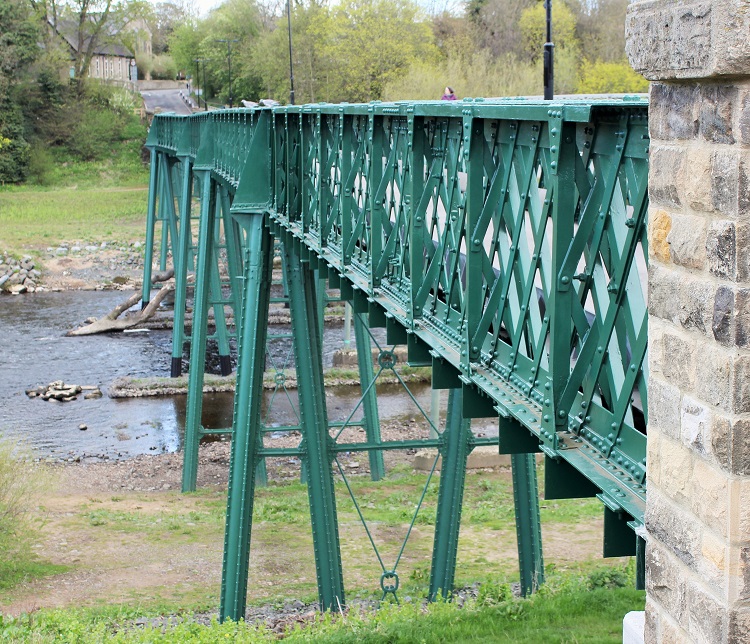 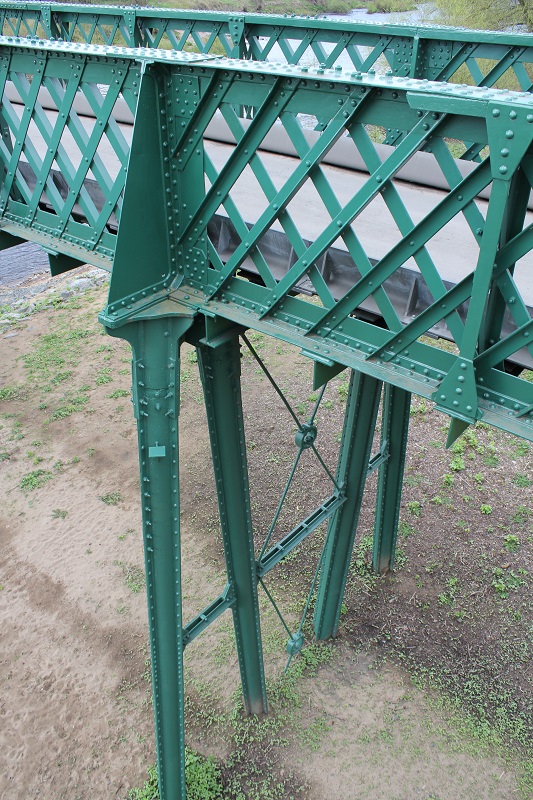 The wrought iron legs are connected to the lattice girders using iron castings. These have different pattern numbers, suggesting that are tailored to the individual legs

The plate for the legs was rolled by Dorman, Long and Co

Crosses the River Tyne between Ovingham and Prudhoe, west of Newcastle.

The legs of the 1883 bridge are of cruciform section, each being assembled from four iron channels with longitudinal flanges. The sections are riveted together at the flanges. The much larger Meldon Viaduct used a similar form of construction, but with the legs assembled from six sections.

1883 'OPENING OF OVINGHAM BRIDGE
PRESENTATIONS TO MR RIDLEY.
Yesterday afternoon, a bridge, erected across the Tyne, between Prudhoe and Ovingham, was publicly opened. Hitherto, the only means of communication between the north and south sides of the river at that part of the Tyne was by means of a ferry boat, and in stormy weather and times of floods the passage across the river was attended with great danger. When the river was flooded it was impossible for carts to pass at the ford from one side of the river to the other and the nearest bridges are at Wylam, on the east, and Bywell, at the west of Ovingham. It would be difficult to say when the erection of a bridge was first mooted, but certainly such a work has been more than once seriously considered during the present half-century; and at last the inhabitants of the district are to be congratulated upon the successful erection and opening of a neat and substantial iron bridge, by means of which they are now ensured uninterrupted communication at all times, and in all weathers, between Ovingham and Prudhoe. In the early part of the present year the Ovingham Bridge Company (Limited) was formed, with Mr J. H. Ridley (of the firm of Messrs Hawthorn and Co., Newcastle) of Wellburn, Ovingham, as chairman ; and arrangements were entered into for the erection of a bridge. On June 21st the foundation stone of the north pier was laid by Mrs Ridley, and from that time up to yesterday, the work has been satisfactory executed. The progress of the work was watched with great interest by the inhabitants, whose enthusiasm was manifested by occasional rejoicings as the various important stages were completed.
The bridge is a neat light-looking structure of wrought iron lattice work, and consists of light spans of 63 feet each, the ends resting on massive masonry abutments. The intermediate supports or piers are wrought-iron columns driven firmly into the bed of the river in sets of four, each set being securely braced together; and on the top of these piles cast-iron caps are fixed upon which the main girders rest. The height of the roadway above summer water level is 25 feet. The total length of the bridge is 530 feet, and it is approached at the south end by an embankment, and at the north end by a cutting.
His Grace the Duke of Northumbberland, as the owner of the land at both ends of the bridge, has given every support and encouragement to the Bridge Company; not only has his Grace given up the ferry, but also has given the land for the approaches to the bridges, and at the north side is widening and improving the road leading past the eas tend of Ovingham Church to the bridge. Sir Hubert Laws, M. Inst. C.E., Newcastle, has been the engineer for the undestaking; Messrs Wilson Brothers and Co., Alliance Works, Darlington, were the contractors for the iron work; Mr Wm. Wilson, Gilsland, was the contractor for the mason work; and Mr Macfarlane, Newcastle, was the sub-contractor, under Messrs Wilson, for the erection of the iron work.
At one o'clock yesterday afternoon the bridge was publicly opened in the presence of a very large number of people.

'Several efforts bad been made to get a bridge erected, and ultimately, on February 12, 1883, a company was registered with limited liability for the purpose of erecting a bridge, and all the shares were taken up almost before the prospectus was issued. The bridge was now open for traffic, and the shareholders would be extremely glad to see a very great deal of traffic along the bridge. The company were fortunate enough to secure the services of Sir Hubert Laws as engineer, and it was a matter of great congratulation that they were able to employ a local man. (Applause.) It must be a source of gratification to Mr Laws that he had been the engineer of the only two bridges which had been built across the Tyne between Newcastle and Hexham for many years past. He proposed the health of the engineer and contractors.-. Sir Hubert Laws said it was precisely six months that day since they met together to celebrate the laying of the foundation-stone of the bridge; and, although the bridge had been built in six months, the people in the district had been nearly sixty years in making up their minds to have it. When he, as engineer, received his instructions, be resolved to do the best he could to provide a suitable bridge, and suitable to the pockets of the shareholders. He did not think, from an engineering point of view, there was anything to be ashamed of in the bridge; in some respects it was unique. He did not think there was another bridge in the kingdom had such a foundation Having spoken highly of the strength of the bridge, he stated that the railway bridge at Wylam was designed by his brother, who was now City Engineer at Newcastle ; but its erection was carried out under his (Mr Hubert Laws) charge. - George Wilson (Darlington) also responded, and said that several engineers saw the bridge when being constructed at Darlington; it was the first of the kind they had ever seen, and they looked upon it as a great success. .....'[1]

Note: A few yards north of the bridges is Ovingham Parish Church, where will be found the graves of Isaac Jackson and Thomas Bewick.

Bywell Bridge is 2.5 miles to the west and Wylam Bridge and the birthplace of George Stephenson are approximately 2 miles to the east.