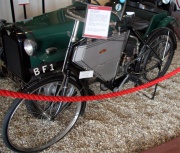 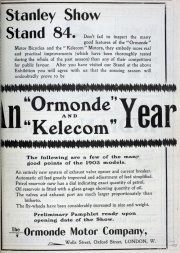 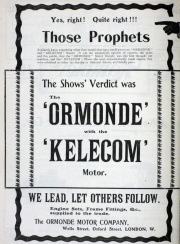 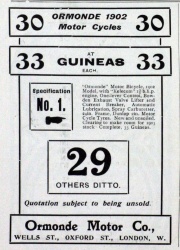 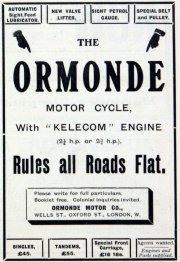 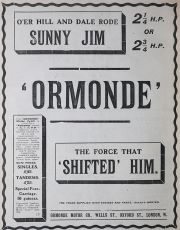 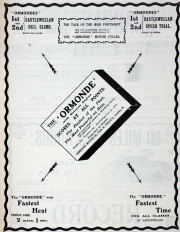 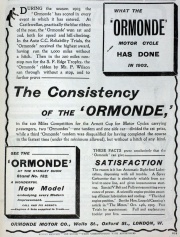 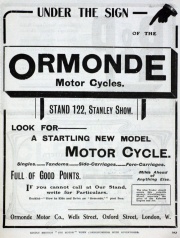 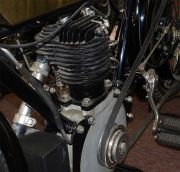 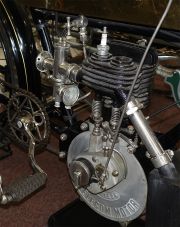 1900 The machine was a primitive fitted with a Belgian Kelecom or Antoine engine that was tucked into the space between the seat tube and the rear mudguard. The result was a reduction in the belt centres and enhanced belt-slip. The spark-plug was placed very close to the rider's thigh.

1904 The engine position was moved to be more conventional, upright and central within the main frame loop, for the 3hp or 3.5hp Kelecom engine. They also introduced a belt drive fitted with cross pins to engage with grooved cut in the engine pulley. Tandems, forecars and trailers were all listed along with the solos. Some had fan-cooled engines. Kelecom and Ormonde merged, but failed before the end of the year.

1904 April. Fire. 'A telegram has been received stating that the London premises of the Ormonde Motor Co. have been the scene of an alarming fire. A quantity of motor cycles intended for Easter use have, it is, stated, been destroyed. The Central News says a destructive fire broke out on Saturday afternoon in the large premises in Wells Street, West, London, occupied by the Ormonde Motor and Cycle Company. When the firemen from Great Marlborough Street and Manchester Square arrived a fierce fire was discovered to be raging in the basement, and to be rapidly spreading. Several hydrants were got to work, but the outbreak assumed such serious proportions that a "district call" was sounded, and firemen from many west-end stations turned out before the flames were overcome. About one-half of the basement and its contents were seriously damaged by fire and heat, while the remainder of the basement and contents suffered injury from smoke and water. The ground floor and stock there were slightly damaged by fire, heat, smoke, and water, and the upper part of the building by smoke. The upper floors are occupied by the Sketch Club and by the Old Punch Bowl Club, but the firemen managed to confine the outbreak to the lower part. It is supposed the fire was started by the vapour of spirit coming in contact with a flame and the damage to Ormonde Company's stock, which is considerable, cannot yet be ascertained.'[2]

1904 The assets were bought by Taylor, Gue, who had been making their frames.

A year later they made their own machine and in time that became the Velocette.