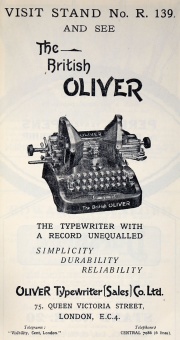 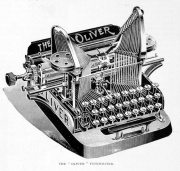 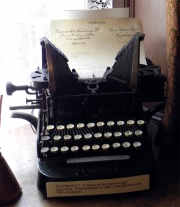 Oliver No 1. Produced from 1894. Exhibit At Beck Isle Museum.

Oliver No 5. Exhibit at the Museum of Bath at Work‎. 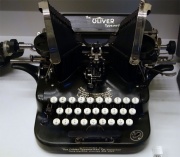 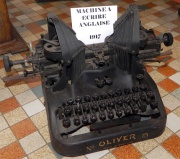 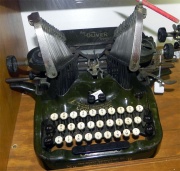 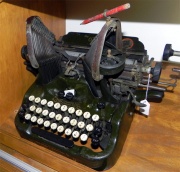 1852 Thomas Oliver was born in Woodstock, Ontario, Canada, on 1 August. Having become interested in religion, he moved to Monticello, Iowa, after the death of his mother, to serve as a Methodist minister. During that time he designed and developed his first typewriter, made from strips of tin cans, as a means of producing more legible sermons.

1891 He was awarded his first typewriter patent, on 7 April. Oliver resigned his ministry and moved to Epworth, Iowa, where he found investors willing to provide capital, and leased a building in which to manufacture his machines.

While visiting Chicago to promote the machine, Oliver encountered businessman Delavan Smith, who became interested in the typewriter and bought the stock held by the Iowa investors. Oliver was given a 65% interest in the company and retained to continue development of the typewriter, at an annual salary of $3,000.

1895 The Oliver Typewriter Co had begun operating with its headquarters on the ninth floor of a building in Chicago.

1896 Manufacturing moved from Iowa to Woodstock, Illinois, when the City donated a vacant factory on the condition that the Oliver Typewriter Company remain there at least five years. Manufacturing was divided into six departments: type bar, carriage, assembly, tabulators and adjustment, inspection, and an aligning room. The company's headquarters moved to the Oliver Building when it was completed in 1907.

1899 The company established sales networks by encouraging customers to become local distributors. This method of marketing relied on word of mouth and emphasized sales made directly door-to-door and, after 1905, sales on credit.

1910s In response to increased competition the company eliminated its network of local salesman and used the resulting savings in commissions to reduce the typewriter's $100 price by half. Sales increased and, at its peak, the company's labour force of 875 was producing 375 machines daily.

In addition to its offices in Illinois, the company had branch offices in Baltimore, Buffalo, Cleveland, Kansas City, Minneapolis, New York City, Omaha, St. Louis, San Francisco and Seattle, all of which closed when Oliver shifted to mail order sales in March 1917.

1921/22 A minor recession caused a large number of customers to default on their payments, resulting in the repossession of their typewriters.

1926 The company opted not to borrow money and the board of directors voted to liquidate the company. Only one employee, Chester Nelson, was retained to oversee the company's liquidation.

1931 Production of Oliver’s original, three-rowed keyboard design was discontinued when the company began to produce a re-branded model of the “Fortuna” typewriter, a four-rowed German design.

1935 The company began to produce the Halda-Norden standard typewriter, another licensed design (Model No. 20). The company, however, had to retool its machines and return to the original Oliver design when the British government placed large orders for the three-rowed model at the outbreak of World War II.

1958 Oliver purchased the Byron Typewriter Co, previously the Bar-Lock Typewriter Co, of Nottingham. The licensing ventures were ultimately unsuccessful, and the company's machine tools were transferred to a factory in Germany.

1959 Production of all Oliver typewriters ended in May.