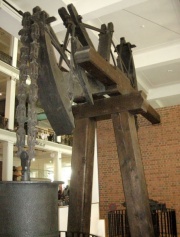 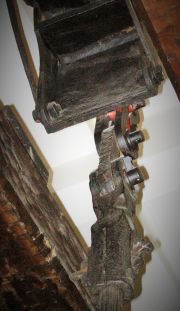 This shows the connection between the piston rod and the chain. The forged crosshead has a split shank and is fixed to the rod by a three piece tapered cotter. The photo also shows the cast iron arch head which guides the chain

'Old Bess' is a an early Watt-type engine whose remains are displayed in the London Science Museum.

Matthew Boulton had located his Soho Manufactory to take advantage of the availability of water to drive his waterwheel-powered machinery. However, he needed a more reliable supply, and conceived the idea of using a steam engine to return water to the reservoir after it had driven the waterwheel.

In 1774 James Watt joined Boulton and relocated his experimental beam engine from Kinneil to the Soho Manufactory, where it would be used to pump water back to the reservoir. The block tin cylinder was replaced by one of cast iron from the Wilkinsons' foundry at Bersham.

In the summer of 1777 the 18" cylinder was replaced by one of 33" bore, working expansively, the first engine designed to do so. It acquired the nickname 'Beelzebub' for the violence of its action. It sustained some damage when the engine house caught fire in 1778. In 1797 the wooden beam was replaced, retaining the old ironwork, and the pump barrel was rebored.

It is believed that this engine, modified over the years, became 'Old Bess', a belief supported by the unusual cylinder dimensions recorded for Beelzebub being substantially the same as those measured on Old Bess. A former employee recounted that the engine worked at Soho from 'about 1771 to 1848', when it was sold by auction following the ending of coining at the Soho Mint. It was bought by a Mr Lewis, who sold it to Samuel Walker, a metal roller at Heath Mill (Samuel Walker, Junior?), who placed it in front of his works on an island in Derrington (Deritend?) Pool near Birmingham. It was eventually sold to Branson and Gwythen, Contractors, of Birmingham, who later sold it to the Commissioners of Patents for the Patents Museum. [1]