Grace's Guide is the leading source of historical information on industry and manufacturing in Britain. This web publication contains 140,577 pages of information and 227,382 images on early companies, their products and the people who designed and built them. 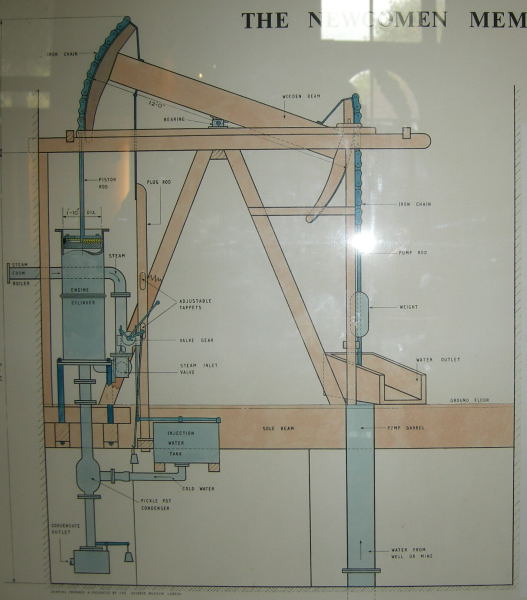 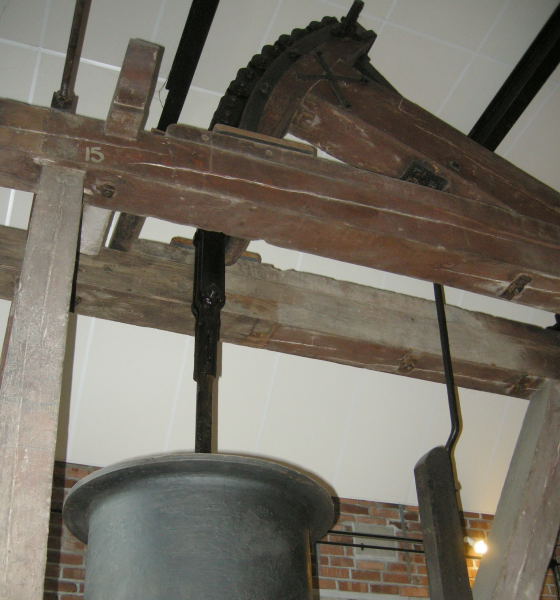 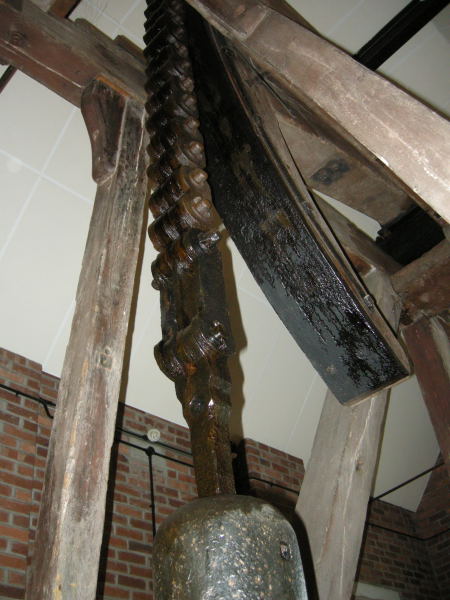 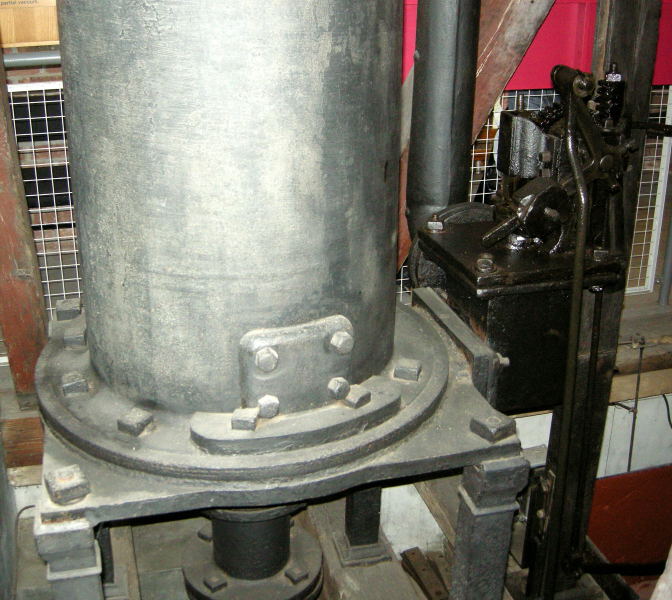 The steam admission valve is housed within the square chest. The valve is opened by raising the valve spindle by means of a pinion acting on a rack on the spindle. The pinion is rotated by the long horizontal lever - manually to start the engine, and then automatically by a pair of tappets attached to the wooden rod, which rises and falls with the rocking beam. The pinion also acts on another rack to open the water injection valve when the steam valve is closing 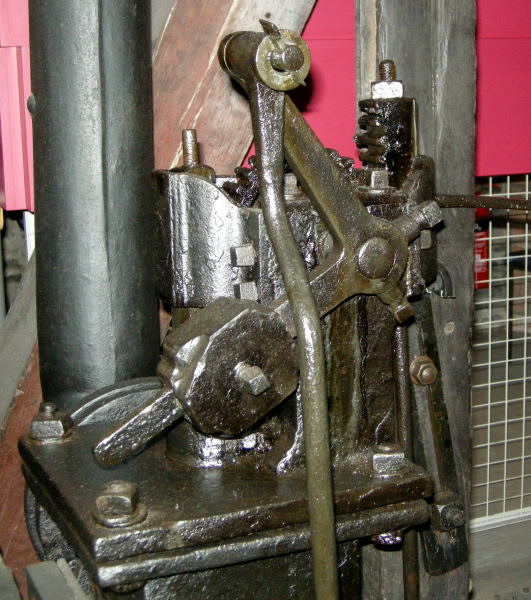 The bent rod suspends a weight. The bell crank is weighted to overbalance so as to ensure positive opening and closing of the valve 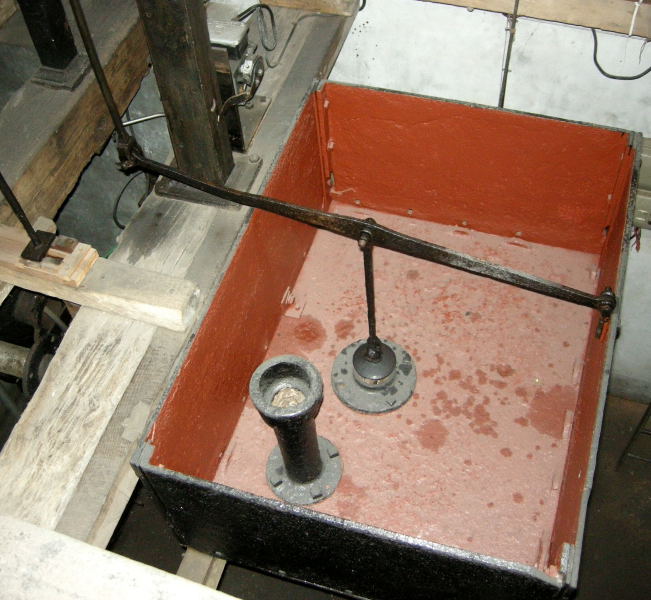 Water injection tank with injection valve and overflow. Water form here enters the cylinder to condense the steam to allow atmospheric pressure to force the piston down 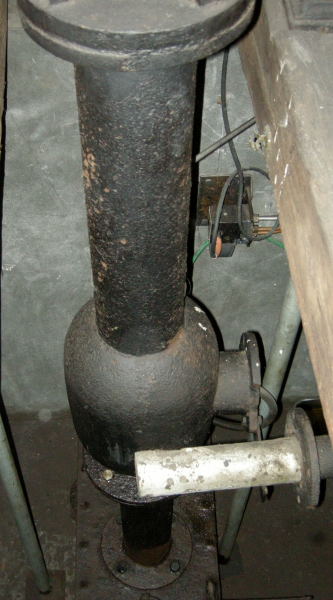 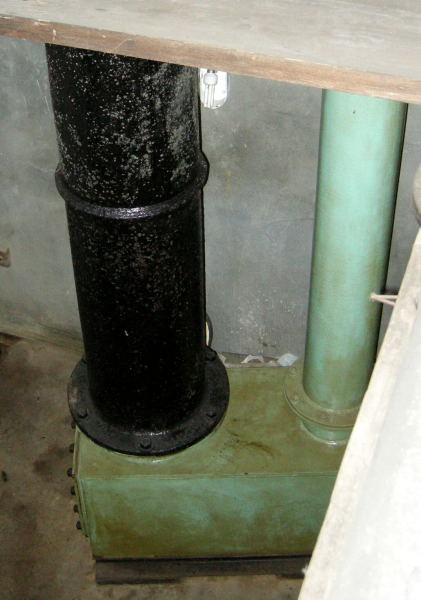 The black 'pipe' is a section of the original pump barrel

The Newcomen Memorial Engine can be seen in Dartmouth, home of Thomas Newcomen, at The Engine House, Mayors Avenue, Dartmouth, Devon, TQ6 9YY.

For more information and a map, see the 'Discover Dartmouth' Newcomen Engine webpage, which describes the engine as the oldest preserved steam engine in the world.

It was originally built c.1725 to pump water out the Griff Colliery in Staffordshire. It was moved to a coal mine at Measham, and in 1821 it was bought for use at Hawkesbury Colliery, Warwickshire and worked there until 1913. In 1964 it was reassembled in Dartmouth, the home town of its inventor, by the Newcomen Society.

The Dartmouth engine shows most of the features of the earliest Newcomen engines. It has a simple, untrussed, wooden beam with arch heads, chain connections and wooden spring beams. The current steam valve and water injection mechanisms apparently date from 1821, and are activated automatically by a plug-rod, as in the early engines. Another change was the provision of a separate ‘pickle-pot’ condenser, fitted directly beneath the cylinder. The engine can be operated by a hydraulic mechanism to demonstrate the motion of the engine and the operation of the valves.