1758 map from Monmouth Museum, reproduced on Wye Valley 'Hidden Industry' display board at the site 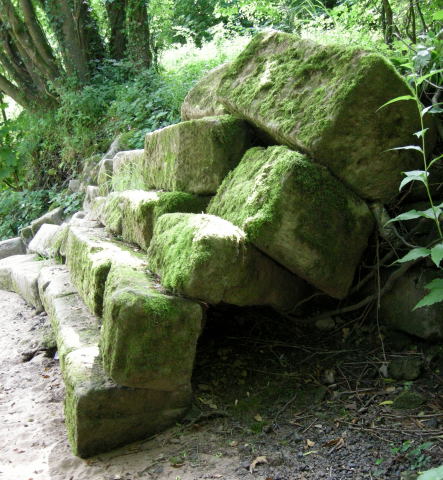 At the foot of this wall is a part-buried arch - see following photographs. Burnt material to the right

Top of the arch referred to above

Photograph taken by passing the camera through the arch. Two further arches can be seen. Culverted tailrace? Aligned parallel to the river

at Symonds Yat (West) on the River Wye in Herefordshire

There had been a weir at this location from time immemorial. It was damaged by ice and was rebuilt in the late 17th century, and then leased to George White who built a forge for refining pig iron to produce wrought iron. A contemporary report said that this was built on an old foundation (of a forge?) and had three chaferies or fineries and two hammers. The water supply from the River Wye allowed work to be carried on throughout the year. An Act in 1695 required all weirs on the Wye to be demolished to allow navigation, but New Weir was excepted on the condition that a lock was built at the owner's (Duke of Kent's) expense. George White died in 1729 and the business was carried on by his son George. On his retirement in 1753 the site was leased to John Partridge of Ross-on-Wye. At this time pig iron was brought by boat from Tintern and Carmarthen. The forge closed in 1794, and in 1814 the weir was damaged, after which the remains and the buildings were demolished.[1]

The forge was probably established in the 1570s by the Earl of Shrewsbury[2]. Referring to the photo of the 1758 map, note the weir, and the lock at the upper (eastern) side of the river. The building E is the Slitting Mill, D is the Forge, and C is Mr Partridge's house.

In recent times the site was cleared of trees and undergrowth. Nature is keen to reclaim the land, but great efforts are made to keep paths clear. Remains of furnace can be seen, together with the rough stone walls of buildings, whose width shows that these buildings were quite substantial. By the riverside can be seen extensive walls made to a good standard with large dressed sandstone blocks. There is a wide variety of forms of slag on the sandy river bank, including distinctive green glassy material and some fairly large solid deposits in the river bed.

As at many historic sites in the Wye Valley, an excellent information board has been provided.

Visitors wanting to explore the ruins should be aware that paths will be slippery in places and that nettles and brambles will be encountered.